"While terms like 'Mutant' may conjure up images of a disgusting slime beast crawling from a radioactive pit, the Mk47 is anything but."

Few debates have been waged more vigorously than that of the superiority of the AR versus the AK. Each side of the argument has staked its position, and both have dug in like defenders of the earth preparing for a last stand against an invasion. 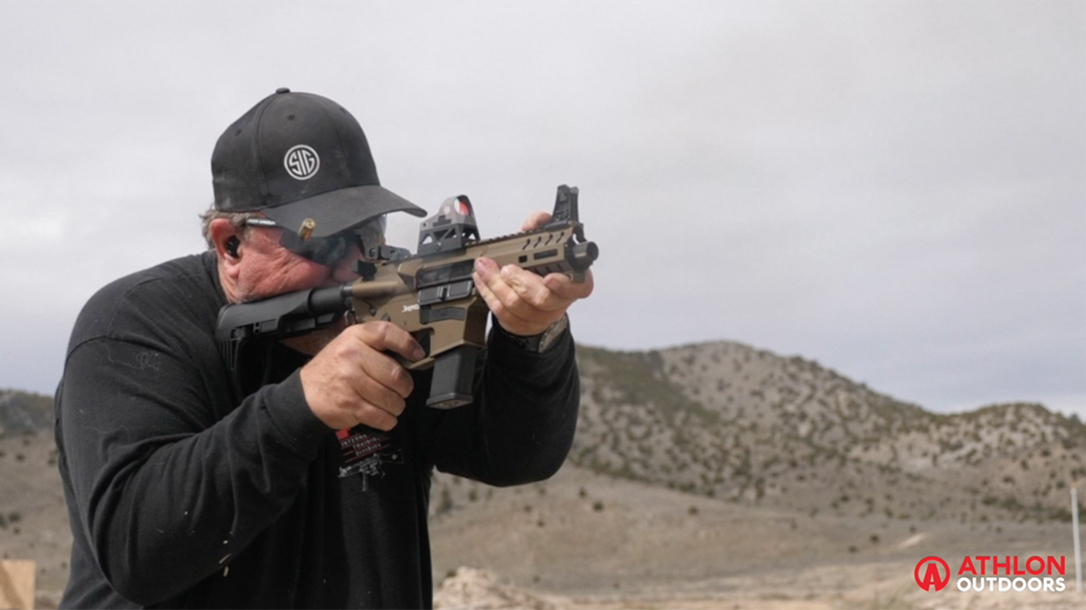 Both platforms have proven to be excellent performers when playing to their strong points, yet neither can be universally declared the best combat rifle for all missions and in all environments.

One might wonder what would happen if a company created a modern mashup of the two rifles. Could a new champion be made from the parts of the two existing contenders? That’s the exact question CMMG seems to answer with the Mk47 Mutant rifle.

Regardless of your preferred science-fiction metaphor, the Mk47 clearly draws design inspiration from the bodies of existing AK and AR rifles. At first glance, the casual shooter might simply assume this was another AR-15; certainly the charging handle, stock, pistol grip and rail all look the part. But the large, curved AK magazine sticking out of the cut-down mag well will make even an inexperienced enthusiast take a second look. At that point, they will likely see the paddle magazine release and begin to wonder what kind of sorcery they may be looking upon.

While terms like “mutant” may conjure up images of a disgusting slime beast crawling from a radioactive pit, the Mk47 is anything but. The fit and finish on my test gun were top notch, looking and feeling exceptional. This is not some patchwork assembly of parts to make a forlorn monster like in a 1930s Boris Karloff matinee. Rather, each part appears to be carefully selected to provide the top performance modern shooters demand.

The heart of any rifle is the receiver. For the Mk47, CMMG designed a new mid-sized receiver that is based on the company’s .308 Wincester Mk3 platform. Both the upper and lower are machined from 7075-T6 aluminum. Paired with the new receiver design is a heavy-duty bolt, based on the .308 bolt that is used in the Mk3 platform. The length has been reduced to 8 inches, but it retains all of the thickness and durability of the Mk3 bolt. Like the standard AR-15, the Mk47 is a direct-impingement gun.

At its introduction, the Mk47 Mutant shipped in three different configurations: the T, AKM and AKM2. All three rifles have free-floating, 16.1-inch barrels and a CMMG RKM15 KeyMod handguard. The barrels have a medium-profile configuration with a 1-in-10-inch twist rate.

None of the rifles ship with sights, iron or otherwise. However, the entire top of the rifle is festooned with a Picatinny rail, so adding one is a truly simple process. I added both iron sights and glass while at the range.

CMMG ships the Mutant with a single Magpul AK-type 30-round PMag. The rifle should also work with any standard AK magazine. Although I’ve always had good luck with military-surplus magazines, there is the possibility that some surplus magazines are made too far outside of the normal dimensions to work properly. Chances are those same magazines would cause you problems in most AK-type rifles and should be dumped in the nearest trash bin. Quality AK magazines—both new and surplus—are readily available.

CMMG backs the Mk47 Mutant with a lifetime guarantee that protects against material and workmanship defects. You never buy a rifle expecting to need the warranty, but it’s better to have a good one should anything ever go wrong.

Since the initial introduction of the Mk47, the platform has evolved to include pistol and short-barreled rifle (SBR) options. The SBR variant ships with the same furniture as my evaluation rifle but chops the barrel length down to 10 inches and matches a 9-inch KeyMod handguard to it. While an NFA tax stamp will be required to transfer this rifle, the clear upside is the ability to maneuver it better in tight spaces.

Dropping half a foot from the overall length makes this rifle an even more attractive car and home defense gun. Additionally, the handguard is specifically designed to work with sound suppressors. With a short barrel and a can, this could be an exceptional CQB rifle for someone wanting to run 7.62x39mm ammo.

Like any great sci-fi movie, the real fun begins when the shooting starts. While it is important to go over the gun prior to heading to the range, nothing beats pulling the trigger. It’s only then that you can truly see if the gun is a beast or just a scientific experiment that should have died in the lab.

Since the Mk47 ships without sights, the first order of business was to install some. For my testing, I added a set of XS iron sights that included the company’s famous famous 24/7 stripe front sight with a tritium insert. I also shot the rifle with a 1.5-4x20mm Leupold Mark AR MOD 1 scope. Neither affected the reliability of the gun, but the Leupold scope did give me more precise groups at 100 yards.

The Mk47’s reliability was outstanding. Running the gun with a variety of newly manufactured ammunition resulted in exactly zero malfunctions. From steel-cased Wolf Military Classic rounds to the exceptional Winchester PDX1 Defender load, the gun cycled everything I ran through it. Likewise, the grab bag of military-surplus magazines I had with me all fit and ran as well as the brand-new Magpul PMAG that was included with the rifle. While the operating system is vastly different from the AK, the gun nevertheless ran as reliably.

Like an AK-style rifle, the magazine release is a lever located behind the rear of the magazine. Pushing the lever forward will allow you to remove the mag from the well. Fresh mags are seated by hooking the forward edge of the magazine in the well and then pivoting the mag home. There are a variety of methods that can be used to increase your speed when changing AK mags, and each method has its strengths and weaknesses. While my training and experience makes me faster with a standard AR-15, I was able to build proficiency and speed quickly with the Mk47 Mutant. Shooters who already have a high degree of skill with the AK platform will likely take to the Mk47 quickly.

My sample rifle’s accuracy was very good. With the Leupold turned up to 4X, I put several five shot strings into 0.75-inch groups. More often, my group sizes were about 1 to 1.25 inches. This was on an outdoor range with a light crossing wind.

Both Winchester and Hornady rounds managed sub-1-inch groups and are loads I would consider for serious work. I’ve seen ballistic testing of both bullet designs, and each impressed me. While the choices for good hunting and personal-defense ammo are more limited for the 7.62x39mm than they are for the 5.56mm NATO, the Hornady SST and Winchester  PDX1 Defender get top marks from me.

Unloaded, the Mk47 weighs about 7.2 pounds. A lot of that weight is forward of the magazine well. This creates a rifle that is front-heavy. Whether that is good or bad is up to you. While the balance point of the gun adds additional stress to the support arm, it does help soak up muzzle rise when shooting. Combining the forward weight with the company’s SV muzzle brake, the recoil and rise were pretty mild. 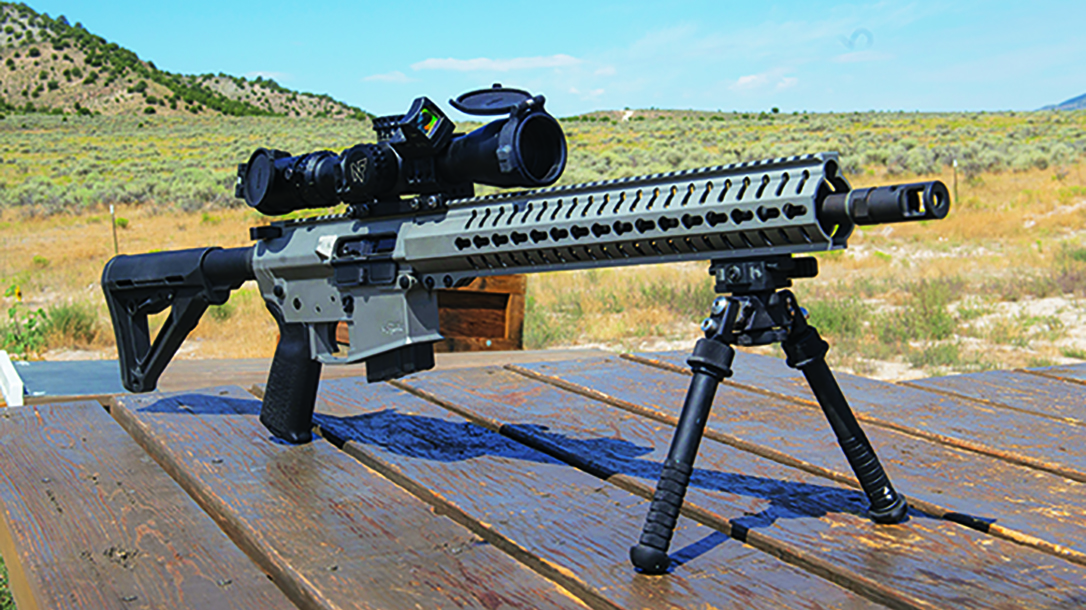 What are my takeaways from my time with the Mutant? My primary concern about any firearm was laid to rest during testing: It is a reliable rifle. With all kinds of magazines and ammunition, the Mk47 feeds, cycles and puts rounds on target. And with good ammunition, that target can be quite small.

While some of the old guard in both the AK and AR camps will see the CMMG Mk47 Mutant as an act of high heresy, I like the gun quite a bit. Until the pulse rifle from “Aliens” is available for dispatching some nasty horde, I’ll gladly take an Mk47 Mutant with a case of surplus mags.