"The QRB is also equally at home on a heavy-barreled precision AR rifle that you plan on stowing in a short rifle case. This system is that versatile."

So-called “quick-change” AR barrels have been the all the rage in the gun world for some time. They make sense. If a barrel can be changed by the end-user to a different caliber, for example, without having to buy a separate upper component, there is certainly a benefit. But not all of these systems are alike.

If a barrel can be swapped in the field, it may or may not be a quick-change setup. That may be just fine as long as time is not an issue. If a barrel needs to be changed for another because it’s hot, as with a machine gun in combat, then it needs to be changed quickly. What’s the time requirement here? I’d say no more than 30 seconds, but conditions would dictate. 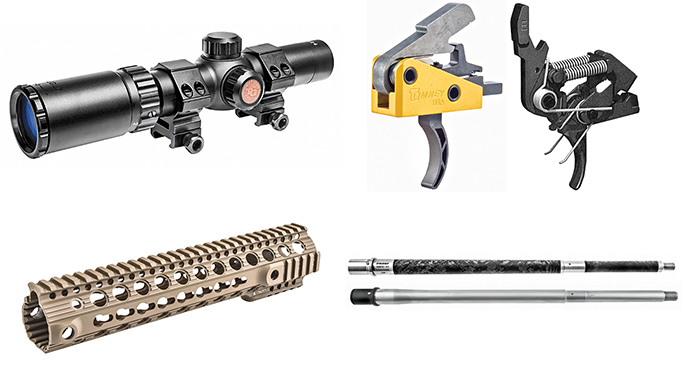 What about merely assembling an AR that has the barrel removed in order to be stored in a small package? This would include the entire gun and at least one loaded magazine, with vehicle or home storage coming to mind here. If you’re a law enforcement officer responding to an emergency call with your gun so stored, time is of the essence. The same would be true in defending your home. Now what’s the time requirement? What about the rifle’s accuracy and point of impact?

Will changing a machine gun’s barrel bring about a different point of impact from where the original barrel was shooting? You bet. But since it’s generally an “area weapon,” it may not make much of a difference. Not so with a precision or infantry rifle.

Now there is at least one system out there that allows you to swap barrels in about 30 seconds while providing superb accuracy and a return to zero. It is the Quick-Release Barrel (QRB) kit from Cry Havoc Tactical of North Carolina.

With this kit, the barrel assembly, including the gas tube, is semi-permanently attached to the handguard group via a forward coupler. In other words, the upper and lower receivers are left assembled, and the barrel/handguard group is a separate component. It’s doubtful that you would ever need or want to change the barrel used with the QRB quickly, but when it comes to assembling the barrel group, the QRB is in a class by itself.

I’ve watched a video of the designer of the QRB pick it up, assemble it, insert a loaded magazine and fire the complete rifle in just four seconds. I’ve been able to do this once or twice in seven seconds, but mostly in 10 seconds. Impressed yet?

The QRB can be had as a complete upper to fit any mil-spec AR-15 or M16 lower receiver using approved parts of the customer’s choosing. Or, the components can be fitted to the customer’s existing mil-spec barrel/receiver group. Here’s how it works.

The system utilizes front and rear hardcoat anodized 6061-T6 aluminum plates. The rear plate, called the “receiver plate assembly,” is secured to the upper receiver by the special QRB nut. Cry Havoc Tactical calls this the barrel nut, but it only locks the rear plate to the receiver with the modified gas tube extension locked behind it. The tube extension will mate tightly with the shortened gas tube when assembled.

With everything aligned, a master locking bolt in the barrel plate is tightened after LockTite 242 is applied. The two locking flaps are adjusted with bolts per the instructions, also using LockTite. The QRB system separates the receiver and handguard by 1.40 inches, but the barrel remains in its original position.

My build sported a 13-inch, carbon-fiber M-LOK from Faxon Firearms as well as one of the company’s 16-inch pencil barrels. Both were easy to install in the Cry Havoc upper receiver. The 16-inch barrel protruded just 0.85 inches from the handguard. Faxon also offers this barrel in a 10.5-inch length. This handguard is also smooth and comfortable while providing unlimited accessory-mounting options. The upper also came with a titanium SLR Rifleworks gas block that can be adjusted using a long 2mm hex wrench.

As for accuracy, Cry Havoc Tactical claims repeatable 0.5-inch groups at 100 yards with a match-grade barrel and ammunition. Anxious to see what my combination would do, I installed my upper on a Bravo Company Manufacturing (BCM) lower receiver and mounted a 3-10x42mm Leupold Mark 4 scope.

After getting on paper at 100 yards, I tested the rifle with three different types of .223 Remington ammunition. The QRB produced five-shot groups ranging from 0.73 to 1.74 inches. Then I removed the Leupold and installed a Vortex Razor red-dot sight. This allowed me to get 3-inch groups at 100 yards as daylight began to fade a little. While the BCM-issued trigger is quite smooth with a 7.8-pound let-off, a better trigger would help improve the rifle’s accuracy even further.

What about repeatable accuracy? Removing and replacing the barrel showed no perceptible change in the point of impact. Of course, I didn’t have another barrel/handguard assembly to test at the range. This is significant because you can keep one optic zeroed on top of the upper for multiple barrels.

My QRB kit came with Cry Havoc’s titanium muzzle brake. It’s quite efficient but loud. I replaced it with my titanium Gemtech Trek-T suppressor (covered in a Manta wrap) for ear-safe shooting and readjusted the SLR gas block. No malfunctions occurred throughout more than 180 rounds. Some of this shooting was also done in full-auto using my registered M16 lower receiver group. Which brings us to another new product.

I’m lucky enough to live in a state that allows high-capacity AR-15 magazines, including 60-round drums. So, I tested the QRB with Magpul’s D-60, which has surpassed all of my expectations. Not only does it protrude from the bottom of an AR as much as a standard 30-round magazine, but it has also never failed me, even when left fully loaded for a year. 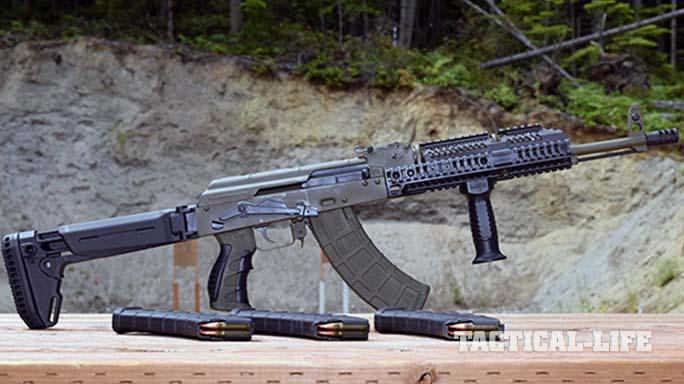 Using a finger-operated lever to depress the follower, the D-60 can be loaded one at a time or with a military AR-15 charging guide and chargers. It can also be disassembled for cleaning if necessary. There is even a window to count your remaining rounds. The D-60 is accordingly heavy, but there can be times when it is advisable to have more ammunition on the gun than in pouches. For that extra weight, adding a good sling is wise. I attached a Blue Force Gear Victory sling to the BCM buttstock, but there was no sling mount on the Faxon handguard, so I used one of Blue Force Gear’s ULoops.

While the Vortex Razor red dot worked fine at the end of the handguard, I repositioned it closer to the receiver and mounted a Magpul M-LOK rail just to the left and down from it. There I attached a 1-inch-adjustable ring to hold a SureFire G2 light with the pressure switch in line with my left thumb.

For those who want MOA accuracy from a carbine that can be kept in a tiny container and be ready for use in seconds, Cry Havoc Tactical’s QRB is here. The QRB is also equally at home on a heavy-barreled precision AR rifle that you plan on stowing in a short rifle case. This system is that versatile. And did I mention that a .308 version is also available?

*Bullet weight measured in grains, velocity in fps by chronograph and accuracy in inches for five 5-shot groups at 100 yards.