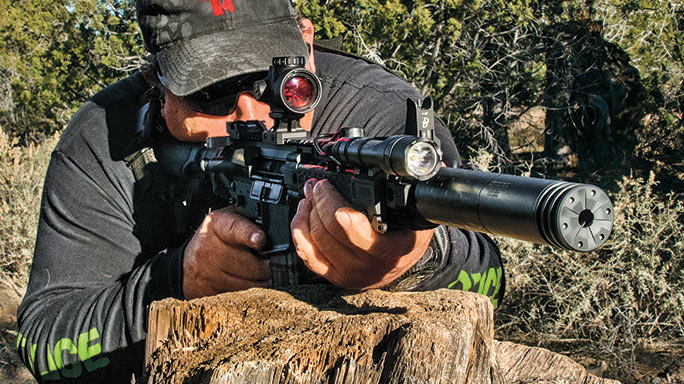 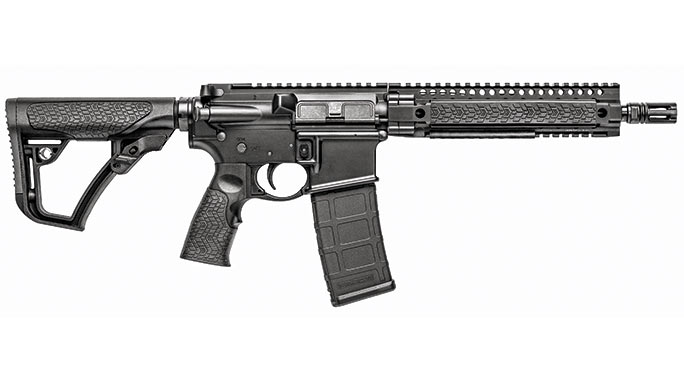 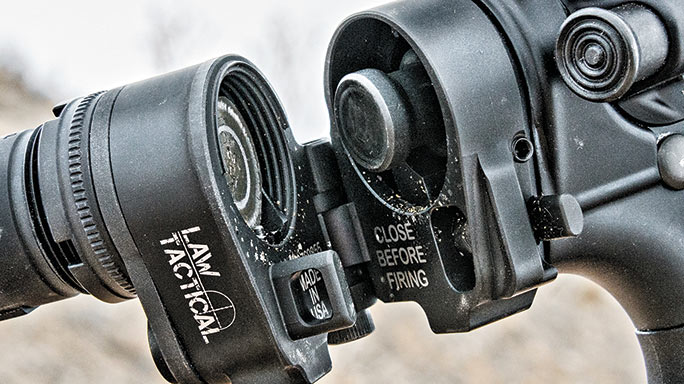 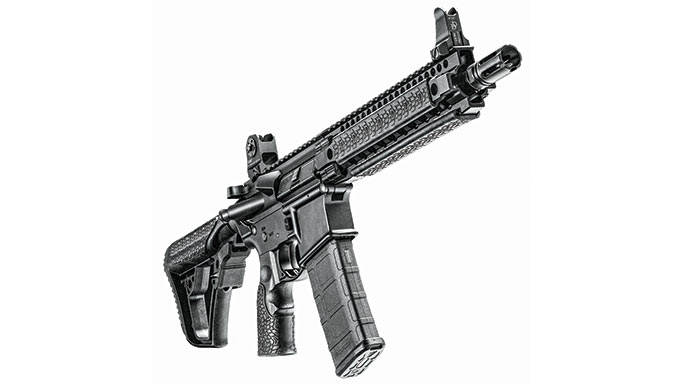 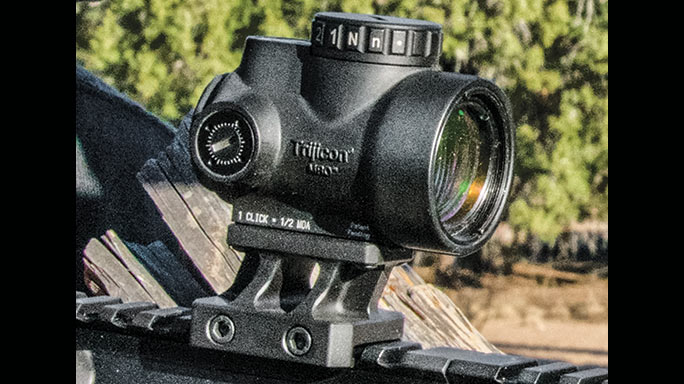 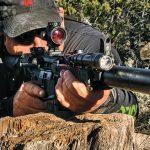 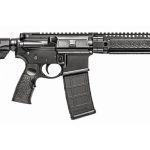 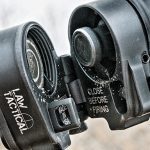 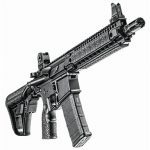 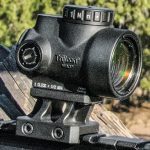 Law enforcement has widely adopted the AR platform for primary patrol rifles. Anything else is an anomaly. If an agency chooses to assign or allow rifles, it will probably be an AR chambered in 5.56mm NATO.

Other chamberings are issued on occasion, but it’s rare. There are lots of reasons why—some practical, others political, many logistical. Although the 5.56mm NATO is anything but perfect, it will get the job done in most cases. Most police engagements fall well under 100 yards, which is well within the effective operational range of the 5.56mm NATO. This fact, coupled with substantial improvements in bullet construction and ammunition design, has resulted in another norm in the law enforcement world: shorter barrels.

Many police departments want short-barreled rifles (SBRs) for entry teams, even patrol officers. SBRs are just plain handy and they’re easy to store in lockers and police cruisers. Of course, each manufacturer had a different take, but from the very beginning, most SBRs had 10- to 11-inch barrels and carbine-length gas systems. Some early versions were marginally reliable at best. Their ballistics were acceptable, but they also offered substantial muzzle blast—I’m talking debris-filled fireballs. Sure, that makes for great photo opportunities, but these SBRs could be really dangerous during an operation, especially without hearing protection. Thankfully, much of that has changed as SBRs become more and more popular.

The Key To Short Barrels

Short-barreled ARs in 5.56mm NATO have benefited from better ammunition, improved muzzle devices and increased reliability. Years of tuning and tinkering have made these rifles better than ever. But the laws of physics are difficult to overcome. They are pretty loud when unsuppressed and sometimes unreliable suppressed. If the rifles are properly suppressed and running well, you’ll still notice a ton of excess gas. Watch an entry team clear a shoothouse with suppressed SBRs and you would think they were using black powder. This can be distracting and pose a health risk. Piston-driven rifles help, but they are costly, heavier and have their own set of issues. Officers really needed a rifle designed from the beginning for a short barrel, and this is where the 300 Blackout comes in.

The 300 BLK was designed from the ground up to be run in a barrel as short as 7 inches. A pistol-length gas system can keep short-barreled, 300 BLK ARs soft shooting and reliable. There also isn’t much excess gas when using a suppressor, and these ARs tend to run better than 5.56mms in this configuration. Properly loaded, the 300 BLK mimics the ballistics of the 7.62x39mm with vastly improved accuracy.

Given realistic urban ranges, the 300 BLK is an excellent choice, and it gives users the option of running
supersonic or subsonic ammo. This unprecedented versatility is why the 300 BLK continues to gain popularity. I’ve tested several 300 BLK rifles now, and they’ve mostly worked well with 9- or 16-inch barrels. But Daniel Defense’s new 10.3-inch-barreled DDM4 300S might just be my favorite.

Daniel Defense has been producing some of the most trusted ARs for years. Take a poll of professionals and Daniel Defense will certainly be in the top-three rankings for direct impingement ARs designed for duty use. Daniel Defense builds simple, reliable rifles ready to face today’s threats. The company’s MK18 remains one of the most popular 10.5-inch-barreled 5.56mm ARs on the market today, and the new DDM4 300S looks to bring that battle-proven heritage to the 300 BLK.

The DDM4 300S starts with upper and lower receivers that are CNC-machined from 7075-T6 aluminum. The upper features a 10.3-inch, chrome-moly, cold-hammer-forged barrel with Daniel Defense’s Strength-to-Weight (S2W) profile, M4 feed ramps and a 1-in-8-inch twist rate. Coated in a salt-bath-nitride finish, the barrel has been high-pressure (HP) and magnetic-particle (MP) tested. Finally, the high-quality barrel comes with an A2-style flash suppressor installed.

The pistol-length gas system is channeled through a pinned, low-profile gas block machined from 4140 hardened steel. It drives an M16-profile, chrome-lined bolt carrier group that has been MP tested and properly staked. Surrounding the barrel and gas system is Daniel Defense’s 9-inch DDM4 Rail, a quad-rail handguard with quick-detach (QD) sling sockets at the front and rear on both sides. The handguard comes with rail panels made from Santoprene, a soft, heat-resistant material that keep your hands cool and locked in place. A handy Daniel Defense vertical foregrip is also provided.

The lower receiver features traditional AR controls, including a mil-spec trigger and single-sided safety, and an enlarged triggerguard. The six-position buffer tube supports a Daniel Defense collapsible stock, which has an ergonomic design with “Soft Touch” overmolding. The Daniel Defense pistol grip is more vertical than traditional A2-style designs for better handling and control in close quarters, and it also sports matching Soft Touch overmolding for comfort. The DDM4 300S ships in a hard case with one 30-round Magpul Gen 3 PMAG.

While Daniel Defense offers the DDM4 300S as a complete rifle, I tested an upper on a registered SBR lower with a Hiperfire trigger and a Battle Arms Development ambidextrous safety. I installed a Daniel Defense stock on a Primary Weapons Systems buffer tube fitted with a Law Tactical Gen 3-M Folding Stock Adapter.

But I wasn’t done there. For true CQB capabilities, I added a SureFire Scout light in a LaRue Tactical side mount along with SureFire’s SOCOM300 SPS sound suppressor (installed with a SureFire Warcomp flash suppressor) and SilencerCo’s Omega .30-caliber suppressor (threaded directly to the barrel). I got to test the rifle in these various configurations on my home range and at Gunsite Academy.

I tested the DDM4 300S’ accuracy under three different conditions, all using the Burris XTR II scope. Limiting subsonic ammo to 25-yard targets, the Gorilla 220-grain OTMs and Daniel Defense 220-grain Scenars produced almost identical 10-shot groups measuring just over an inch. Nothing at this range grouped outside of 1.25 inches, with most groups at or under an inch.

Moving back to 50 yards, DoubleTap’s 110-grain Tactical load using a Barnes TTSX bullet produced the best five-shot group of 0.55 inches. At 100 yards, the DoubleTap rounds clustered into a 0.75-inch group. Everything else was around an inch. With the DDM4 300S producing little to no recoil, it was just plain easy to be accurate, even at the limits of the 300 BLK cartridge. In fact, it was easy to tag steel targets at 300 yards with Gemtech’s 125-grain ammo.

Next I swapped out the Burris scope for the Trijicon MRO, which I zeroed at 50 yards using the DoubleTap 110-grain TTSX ammo, before taking the entire rig to Gunsite for some more testing. This DoubleTap load would be my preferred duty round, as the 110-grain TTSX is soft shooting, accurate and maintains solid velocity out of the 10.3-inch barrel.

A media event at Gunsite provided an opportunity to spend the day running the DDM4 300S using subsonic ammunition, with mostly square range and movement drills. Here I used the SilencerCo Omega, which was handy and 100-percent reliable. After a day on Gunsite’s North Range and The Scrambler, the DDM4 300S really grew on me. There is just something about using a 10.3-inch-barreled AR. The barrel/forend is long enough for a solid hold, yet it’s still short enough to be incredibly handy on obstacles. The Law Tactical Folding Stock Adapter made it easy to fit the rifle in my Mystery Ranch 3-Day Assault Pack for covert transportation.

An advantage of the DDM4 300S’ 10.3-inch barrel is its ability to run pretty much anything unsuppressed. Using a standard carbine buffer, I could go back and forth between most subsonic loads and any of the supersonic ammunition. With an H-buffer, it ran every 220-grain subsonic load. In fact, Daniel Defense’s 220-grain load was the most consistent in operation of all the subsonic loads. After adding the Omega suppressor, the recoil was light and there wasn’t much excess gas.

The DDM4 300s more than lives up to Daniel Defense’s reputation for reliability and accuracy. It’s an incredibly versatile package. If you are in the market for a solid SBR in a proven barrel length and a promising caliber, make sure you check out the DDM4 300S. You won’t be disappointed. 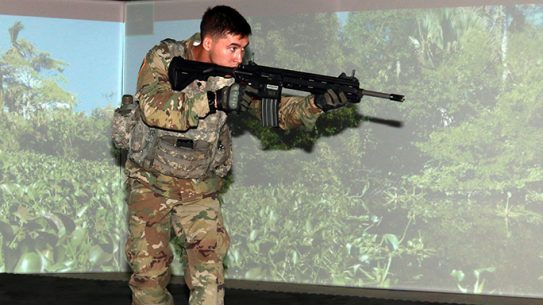 Spc. Daniel Guenther and Staff Sgt. Ethan Rodgers will bring their skills to the...