by Sean Utley
in Guns, Rifles
0

There’s an inherent problem with being a manufacturer that specializes and dominates in one category of firearms: You are only known for producing that particular type of firearm. And no matter how well you do it, it’s difficult to break that mold and be seen by the masses as anything but. 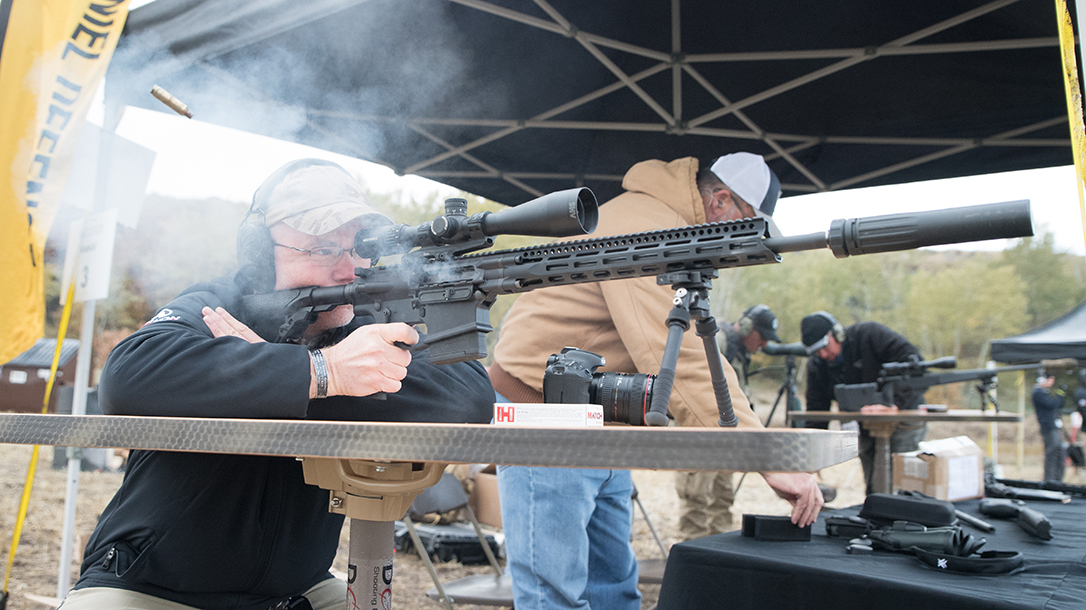 The AR-15 market is bloated, flooded, and fat. It’s a beast that is often unleashed by a threatening political climate. It awakens and grows into something uncontrollable and as rhetoric dies down, so does its energy. Daniel Defense is an AR-15 manufacturer of the ages and has ridden the ebb and flow countless times. Now DD is breaking new ground with the all-new Daniel Defense DELTA 5 bolt-action rifle.

It’s important for manufacturers to grow and specialize. But why not specialize in creating a winning formula that results in quality products as opposed to specializing in creating a particular product? When your formula is successfully executed over and over, people know that no matter what you produce, it will be right, and Daniel Defense is poised to show others how it’s done.

Bolt-action rifles is where it’s at. They’re hot like the Black Creek, Georgia summers that DD enjoys and it’s not showing any signs of slowing. If you haven’t been in the bolt-action game with a relevant product for at least the past two years, you’re well behind the curve. Daniel Defense realized this and has been designing and engineering its next dominator for the past two years — reluctant to release it until it was right. And on a late fall day on a private farm in Georgia, Daniel Defense revealed to us the DELTA 5.

The DELTA 5 is a bolt-action rifle, and a seriously considered, well-thought-out one at that. In its initial iteration it will serve as a multi-role, everyday “working man’s rifle,” able to do many things well. But the platform is expandable and future product additions will allow the DELTA 5 to become whatever the end user wants it to be for whatever occasion.

Daniel Defense says the DELTA 5 is modular, but that is an oversimplification and makes it sound a bit cheap and gimmicky in my opinion. Let’s simply say it’s “expandable,” just like the AR-15 platform Daniel Defense is so well known for.

Inside the Daniel Defense DELTA 5

Like any rifle, the core is in the DELTA 5’s receiver and the rifle utilizes a mini chassis so that the action always beds into the same place. Accuracy and predictability start with consistency, and this design helps ensure this. The mini chassis is aluminum. Daniel Defense sandwiched it between the stainless steel action and the DELTA 5 bottom metal, which features integral pillars that pass through the stock and mate up perfectly flush with the bottom of the mini chassis.

Everything is square and straight. This is an important design feature because the stock is basically held in place by the chassis system and bottom metal. Temperature changes can effect wooden and plastic stocks but the aluminum mating between the bottom metal and the mini chassis is hardly effected by temperature swings. Again, accuracy and predictability starts with consistency. The bottom metal also features a built in barrier stop and is compatible with AICS pattern magazines.

As mentioned before the action is stainless steel, with a 3-lug bolt, resulting in a short and sweet 60 degree throw. You will notice that the DELTA 5 action has a fair amount of play in it at the rear. Meant for field use, this keeps elements and debris from becoming a problem to your DELTA 5. But a floating bolt head ensures extremely tight and straight bolt lock up. Proper alignment between the bolt face, and cartridge head is achieved here, which leads to good accuracy. The short action gets a standard .473” bolt face diameter and an excellent Sako-style extractor. The bolt handle is press fit and welded for extra strength, while the bolt knob is removable and has a 5/16-24 thread pitch for other options.

The DELTA 5 action is well thought out. While the scope base is not integral, it features four strong #10-32 bolts that are slightly offset to keep the rail firmly in place without the bolts stripping. The base is notched to mate up with the integral recoil lug, further lessening the chance of any movement and the aforementioned offset keeps the rail against the lug. The base angle is 20 MOA or 5.8 mil of additional elevation, and features 14 T slots.

If you’re not yet convinced of the DELTA 5 bringing any real benefit to the bolt-action game, what I’m about to say might do it. Changing barrels on bolt actions is something that must be performed by a gunsmith, unless you have a switch-barrel type of rifle and those are typically very expensive. The DELTA 5 features a user interchangeable barrel system, much like that of an AR-15, which comes as no surprise.

The receiver is notched, and the barrel has an indicator protrusion, as well as a barrel extension. Due to tight and consistent tolerances achieved during machining, proper headspace is ensured. No smith needed. With Daniel Defense’s ability to produce hammer-forged barrels in house, just think of the possibilities. Can you say contours?

The DELTA 5’s list of goodies doesn’t stop there. Daniel Defense continued its own design in the stock as well. It’s a carbon fiber reinforced polymer construction that helps keep the overall package less than 10 pounds in the heaviest configuration. Engineers told us they spent a significant amount of time on the stock to make sure it felt right, and this development was watched closely by Marty Daniel.

The stock is comfortable and has a ribbed area for the shooter’s thumb to rest in line and comfortably. I found no issue with the stock and found it to fit me well with minimal adjustment. It will serve many shooters well. As you might expect, it’s configurable as well with length of pull and butt pad height adjustments; the latter being one I find especially nice. Cheek pad adjustability has an inch of travel up and is adjustable for yaw and drift.

There is a butt hook on the bottom rear of the stock. Some people like them and some don’t. Up front there are 11 M-LOK attachment points for bipods, slings, and the what not. There are also QD sling points at the front and rear of the stock.

While Daniel Defense makes a lot of things, they deferred the trigger to someone else, opting to go with a Timney Elite Hunter. Pull weight on the Timney is adjustable from 1.5 to 4 pound, exactly as expected. Break is clean and crisp, exactly what I’ve come to expect from Timney.

The DELTA 5 will bring a world of variety and modularity to bolt-action rifles that hasn’t been seen before. Initial offerings will be short action rifles chambered in .308, 6.5 Creedmoor, and 7mm-08 Remington. Respective barrel lengths will be 20 inches for .308, and 24 inches for the other two.

Barrels will be threaded in 5/8×24 pitch for fitment of muzzle devices or suppressors, either of which you can get from Daniel Defense. The manufacturer outfitted the test rifles with DD Wave suppressors. Rifles also ship with PMAG five-round AICS magazines.

We were able to shoot the initial pre-production rifles in various scenarios, including general range shooting. We shot groups from 100 yards all the way out to 1,000 yards on different ranges. Our rifles were chambered in 6.5 Creedmoor. They fed with excellent 140 gr. ELD Match ammo from Hornady. Daniel Defense topped them with high-quality Nightforce Optics, 5-25×56 ATACRs.

It’s hard for me to give my complete shooting impressions of the DELTA 5. Being pre-production rifles, some things weren’t complete or were in the process of being changed, as one might expect. That said, I couldn’t fully gauge the complete shooing experience. I can say that the rifles were accurate, with couple of attendees shooting sub half-MOA groups during our time on the 100 yard range.

All shooters easily made hits on the 1,000 yard target multiple times and everything in between, nearly to the point of boredom. The rifles held up well, which truly impressed me, especially with several people running them hard with hot with suppressors attached. The rifles stayed accurate and continued to run.

Going into this event Daniel Defense didn’t have an MSRP set. All of us gladly chimed in with our thoughts on the matter. But it was hard to say with all the innovation and modularity it brings. That said, Daniel Defense has announced an MSRP of $2,199, for a complete rifle, with one barrel and one magazine. For an accurate bolt-action platform with interchangeable barrels and other solid features, that’s pretty good.

I can think of no reason that this rifle won’t be an instant hit with buyers. As the platform upgrades and expands, it could see a cult-like following. I’m eagerly awaiting the full-production model for a complete shakedown. The Daniel Defense DELTA 5 definitely has the goods, and the promise of a bright, expansive and modular future. For even more info, please visit DanielDefense.com.