In Latin, Aptus means such things as fit, suitable, proper and ready, the latter describing it best. It is an AR platform like no other—really. The latest development from DRD Tactical, the Aptus, is, in a nutshell, the long awaited little brother of the company’s (AR-10 size) .308 caliber Paratus, which in Latin means prepared, as in the U.S. Coast Guard’s motto, Semper Paratus, or Always Prepared. Both rifles share the same features, which make them unique. 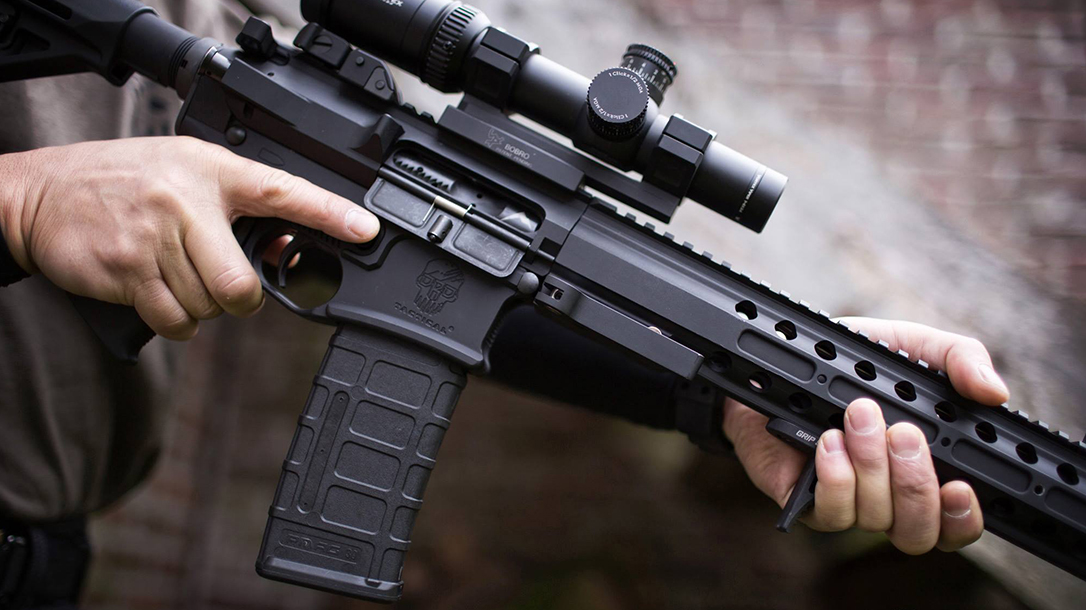 Getting right to the point, the Aptus presents three main features. Those include its left side cocking handle, its folding stock and its quick-change barrel. Other than the Paratus, no other AR-type rifle has all three of these features. Let’s get closer.

Much like the renowned FN-FAL, the Aptus’ cocking handle is housed in the upper receiver and not on the bolt. It is thus not only non-reciprocating, but like the BAR it also covers the slot in which it runs when not in use. As with some versions of the FAL, this cocking handle can be folded, but protrudes slightly for fast and sure purchase when it’s needed.

Invented and patented by Magpul and licensed to Bushmaster, the Aptus’ Adaptive Combat Rifle (ACR) folding stock is one of the finest folding stocks in the world. No, it won’t work with contemporary AR platforms, but only similar rifles where the recoil spring system is totally housed within the upper receiver. The ACR stock easily unlocks and folds to the right. It adjusts for length of pull and features a built-in cheek piece that deploys upwards for a proper cheek-weld when using optics. The stock and pistol grip come in black and flat dark earth.

The Aptus’ third feature comes in a quick-change barrel. It assembles in about 35 seconds, but many will likely choose to keep the Aptus fully assembled, and “ready!”

While hand tightening the long barrel nut and locking it by the handguard’s cam lever will also allow the barrel to be removed by hand, most will want to use the barrel nut wrench (supplied). Either method will produce 1-MOA accuracy or better.

While the Aptus uses a single recoil spring, this part is housed completely inside the upper receiver much like the dual recoil springs of the 1970’s ArmaLite AR-180 Rifle. The Aptus’ bolt is shorter than that of a standard AR-15, but can be removed from the bolt carrier in the same way. The head of the bolt cam pin, rounded at the corners, eliminates contact with the upper receiver as the bolt opens.

Atop the bolt carrier resides a large steel block. The recoil spring guide rides here, while the compressed recoil spring stores inside when the bolt group is in full recoil. The block contains the gas key and also adds weight to the shorter bolt group.

Above the large winter triggerguard on both sides of the receiver is a grooved surface for placement of the index finger when the Aptus is not on target. It offers protection from accidentally bumping off the bolt release. A Magpul MOE grip is standard and will hold a number of small accessories or batteries.

The excellent ACR stock comes with a “D”-shaped sling mount on the left side. The charging handle rail passes through it. Locking the handle back prevents the stock from folding or closing. With the stock extended to only the first position, the cheekpiece can be pushed back enough to pivot up, and pushed back forward to lock it there for use with an optical sight. On the right rear resides a QD sling mount that can be switched to the left side and the rubber butt is well contoured.

Now pull back the charging handle enough to unlock the bolt. The bolt group now removes out the back of the rifle. The bolt then removes from the carrier by pushing out the firing pin retainer and firing pin, rotating and removing the bolt cam pin and pulling the bolt out the front of the carrier just like an AR-15.

If the barrel is assembled in the rifle, pull out the front end of the lever on the right side of the handguard to 90 degrees. Then push the retaining pin in front of the lever out to the rifle using a small dowel or the point of a bullet. With this pin out as far as it will go, pull the handguard forward and off of the rifle.

By hand or with the barrel wrench, unscrew the barrel nut and pull the barrel out of the front of the receiver. If the bolt is installed and forward, pull it back slightly in order to unlock from the barrel, and pull out the barrel from the upper receiver. No further disassembly is necessary and reassembly is in reverse.

During the assembly of the handguard, a male extension at the rear of the top rail fits perfectly with a female cutout in the front of the receiver. Along with the bottom cam this assures a perfect in-line of the entire top rail, guaranteeing a rigid foundation for any optical equipment. On the entire sides and bottom of the handguard are M-Lok slots allowing Magpul rail sections to be placed as needed. Slots not in use can be filled with Magpul slim rail covers or those from ERGO Grips.

The Aptus comes in black, flat dark earth or battle worn finish. The mottled gray battle worn finish came on my sample Aptus. Raising this temperature a few more degrees was when I learned that this finish is actually nickel boron. It proves not only tougher than Type II hardcoat but also has a natural lubricity.

Accessories for the Aptus are infinite and, being quite wise on DRD Tactical’s part, the rifle comes without any. No matter what accessories a gun company furnishes with any firearms, they will probably end up in that “box” we all have, finally to be given to someone just to make room. Accessories are like underwear—very personal, but necessary.

For the Aptus’ gray, battle worn finish I chose a gray Vickers Battle Application sling from Blue Force Gear with universal attaching points. For the front point I chose Blue Force Gear’s ULoop, a fast attach universal sling mount that can go almost anywhere on any handguard. I selected a QD swivel for the butt end. The sling extends for opposite shoulder use. It also hangs perfectly down to one side with the muzzle away from one’s feet.

For BUIS, I prefer either Magpul or Swan folding sights, either steel or polymer, the latter adding no weight. With the myriad of red-dot optics out there the choices are virtually endless, but one can’t go wrong with the big name companies such as Aimpoint, Burris, DIOptical, Leupold, Trijicon, Vortex or others that specialize in only optics, and the same goes for telescopic sights and lasers.

Lights are indispensable and here again, “light is right,” and I mean lightweight, as ounces, not pounds. Marketed by LaserMax and called the LMR Manta-Ray, this 1.8-ounce waterproof light snaps onto a mil-spec side rail to provide 1 hour of rechargeable 20- to 140-lumens of green light. It also comes in an IR version. The super light LaserMax Micro Laser also works well with the Manta-Ray when mounted on the top rail just in front of the BUIS front sight.

For accuracy testing we used a Leupold Mark 4 3-9x36mm MR/T Scope (MK-12 SPR) in an A.R.M.S. #72 EXT mount. Using 300 Blackout and .223 barrels there were no malfunctions, except for one brand and bullet weight of .300 Blackout failing to lock open the bolt on the last round. Magazines used were two Magpul Gen III magazines. See the accuracy results listed in the performance chart.

Having become spoiled by good triggers, the only change I might make in the Aptus would be a better one. A model rom one of the top companies would mark a good addition.

Whatever your AR needs are, DRD Tactical is ready. The Aptus also comes as an SBR and a pistol. It also comes as a high-grade precision semi-automatic rifles in 7.62x51mm, .300 Norma Magnum and .338 Lapua. For more information, visit drdtactical.com.

This article is from the April-May 2021 issue of Tactical Life magazine. Grab your copy at OutdoorGroupStore.com.