Hands On The DRD Tactical Kivaari in .300 Norma Magnum

For anyone not familiar, DRD Tactical‘s .338 Lapua Magnum Kivaari—which means “rifle” in Finnish—was designed around the company’s AR-based takedown system, but it encompasses significantly more research and development than the company’s CDR-15 and Paratus models for which DRD Tactical has become famous. The Kivaari uses the same patented takedown method as its 5.56mm and 7.62mm NATO counterparts, allowing this larger .338 Lapua Magnum rifle to be assembled without tools in about 30 seconds.

Assembly is simple. After making sure the rifle is unloaded with the magazine removed, lock the bolt to the rear, engage the AR-type safety and insert the barrel and gas tube into the front of the receiver. Yes, the Kivaari operates via direct impingement. The barrel comes with a cap held on by the barrel nut that protects the gas tube, and it’s the first component unscrewed and removed to properly install the match-grade barrel.

With the barrel firmly in place, the barrel nut is screwed in tightly by hand (a wrench is also furnished). The special free-floating, 7075-T6 aluminum handguard is then slipped over the muzzle after rotating the locking cam lever out to expose the retaining pin, then pulling the pin out as far as it will go. With the handguard in place against the receiver, the retaining pin is pushed in from the right and the cam lever is rotated forward. This squeezes the slotted rear of the handguard tightly together against the barrel nut, preventing it from rotating. The Kivaari is then ready to be loaded and fired in the normal manner.

The Kivaari’s match-grade, 24-inch barrel has a 1-in-10-inch twist rate and a threaded muzzle, and DRD Tactical includes a muzzle brake to help mitigate felt recoil. The handguard has a full-length top rail that mates with the flattop receiver’s. The sides and bottom of the handguard feature M-LOK accessory mounting slots, and a short rail is included in the 6 o’clock position for a bipod.

As with DRD Tactical’s Paratus rifle, the Kivaari comes with a folding, non- reciprocating charging handle on the left side of the receiver. This makes charging the rifle easier and also attenuates gas bleeding from the rear of the receiver when a suppressor is used. Providing protection to the inner portion of the upper receiver where the bolt’s cam pin makes contact during unlocking, a hardened steel plate is semi-permanently implanted. The upper receiver has no dust cover or forward assist. 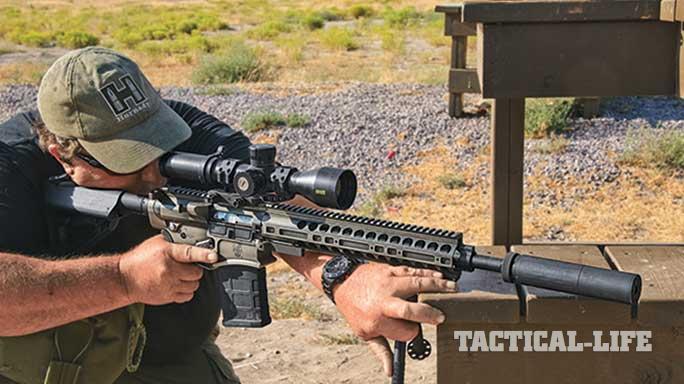 Finished in nickel-boron, the Kivaari’s bolt group consists of essentially the same components as an AR, but much larger. With seven massive lugs, the bolt has a wide extractor with a spring-loaded ejector in the bolt face. The firing pin uses a return spring with a solid retaining cross pin, but the cam pin differs. As with the last Stoner AR-10A sold to Colt in 1959, the Kivaari’s cam pin has a roller bearing that contributes to the rifle’s smooth operation. There is also a replaceable hard steel shoulder inside the upper receiver where the cam pin first makes contact when the bolt unlocks.

A special feature of the bolt carrier group is the special Adjustable Drop-In Gas System (ADIGS), a unique gas key that allows you to adjust the amount of gas entering the carrier’s gas cylinder. This is an ideal solution for fine-tuning any AR gas system, especially when a sound suppressor is used.

On both sides of the lower receiver you’ll find a grooved portion where you can rest your trigger finger when it’s not inside the triggerguard. An Ergo grip is standard along with a fully adjustable Magpul PRS buttstock. No sights are furnished. The Kivaari comes with a single-stage, 4.5-pound Wilson Combat Tactical Trigger Unit (TTU), an ambidextrous magazine release and an ambidextrous Phase 5 bolt-hold-open/release.

DRD Tactical also ships the Kivaari rifle in a specially fitted, closed-cell-foam-lined SKB case with two 10-round magazines, a bipod, the barrel nut wrench and spaces for a scope and sound suppressor along with the disassembled rifle. The Kivaari is available in black or Flat Dark Earth Cerakote as well as a nickel-boron Battle Worn finish.

Having shot the semi-automatic Kivaari in .338 Lapua Magnum, I am no stranger to the platform, but I got a big surprise at the 2017 SHOT Show when DRD Tactical’s Skip Patel told me that he had been testing the Kivaari in .300 Norma Magnum. A few weeks later, I received the first one for testing. So what’s the big deal?

By now, most serious long-range shooters know that U.S. Special Operations Command (USSOCOM) has adopted the .300 Norma Magnum over the venerable .338 Lapua Magnum for use in its Advanced Sniper Rifles (ASRs). To clarify, the ASR is the redesignation of the previous Precision Sniper Rifle (PSR) platform.

With all of these cartridges, the rim diameter is 0.588 inches, and they require large magnum rifle primers. With an overall length of 3.68 inches, the .300 Norma Magnum is just a little longer than the .30-06, but with a much larger powder capacity. 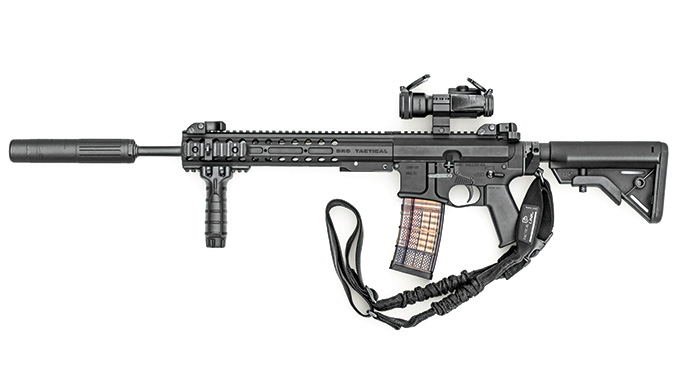 USSOCOM is rumored to be testing a special proprietary .30-caliber bullet from Hornady weighing 203 grains that stays supersonic beyond 1,500 yards, but Hornady does not currently list such a bullet on its website. We’ll have to wait and see, but I suspect that one of the secrets is in the bullet’s ogive, as well as a very low-drag (VLD) base.

No additional information was available on this bullet, but Applied Ballistics Munitions (ABM) of Fullerton, California, is loading a “Mission Ready” .300 Norma Magnum with a 215-grain Berger Match Hybrid open-tip match (OTM) bullet. This bullet should have a muzzle velocity of at least 3,000 fps with a ballistic coefficient of 0.691, and it not only remains supersonic to 1,500 yards, but it’s still transonically stable with a predictable trajectory out to 1 mile or more with first-round hits that have already been recorded by long-range competitors.

So, how does this relate to the DRD Tactical Kivaari? USSOCOM has issued a solicitation for a bolt-action ASR in .300 Norma Magnum. Why? Maybe because such a semi-automatic rifle didn’t exist. But that’s not the case anymore.

Although I wanted to use my SureFire suppressor on the test rifle, the barrel was about 0.001 inches too wide, so instead I mounted a muzzle brake from Smith Enterprise in addition to M-LOK handguard panels dressed in Flat Dark Earth.

I was only able to acquire 40 rounds of ABM’s 215-grain .300 Norma Magnum ammunition in time for this brief test, which limited my report, but this ammunition is top of the line, and it comes from one of the best makers out there. To what extent (if any) these companies and Berger Bullets were involved with USSOCOM’s adoption of the .300 Norma Magnum remains unknown.

I made the best use possible of those 40 rounds to adjust the gas flow and sight in a U.S. Optics 1.8-10x37mm MR10 scope installed in an ARMS mount. The felt recoil seemed about 30-percent lighter than the .338 Lapua Magnum Kivaari’s, and the rifle performed flawlessly. The included performance table tells the rest of the story, but this is an exceptional powerhouse built for extreme long-distance shooting. USSOCOM would do well to check it out.