"My gun was a lime green AR in 5.56mm NATO nicknamed “The Grunt,” which came with several features I’d never used before this event."

Custom firearms have always been very popular. Many of the most useful features found on production firearms today came from small shops before they were picked up by larger, more mainstream manufacturers. Were it not for custom gunsmiths’ willingness to think outside of the box, we would probably still be using flintlocks.

Custom shops drive innovation, and they can cater to what many consider “atypical” buyers who don’t exactly want cookie-cutter rifles designed solely for personal or home defense. Because the firearms market is currently saturated with AR-platform rifles, a new niche has sprung up—shooters who want something different. And one new company, EraThr3, was created specifically for those not satisfied with the status quo.

EraThr3 is not some large corporate manufacturer building firearms in the thousands. Sheri Johnson and Sterling Becklin started EraThr3 in 2013, and it remains a small operation. But don’t let the company’s young age fool you. Sheri previously served as the general manager of Noveske Rifleworks and had been working there since 2004. Looking to get back to the excitement of her previous company’s “garage days,” she teamed up with Sterling, a former Noveske president, to reach a new market—one less interested in a tactical edge yet still in need of high-quality products. I recently attended a media event for gun writers in Utah with Sheri, Sterling and EraThr3’s editorial director, Ken Hutchison, which gave me a great opportunity to get to know the company and its products a little better.

When I drove up to the range, I immediately noticed rifles Cerakoted bright orange, green, yellow, blue, pink and purple. The guns had arrived in custom-made wooden crates engraved with our names and filled with various goodies and assorted clothing. My gun was a lime green AR in 5.56mm NATO nicknamed “The Grunt,” which came with several features I’d never used before this event. The goal was to make something different, and EraThr3 certainly accomplished that task very well.

Meeting Sheri and Sterling marked the beginning of some of the most fun I’ve had on a range in a long time. Both are engaging, friendly, enthusiastic and great to be around. They don’t take themselves too seriously, which made for a fun visit. When I asked Sheri about the bright colors on the rifles, she simply said that they were fun and different. And that may sum up the whole event.

The EraThr3 Grunt rifle started with EraThr3’s E3 upper and lower receivers, which are machined from a billet of 7075-T6 aluminum and fitted by hand for enhanced accuracy. The receivers also feature several cutouts to reduce weight, and a smooth Cerakote finish gives the rifle its bright lime green color.

The upper houses a 16-inch, carbon-fiber-wrapped barrel from Proof Research. The barrel has a .223 Wylde chamber, a 1-in-7-inch twist rate and a SilencerCo Saker flash suppressor. Surrounding the barrel and mid-length gas system is a 15-inch handguard with several lightening cuts, M-LOK slots for mounting accessories along the sides and bottom, and a full-length Picatinny rail on top for sights and optics. The upper also sports an AXTS Raptor ambidextrous charging handle and a titanium bolt carrier that holds an enhanced bolt from JP Enterprises. Another small touch is the dust cover, which is held in place with a recessed rod.

The E3 lower receiver is a truly unique design that is secured to the upper with enlarged titanium takedown pins. The first thing you’ll probably notice is the magazine well, which has cutouts on both sides as well as the front to help reduce weight. The integral triggerguard houses an AR Gold trigger from American Trigger. The magazine release and AXTS Talon ambidextrous safety are also made of titanium.

The rear of the lower receiver features a Primary Weapons Systems enhanced buffer tube with an H2 buffer. A Flat Dark Earth Magpul STR stock is installed on the buffer tube, and the pistol grip is a matching Magpul MIAD unit.

For targeting, the test rifle came equipped with a Leupold 3-18x44mm Mark 6 scope mounted in a Leupold IMS mount as well as Dueck Defense’s offset RTS sights. The EraThr3 Grunt also came with three 20-round Magpul Gen 3 PMAGs and an Atlas bipod. 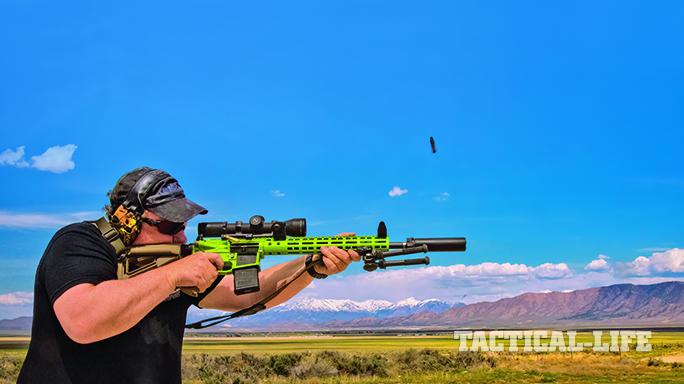 The first day of the media event, we took shots out to 1,100 meters but mostly focused on targets at 600 meters and in. Hornady provided its 75-grain Superformance Match BTHP ammunition, which proved very accurate in the Grunt. This 5.56mm NATO ammo has a higher velocity than most of Hornady’s .223 Remington ammo. Factory rated at 2,910 fps from a 20-inch barrel, this load came closer to 2,800 fps through the Grunt’s 16-inch barrel.

I was able to get hits on steel targets at 600 meters with just one or two shots. Winds ranging from 10 to 20 mph made it harder to get hits at 800 and 1,000 meters, but I hit both of those targets. It was almost too easy; as long as I correctly accounted for the wind, I’d get a hit. Timed for right-handed shooters, the Saker flash suppressor held the muzzle in place with no rise. The EraThr3 Grunt was soft to shoot. It mostly stayed in place, even during rapid-fire strings.

Next, we ran a short course of fire where each writer had to take shooting positions behind barricades and hay bales to engage ISPC-sized steel targets and LaRue knockdown targets from 50 to 500 meters. My first run, I didn’t miss a single target. I knocked them all down in turn, even the steel set at 508 meters. One thing became very obvious during this portion of the testing: The Grunt is truly light, and I had no problem running with it. It’s easy to maneuver with, carries well and recoils slightly, which makes it easier to get back on target for quick follow-up shots.

Each rifle was zeroed to hit close to the middle of a 6-inch steel target. My test rifle held dead on to my Kestrel readings and provided for consistent hits at extended ranges. It did so with the Hornady ammo as well as Black Hills’ 69-grain TMKs and Barnes’ 70-grain TSXs with no perceivable shift in holds. And it did all of this without cleaning the bore, only wiping down the bolt carrier group once in a while and occasionally adding oil.

After the event, I took the EraThr3 Grunt back to my home range, where I tested it for 100-yard groups and ran some of my own range drills. The results were similar—the rifle was very accurate, producing groups with all three types of ammunition within 0.6 inches. Hornady’s 75-grain Superformance Match ammo created the smallest group, which measured 0.5 inches exactly.

Between the media event and the trip to my home range, the EraThr3 Grunt never suffered a single malfunction, even when it was caked in sand and dust. Without extensive cleaning, the gun continued to run. Using ammo from Barnes, Black Hills and Hornady as well as a couple different 55-grain loads, the Grunt functioned without issue. I also ran the rifle with a SureFire SOCOM556-RC2 suppressor at my home range and didn’t experience a single hiccup. The ejection pattern shifted, as is typical with suppressor use, but the rifle never failed to eject a round.

I also want to note that, at 4.7 pounds unloaded, this is the lightest AR I’ve ever tested. The older I get, the less a rifle weighs, the better, and it’d be hard to beat the Grunt in this regard. Once the shooting started, I never noticed an increase in recoil or second-shot accuracy. My back and shoulders were very pleased with the lack of weight in my arms.

Each of these media event rifles was later listed on EraThr3’s website as a package with all of the test equipment included for a deeply discounted price. And despite their $6,750 price tags, the rifle packages quickly sold out, with $1,000 from each sale going to veterans’ charities. These were custom rifles built by hand with custom touches that are both useful and cosmetic, hence their custom prices.But EraThr3 treats every rifle like a personal creation—not a slab of aluminum and other parts slapped together. The attention to detail on my EraThr3 Grunt rifle alone was absolutely impressive. So if you’re looking for a cheap, get-it-done kind of rifle, you’ll need to look elsewhere. But if you are in the market for an unusual-looking rifle that performs well while standing out from the crowd, make sure you check out EraThr3.

This article was published in ‘Black Guns’ #190. For information on how to subscribe, please email subscriptions@outdoorgroupmags.com or call 1-800-284-5668.