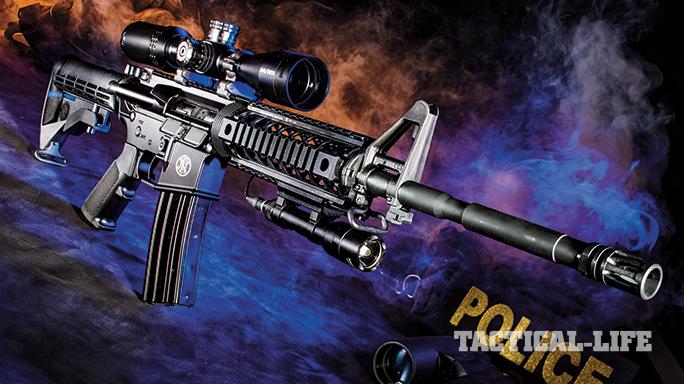 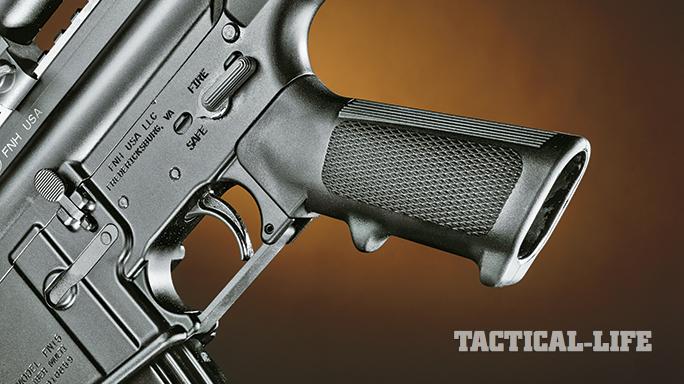 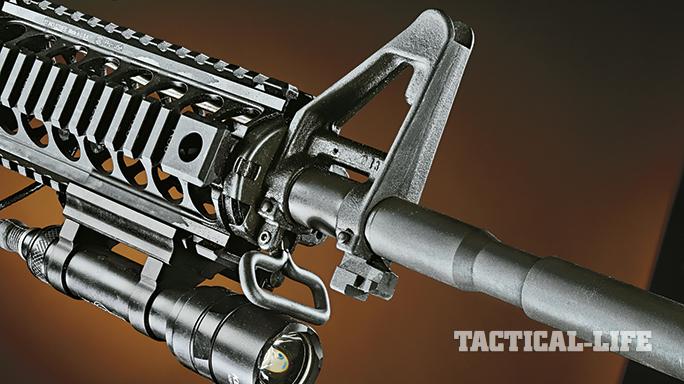 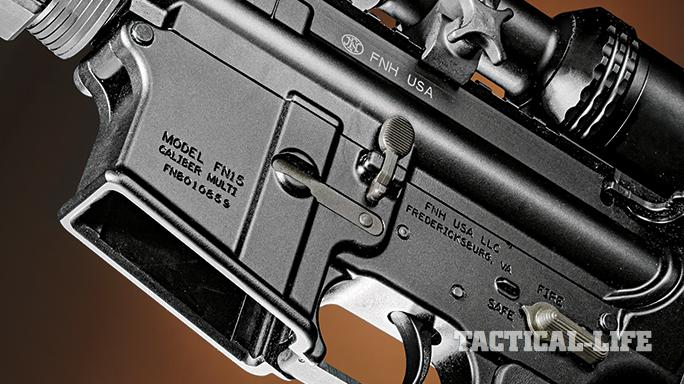 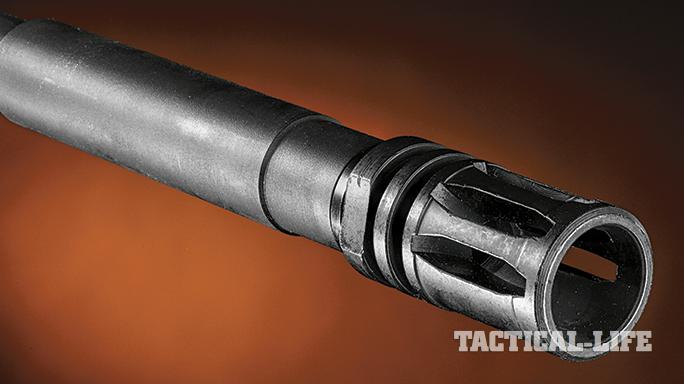 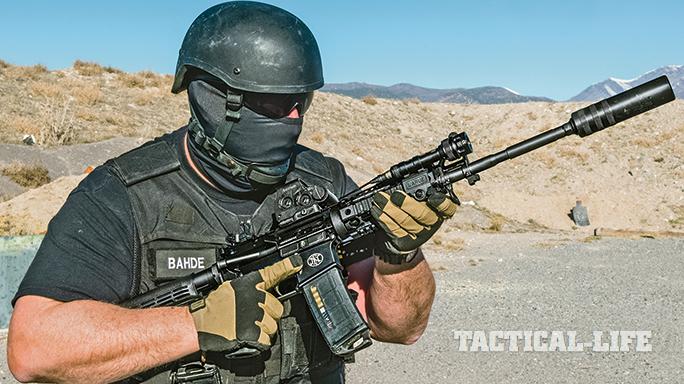 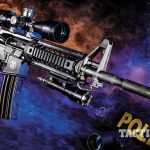 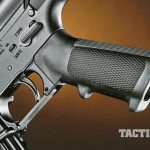 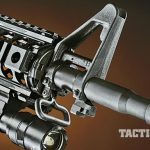 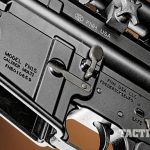 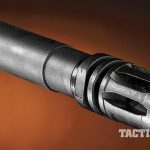 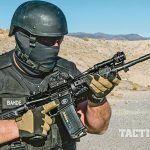 The U.S. counterpart of FN Herstal, FN America, has earned its reputation as one of the finest builders of battle-tested and proven rifles for our military. The FN SCAR series remains a favorite among many military and police operators. FN America also has secured the latest contract for providing complete M16 rifles to the U.S. Army, and supplying the latest M4A1 brought the company to the forefront when it comes to mil-spec rifles.

It was only a matter of time before FN America began offering these rifles in semi-auto form to the civilian market, including law enforcement agencies. Last year, FN introduced the 5.56mm FN 15 in both Carbine and Rifle versions with 16- and 20-inch barrels, respectively. Since then, FN has released several new models, including Tactical, Sporting and DMR variants. The company’s latest is the Patrol Carbine, which is designed specifically to meet the needs of police departments and individual officers.

The FN 15 Patrol Carbine is made using high-quality forgings built to the same standards required by the U.S. military. At the heart of the carbine is its 16-inch, M4-profile, button-broached, chrome-lined, 1-in-7-inch-twist barrel. Ready to withstand the rigors of fully automatic fire, the chromed chamber and bore are made for accuracy, reliability and ease of cleaning. The upper also features M4 feed ramps to assist with feeding in the harshest conditions. The barrel is capped with an A2-style flash suppressor. Similar to an M4A1, the FN 15 Patrol Carbine ships with an A2-style front sight and a Samson flip-up rear sight that should work well with most reflex sights.

In essence, the FN 15 Patrol Carbine is designed as a simple police rifle that is simple and reliable yet provides the minimum number of accessories for proper street use. Surrounding the barrel and gas system is a 7-inch, quad-rail handguard made by Midwest Industries that makes it easy to add lights or other accessories.

The lower receiver features a pistol grip and a collapsible buttstock that can be adjusted to six different length-of-pull positions to accommodate officers of various heights or those wearing body armor. The controls are all standard AR.

Red-dot and reflex sights are quickly becoming common on patrol rifles. For most of the testing, I used an EOTech EXPS2-2 or Trijicon SRS. EOTech’s holographic weapon sights are a favorite among LEOs for duty rifles, especially ARs. The EXPS2-2 includes a built-in mount for easy instal-

lation. Patrol rifles see use from CQB distances out to as much as 100 yards, making the holographic reticle incredibly versatile. It works in any condition and allows for numerous aiming points, even at extended ranges. The EXPS2-2 is fast and well suited to threat-focused fire.

Trijicon’s SRS is a state-of-the-art reflex sight built to withstand the harshest possible use. Its 1.75-MOA red dot is powered by a solar cell that is assisted by an AA battery. Waterproof to 165 feet, the SRS is practically impervious to most duty conditions. Its unique structure uses a larger aperture to provide one of the least obstructed views of any similar sight.

Tactical lights should be mandatory on patrol rifles, as identifying your threat is imperative in low- and failing-light conditions. SureFire makes some of the most well-built and proven weapons light on the market. The company’s Scout series encompasses a number of sizes ranging in power from 120 to 300 lumens. Slim yet powerful, they are also easy to install. For testing, I added a SureFire M600 Ultra with a KM2 (both white and infrared) head for use with night vision. Its operation is controlled using an SR dual switch. I mounted it in a LaRue Offset Scout mount so it sat close to the handguard, at 1 o’clock.

Finally, I added a sound suppressor to the threaded barrel: EliteIron’s .30-caliber BattleDog. New this year, the BattleDog is relatively short yet provides excellent sound, flash and muzzle blast suppression. EliteIron’s Bravo 1 muzzle attachment device and cover are also effective. On its own, the Bravo 1 muzzle device works like a typical brake. If you add the cover, it sends flash and blast forward and away from your partner. With the BattleDog suppressor attached, the setup is very quiet with no adverse affects on operation. Possibly one of the most solidly built suppressors I’ve tested recently, the BattleDog has clean lines, stainless steel construction and weighs in at 16 ounces. It’s also full-auto rated, and I’ve used it to great effect on my select-fire M16 weapons.

The barrel is one of the most important aspects of the M4A1. Designed to offer more accuracy and a longer service life, I was curious to see how accurate the FN 15 Patrol Carbine’s barrel was. My early M4-style carbines that were truly “mil-spec” were anything but tack drivers. Holding anything under 3 inches or so at 100 yards was considered stellar. They worked, but they weren’t exactly precise. Granted, scopes on carbines were rare to nonexistent back then, but given FN’s reputation for making high-quality barrels, I expected the FN 15 Patrol Carbine to be very accurate, and it delivered.

Fired from prone using a bag and the U.S. Optics scope, my best groups, measuring just under an inch at 100 yards, were produced with Black Hills’ new 77-grain load featuring the new Sierra Tipped MatchKing (TMK) bullet. I’ve tested this load in another rifle and it was equally as impressive. Sierra has done a great job with this bullet, improving upon an already excellent design. Silver State Armory’s 77-grain OTM ammo was also very accurate. Everything else produced groups in the 1- to 1.5-inch range, which is more than acceptable for a police carbine.

Moving out to 300 yards, the 77-grain Black Hills TMK load remained impressive. I also used this range time as a chance to prepare for an upcoming training course that would involve quite a bit of running to get our heart rates up along with shooting out to extended ranges. Running or sprinting from 50 to 150 yards and engaging steel 300 yards away, there was a noticeable difference in the wind hold. A storm was coming in and winds were gusting to 20-plus mph—anything but ideal for such a small bullet. Using three different heavy bullets, the Black Hills ammo produced the most hits and the FN 15 Patrol Carbine performed incredibly well.

This rifle was 100-percent reliable throughout the test. The Bravo 1 muzzle brake worked well—it was just loud and the muzzle blast, as usual, was harsh. It’s not something for purposeful use in a duty application, but it works well in a pinch. Adding the cover cap made no difference in feel, but the blast was all sent forward, making things much more acceptable for duty or entry use. Adding the BattleDog visibly altered brass ejection from a very consistent 4 o’clock to an equally consistent 2 o’clock position. Even though the bolt speed was clearly altered, reliability was never compromised, even during very fast strings of fire.

Donning my tactical gear, it was time to put the FN 15 Patrol Carbine through its paces on the square range and in a shoothouse. Mounting the Trijicon SRS, I used the FN 15 to work around corners, through rooms and down hallways. It worked fine, even with the suppressor added. It was certainly easier to maneuver with the brake and cover cap, and the sound was commensurate with similar rifles. Again, it was definitely loud, but not any louder than using a rifle with an A2-style flash suppressor installed. I also like running with the SRS in the shoothouse. After a few runs, everything but the red dot seems to disappear—I don’t feel like I am shooting through a tube. Even with the suppressor, the FN 15 was really fast on target and ran without a hitch. It reminded me of days I spent running an M4, only the FN 15 is a ton more accurate.

Moving back to the range, I wore some active-shooter response gear and installed the EOTech EXPS2-2. The carbine worked well around barricades and various terrain features. Its accuracy was excellent, and it remained pretty easy to maneuver in and around my truck and other obstacles. With a 3x magnifier attached, it was downright precise. If I owned this rifle and could dedicate it to patrol use, the EOTech EXPS2-2 and magnifier would stay attached. They kept things pretty light, well balanced and allowed for accuracy at range and some very fast operation at closer distances.

Within the police community there is a need for solid, simple and affordable carbines with only the necessary upgrades to get the job done. Many armorers want weapons with chrome-lined bores and other features as close to the original military specifications as possible. Many major manufacturers abandoned these requirements years ago, either to keep costs down or to meet demand, but FN America has done a nice job with the FN 15 Patrol Carbine, adhering to very high quality standards. 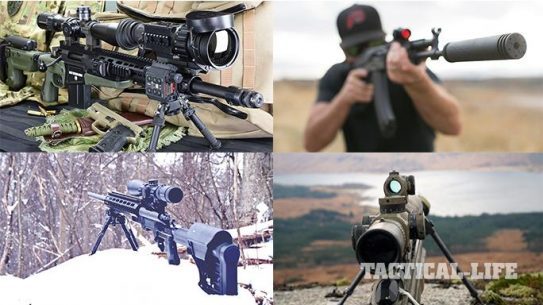 Made to withstand the rigors of day-to-day duty with law enforcement, these accessories give...