The IWI Tavor X95 Is a Soft-Shooting, No BS Bullpup

by Abner Miranda
in Guns, Rifles
0

"As far as I’m concerned, the X95 is a bullpup done right. If you’re serious about bridging the gap between CQB and intermediate ranges, the Tavor X95 is for you."

I’ve been waiting many years to write this article, and the subject matter didn’t let me down. Several years ago, I got my hands on an IWI Tavor SAR. It was decent, but it left me wanting more. Overall, it’s a quality rifle, but I knew that IWI had an even better rifle in the works. I’d already seen it being used in Israel; the only question was how long it would be before it was imported into the U.S. 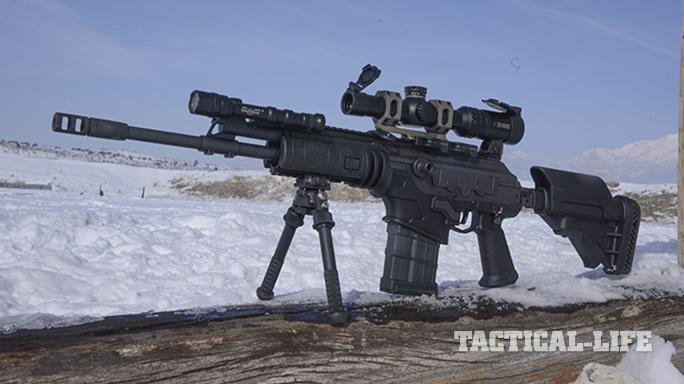 The weapon in question is the Tavor X95. For several years, I’ve been going to the Shooting, Hunting, Outdoor Trade (SHOT) Show in Las Vegas, where dozens of gun manufacturers display their new wares, and asking IWI US, “Do you have the X95 yet?” Every year, the answer’s been, “Not yet, but it’s coming.”

Well, the X95 has finally arrived, and it’s worth the wait. And while the IWI Tavor X95 that we have now in the U.S. isn’t a true X95, it’s close enough to its predecessor to be worthy of attention.

Out Of The Box

Right out of the box, I was intrigued with the fact that even though the X95 is roughly the same size and weight of the Tavor SAR, it felt smaller, lighter and better balanced than the original SAR.

And let me lay something to rest right here and now: The Tavor triggers are the single largest bone of contention for end-users. The good news is, the X95 trigger is way better than the SAR’s. This is a great trigger, and those who tell you otherwise are just selling something. But more on that in a minute.

Life As A Lefty

The rifle I requested for testing was a right-handed version. Even though I’m a lefty, I wanted a right-handed version because the vast majority of people who I train with are right-handed, and I wanted to get a large cross-section of users on the weapon. It’s one thing for me to give you my opinion, but it’s even better if I can give you the views of multiple users.

I may be a lefty, but I’m forced to be right-handed a lot in daily life. We live in an “ergonomic” world. To a lefty, ergonomic means “made for righties.” The IWI Tavor X95 reviews that I’ve consumed all have a right-handed view to them and completely miss the fact that while the X95 comes out of the box with an ambidextrous safety, bolt release and magazine release, that’s about as “ambi” as it gets without a dedicated conversion kit.

This isn’t a slight against the rifle—just something to understand about it, especially since a lot of people are all gaga about how “ambi” this rifle is. But a comparably priced AR-15 can be more ambidextrous than an X95. Top-end AR-15s come with ambidextrous safeties, bolt releases and magazine catches, and all AR-15s have centrally located charging handles as well as ejection ports that pose no issues to righties or lefties.

The IWI Tavor X95, however, has a charging handle that’s only accessible on one side of the weapon. It is reversible, but like I said, you need a conversion kit to run the gun as a lefty. Also, because this is a bullpup design, the ejection port is farther back. What does this mean? If you’re a lefty, you can’t comfortably shoot a right-handed X95, and vice versa. No matter how I tried, it wasn’t possible to shoot the X95 without getting hot brass across my mouth.

But, like I said, IWI US offers conversion kits, and you can always buy a left-hand-configured X95 to begin with from the company. My goal is just to give you a realistic look at what the X95 is and is not. And it is a splendid weapon that you’re really going to like shooting.

This article is a two-for-one because I specifically procured the X95 so as to attend a low-light class. One of the hardest environments to conquer is darkness. Try running a poorly designed weapon in the dark and you’ll quickly understand the term “abject frustration.” But the best way to overcome the specter of fighting in darkness is to embrace it!

Talon Defense is run by my good friend Chase Jenkins. Chase is a 20-year-plus LE veteran. He’s one of those guys who was just born to teach. He has an exuberance for instructing, and it shows. To date, I’ve attended 52 various firearms training courses, and 24 of those have been with Talon Defense.

Talon Defense is a mobile teaching company, and I caught them at the Double Tap Training Grounds in Calera, Alabama, for the Low-Light Carbine course. Like all Talon Defense classes, this one was a focused series of exercises designed to vet each shooter’s skill level and build from there. Chase puts you through a series of drills, such as a dot-shooting drill designed to split your attention so deeply that you’ll forget that the sum of five and three is eight. And yes, that’s a drill you’re going to have to attend the course to see what it’s about.

As we got into the drills—barrier work, ground work, primary- and support-side shooting, and the like—I vacillated between shooting the X95 and working my cameras. After all, somebody’s gotta work. I left the rifle where it was easily accessible and encouraged other students to pick it up and work with it.

I had set it up with a prototype two-point sling from Basham Slings. If ever there was a “one size fits all” sling, this is it. It’s a two-point sling that’s made entirely from 0.25-inch shock cord encased in mil-spec webbing. Each end has a quick-detach (QD) socket and that’s it. There is no other hardware anywhere on the sling. The X95 has five QD sling attachment points so finding your happy place isn’t difficult.

Several students took me up on the offer to run the gun, and I watched each of them carefully. The weapon, by its design, is very intuitive to use. About the only thing you have to show someone is where the bolt release is. Once that’s done, it only takes a few rounds before you’re delivering fast, accurate shots at all distances.

I also set the rifle up with an Aimpoint Micro T-1 sight on a LaRue LT751 QD mount. This setup is low, precise and never loses its zero no matter how many times you remove and replace the sight. It also plays nice with the X95’s integrated backup sights that fold down into the top rail. The front sight post has a tritium insert, which is a nice touch.

The bottom and side panels of the IWI Tavor X95’s forend can be removed to expose Picatinny rails for mounting accessories. For this course I removed the bottom panel, with its integral hand stop, and adhered a fourth-generation Inforce WML on the bottom Picatinny rail. Normally I’d place the light on the side for thumb activation. However, I had attended the Low-Light Carbine class before and was well aware of Chase’s penchant for making us work targets at distance (75 yards) with nothing but your light of choice.

Light placement becomes an issue when you have to ring steel through a very narrow slot on a barrier. Suddenly, your Gucci offset mount is a problem because you can’t get your optic and light on target at the same time and still wedge your rifle through an opening about the size of a knocked-out brick. As it turns out, by turning the Tavor X95 on its side, you can shove its very narrow profile through most openings and get the job done. 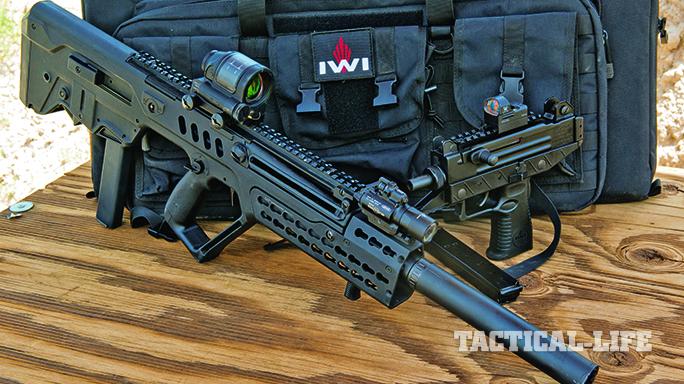 When you work with a rifle at a class, you’re able to stop thinking about “testing the weapon” and just do the work. Heavy use either proves or disproves the design of a weapon. And I’m pleased to say that the X95 absolutely soars. Some have spent a fair amount of time griping about the fact that you can’t get sub-MOA performance from the X95. So what? The IWI Tavor X95 is a combat rifle. It’s designed for the world of close-quarters battle. At 50 yards, I was hitting 6-inch swinger plates on PT Hostage targets from Action Targets. In other words, it does what it’s intended to do—and does it well.

The IWI Tavor X95 gives you all the performance of the 5.56mm NATO when fired from a 16.5-inch barrel; it’s overall length is just slightly longer than a collapsed 7.5-inch-barreled AR-15. Think about that. As far as I’m concerned, the IWI Tavor X95 is a bullpup done right. If you’re serious about bridging the gap between CQB and intermediate ranges, the Tavor X95 is for you. It’s an accurate, soft-shooting rifle with a long piston system that eats up recoil. And once you have an X95, I highly suggest you come out to a Talon Defense carbine class and learn your rifle inside and out. There’s no better way to learn than doing the work.

Many thanks to IWI US for loaning me this great rifle, and to Talon Defense for doing such an excellent job of providing dynamic training that meets a real need. Finally, I’d also like to thank Double Tap Training Grounds for providing a venue that allows low-light training on such a large scale. For a review of the popular Jericho 941 from IWI, please visit PersonalDefenseWorld.com.