"It’s no wonder that the Kaiser Monarch is getting so much attention from military and law enforcement agencies. It’s extremely lightweight, accurate and also has the ability to operate flawlessly in the harshest conditions."

Eugene Stoner’s extensive knowledge of alloys made the modern battle rifle possible. The former WWII Marine knew that only key components of the rifle needed to be made from hardened steel. Parts like the barrel and bolt required tough steel that would hold up to the pressure of cartridges like the 7.62mm NATO. But other parts, like the receiver that held the magazine and trigger group, could be made of lightweight aluminum alloy. 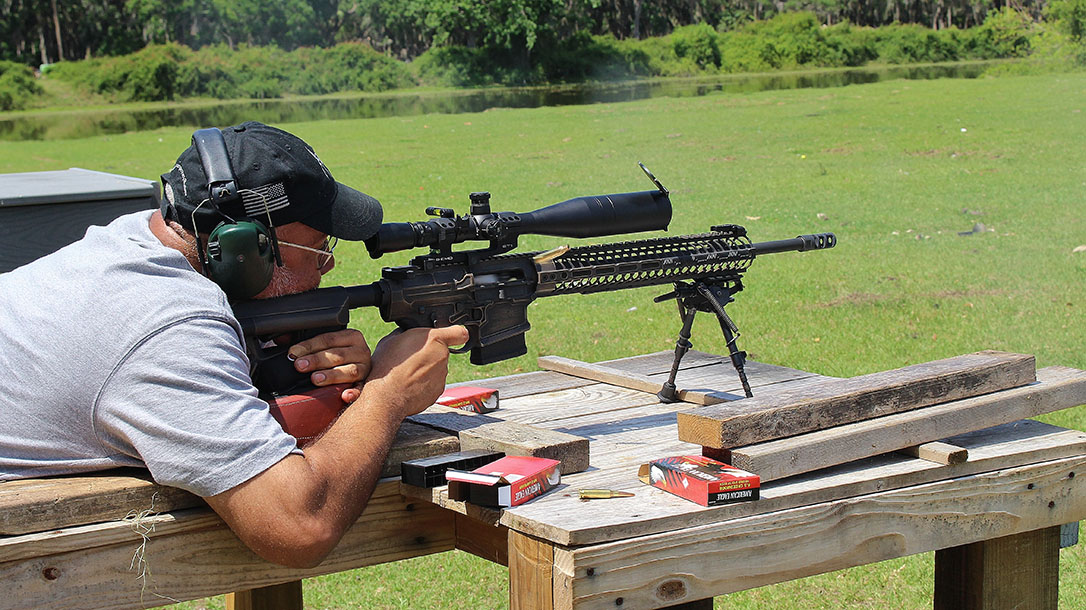 Working for Armalite, then a branch of the Fairchild Engine and Airplane Corporation, Stoner was privy to some of the most advanced alloy blends and machining techniques of the day. His AR-10 and subsequent AR-15 and M16 designs were met with derision and downright contempt from traditionalists who opined that the guns would never hold up. Close to 70 years later, we know those pundits were wrong and his designs, in different variations, have been in every scrap the U.S. has been involved in worldwide ever since. It’s doubtful that anyone could foresee guns becoming any lighter when Stoner debuted his designs in the 1950s, but evolution never rests.

I suppose it was only natural that someone would try to make an AR-15 lower from plastic, and over the years there have been more than a few different companies who have tried to injection-mold AR-15 lowers from polymer. Most have been failures, however, and you can see such defective lowers failing badly on the internet. Offhand, I can specifically name four companies who have tried and failed miserably. Sadly, some of them are still pumping out receivers for unsuspecting customers. There is an exception, though.

Kaiser Shooting Products (KSP) manufactures upper and lower receivers from a proprietary blend of composites that are reinforced in critical areas and specifically engineered to withstand hard use in the real world. Mike Bietsch, a man who knows guns and, more importantly, tool-making, injection molding and compound-blended polymers, is the owner and founder of KSP.

Mike Bietsch has always been a gun guy, but not always a gun manufacturer. He started in Chicago as a journeyman mold-maker and also put himself through school to become a tooling engineer. Along the way, he worked for Motorola, building injection molds for the cell phone division and then spent some time as a K9 officer and trainer in Florida for a large law enforcement agency. But an opportunity in southern Arizona lured him away.

Besides meeting and marrying his wife, Veronica, who now runs the administrative end of KSP, Bietsch was hired by a meter company. He was tasked with designing injection molds for plastic casings used for water meters. Once that was accomplished, he was instructed to build a fixture to test the casings’ strength by blowing them up with water pressure. The casings’ ability to withstand incredible pressures inspired Bietsch to think about building AR receivers. His first step was to study what was already on the market and discover why they were failing.

Early manufacturers of polymer receivers made some serious errors. The first ones were made to standard aluminum receiver dimensions; unfortunately, the polymer that was used did not have the same structural integrity as the aluminum alloy. It’s not unusual to see failures at both the barrel nut and receiver ring areas of these polymer receivers.

Bietsch spent two years developing a design with Solidworks software before actually cutting a mold. Aluminum inserts are used to reinforce critical areas. These inserts are machined and then tumbled to remove the sharp edges before being sent off to the anodizer. The inserts are then overmolded, a process that involves molding the polymer around the part, locking it forever in the receiver. Vital areas like the receiver ring, barrel nut, and hammer and trigger pin locations are all reinforced. The resulting upper receiver does not possess a forward assist, but it does have a special polymer dust cover.

Bietsch’s blend of polymers is proprietary, and he claims it is stronger than most major manufacturers’ polymer pistol frames. He used a team of polymer compounders to develop an ultra-strong formula utilizing short and long fibers. The upper and lower weigh just 10 ounces together, compared to 16 ounces for traditional aluminum receivers. That’s a whopping 37-percent reduction in weight.

At first, KSP just marketed receiver sets, but now the company is building complete guns. I recently received a sample X-7 Monarch rifle for testing. Weighing just 4.88 pounds unloaded, it is a gun so light that it has attracted the attention of numerous federal agencies and military units. Designed to run dry, or without lubrication, the Monarch is perfect for hostile environments, like the desert Southwest and also coastal areas where humidity and salt water can turn a finely tuned weapon into a pile of rust.

To keep the guns as light as possible, Bietsch machines his own titanium bolt carriers. Weighing 30-percent less than a traditional bolt carrier, Bietsch then has the part coated with a DLC-like finish, which increases the surface hardness and adds a degree of lubricity. Bietsch also plates the bolt and gas key with Robar’s NP3 finish for ease of cleaning, corrosion resistance and lubricious characteristics.

KSP also outfits the Monarch with a 16-inch Faxon Gunner barrel. It features a traditional government profile up to the gas block and then a pencil profile forward of that. This keeps the barrel from producing a thermal shift that skinny barrels are sometimes known for yet gives the gun great handling characteristics. Faxon button rifles the barrel with a 1-in-8-inch twist rate and uses the QPQ process to finish the 4150 chrome-moly-vanadium steel. The barrel also has a 5.56mm NATO chamber so it can readily shoot surplus ammo as well as any .223 Remington loads without pressure or extraction issues. Over the years, I’ve fired a number of guns with Faxon barrels, and every one of them has been a shooter.

The Monarch utilizes a mid-length gas system that reduces port pressure and helps reduce wear by lowering the bolt carrier’s velocity, which generally makes the gun shoot softer. A 15-inch, free-floating, aluminum handguard covers the barrel and gas system and gives the rifle clean, uncluttered lines. It has M-LOK slots for attaching lights, lasers and other accessories, and the top rail gives shooters plenty of space for optics and night vision. I like this handguard because of its slim dimensions; it also allows me to easily throw my thumb over the top for a “C-clamp” hold.

My test sample had a standard AR trigger in it. Of course, there’s no reason it couldn’t be retrofitted with a match trigger of some sort; the KSP lower uses the same exact pinhole locations as any other AR lower. My rifle’s trigger broke at just over 6 pounds with the creep that usually accompanies standard triggers. Despite the less-than-ideal trigger pull, it really didn’t affect my ability to fire the gun accurately.

To test the Monarch’s accuracy, I used a Trijicon 1-4x24mm AccuPoint scope set up in an American Defense mount and fired all of my groups from a stable shooting bench using a rifle rest for support. I also brought along a variety of premium ammunition in different bullet weights to see if the 1-in-8-inch-twist barrel had a preference.

Three of the five test loads produced sub-MOA groups, with the single best group coming from Federal’s 69-grain Gold Medal Match BTHPs. The Monarch just wants to shoot! I’d also be curious to see just how much I could shave from the group sizes by using a more powerful optic and installing a match trigger. That’s a project for another day.

For field shooting, I mounted a Trijicon 1.5x16S Compact ACOG on the Monarch’s receiver rail. This little sight features a 2-MOA dot reticle with a ring around it. It weighs just over 5 ounces, and its circle-dot aiming point is illuminated by a fiber-optic light collector during daylight and tritium in the dark. I set up my MGM BC-C Zone target at 25 yards and practiced hammering it with two shots. My average time between shots was 0.17 seconds This is about as good as I have ever gotten with any AR-15, much less a 4.88-pound rifle. You’d think that weight savings would be offset by a lack of control, but that wasn’t the case here.

I haven’t shot a 3-Gun match since I had my ankles replaced; if I could, I wouldn’t hesitate to use the Monarch. In fact, Bietsch tells me that there are several highly ranked competitors using KSP receivers as the basis for their competition rifles. 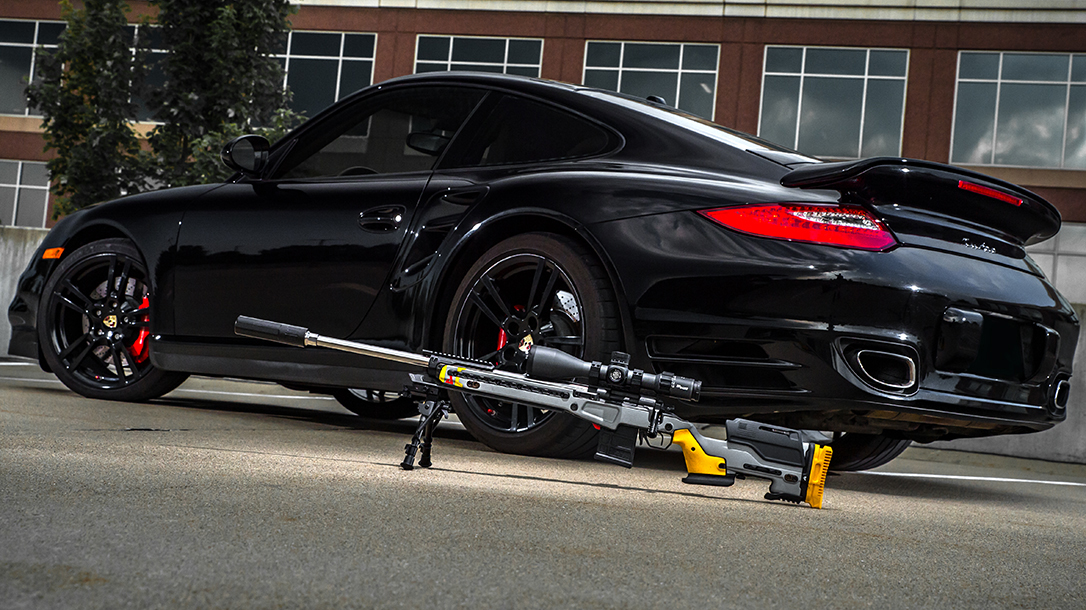 It’s no wonder that the Kaiser Monarch is getting so much attention from military and law enforcement agencies. It’s extremely lightweight, accurate and also has the ability to operate flawlessly in the harshest conditions. KSP also sells complete rifles like the Monarch with a number of different options. There’s even a very short and handy pistol version available; for those who like to build their own, upper and lower receiver sets are also available.

When I interviewed Mike Bietsch, I asked him if there was anything new on the horizon. He’s currently working on a new collapsing buttstock design that is easy to deploy and extend when exiting from a vehicle. It has a triangular cheekweld design that is extremely ergonomic and a single-point sling attachment socket molded into it. After looking at his prototype, I can predict, without a doubt, that it will be tremendously popular with operators and wannabes.

But the really exciting news is that Bietsch is currently working on a design for a .308 rifle with polymer receivers. If it’s anything like the Monarch, it will redefine just how light a service rifle can be. Like I said, evolution never rests!