K&M Arms M17S308: A Big-Bore Bullpup in a Compact Package

The Austrian and British armies have relied on bullpup battle rifles since 1978 and 1985, respectively, and the French army used one from 1978 to 2017. But outside of a few law enforcement agencies, bullpups never really caught on here in America. I speculate that they failed to meet the high expectations of a nation of sporting riflemen increasingly accustomed to higher and higher levels of accuracy and reliability. 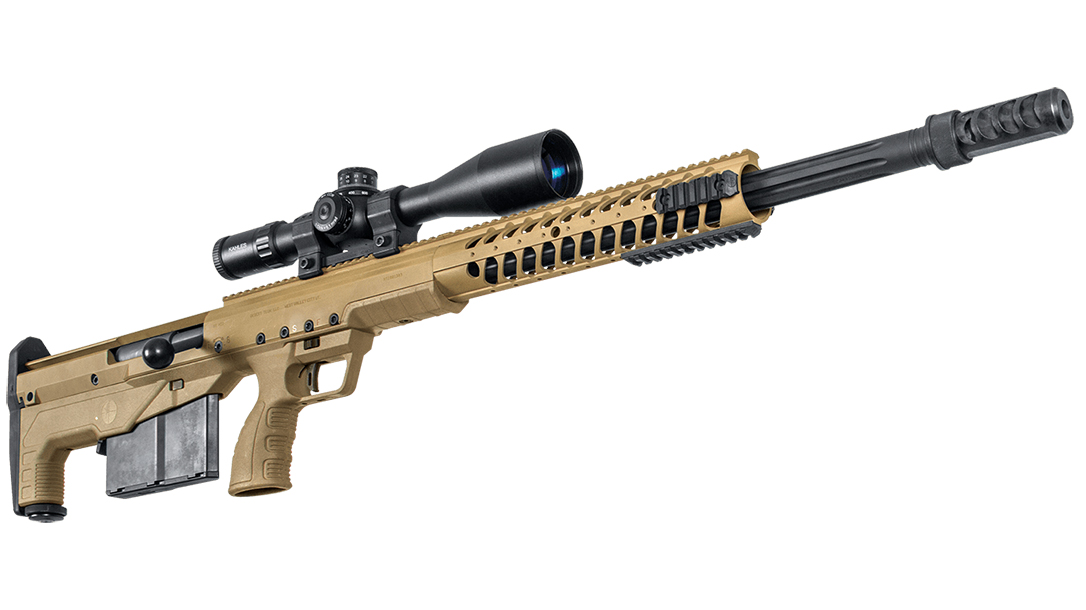 But that’s all changing. In the last few years, domestic makers have come up with an unprecedented number of innovative new rifles and shotguns that are worthy of the attention they’re getting. Engineer Ken McAlister, the owner of K&M Arms in Chandler, Arizona, demonstrated how good a bullpup could be by introducing his M17S series rifles in 2008. Don’t confuse these with the old Bushmaster-manufactured guns of the same designation—those went out of production in 2005. K&M Arms trademarked the name, redesigned the Bushmaster platform to address its many flaws and started producing what the company calls “the next generation of bullpups.”

These rifles aren’t your grandpa’s bullpup. The trigger pull alone is perfect and user-adjustable from 3 to 5.5 pounds. The 5.56mm model came first, followed by the .308 Winchester/7.62mm NATO version, which is the focus of this story. Obviously, bullpups in such large calibers aren’t that common. But McAlister approached the project intent on maintaining the unique advantages of the bullpup style while improving its reliability, ergonomics and accuracy to get it on par with conventional rifles.

The K&M Arms M17S308 is surprisingly simple in design. It has four basic components. The upper receiver comprises the first component. It utilizes thick extruded aluminum with an integral handguard. The front half is extensively cut away for ventilation and the mounting of proprietary accessory rails, which are included with the rifle. Everything attaches to or fits inside this upper, and the remarkable thing is that it’s subject to no internal wear. It’s quite roomy inside, which allows plenty of airflow to aid in cooling and should also greatly reduce the chances of a foreign object smaller than a pebble jamming the action.

Should you be concerned about the upper having adequate strength to contain an out-of-battery discharge, McAlister designed it to do just that. The non-reciprocating charging handle mounts on either side of the upper as you prefer. A bolt-on shell deflector reinforces the ejection port at the back, so brass never beats on the port opening.

The second major component is the barrel/piston assembly. The Greenwood barrel features button rifling with a 1-in-10-inch twist rate and nitride treated for long wear and corrosion resistance. Just above the barrel a short-stroke gas piston system adjusts to seven different positions using a flat-head screwdriver. The first three clicks are for suppressor use. The next three are for normal firing. The last setting shuts off the gas flow entirely, enabling the rifle to fire as a single shot.

A direct-impingement system would’ve been lighter and simpler, but who really wants a lot of hot gas heating up the receiver right under their face? The piston system runs cleaner and cooler. Amazingly, the barrel mounts in the aluminum upper receiver with only three screws and some red Loctite. Two anchor into the bottom of the barrel extension and one secures the gas block. It seems impossibly insecure, but in fact it’s just the opposite. Remember, McAlister’s been an engineer for 30 years, and all of these details were carefully analyzed during the rifle’s design stages.

The third component is the bolt assembly, which looks distinctly retro. The heat-treated and black-oxide-finished steel bolt carrier rides on three NP3-plated steel rods rigidly screwed to a steel backing plate. It’s reminiscent of the bolt guides from the M3 subgun from WWII. The rotating bolt head is triangular-shaped with three locking lugs, like those used on some .50 BMG rifles. It rotates 30 degrees during lockup and engages more surface area than the AR-15’s eight-lug bolt head. Sometimes AR bolts shed a lug under stress. McAlister chose the three-lug bolt because it’s already demonstrated that it can handle .50 BMG pressures. If you’re going to overbuild any part of a rifle, this is where it should be. The bolt head also uses dual ejector pins because testing showed that reliable ejection was impossible with a single ejector.

To strengthen the rotating bolt head, McAlister choose not to drill a hole all the way through for the cam pin like the AR-15 bolt head—a common breaking point. Instead, he cut a shallow slot on the surface to facilitate the rotation with a short cam pin. The bolt carrier group also includes a third bar without a spring to tap the bolt head back into position to strip a round off the magazine at the end of the recoil stroke. A small spring-loaded plunger would’ve saved some weight, but the solid bar was unfailingly simple and indestructible.

The fourth component of the M17S308 is the lower receiver, which is machined from a billet of 6000 series aluminum. This is the serial-numbered part. It secures to the upper with two AR-10 push pins. You simply push those out with your fingertip to field-strip the gun. At the rear of the receiver, a spring-loaded vertical pin keeps tension between the upper and lower to remove any accuracy-robbing wiggle.

For compactness and to increase the space between the shooting hand and magazine, McAlister pushed the action and mag well as far back as he could. Thus, with a 16-inch barrel, the M17S308 is 26.25 inches long—a quarter-inch longer than the minimum required length—while offering a length of pull 1.25 inches longer than a standard AR’s. This makes it a little more comfortable for bigger shooters. You can also switch out the pistol grip for the AR pattern of your choice.

The M17S308 accepts SR-25-pattern magazines. The rifle features a flared mag well, and the mag release is ambidextrous, with a standard button on the right and a lever on the left. Loading and reloading takes a little practice, but I found the extra space and the paddle release on left side made this rifle easier to handle than most.

No sights are included, so you can mount whatever you’d prefer along the vented, 12.5-inch Picatinny rail on top. For accuracy testing, I used a Vortex Optics Diamondback 1.75-5x32mm scope and shot from a benchrest, with an SME Bullseye camera system set up downrange to accurately record my groups at 100 yards without having to take several walks. For fun, I also shot the M17S308 off-hand and prone with a Brownells/EOTech CQB T-Dot sight. And let me just say that once it’s on the shoulder, the M17S308 is very fast. The majority of the weight is close to the body, where it’s easiest to support, and that makes it easier to shift from target to target than a conventional rifle.

The muzzle rise and recoil were quite mild, and the bullpup was easier to keep on target in rapid fire than any conventional semi-auto .308 I’ve used. A muzzle brake would cut down on recoil even further, as the birdcage-style flash suppressor included with the rifle provides no such reduction. If you do add a muzzle brake, McAlister strongly advises having the brake’s first venting port (closest to the shooter) oriented vertically, perpendicular to the barrel. The others can go any direction as long as the one closest to the shooter goes up and down to disrupt the gas blast of the following vents and keep them out of the shooter’s face.

At $1,999, you can’t call this rifle inexpensive, but it’s a lot of bullpup for the money, and McAlister designed it for versatility and ease of maintenance. He used off-the-shelf springs and ejectors from DMPS. The gun takes any AR-type grip, any Sig-Sauer-pattern magazine release and any muzzle device designed for 5/8×24-tpi threading. The aluminum has a durable hardcoat anodized finish, and the gun uses inexpensive Magpul PMAGs.

Though I tested a model with 16-inch barrel, 20-inch barrels are also available, and owners can buy an extra and switch them out on the kitchen table with a Harbor Freight heat gun, Allen wrenches and Loctite. K&M makes the parts so precisely that they will headspace correctly. The gun comes with two ready-to-mount 2.5-inch rail sections that install in the vent holes on the sides of the upper. K&M also makes a snap-on Kydex cheekrest and quick-detach front sling swivel base.

This rifle delivers a lot of accurate firepower in an incredibly compact package. McAlister says it was meant purely for the civilian market, but I could see police agencies taking an interest because this rifle would be highly effective against vehicle attacks we’ve lately seen terrorists perpetrate in crowded urban areas. In a home-defense scenario, I’d pity the bad guys. Personally, the thing I’d like to do most with this rifle is take it hog hunting. 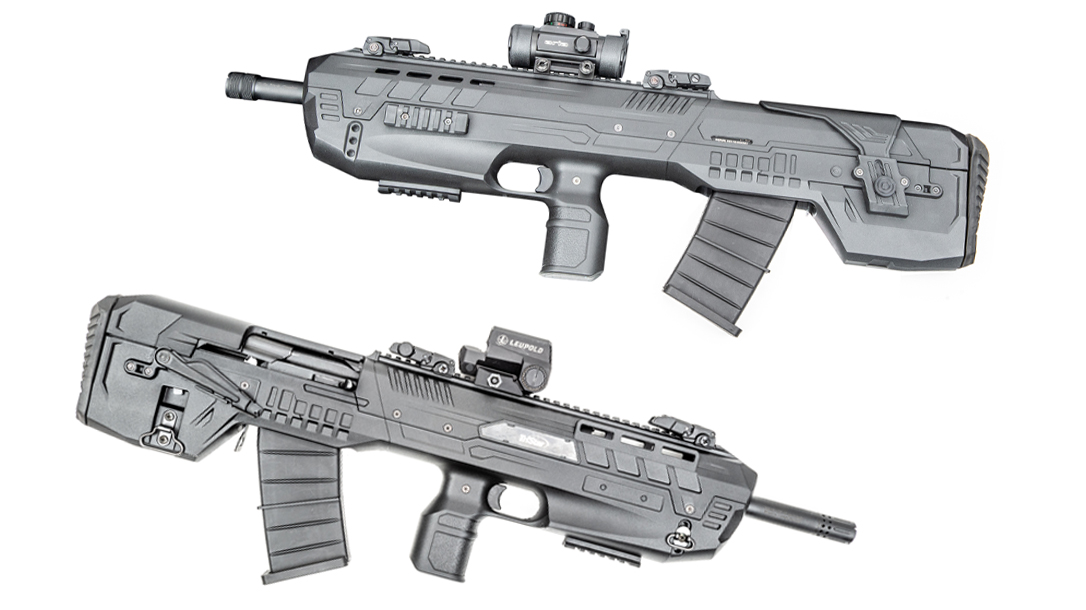