It all began as a relatively modest enterprise. Fairchild Engine and Airplane Corporation was, as the name implies, a large aerospace consortium in the 1950s. The company built military aircraft during and after World War II and ultimately brought us the A10 Warthog, the manliest combat airplane of all time. In 1956, Armalite was a tiny little subsidiary of Fairchild headed up by George Sullivan. He met a guy named Gene Stoner at a California shooting range, hired him on as chief engineer and the rest, as they say, is history. The legacy cemented would one day become the M4A1. 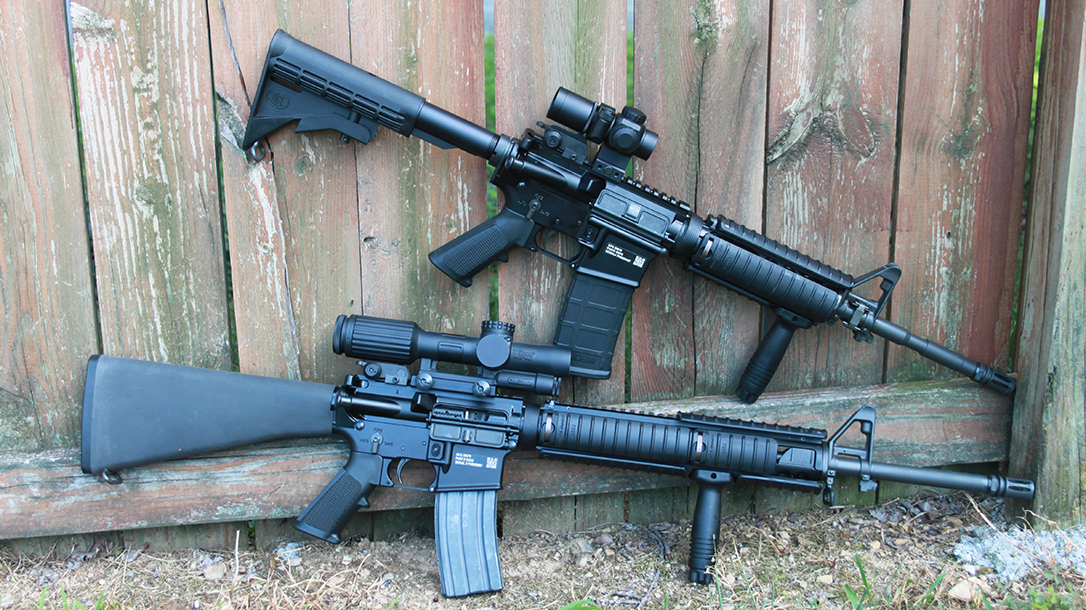 The 7.62x51mm AR10 started it all, but the subsequent small-caliber AR15 really had the bigger impact. It took decades, but eventually every major military in the world adopted a small-caliber, high-velocity infantry combat round. That original M16 was controllable, accurate and almost unnaturally lightweight.

Weight is everything to a soldier. I stripped my MREs down to desirable components before we went out on an operation and culled absolutely everything I could from my gear before a long forced march. When it comes to personal weapons, the lighter the better so long as combat effectiveness is retained.

The M16’s teething problems have been exhaustively documented. Confusion regarding powder selection and bureaucratic bumbling conspired to make this revolutionary rifle’s combat debut a less-than-stellar event. However, proper maintenance, a few critical improvements and a little experience with the weapon made it a reliable and effective combat tool. By the time I wielded an M16A1 back in the 1980s, it was a mature platform.

In 1983, the USMC adopted a product-improved version called the M16A2, and Big Army fielded the upgraded weapon three years later. The A2 was a pound heavier than its predecessor and sported improvements like a more robust handguard, redesigned pistol grip, better sight system and heavier barrel. When we swapped our A1s for A2s, we just stacked the old rifles into gigantic cardboard boxes for shipment to Lord knows where and drew our A2s at the same facility.

The M4 Carbine began as the Colt Model 727 in the mid-’90s This hybrid combination of the M16A2 and the Vietnam-era M177 Carbine was intended to replace the M3A1 Grease Gun along with the M9 pistol and M16A2 rifle in certain applications where a full-sized, bulky rifle might be impractical. The weapon’s 14.5-inch barrel was maligned at the time as being inadequate to accelerate the 5.56mm round to its full potential at long ranges. However, two decades’ worth of combat experience has shown the rifle to be both adequately lethal and popular with troops.

The real strength of the M4 Carbine was its versatility. By swapping out components it was found that a single modular chassis could become much more capable than the otherwise unadorned host gun. This remarkable adaptability was first manifest in the SOPMOD kit.

The United States Military is veritably drunk with acronyms. SOPMOD stands for Special Operations Peculiar MODification. It was the result of the Special Operations Special Technology (SOST) Modular Close Combat Carbine Project incepted in September of 1989 and consummated in 1993. The Naval Warfare Center Crane Division was the executing agency. The SOPMOD kit was composed of a collection of non-developmental and Commercial Off The Shelf (COTS) accessories packaged to support four M4A1 carbines.

The beating heart of the SOPMOD kit was the Knight’s Armament Company (KAC) Rail Interface System (RIS). This perforated, railed forearm allowed sundry optics, grips, lights, lasers and other accessories to be swapped out between rifles as the mission demanded. With this basic loadout as a foundation, other components could be added later, or remnants of other team’s kits could be cannibalized to add stuff as needed.

The original SOPMOD kit came with a single M203 grenade launcher. Later additions included the M26 Modular Accessory Shotgun System, the HK M320 grenade launcher and various EOTech Holographic Weapon Sights (HWS) and accessories. By mixing and matching components, operators could configure their weapons to their individual preferences—something that had not previously been common in a massive Army bureaucracy absolutely addicted to standardization.

SOPMOD’s effects were felt well beyond the confines of the Special Ops community. This system worked and worked well. As a result, combat units throughout the military adopted components of the system. Additionally, SOPMOD awakened the sleeping dragon that was the civilian commercial market for tactical weapons and gear. As a result, the annual SHOT Show in Vegas now attracts 60,000 people, and rail-mounted black rifle accessories have become appropriate water cooler chatter from sea to shining sea.

Some components of the SOPMOD system are difficult if not impossible to acquire on the civilian market. However, if you have sufficiently deep pockets or, as was the case in my situation, started early enough, you can come really close. The foundational chassis is obviously a rifle.

The M4 is a selective-fire combat rifle with a three-shot burst limiter. The M4A1 is also selective fire but offers a full-auto function without the burst device. Fortunately, I bought mine back in 1987 before they cost as much as a car. While I enjoy making brass rainbows as much as the next rabid gun nerd, full-auto operation of a shoulder-fired carbine is really only appropriate under some fairly narrow circumstances out in the real world.

The barrel is a 14.5-inch GI-standard tube, and the rest of the components are otherwise unadorned GI components as well. Our flattop upper accepts any conceivable optic, and the buttstock is mil-spec. The end result is about as close as a civilian gun guy can come to a GI carbine.

The M203 is from Lewis Machine & Tool. Most military contractors couldn’t care less whether civilian shooters have access to their products. LMT is different. They can set you up with an operational grenade launcher along with the accessories to run it well.

Transferring one of these devices technically requires a licensed Destructive Device dealer, something about as common as fiduciary restraint in Washington, but the BATF will allow them to transfer through a conventional Class III firearms dealer on a case-by-case basis. The paperwork for the transfer is the same as it might be for a short-barreled weapon, machine gun or sound suppressor. None of that is a challenge, though the wait can seem interminable.

Our sound suppressor comes from Advanced Tactical Ordnance. Lightweight and efficient, I have long ago burned the paint off of mine and never slowed it down. While a sound suppressor on a rifle firing supersonic loads will not make the resulting package silent by any stretch, it definitely eases communication in enclosed spaces, enhances control of the weapon and makes you a more neighborly shooter.

Our sight is an EOTech XPS3 with a pivoting G33 magnifier. The Holosight uses a laser-produced hologram to project an aiming reticle out to infinity. I can’t quite wrap my brain around the physics of how that works, but it is remarkably effective. The G33 magnifier sports 3x magnification and pivots in and out of the field of view in an instant. These sights are as precise as a surgeon’s scalpel and as robust as an armored fighting vehicle. This is the same combination that purportedly dispatched Osama bin Laden to his gory reward.

The rest of our gun sports a GI-standard M203 leaf sight and a Vickers Combat Applications Sling (VCAS). Designed by Larry Vickers, a career Tier-1 Special Operator who has indeed seen the elephant, the VCAS is versatile and easily adjustable. The VCAS can be configured in dozens of ways to accommodate any taste, build or weapon.

While those early Vietnam-era M16s ran about 6.5 pounds unloaded, a fully tricked-out M4 with all the bells and whistles is boat-anchor heavy. The gun is no worse than the Thompsons and BARs our forebears used to free the planet from tyranny, but it is nonetheless a handful on a long forced march. The upside to all that mass, however, is that the gun is imminently controllable.

Holding the gun at the ready for long periods gets tedious, but singles and doubles at close range are spot on. The HWS offers a wide, uncluttered field of view and a proven reticle design. Literally nothing is faster. Slap the magnifier in place and it allows accurate fires out to a couple hundred meters or more.

A sound-suppressed, full-auto M4A1 with a grenade launcher in place is dreamy on rock and roll. Muzzle climb is thoroughly negated with trivial attention to technique, and the can excises all the nasty out of the gun. It nearly eliminates all muzzle flash, and a disciplined trigger finger can cycle doubles and triples with ease.

M781 40mm training rounds splash a bit of orange powder on impact downrange and, as a result, earne the affectionate nickname of “Cheetos” by our troops. These loads are fun if a bit underwhelming and are commercially available at around $7 to $10 each. M781 rounds mimic the trajectory and recoil of live HEDP (High Explosive Dual Purpose) grenades. To get real utility out of a civilian-owned M203, however, one need look no further than reloadableshells.com.

That company offers a variety of exotic, legal 40mm loads ranging from a simple 12-gauge adapter to radical shells that fire four .410 rounds simultaneously. They also allows you to build up your own custom antipersonnel loads at home. The quality is top flight, and the engineering inspired. I have used these things to throw flechettes, buckshot, birdshot and slugs. Recoil with heavy loads is present without being onerous. The muzzle flash from basic 12-gauge birdshot in dim light is, quite frankly, breathtaking.

The military is struggling to replace the M4A1. The rifle’s ergonomics are unimpeachable, and the gun’s capacity for customization is unparalleled. With a grenade launcher in place, the system, though heavy, can offer precision rifle fire out to a maximum range of 500 meters and can place HE rounds on an area target out to 350. The weapon proves effective and reliable both day and night in some of the harshest environments on the planet. A fully accessorized M4A1 will remain a superb combat tool for American forces serving downrange for some time to come.

This article is from the April-May 2021 issue of Tactical Life magazine. Grab your copy at OutdoorGroupStore.com.