What does a government do when it has hundreds of millions of rounds of surplus ammunition? A logical choice is to build a weapon to shoot that ammo. After Yugoslavia had built 1.2 million Zastava M48 bolt-action rifles from the late 1940s to the mid-1960s, the Yugoslav army needed a modern rifle to put its hoard of 8x57mm Mauser ammo to use. Specifically, the Yugoslavs wanted a semi-automatic squad DMR, and the M76 was born. 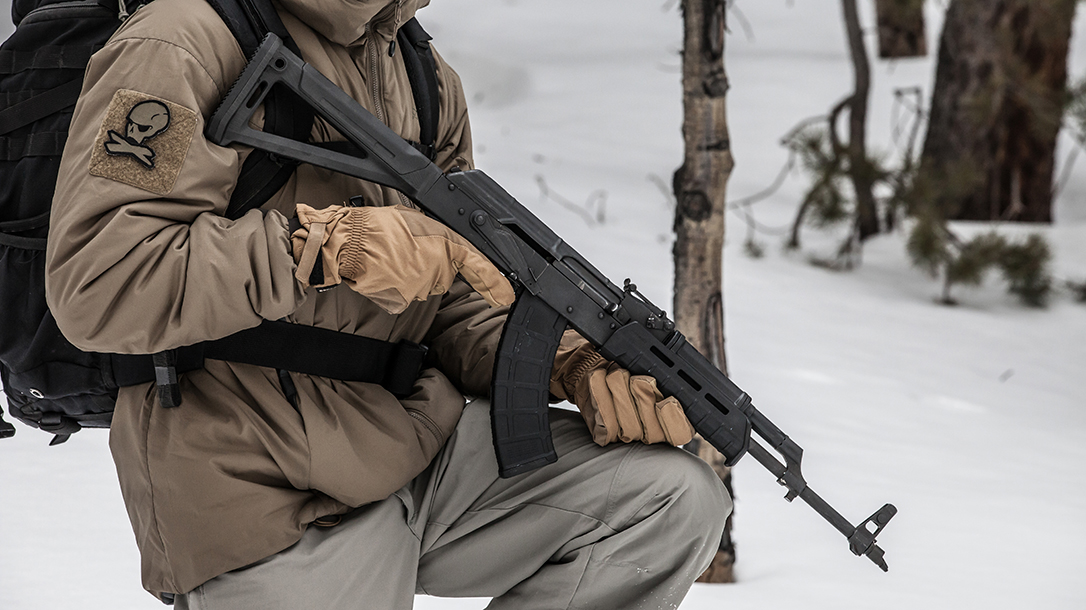 When the Soviets designed the SVD, or Dragunov, they chambered it for the powerful 7.62x54mm rimmed cartridge. That helped the Soviets use their stores of ammunition and manufacturing capabilities to create more rounds originally designed for the 1891 Mosin-Nagant bolt-action rifle. Faced with similar circumstances, the independent-minded Yugoslavs went another route.

Several years ago, Zastava Arms began exporting M76s, which the company had been building for years. Based on the AK-47, the M76 looks like a longer, stretched-out version. One American importer brought several M76 systems into the U.S. and then sold them to the public. Afterward, the BATFE’s technical branch found a way to label the M76 as a prohibited weapon. The agency discovered that those first imported M76 rifles retained the auto sear feature, qualifying the rifle as a machine gun in its eyes, even though the M76 was never intended to be fired in full-auto. (That qualification is applied to any semi-auto with an auto sear or with a cutout in the receiver to accept one.) Ultimately, the BATFE tracked down every one of the M76 rifles that had been sold and then confiscated and destroyed them.

It appears the engineers at Zastava had taken the Communist-supplied technical data package for the AK-47 and scaled it up for the 8x57mm cartridge. They ignored the auto sear feature and left it as part of the M76’s design.

Fast-forward several years. Century Arms of Delray Beach, Florida, figured out how to offer the M76 legally to the public. Steven Kehaya, Century’s engineering and product development manager, had the company mill new, legal-for-sale semi-auto receivers and make new 4140 ordnance steel barrels. Using the new barrels and receivers, along with TAPCO trigger assemblies and refurbished M76 parts kits, Century Arms built the M76 Sporter rifle—a gun any serious ComBloc-firearms aficionado would want to own. And while this was a few years ago, and Century no longer offers the gun in its current catalog, you can still find the model on the secondary market.

Century’s M76 Sporter precisely matches the specifications of the original M76. Without a magazine or optic, the M76 weighs 10.25 pounds. Its overall length is 44.5 inches, and the 21.5-inch, button-rifled barrel is cut with four grooves and has a 1-in-9.5-inch right-hand twist rate. The buttstock, pistol grip and upper and lower handguards are made of native teak. The stock on my test sample looked like it lacked a sealing finish; either it was removed in the refurbishing process or had never been applied.

The M76 Sporter can fire 8x57mm Mauser ammunition with a variation in muzzle pressure by virtue of a three-position gas regulator. That also lets the rifle keep running when dirty. The regulator is adjusted by rotating a ring held in place with a spring clip. The test rifle arrived with the regulator in the first position, and testing was conducted without adjusting the gas setting. A sling attachment point is attached to the front of the gas block assembly. A corresponding rear sling attachment with two wooden screws is located on the bottom of the buttstock.

When the rifle is fired, powder gases are diverted into the gas cylinder on top of the barrel. The elongated AK-style piston drives to the rear, and the bolt carrier, which is attached to the piston extension, travels back until gas pressure drops. When the bolt carrier is on its way back, it resets the hammer. The recoil spring, which is compressed on the backstroke of the bolt carrier, strips a fresh round from the magazine and chambers it. When the bolt comes to rest, the bolt carrier continues forward a little more than 0.5 centimeters while the bolt’s two locking lugs engage the recesses in the barrel extension. The trigger mechanism in the M76 Sporter finds its inspiration in the M1 Garand. Close inspection reveals that the trigger uses a twisted, multi-strand mainspring.

The AK-type safety selector is on the right side of the receiver. As with the AK-47, the fully up position is “safe” and fully down is “fire.” The magazine latch is a paddle, and magazines must be rotated into position like AK magazines. The rifle’s 10-round, sheet-metal magazines use a staggered-column, dual-position feeding style that incorporates a stainless follower. My test rifle came with two magazines.

The AKM-style front sight is threaded and has a cylindrical post with protective lobes. The front sight is adjustable for windage and elevation, using specifically designed tools or a simple punch and hammer. Underneath the front sight assembly is a bayonet-mounting lug. I can’t fathom why a sniper rifle needs a bayonet, but the M76 Sporter has one. I guess it makes as much sense as some of the Japanese crew-served machine guns that wore bayonets during World War II. If you’re familiar with the flash suppressor on a U.S. M14 or some FN FAL variants, you’ll recognize some similarities to the M76’s muzzle device, which carries five equally spaced slots that do a fair job of cutting muzzle blast and flash signature.

The rear sight is a sliding tangent type with an open notch. Like all European rifles, the rear sight is user-adjustable for elevation out to 1,000 meters in 100-meter increments. Just behind the 100-meter mark is the battle-sight setting, which equals the 300-meter sighting position for 198-grain, 7.92x57mm Yugoslav M49 ball ammunition.

Along with the pair of magazines, my test rifle came with a Yugoslav wire-cutting AKM bayonet. In application, the bayonet is mounted on the rifle, and the hole in the blade is indexed with the lug on the scabbard. Hook the scissors-like apparatus over a wire, and then level the rifle down to shear it.

Century offered the M76 Sporter with an original-issue 4X ZRAK ON-M76 scope with a range-finding reticle. The top center chevron in the scope’s field of view is used as the main aiming mark. The horizontal hash marks are for windage and lead corrections and can be used as mil marks for ranging, too. In the bottom-left corner, a stadiametric rangefinder correlates to a 5’9” tall man and can be used to determine distances from 200 to 800 meters.

Those familiar with the PSO-1 scope fielded on the Russian SVD and Romanian PSL will recognize the ZRAK’s reticle. The idea is to put the baseline at the target’s feet, and the corresponding stadia will line up with his head. Then it’s just a matter of reading the distance to the target, dialing in the scope’s elevation and sending a 198-grain M49 FMJ on its way. This optic was developed with a tritium power module to light the reticle. Because the half-life of tritium is shorter than 13 years, it degraded below the point of illumination long ago. The lighted portion of the reticle no longer works.

To mount the ZRAK ON-M76 scope, a side rail that accepts an alloy dovetail mount with a clamping lever is permanently attached to the left wall of the rifle’s receiver. This mounting bracket also allows you to use night-vision scopes and other optics. The mount can be detached from the receiver rail quickly by moving the locking lever from the front to the rear. The scope remains zeroed when removed and then reinstalled. During rifle cleaning chores, the scope can be removed so you can access to the receiver cover and bolt carrier. This rifle’s AKM-type iron sights can be used with the scope in place.

Curious about the M76 Sporter’s capabilities, I set a target on my 100-yard backstop and rested the rifle on front and rear bags for support. A Shooting Chrony Beta Master chronograph set 15 feet from the muzzle measured velocities. 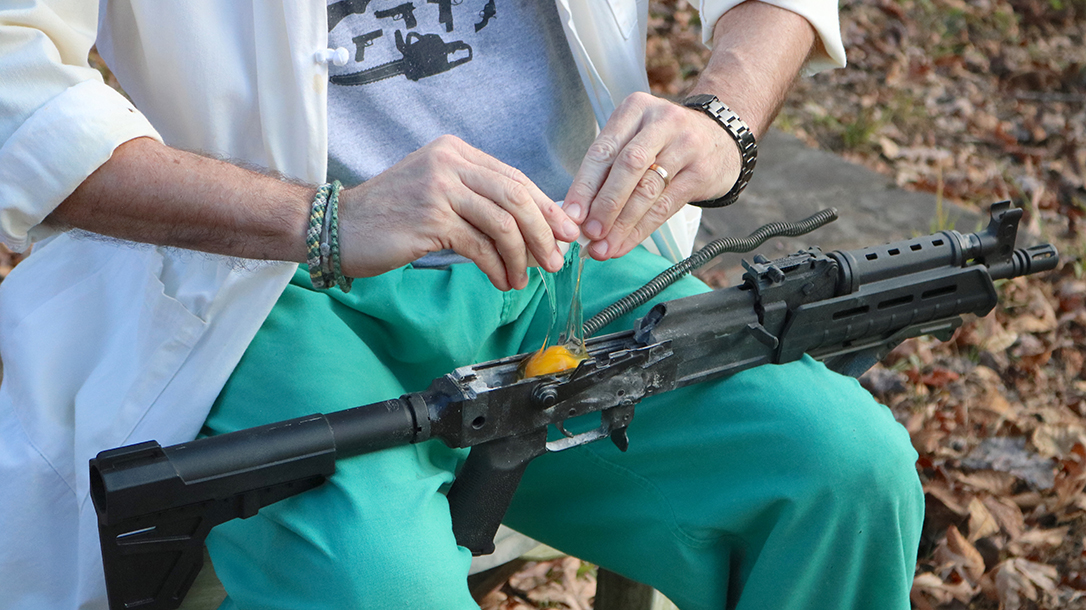 After zeroing the rifle with 198-grain Yugoslav M49 sniper rounds, I fired 10 five-shot groups. The average group size was 3.25 inches. This ammunition comes Berdan primed, brass cased and corrosive. The headstamps on the rounds varied from 1947 to 1954. Note that any shooting session with corrosive ammunition should be followed with a thorough barrel cleaning. A 10-shot string fired across the chronograph averaged 2,392 fps.

To give the M76 a good comparative testing with factory-loaded American ammunition, I used Winchester’s 170-grain spire-point (SP) hunting load. The average of four groups showed that this load was rather consistent at 3.39 inches. One of Hornady’s 8mm bullets is a 196-grain BTHP that seems tailor-made for this rifle. So I cooked up a handload using resized Winchester brass, CCI 200 large rifle primers and 46 grains of Varget powder. The average group size here was just under 2.3 inches.

When you’re ready to own a piece of history that saw service on both sides during the Balkan civil wars, an M76 Sporter is the only way you can do it in America today. The M76 Sporter was a hot seller for Century Arms, owing to its desirability as a scaled-up AK designed for sniper. And, again, while the company no longer offers the rifle directly, check secondary sources online. You’ll be glad you did.

Bullet weight (and powder for the handload) measured in grains, velocity in fps by chronograph and accuracy measured in inches for the best 5-shot groups at 100 yards.