by Sean Utley
in Guns, Rifles
0

McMillan is only making 100 special-edition rifles that replicate Chris Kyle’s original TAC-338. Each comes with a Harris bipod, a Leupold Mark 4 scope, a special display mount, a flag, two challenge coins and a box of custom .338 Lapua Magnum ammo.

“Have you ever heard of Chris Kyle?” a man asked as I sat in the airport, waiting out another delayed departure. He had noticed the firearms-branded cues on my shirt and hat and was intrigued. 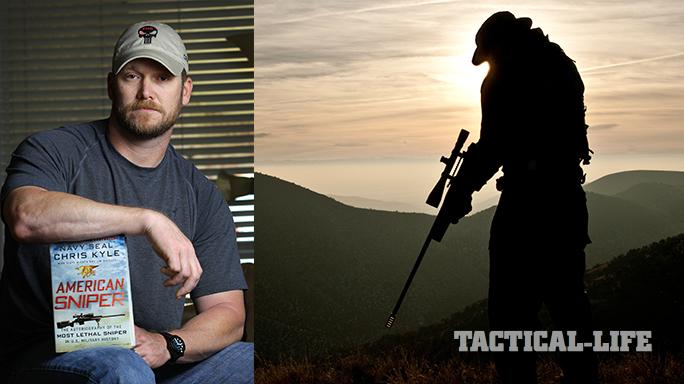 As I nodded, he said he’d recently read Chris Kyle’s book, “American Sniper,” and how impactful he thought it was. This man had no military background. He was simply a business owner traveling with his wife, with four boys at home.

He continued to say how moved he was by the book, the efforts Kyle made and the man that Kyle was—so much so that he’d brought a veteran who was struggling with post-traumatic stress disorder to work at his business. Ironically, just minutes before that exchange, I was struggling with how to open this piece, worried that my words would not do Kyle justice. Instead, someone else provided those words and reinforced the impact Kyle had on so many Americans. His legacy is profound and further underscores how imperative it is to appropriately honor him.

One of the most recognized tributes to Kyle is the movie “American Sniper,” and if you’re reading this, it’s almost a guarantee you’ve seen it. If you’re an avid shooter like me, you paid close attention to the authenticity of the weapons used throughout the film. One of the sniper rifles used in the movie was a replica created by McMillan Firearms, and although there were no efforts to make such iconic firearms available to the public back then, the company is doing just that now with the TAC-338 bolt-action rifle.

When I was told of the plans to build a clone of the rifle Kyle used, I was both excited and concerned. There is a lot that can go right, yet so much that can go wrong—and those sentiments applied to my coverage of such a weapon. I was honored yet petrified.

My nervousness was quelled when I learned that McMillan Firearms planned to build the gun as closely to the exact specs as the company did for Kyle in 2004, from the action, barrel, rail, trigger and stock to the screws and hardware—even if that meant stepping backward in technology to do so. True authenticity. Not only that, but two of the original gunsmiths who worked closely with Kyle to outfit the TAC-338 he deployed with are on the project.

“I wanted to be on board to make sure that the project was done right—that I could do everything I could to make it as right as possible and to pay tribute to the legend,” said Dave Arnberger, one of the original builders of Chris Kyle’s personal McMillan TAC-338.

As I spoke with Arnberger, his insistence on the appropriateness of this project was evident. He and Kyle developed a friendship and relationship that can only come from such a process. They nursed beers together and shared laughs, and Arnberger’s children spent time with the legend.

Arnberger and I spent considerable time talking, and unfortunately, all of our discussion can’t be shared. But understand that he and Don Hagerman, the other gunsmith responsible for outfitting Kyle’s legendary TAC-338, are committed to this rifle being done right and, perhaps more important, for the right reasons.

Although Kyle used a .300 Winchester Magnum for most of deployments, his most famous and longest shot was taken with a McMillan-built TAC-338. According to Arnberger, between Kyle’s third and fourth deployment, Kyle and Ryan McMillan discussed how insurgents were beginning to pick up on the .300 Winchester Magnum’s range limitations. So, McMillan decided the company should get Kyle a .338 Lapua Magnum. That extended his engagement ranges and would eventually allow for the 2,100-yard kill for which he’s famous. McMillan had been producing TAC-338s at the time, but none had been used in theater. Conversely, Canadian snipers were using the TAC-50 successfully at that time. On November 27, 2007, the company began work on Kyle’s TAC-338.

During the process, Arnberger contacted Jeff Hoffman of Black Hills Ammunition for a few cases of .338 Lapua Magnum ammunition; although the inventory was low and mostly accounted for, Hoffman made sure he got what he needed. A few modifications were made to the cheekpiece of the McMillan A5 stock to enhance its durability, too.

McMillan is pulling out all the stops for this limited run of TAC-338s. Each gun, of 100 total, will be made to the exact specifications of Kyle’s original rifle with only one real difference—the manufacturer on the receiver will read “McMillan” instead of “McMillan Bros.” McMillan Bros. no longer exists as a company, so the name can’t be used. Still, the same style of font that was engraved on the original rifle will be used along with everything else.

As you can imagine, the project spawned much debate within the McMillan team. In an effort to stay true to the original rifle, older technology will be employed. Parts and components will be recreated, such as the McCann Industries rail. It’s no longer produced, but McMillan is having the rail made for this special run.

The McMillan Bros. MCRT receivers were made from 17-4 stainless steel bar stock and fitted with 9310 steel bolts. The clones will be made to the same specifications and include Robar’s NP3 coating on the bolt. Original serial numbers were engraved with “XXXRLL,” where the “RLL” designates right-hand, long-action Lapua. Only one of the clones will receive that serial number sequence; the rest will be engraved with a “CKXXX,” with “CK” obviously denoting Chris Kyle.

Current McMillan receivers are CNC-machined, but the clones will be made like the originals on manual mills and lathes, and the machine shop responsible for making the receivers will be called back into service, as well as the same person responsible for cutting the bolt raceway. The barrels will also be turned manually like before.

More features include a Jewell trigger, Badger Ordnance bottom metal and a Schneider 27-inch, 1-in-10-twist barrel. The firing pin assembly on the original rifle was a special version created by Rock McMillan; that will also be included on the special-edition TAC-338. A McMillan A5 stock will be installed, of course. “We’re even resurrecting the old cheekpiece hardware,” Arnberger said.

Dale Poling of EliteIron was contacted for the original muzzle brake, and he was happy to oblige. A Turner sling and Harris 6-by-9-inch bipod will also be included. The nuts and bolts will also be the same. Everything will be period correct.

The type of glass used on Kyle’s TAC-338 is a somewhat sensitive topic. Arnberger said it left their shop with a Leupold 8.5-25x50mm Mark 4 LR/T scope with an illuminated reticle. Purportedly, Kyle used a Nightforce, and the SEALs were using Nightforce scopes at the time, so he switched optics after he was in theater. The clone will receive the Leupold glass.

To keep the TAC-338 Chris Kyle rifle in its original visual glory, it should be finished in tan spray paint. But there are some things you shouldn’t do, no matter how authentic they might be, although Arnberger said the team discussed this. Instead of Krylon, the Kyle clone will receive a tan Cerakote finish on the entire gun, plus the optic and rings. This color will match the original paint scheme.

I’m sure you’re wondering how much a TAC-338 Chris Kyle clone will cost. The MSRP will be $15,000, a price tag I expected for such a period-correct collector’s piece. Sure, you could buy a regular TAC-338 in tan, but you’ll still need an optic; by then you’ll be more than halfway there. You’ll be missing most if not all of the original parts used and lack the authenticity that comes with them. You won’t have the “CK” serial number, either, and it won’t be one of 100.

It’d also be void of the other specially selected and designed accoutrements, including a custom-crafted wall display mount that matches the wood of an ammo box containing 50 rounds of limited-edition .338 Lapua ammo. This ammo will have a “CK-AVF” headstamp. Also inside the case is an American flag, two challenge coins and a custom-designed belt buckle from the silversmith who crafts the American Valor Foundation memorial buckles. 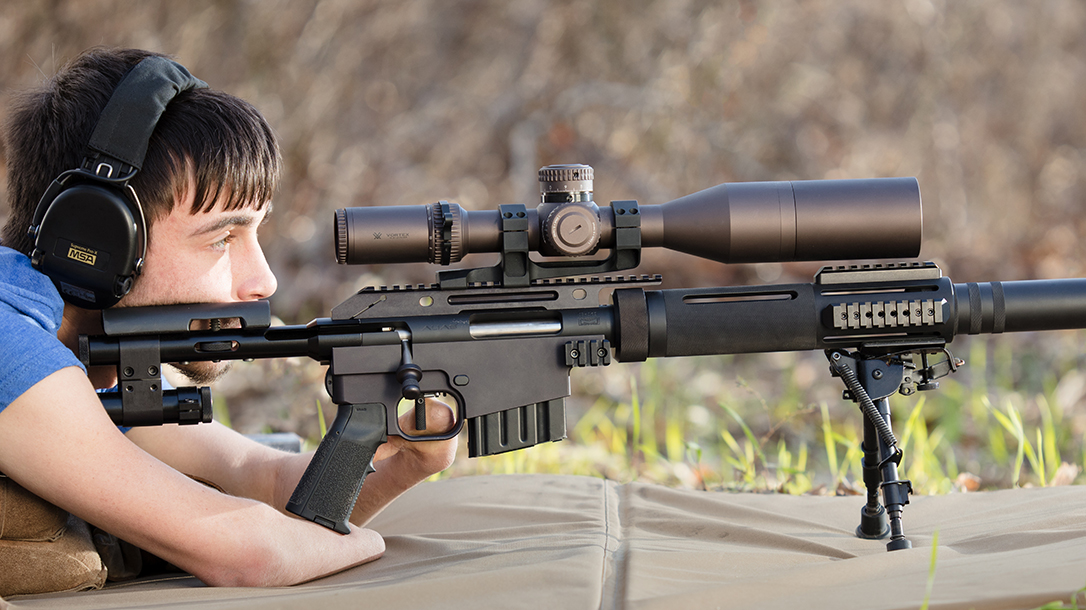 Some of you might scoff at that price, but others will not. The bigger concern should be how the kit will be perceived. Like you, I was intrigued as to why McMillan embarked on the project now. Strategic Armory Corp., the parent company that owns McMillan, approached this carefully.

The official statement reads: “After meeting the Kyle family and reading about the way in which the American Valor Foundation was making a difference in the lives of so many, I knew that we would not rest easy until we found a way to contribute. What started as a personal project soon turned into a passion. We realized that by doing this, we were in fact preserving a piece of American history in a world looking to rewrite the past. We wanted no detail to be overlooked. This piece tells a story. Not only of one man, but of all the individuals who volunteer their time and opportunities, who forfeit a civilian lifestyle, for the love of their country and their reverence for the beliefs of the Founding Fathers.

“This project honors their stories and the families they leave behind. Working with the American Valor Foundation and the Kyle family put everything in perspective for us. To be able to support the heroes who serve us has been a great honor and a truly humbling experience.”

A portion of each rifle sold will go to the AVF, which was established by Kyle’s father, and the group will auction the first clone with serial number CK001. Obviously, only a few will get to own a TAC-338 Chris Kyle clone. Even fewer rifles will actually be shot, although Arnberger hopes this isn’t the case. “Rifles were meant to be shot,” he said.

Although I agree, I acknowledged that I probably wouldn’t shoot it if I owned one.

Chris Kyle commemorative, it’s amazing. In person, it’s striking, even with its monotone finish. It’s difficult to revere what Kyle accomplished in his life and service to our country yet not be somewhat mesmerized by the tools he used to preserve so many lives. As shooters, it’s natural for us to want to more closely understand who he was and how he accomplished so much. Sadly, so many of us never met him. A commemorative piece such as this helps some feel closer to a man who inspired everyone from an avid shooter like me to the average businessman in an airport.