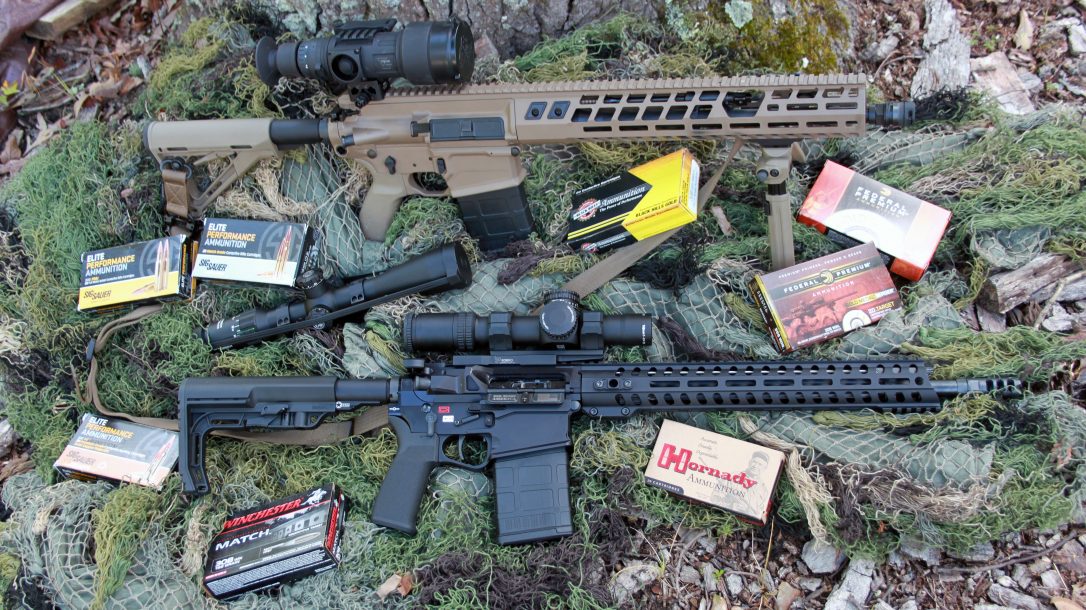 For a rifle to be considered versatile it must be able to satisfy multiple roles with equal aplomb. Viable rifle candidates for this title are the POF-USA Revolution DI (POF REV) and SIG Sauer 716G2 DMR chambered in 7.62mm (.308 Win.). The combining of the AR platform with the increased power represented in the 7.62mm cartridge is a defining feature of both rifles. The duo also provides another interesting chapter in the piston vs gas debate. 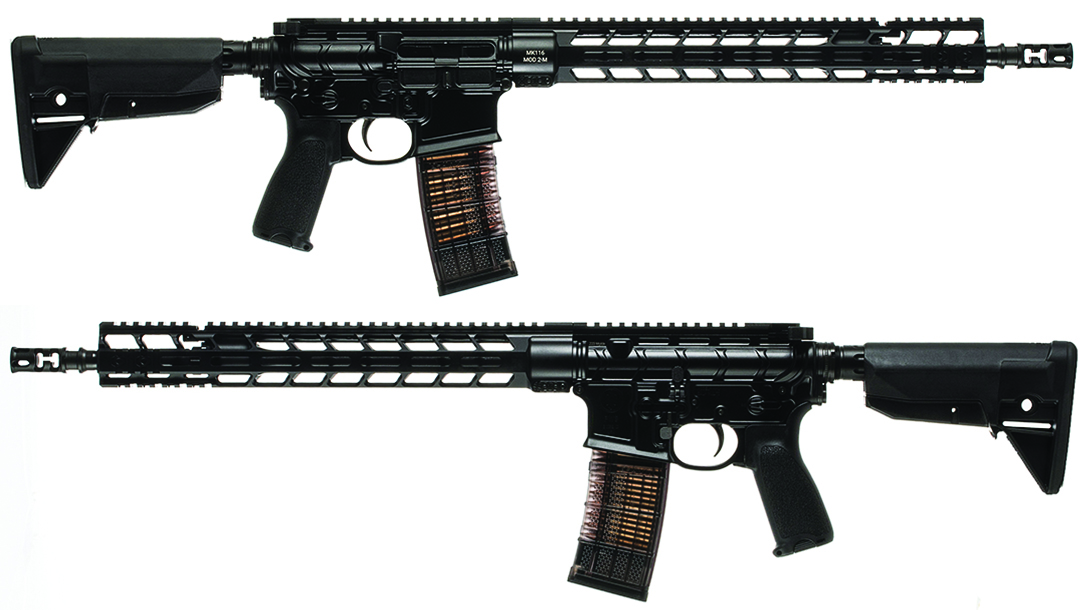 In general terms, ARs come in two patterns and two operating system—AR-15 and AR-10, either direct impingement or piston driven. The AR-15 is most associated with 5.56mm and AR-10 with .308 Win. Many would characterize the AR-10 as an AR-15 on steroids with its larger size, larger caliber and heavier weight.

The AR-10 actually predates the AR-15. Eugene Stoner first introduced the AR-10 in 1956 in a hasty effort to compete against the M14 in the U.S. Army weapon trials. Stoner designed the AR-10 around his now famous direct-impingement gas operation combined with innovative straight-line barrel/stock design using composite and forged alloy parts. In 1957, the basic AR-10 design was scaled down and substantially modified by ArmaLite to accommodate the .223 Rem. cartridge and given the designation AR-15, with the rest being history.

Without a doubt, the POF-USA Revolution AR rifle will change users’ thoughts on how an AR-10 rifle can be configured. From the beginning, POF-USA charted its own path in enhancing the AR platform with innovative features. Often, the AR-10 is associated with an unwieldy profile, weighing substantially over 9 pounds. POF-USA has made a conscience effort with the Revolution to harness 7.62mm power within an AR-15 frame, offering users superior terminal ballistics while maintaining svelte handling.

POF features that have created a cult-like following are present on the Revolution DI along with some new ones. Fully ambidextrous billet receivers, a high phosphate nickel-coated bolt carrier group and a match-grade single-stage trigger are some examples. The Revolution DI measures 34 inches (Mission First Tactical stock collapsed) and weighs 6.8 pounds. The POF Rev features a 16.5-inch 1:10 twist fluted chrome alloy barrel that is nitride heat-treated for full corrosion resistance. A POF-designed triple port muzzle brake aids in recoil management and flash suppression.

POF-USA will never be accused of being stagnant or resting on the designs of others. Multiple examples of this exist with Revolution beyond the already impressive weight/frame dimensions. POF-USA’s patented E2 dual-extraction method consists of four small channels cut into the walls of the chamber allowing a small amount of gas pressure to push against the neck of the spent case. This pressure assists in extraction by breaking the seal between the chamber and case as well as pushing the spent case to the rear as the extractor is pulling to the rear. This removes a tremendous amount of work that would otherwise be left up to the extractor.

The POF patented, oversized 3-inch-long heat sink barrel nut is another significant improvement. The POF barrel nut is much more efficient at heat dissipation than the standard AR barrel arrangement. Additional benefits are an operating rod better supported to the bolt carrier, strengthening the upper receiver for when accessories or a vertical foregrip is mounted.

The SIG 716G2 DMR evolved from the previously introduced SIG DMR candidate. SIG Sauer was responding to military end-user requirements, technology improvements and customer feedback. The number one impetuous for the G2 version was to remove as much weight as possible without sacrificing accuracy. The G2’s short-stroke piston system had its mass reduced by 80 percent, bolt carrier group given a diet, different buttstock furniture provided, barrel shortened to 16 inches and integral, one-piece forend slimmed down. A 20MOA slant is built into the rail to benefit long-range scope adjustments. Overall weight reduction is more than 3 pounds, down to 8.5 pounds! That is damn impressive to say the least. Other changes with the G2 DMR consisted of an easier-to-adjust gas valve and a bolt face featuring dual ejectors.

The 716G2 DMR tested was the Cerakote FDE variant arriving with Magpul CTR adjustable buttstock and 20-round Magpul magazine. The thought process here may be weight savings. The CTR specs at just over 0.5 pounds. Another possibility is a nod to a more general-purpose role for the 716G2 DMR versus strictly precision/sniper based. If a user desires an alternative rear stock, the Magpul PRS buttstock would be a good place to start. Another Magpul add-on worthy of consideration would be the recently introduced bipod that attaches directly to an M-Lok rail without need for an adapter.

The SIG 716G2 DMR being piston driven might raise the eyebrows of readers who subscribe to the mantra of direct-impingement AR rifles being inherently more accurate than piston designs. SIG Sauer has figured out the short-stroke operating system in terms of accuracy, thanks to countless hours of research and testing. Understandably, Sig is not eager to share full details of its proprietary hard work figuring out the details enabling such a high degree of accuracy.

The SIG 716G2 DMR has an opening in the forend rail to enable access to the gas valve. I am sure placement of the gas port was a key part of the accuracy equation that SIG worked on during development of the 716G2 DMR, with Sig not wanting to sacrifice usable rail length to accommodate valve placement. Piston operation simplifies suppressor use with a setting provided on the 716G2 DMR. A Sig two-stage match trigger arrives with the rifle.

My guiding thought for the POF Revolution DI and SIG 716G2 DMR was to treat each to scenarios involving handling and ability to send multiple rounds downrange quickly and effectively. Working in and around vehicles as well as a “jungle walk” range provides this type of realistic feedback.

The test included a Trijicon AccuPower 1-8x28mm optic with 34mm tube mounted on the railed upper receiver of each rifle. The 1-8x power range offered by the AccuPower solves any conundrum posed by other more limited optic magnification options. I have come to rely on the Trijicon 1-8x for many of my recent rifle reviews, thanks to its magnification range allowing for close-range training evolutions with the 1x illuminated reticle as well as making it easy to engage targets with greater precision at distance, thanks to the 8x.

Drills started out by evaluators working around simulated cover while engaging designated targets in and around EVTC range vehicles to get a “feel” for the rifles. Scenarios where then set up to force magazine changes as well as moving to various firing points. Eventually, the POF Rev DI and SIG716G2 was moved to within vehicle confines, where evaluators fired on targets from the range vehicles, as well as quickly exiting the car while maintaining rounds sent downrange. Steel targets are struck with awesome authority when 150-plus grains smack into them, especially from close range. It is easy to tell the difference between 5.56mm and .308 Win. impacts at any distance.

The lighter weight of the POF Revolution DI is hard to compete against for any other AR-10 type rifle on the market. The added weight of most AR-10 platforms compared to the smaller AR-15 negates inherent AR qualities of handling in many user’s mind. The combining of AR-15-like handling with the increased power represented in the .308 Win. cartridge is the key to the POF Revolution’s allure.

After strong 100-yard accuracy performances by both rifles, the 300-yard and 750-yard tests were eagerly anticipated. A Sig Sauer Tango4 4-16x44mm scope was mounted. The Tango4 offers a low 4x power setting for quick target acquisition at close range, with only a turn of the knob to 16x for longer precision shots.

The sub-MOA accuracy exhibited at 100 yards by the SIG 716G2 DMR proved invaluable at extended ranges. The POF Rev more than held its own, especially considering accuracy was not its first mission requirement. Firing at paper targets produced 2.25- to 3.75-inch groups at 300 yards, depending on load used. If I did my job reading wind conditions, the SIG 716G2 DMR produced solid strikes on the steel targets out to 750 yards.

The SIG 716G2 DMR and POF Rev DI proved more than capable of engaging small steel poppers located inside the EVTC range vehicles on the 250-yard EVTC berm; some of the scenarios involved firing through the front windshield. An interesting side note is that the all-copper SIG Sauer 150-grain HT load is a top consideration for this type of engagement. The round is a more reliable performer for barrier penetration compared to match-type bullets thanks to its all-copper construction. Sig specifically tweaked the 150-grain HT for AR-style rifle feeding via bullet nose geometry and utilizing premium nickel-plated shell casings. 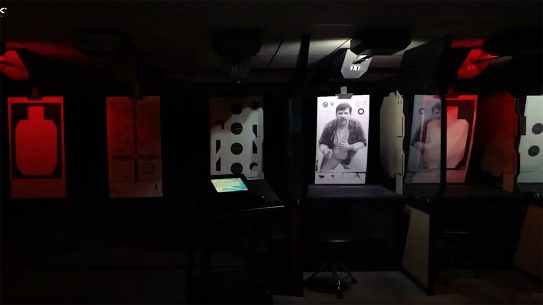