Romanian versions of the AKM have long been among my favorite variants in the AK world.

The foregrips are a real aid to shooting full-auto models, and they help control the semi-auto Romanian rifles better in rapid-fire, too.

The original Romanian AKs were the Pistol Mitraliera model 1963 (PM md. 63), with a fixed stock, and the PM md. 65 with an under-folding stock. Operating the PM md. 63 and PM md. 65 is basically the same as using an AKM. But the PM md. 63 and PM md. 65 differ subtly: The foregrip slants forward on the PM md. 63 but rearward on the PM md. 65 to allow the folding stock to full collapse. Another distinctive feature of these rifles is the lack of a muzzle brake, though the muzzle is threaded and usually has a muzzle nut. Always an important feature for rifles chambered in 7.62x39mm, the bore, chamber, gas piston and gas cylinder’s interiors are chrome plated. Though non-corrosive 7.62x39mm ammunition is readily available nowadays, remaining stocks of corrosive ammo are large and turn up on the surplus market. PM md. 63 and PM md. 65 rifles often came with 20-round magazines to make it easier to reload with the foregrip in place. This was especially true with the PM md. 65. 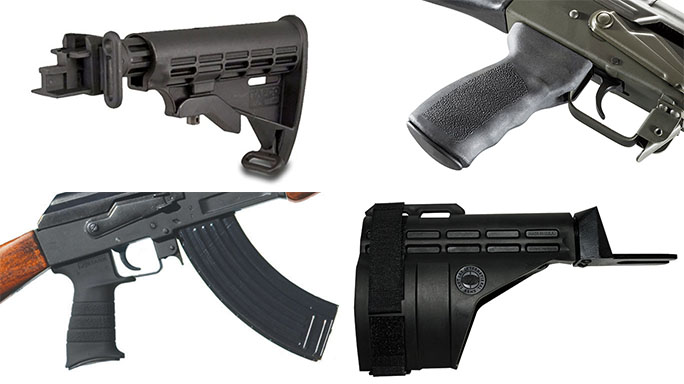 Many parts kits for the PM md. 63 and PM md. 65 have been imported into the United States. Many of those were from the version of the rifle produced for Romania’s Patriotic Guards, who were issued semi-autos. Reportedly, those rifles were produced after the Soviet invasion of Czechoslovakia in 1968, when the Patriotic Guards were formed in case the Soviets turned their attention to Romania. The rifles were designed to give the paramilitary force a weapon without a select-fire capability. They were identifiable by the black band around the buttstock and a large “G” on the sight block.

The first short-barreled Romanian version of the AKM was the PM md. 80 (also called the AIMR), which has a shorter gas block that’s combined with the front sight post to keep the weapon’s overall length down. It also uses a side-folding stock that folds to the left side of the receiver. Romanian side-folding stocks normally come straight back, curve downward and then curve around to form the butt in roughly triangular form. These are similar to those used in East Germany. PM md. 80s typically have a cone-shaped or cylindrical flash suppressor.

After the Soviet Union adopted the 5.45x39mm AK-74, Romania followed suit more than a decade later with the 5.45x39mm Pusca Automata model 1986 (PA md. 86). Rather than being a copy of the AK-74, the PA md. 86 retains some elements of the AKM. However, beginning in 1990, the Romanians also produced a similar rifle in 7.62x39mm caliber—the PM md 90. It uses a side-folding wire stock and has a slant flash suppressor/muzzle brake similar to the early Russian type.

A carbine version of the PM md 90, designated the PM md 90 cu teava scurta (short-barreled), was also introduced. It uses the PM md. 90’s standard wire stock, which folds to the right side of the receiver and incorporates many of the modifications used on the PM md. 80. Rather than being compared to the Russian AKSU (aka the Krinkov), the PM md. 90 is more comparable to the Russian AK-104, which is also a 7.62x39mm carbine. You’ll typically see its threaded barrel with either conical or birdcage-type flash suppressors. Some examples also just had a muzzle nut. You might also see PM md. 90s with or without a vertical foregrip. The handguards are typically made of wood. I’ve seen references to the PM md 90 having been produced in 5.45x39mm and 5.56x45mm NATO as well as 7.62x39mm, but I’ve only encountered them in the latter chambering.

It’s rare to encounter a short-barreled PM md 90 variant here in the U.S. I’ve not had a chance to handle or fire one of the few that were legally imported, but a friend of mine who collects Warsaw Pact weapons purchased a short-barreled PM md. 90 kit and assembled it on a U.S. receiver with U.S.-compliant parts. Other than being a semi-auto, this is a fairly accurate reproduction, and I recently got my hands on it for this article. Because I have fired select-fire Romanian PM md. 63s and PM md. 65s, I have some idea of how this platform would perform in full-auto, too.

My friend had his short-barreled PM md 90 configured with a vertical foregrip and birdcage-style flash suppressor. I have mixed feelings about the vertical foregrip on this weapon. Because the stock folds to the side, the foregrip’s position isn’t an issue. It allows you to comfortably fire the short-barreled PM md 90 rapidly in semi-auto. I’m sure I would have appreciated it even more on a select-fire gun. On the other hand, I think the foregrip affects the handiness of a carbine intended to be maneuverable in more confined spaces. The short-barreled PM md 90 was originally intended for airborne troops or armored crews. When the carbine is handled with just the strong hand on the pistol grip and the stock tucked against the shoulder while moving through brush or other growth, the foregrip can hang up on vines and other obstructions. When gripped by the support hand, as it would be when carried at the ready, this is less of a problem. I think it probably comes down to personal preference. To be honest, I think the carbine with the foregrip looks more “high speed.”

I’ve had a chance to shoot my friend’s short-barreled PM md 90 a few times and always find it an interesting AK variant to fire. The safety and magazine release are standard AK, so those come naturally to anyone who’s done a reasonable amount of shooting with AK-type weapons. The release button for the folding stock can be operated easily. It’s located beneath the hinged portion of the stock and must be depressed as the stock is folded open or closed. Unlike some folding stocks that can be manipulated with one hand, I find this one requires both. The rear sight on the short-barreled PM md 90 is only calibrated from 100 to 500 meters, as opposed the 100 to 1,000 meters on the standard PM md 90. Although the short-barreled PM md 90 I shot is fairly accurate, for me, 500 meters is  optimistic. The takedown process is similar to that of other AK-47s.

To evaluate the short-barreled PM md 90 for this article, I used Red Army Standard 123-grain FMJs and Golden Tiger 124-grain FMJs. Although it’s easier to use and reload with 20-round magazines due to the foregrip, I’ve used 30-rounders in the gun before and believed that because I wasn’t going to be in a firefight, I could change those fast enough for hitting hanging plates. I didn’t shoot paper targets or measure groups because I was more interested in reacquainting myself with the handling characteristics of this PM md. 90 variant. 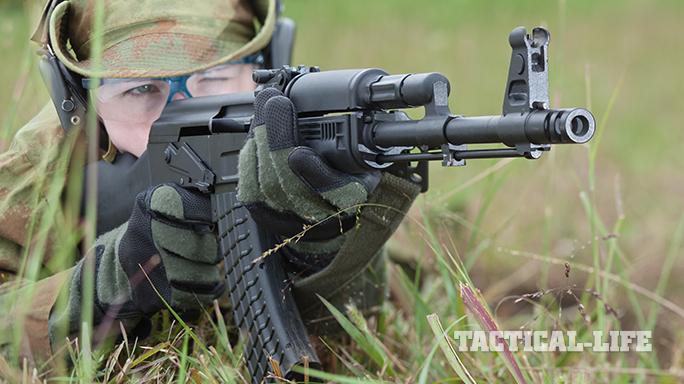 I fired about 100 rounds through the short-barreled PM md 90 at hanging plates at 25, 50 and 100 yards. In some cases, I fired a double- or triple-tap at 25 yards, then at 50 and then at 100. I guess you might say I was training for the scenario of taking out the closest first, depending on how they were armed (that is, if the guy at 25 yards had a club and the guy at 100 a heavy machine gun—you get it). The foregrip helped a lot with this drill, as my hand did not slip at all on the forearm as I changed the point of aim. The 7.62x39mm round doesn’t have that much recoil, but the foregrip helped me keep the sights on target for fast follow-up shots.

The sights were typical of the AK platform—adequate at best. Operating the safety was less than ergonomic. In fact, when I carried AKs that might be needed quickly, I often carried them with the safety off and the chamber empty, as I’ve found I can operate the bolt faster to chamber a round than the safety with a round chambered. That’s just my experience. I did well on the 25- and 50-yard hanging plates and not bad on the 100-yard plates—“not bad” meaning I got hits about half the time. At best, though, I found the butt portion of the folding stock usable but certainly not comfortable. With a heavier-recoiling round, it would have been hard to keep the butt pressed against my shoulder.

I like the Romanian series of AK variants, and I like compact and handy carbines. Based on my college logic class, that should lead to the conclusion that I like the short-barreled PM md 90. Scarcity also gives it added appeal.