"Primary Weapons Systems’ new MOD 2 upgrades have only made a strong, proven design even better."

I recently attended a training course at Altair Training Solutions’ Regional Training Facility in Florida, which used to be a high-security state prison. We ran simulations in this environment with white lights, night-vision gear and short-barreled rifles (SBRs). 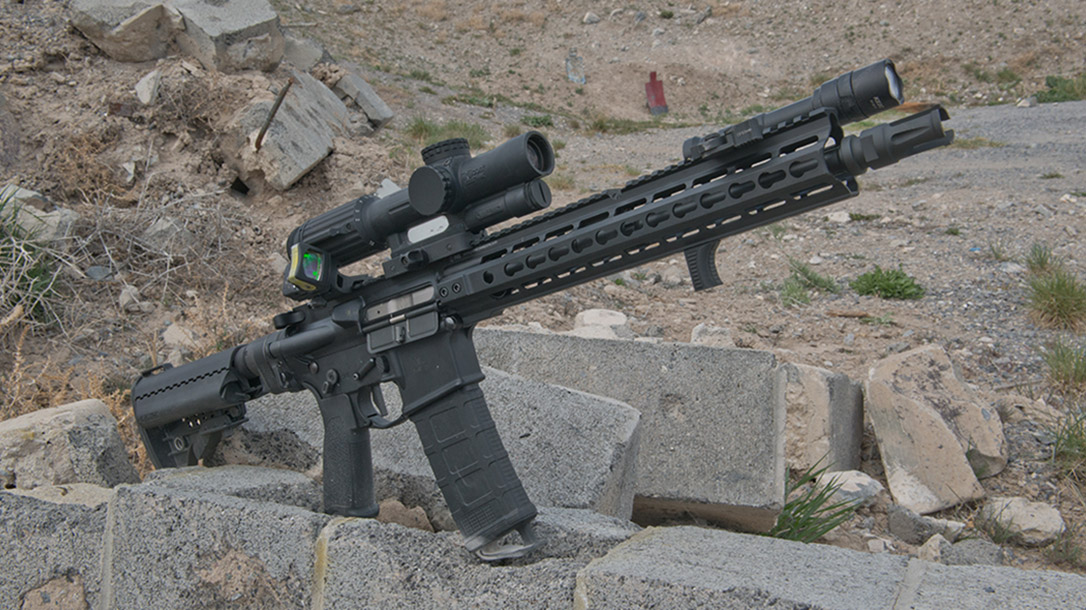 Ballistics are always a concern with really short barrels (8 inches or less), but SBRs can be incredibly effective when engagement distances are close. Of course, there are some detractors, but you’ll never find someone willing to “take one for science.” There are always compromises in the tactical world, but in close, tight spaces, shorter ARs are noticeably easier to run. They’re just a lot handier than rifles with full-length barrels.

It wasn’t that easy maneuvering around with a suppressed, 10.5-inch-barreled rifle during the Altair course, especially considering my short arms and the IR and night-vision equipment involved. So when I got home, I decided to take one of my shortest ARs from Primary Weapons Systems (PWS) and install a new stock from Maxim Defense to see if I could make an ultra-compact SBR for extreme close-quarters operations.

One of the most reliable short-barreled ARs I’ve ever tested is the PWS MK107. It typically runs a wide variety of ammunition and will also work reliably with a sound suppressor—not something every 7- to 8-inch-barreled AR can do. When PWS recently unveiled its upgraded MOD 2 rifles, I jumped at the chance to add one to my arsenal.

Strong yet lightweight, the MOD 2 upper and lower receivers are forged from 7075-T6 aluminum. The upper features a hardened bolt carrier group made from tool steel, and the lower comes with ambidextrous controls, including the safety selector, magazine release and bolt release. The enhanced trigger is factory set for a crisp 5.5-pound pull.

Now, for this specific test, I swapped out the BCM stock for a Maxim Defense CQB unit. This stock is reminiscent of the kind used on the HK MP5A3, as it rides on two rails that run alongside the receiver. The CQB stock is made of machined 7075-T6 aluminum, and it mounted easily to my registered lower. Fully extended, the stock adds 10 inches to the rifle’s overall length, or just 5.38 inches collapsed. There are also two intermediate length-of-pull positions. The CQB comes with a few different buffer options, including those set up for JP Enterprises’ Silent Captured Springs, but my test model came with a standard spring and light buffer.

Because of the MK107’s intended uses, I decided to add a Trijicon SRS red-dot sight to the flattop upper. The SRS provides a wide field of view and incredibly clear glass. You also won’t notice much “tunneling” with this sight. Backup sights are also mandatory for entry weapons, so I added a set of fixed iron sights from Daniel Defense. I mounted my SureFire X300 in front of the Daniel Defense front sight, and I included my Blue Force Gear sling. Finally, I stored everything—including various magazines—in a Vertx EDC Gamut Plus backpack to discreetly transport the weapon system.

My initial testing involved clearing rooms in a shoothouse, and this is where the MK107 MOD 2 really shined. It’s handy and easy to maneuver. Loaded with DoubleTap 55-grain TSX ammo, this SBR is plenty lethal. I was also able to keep the Maxim Defense CQB stock centered against my plate carrier for solid support in close quarters. This keeps the SBR in close so you can easily work around corners. You pretty much just drive the gun where you need to go and you’re already on target. During about an hour or so of room-clearing practice, the stock never shifted or came loose.

Shooting on a square range is easy, but working inside and around a vehicle is a different story. Thankfully, this weapon system was perfect for these situations. The PWS CQB muzzle brake sends all of the blast forward. As long as the muzzle is outside a window, for example, no muzzle blast or debris comes back your way. The recoil was also minimal, so it’d be easy to shoot this SBR with just one hand if needed. The MOD 2 lower receiver is lightweight, and the controls are excellent. In short, moving in and out of nooks and crannies, behind the wheels, over the hood—it was all very easy with the MK107. It would definitely be a solid choice for professionals who work in executive-protection details, and it’s also very well suited to home and or vehicle defense.

Thanks to PWS’ long-stroke gas piston operating system, the MK107 MOD 2 ran flawlessly on the range. In fact, this is one of the few 100-percent-reliable SBRs in 5.56mm NATO that I’ve tested. With three different gas settings. it runs with just about anything you can put in it, including steel-cased practice ammunition. And it does all of this while remaining lightweight, comfortable to shoot and accurate.

Though the rifle is really designed for close-range engagements, I tested it out to 100 yards just to see what kind of groups I’d get. My best five-shot group, produced with Barnes’ 70-grain TSX ammo, measured just 0.9 inches. This proves that the PWS MK107 MOD 2 can get the job done if you need to take long-distance shots in the real world. With the SBR rested on a barricade and shooting out to 100 yards as fast as I could center the Trijicon SRS’ reticle, I was able to keep 20 DoubleTap rounds within 2 inches. Careful aiming from an unsupported prone position at 50 yards with the same ammunition created a 1.5-inch cluster. What more could you want from a rifle like this? It’s very versatile; there isn’t much it can’t do.

Make no mistake: The MK107 is still loud—just not to the shooter. The CQB brake sends all of the blast forward, which shouldn’t affect even close teammates. But you’ll still notice it in a shoothouse, for example. Under normal rates of fire, the CQB does a good job of reducing flash, but rapid fire will occasionally produce a fireball. Of course, this is ammunition dependent, but physics still applies, and a 7.75-inch .223 barrel will leave plenty of unburned powder. You can also run the MK107 with a sound suppressor, but more gas will be blown back into your face. It’s certainly viable, but I’d prefer to just keep the CQB in place because it’s such a pleasure to shoot with on its own. 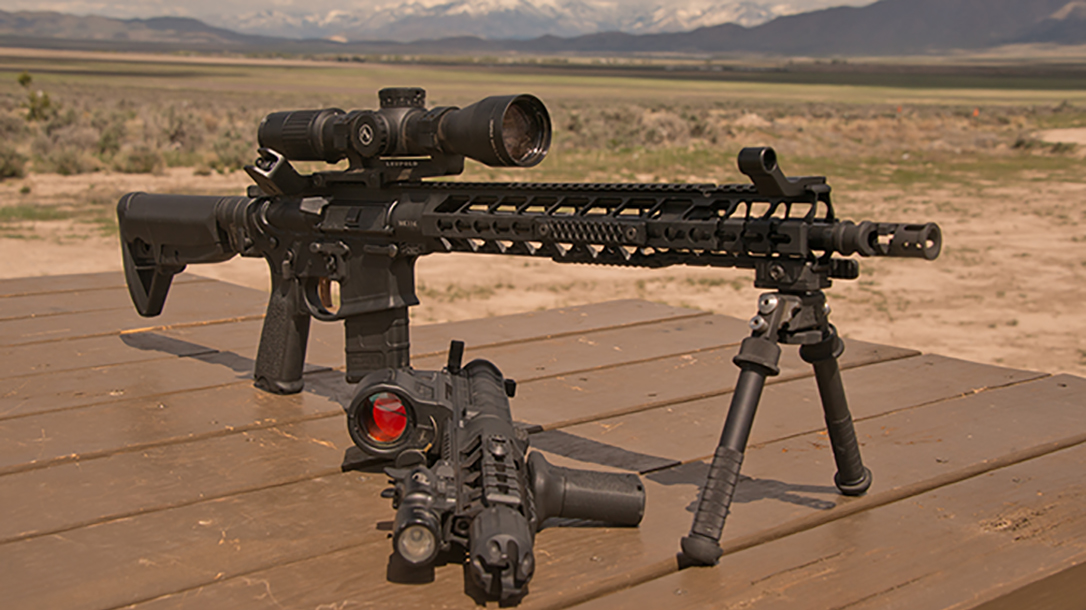 With the Maxim Defense stock installed, the MK107 fit in my Vertx pack, but it took a little finagling to manage it. If you want an even more compact setup, you could always install a Law Tactical Folding Stock Adapter.

To be honest, I’ve never been a huge fan of short-barreled ARs, mostly because they never seem to run well, and they are just plain loud and obnoxious to shoot. But this tame rifle has made me rethink SBRs in general, and I’ll definitely be keeping this one around as a truck/self-defense rifle. It’s incredibly handy working around my truck, it’s easy to carry and it’s about as good as it gets when it comes to clearing rooms. Primary Weapons Systems’ new MOD 2 upgrades have only made a strong, proven design even better. If you are in the market for a super-short AR, consider pairing the MK107 MOD 2 with a Maxim Defense CQB stock. I know I wasn’t disappointed.