Primary Weapons Systems, out of Boise, Idaho, has done it again. It released a rifle that could pretty much make a convert out of anyone who pulls its bang switch. The PWS MK116 Mod 2-M rifle seems to be generating an awful lot of buzz lately. PWS gained popularity quickly with its proprietary long-stroke gas piston system. It’s truly a genius idea of PWS co-owner and product designer Dean Sylvester. 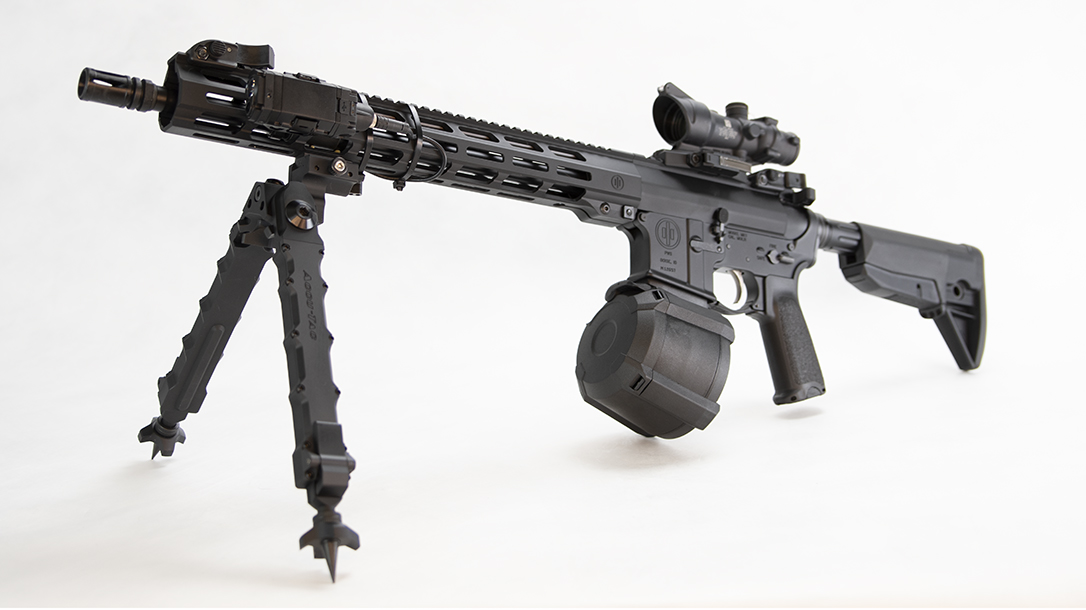 Most of you reading this have at one time heard about the insane reliability of the legendary AKM (AK-47), right? Even in the filthiest of conditions, it still runs. Well, it was designed for peasants to use, and most are made from a piece of sheet metal that is riveted together. If you remove the gas piston and bolt carrier from an AK and put it on a table next to the PWS MK116 Mod 2-M gas piston and bolt carrier group, you will see a strong resemblance. What Sylvester did was figure out a way to adapt the reliability of the AKM, and make it work in the AR.

The MK116 Mod 2-M comes with a T6 7075 forged aluminum upper and lower receiver and has a 15-inch handguard with PWS proprietary PicLok rails. If you’re not familiar with those, the PicLok rails can accommodate accessories that require a Picatinny rail, and it can also accommodate any M-LOK accessory as well.  That opens up the options for those that prefer one or the other.

The lightning cuts on the upper and lower receiver add in weight reduction, as well as adding to its attractive appearance. One will notice the ambidextrous controls, which are also very helpful for those who practice shooting from both shoulders.

This rifle comes factory with Bravo Company USA furniture (stock and grip), so PWS used a top-quality selection there as well. PWS also included their “Ratchet Lock” castle nut and QD socket endplate, which ensures that the castle nut doesn’t need to be staked.  The trigger is a “milspec” trigger, and PWS states that it’s a 5.5-6.5-pound pull.

The PWS MK 116 Mod 2-M is a beautiful beast of a rifle. Recently, I attended the 2020 Athlon Outdoors Rendezvous. There I got in some range time with the MK116 Mod 2-M. Being a mid-length gas system, and with its long-stroke gas piston, it sure seemed like a soft shooter to me. I know that the demo rifles that PWS brought out for range day got some serious use.

So after everyone else was pretty much done shooting, I stopped back by and shot the MK116 Mod 2-M again, and it shot the same as it did first thing in the morning, despite all of the hard use that day. We were shooting steel with ease, and even a little Tannerite as well. Nailing the steel targets at 200 & 300 yards with the supplied red dot was pretty simple, as the rifle itself was a solid shooter.

A rifle sure to be sub-MOA in the hands of a competent shooter. I was able to hit about 3/4-inch grouping at 100 yards with their more budget friendly PWS MK116 PRO during extensive testing last year. So, I don’t see why a similar or better grouping couldn’t be achieved here. Aesthetically, it’s a very attractive rifle. It’s almost going to be a shame how I’m going to treat it when I get my hands on one here shortly for a detailed review and thorough wringing out. Expect a more in-depth and detailed review coming soon for Tactical Life magazine. For more information, visit primaryweapons.com.