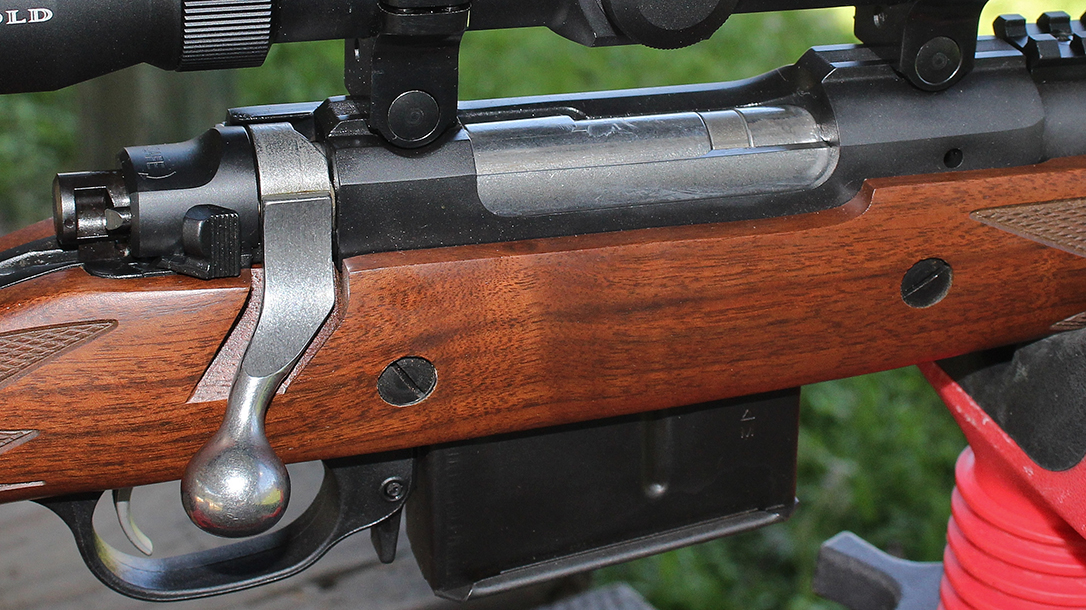 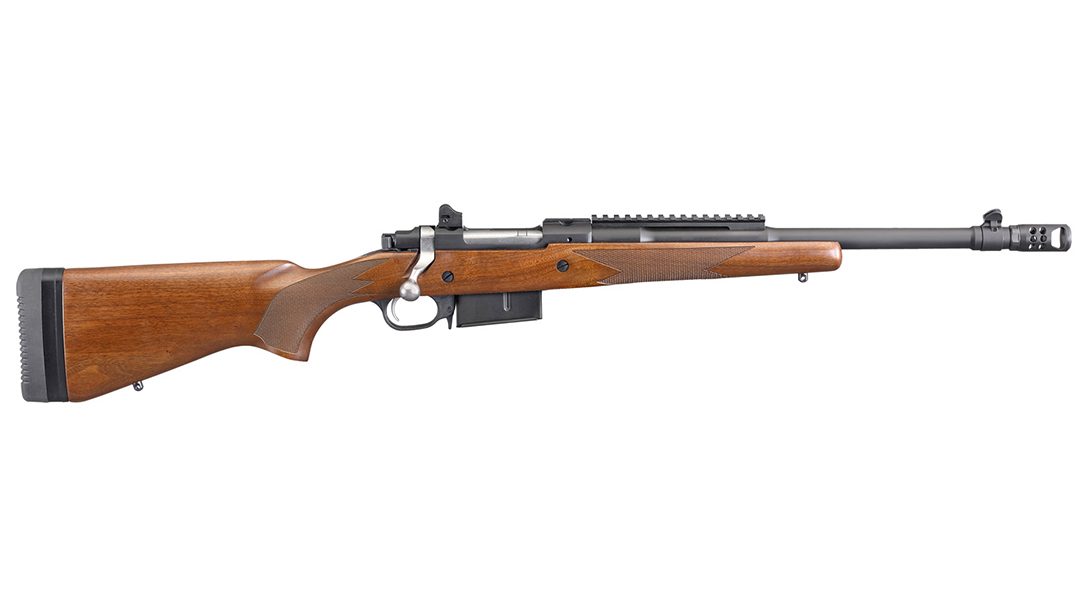 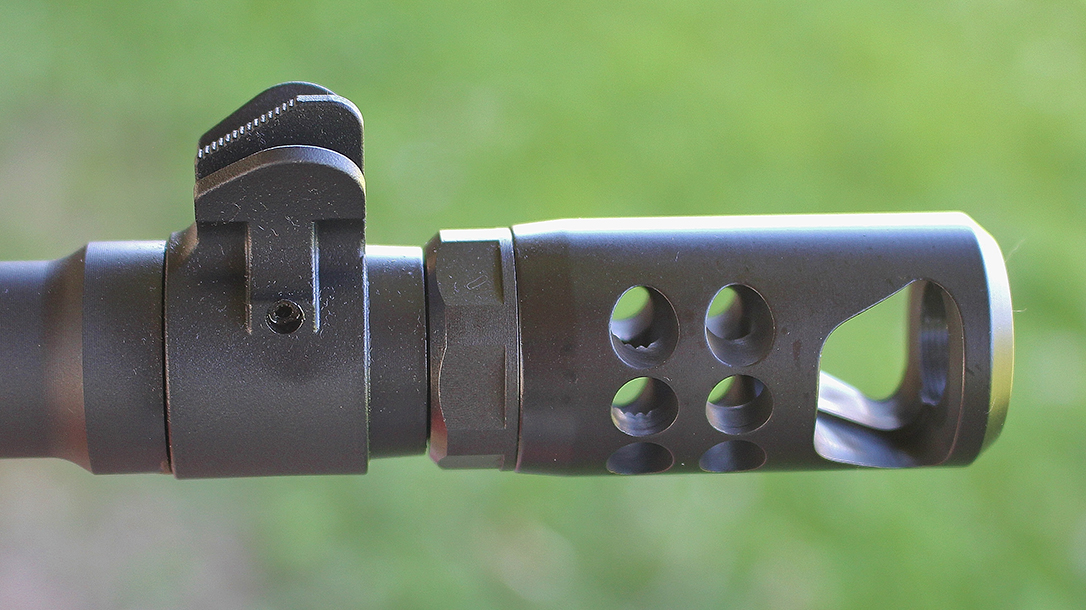 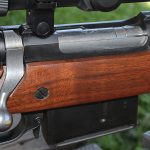 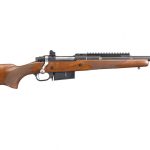 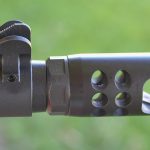 Stopping a feral hog with one shot can be a real challenge. Hogs are tough animals. Unless you hit their central nervous system, they can run a long distance before dropping. Worse yet, hogs live in dense undergrowth and swamps, where they can be next to impossible to retrieve. Deer also run and can be hard to recover, but in my experience, hogs are tougher to stop than deer and more difficult to find, even with good shot placement. Fortunately, Ruger’s new .450 Bushmaster Scout Rifle and new loads from Hornady and Remington are up to the task. 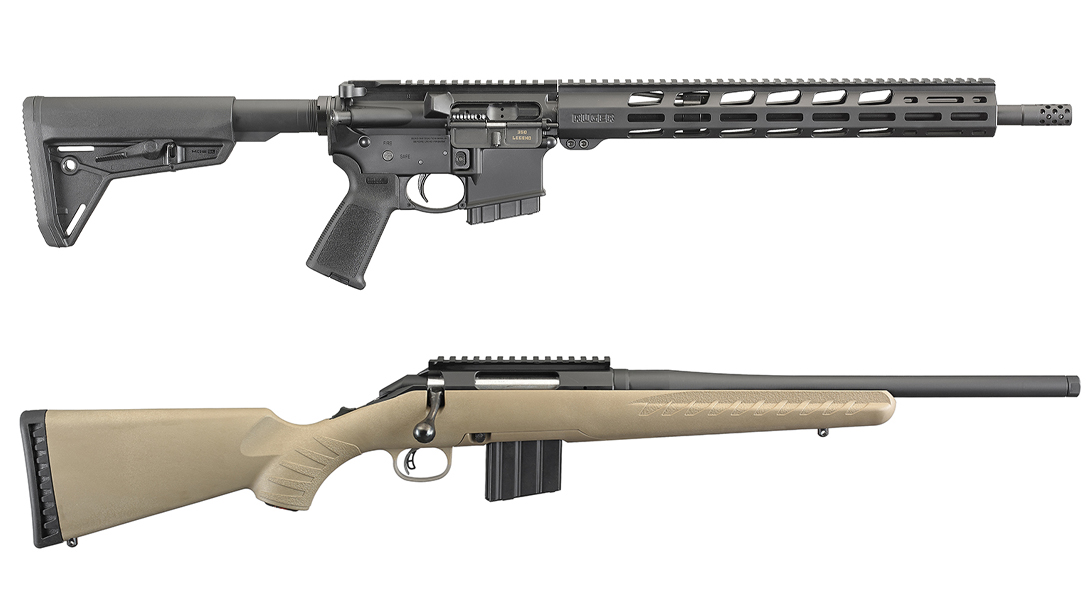 The .450 Bushmaster cartridge seems like it was designed for hogs. It was originally developed on Lieutenant Colonel Jeff Cooper’s concept of a “thumper” round that would cleanly take larger big-game animals when used in the AR-15 platform. The .450 Bushmaster started as the wildcat .45 Professional cartridge and was later developed into its current form by Hornady and Bushmaster. The .450 uses a shortened .284 Winchester case, and it headspaces on the case mouth. The bullet diameter is 0.452 inches rather than 0.458 because the power of the .450 round is such that it must use solidly built 0.452-inch bullets. In fact, Hornady and Remington designed their very stout 250- and 260-grain bullets specifically for this caliber.

The new Ruger Scout Rifle that I tested for this article launched Hornady’s 250-grain Black FTXs at an average velocity of 2,162 fps and delivered an average 2,594 foot-pounds of energy (fpe) at the muzzle. Remington’s 260-grain AccuTips left the barrel at 2,075 fps and delivered 2,485 fps. When using a Leupold scope set at 4X magnification, my groups averaged under 1.5 inches at 100 yards with both loads. I know I’m getting a bit ahead of myself, but given this kind of performance, the Ruger .450 will reliably take hogs, black bears and even elk out to at least 150 yards, and it would harvest deer out to 200 and 250 yards.

This level of performance puts the .450 Bushmaster very close to the .45-90 Winchester High Velocity load, which was well-respected for its stopping power in the Old West, and this rifle is a modern replacement for the .35 Remington woods carbine. Even so, hogs are dangerous, and I always carry a backup like a Ruger SR1911 Commander loaded with Hornady Critical Duty ammo or a Smith & Wesson Model 360 PD loaded with CorBon’s .357 Magnum DPX ammo.

The Ruger Scout Rifle is based on a concept developed by Jeff Cooper, the founder of Gunsite. It’s basically a short-barreled, heavily built bolt-action rifle with a military-style detachable magazine. Think of it as an all-purpose rifle that can be used for hunting as well as personal defense under survival conditions. Originally chambered in .308 Winchester, it can be as effective as the bolt-action rifles of WWI and WWII. But given the rifle’s 16-inch barrel, the .308 loses enough velocity and energy that it becomes a little less powerful than a .300 Savage when fired in the Scout. That’s fine for most deer, smaller hogs and small bears, but a heavier caliber is better for bigger game.

On the other hand, the Ruger Scout Rifle is not just for close shots on moderately dangerous game. The rifle employs features allowing configuration for both short- and medium-range shooting. In fact, versatility is the objective of any scout-style rifle. For example, the Ruger Scout Rifle has adjustable iron sights, Ruger rings for mounting a traditional scope and a Picatinny rail on top of the barrel that can mount either a long-eye-relief scope or a red-dot sight. Using a red dot or an illuminated-reticle scope further extends the tactical utility of the rifle by giving it low-light capabilities. You can even mount a low-profile light in front of a scope to identify targets in darkness. Overall, the Ruger does a good job of handling the lion’s share of tasks that the average shooter would require of a general-purpose rifle.

The Ruger Scout Rifle proved a very rugged, high-quality firearm. No one wants a flimsy survival rifle, and the Ruger is clearly up to the job. The heart of the rifle is Ruger’s ultra-strong Hawkeye controlled-feed action. It mates to a sturdy hammer-forged, free-floating barrel that has a protected non-glare front sight and a very effective Ruger Hybrid muzzle brake. The barreled action is set in a straight-grained walnut stock that has two reinforcing bolts like a well-built big-bore express rifle. At the end of the stock is a soft rubber recoil pad, and the rifle comes with several replaceable spacers of different thicknesses so the length of pull can be fitted to almost any shooter. Lastly, the detachable, steel, four-shot magazine is very rugged and has a strong spring to ensure reliable feeding.

In addition, my test rifle’s fit, finish and functioning were all very good. There were no tool marks or other signs of sloppy manufacturing, the wood-to-metal fit was very good, all parts were well formed, the rifle’s lines were straight, and the trigger broke very crisply at 4 pounds. The bolt and magazine were a little tight, but this is a rifle intended for moderately dangerous animals, and you don’t want the magazine to drop out on recoil or to have a poor-fitting bolt bind on a follow-up shot. Altogether, this is a rifle that’s well-suited for its intended uses.

Hog-hunting distances here in Florida are relatively short. However, I prefer to do most of my hunting nowadays with an optic, and I chose two to test for this article. The first was a Leupold 1.25-4x20mm VX-R Patrol scope with a FireDot reticle. This scope’s fully multi-coated lenses and large 30mm tube provide excellent light transmission, and the FireDot allows exacting bullet placement in the heavily shaded Florida brush. In areas that are more open, I’d have chosen Leupold’s 3-9x40mm VX-R Patrol, but the Florida undergrowth is so dense that I’ve never shot a hog at more than 50 yards.

The second optic was an EOTech EXPS2 holograph sight. This sight has a 1-MOA dot surrounded by a 65-MOA circle and has proven its ability to deliver accurate shots out to 100 yards. The beauty of this design is that the circle works well for quick targeting at close range while the dot offers greater precision. You can also shoot with both eyes open, which is a boon for hog hunting.

One thing I like about living here in Central Florida is that there are a number of places where I can field-test equipment by hunting hogs. West Shore Outfitters has a hunting camp nearby, so I booked a couple of late-afternoon hunts to test the Hornady and Remington loads on game. On the first hunt, the feeder went off at 6 p.m., and I set the Leupold scope to 3X. This gave me a view of the feeder and access trails. Then I turned on the scope’s FireDot reticle and settled in. It wasn’t long before three little pigs (no kidding!) came to feast. I watched them play for about half an hour. Suddenly, they alerted on something to my right and took off like they’d seen the devil.

A sow was about 30 yards away, circling slowly through the trees and brush toward the feeder. She had an open wound at the base of her neck and seemed quite irritable. No wonder the little pigs fled. She stopped behind a bush just long enough for me to place the FireDot a few inches behind her left shoulder and shoot. The shot broke, and the Hornady FTX bullet sent the sow straight down. She didn’t even twitch. It was one of the cleanest kills I’d ever seen on a big-game animal. 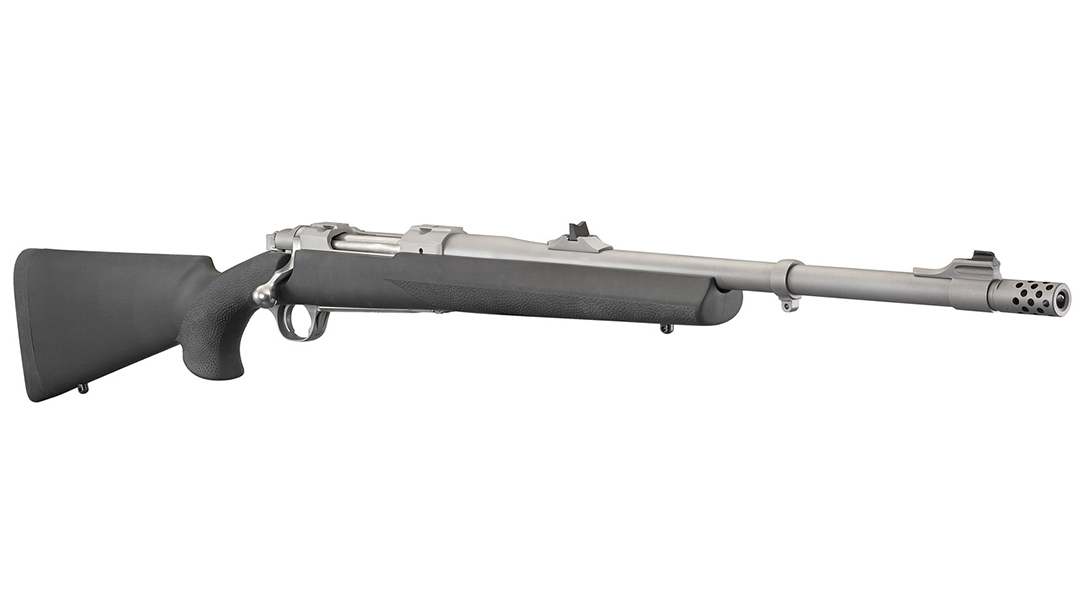 On the second hunt, I used the Remington AccuTips at about the same distance on a slightly bigger sow. The bullet hit in exactly the same place as on the first pig. The second sow ran about 30 yards and fell in a heap. With each pig skinned, the wound channel showed why they went down so fast. The bullets went through and through, leaving large exit wounds that were about 1.5 square inches wide. Most of the lungs of both animals were completely destroyed. Clearly, both the 250-grain FTX and 260-grain AccuTip bullets expanded and penetrated exactly as they were built to, with the FTX expanding more quickly and leaving a bigger entrance wound than the bonded AccuTip.

It’s hard to judge a rifle based on two hunts. However, I have to say that the Ruger Scout Rifle in .450 Bushmaster, loaded with either Hornady Black or Remington AccuTip ammo, had a more dramatic effect on hogs than any other rifle and cartridge I’ve used before, including those in .338 Federal and .458 SOCOM. In the end, Jeff Cooper’s “thumper” just may turn out to be a real “sleeper” as people gain more experience with this very interesting caliber, its ammunition and the rifles chambered for it.

This article is from the October-November 2018 issue of Tactical Life magazine. Grab your copy at OutdoorGroupStore.com. For digital editions, visit Amazon. 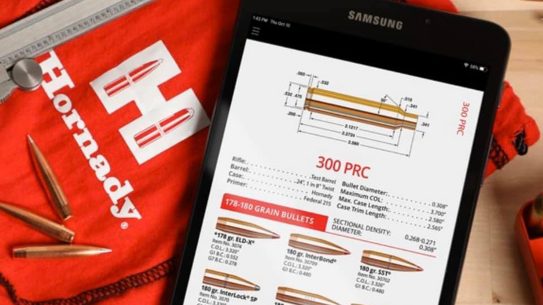