"As with other Kalashnikov-based weapons, the RPK-74 has developed a reputation for excellent reliability."

When I was in Russia a little over 12 years ago, I had quite a few contacts with former Desantniks (paratroopers) and Spetsnaz operators and made it a point to ask them about the weapons they had used and their opinions of them. Since most had seen combat in Afghanistan or Chechnya, their views of weapons were often very practical. One of the weapons that I discussed with these veterans was the RPK-74, which basically functioned as a squad automatic weapon.

Just as the 7.62x39mm RPK (Ruchnoy Pulemyot Kalashnikova) had been based on the AKM rifle, the 5.45x39mm RPK-74 was based on the AK-74 rifle. The primary differences between the RPK and the AKM were a heavier and longer barrel that wouldn’t heat up as quickly during full-auto fire; longer-range sights; a threaded barrel to take various muzzle devices; and a sturdier trunnion and receiver cover. The wooden forend and clubfoot buttstock provided for more effective prone use. RPKs were also fitted with bipods. These same features were incorporated into the RPK-74, which, as its designation indicates, was adopted in 1974 and produced by Izhmash. Another change was the reinforced magazine well, and the RPK-74 uses a different guide rod and spring than the AK-74.

Although the RPK accepted 75-round drum magazines, the RPK-74 did not. Well, let me modify that by saying that polymer, 100-round drum magazines were developed, but they weren’t not normally issued because of reliability problems. Instead, 45-round box magazines were issued. This is the extended magazine often seen in photos of ex-Russian paratroopers most often commented on this type of magazine. They liked the fact that the RPK-74 was light enough that it could be carried and fired during an assault, but for defending a position, they wished that it had a quick-detach barrel and a drum or belt-feed system.

Of course, this is the typical tradeoff with a light machine gun, which must be very portable but still have more sustained fire and range than a standard rifle. Note that because the RPK-74 lacks a quick-change barrel, the gunner must limit his fire to less than 100 rounds per minute to prevent overheating and damaging the barrel. This limits the RPK-74’s effective fire to about two 45-round magazines per minute, though in heavy combat a gunner could put as many rounds downrange as fast as possible.

Another soldier I spoke with did not like the fact that the bipod wasn’t adjustable; he felt there were times he would have liked to use lower cover in Chechnya since the high silhouette of RPK-74 gunners often made them targets. Of course, Russian weapons tend to be designed for practicality and to be soldier-proof. The taller bipod is necessary because of the long, 45-round magazine.

The typical RPK-74 gunner carries quite a bit of firepower since standard-issue equipment with the weapon is eight magazines and six stripper clips that hold 15 rounds each (thus allowing two fast reloads of a magazine), a speed-loader guide, a cleaning rod, a cleaning kit, an oil bottle, a sling and magazine pouches. Assuming each magazine is fully loaded with 45 rounds, and with the six stripper clips loaded, an RPK-74 gunner has 450 rounds available to him. And since the RPK-74 can use standard AK-74 magazines, operators can sustain fire with magazines from other members of the squad. If I remember correctly, airborne squads and motorized infantry squads typically have one RPK-74 per squad. Additionally, a squad also has a PKM gunner to give more range and volume of fire.

For airborne and other special operations uses, the RPKS-74 is available with a wooden folding stock. This stock actually adds a few ounces of weight to the RPKS-74 over the standard RPK-74. Versions with side-mounted rails for optics or the NXP-3, NSPU or NSPUM night-vision optics are designated differently. To be more specific, the RPK-74N1 features the NSPU 1PN34 sight, the RPK-74N2 uses the NSPUM 1PN58 sight and the RPK-74N3 is fitted with the NSPU-3 1PN51 sight. The night-vision equipment does add quite a bit of weight. For example, the RPK-74N1 with the NSPU sight weighs just under 17 pounds. I’m not sure if that weight is with or without a loaded magazine. The RPK-74M version is identifiable by its black polymer stock and magazines.

There is also an export version chambered for the 5.56x45mm NATO designated as the RPK-201. It is meant to be a companion weapon to the AK-101 assault rifle, which is also chambered in 5.56mm NATO for export. I don’t know of any countries that have adopted either weapon.

Russian tactical doctrine for the RPK-74 seems to be that it should be carried by the gunner during an advance in support of his comrades by adding to the volume of fire to overwhelm an enemy position. In a defensive role, the RPK-74 functions as an area-fire weapon. The heavier PKM in 7.62x54R is the primary squad defensive machine gun, but the portability of the RPK-74 allows it to be quickly moved to another position to counter heavy enemy fire.

As with other Kalashnikov-based wea-pons, the RPK-74 has developed a reputation for excellent reliability. However, the lack of a gas regulator can cause functioning problems if the weapon is extremely dirty, especially in very cold conditions. 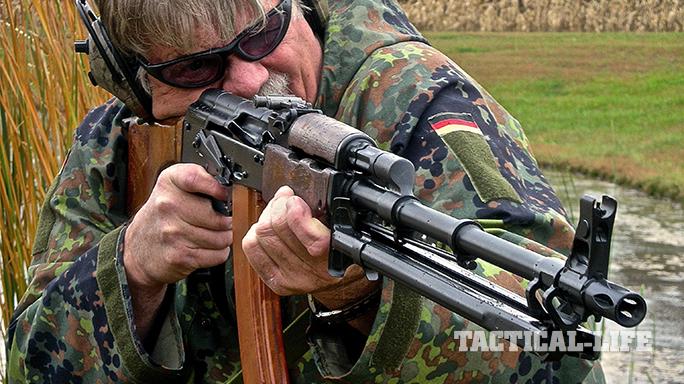 The RPK-74’s effective range is usually given as 300 meters against a point target on full-auto and 400 meters on semi-auto. The maximum range is normally given as 1,000 meters on a point target with the maximum lethal range being 1,500 meters. When initially zeroing the RPK-74 the same type of front sight tool used on other AK-type rifles is needed. However, one benefit that helps the RPK-74 shoot out to longer distances than the AK-74 is a knob on the rear sight that allows shooters to quickly adjust for windage.

I have talked with former Russian paratroopers who feel the RPK-74 is more accurate than the AK-74. I have also noticed that I can shoot more accurately at longer range with an RPK-74 on semi-auto than with an AK-74 on semi-auto. Of course, the fact that I was generally shooting the RPK-74 prone may have helped. I have also seen speculation that the longer RPK-74 barrel more thoroughly burns the gases of the 5.45x39mm round, which improves accuracy. I also have found that the U-notch on the RPK-74’s rear sight helps me shoot it more accurately.

I have found the RPK-74 to be relatively accurate when fired in bursts. I set up multiple targets at 50 and 100 yards and tried engaging them from prone, firing short bursts at each one. As long as the targets were positioned relatively close to each other, it is fairly easy to score multiple hits with each burst. I have actually fired a standard RPK in 7.62x39mm more than the RPK-74 overseas, with longer bursts on targets at 50 and 100 meters. It was easy to keep the bursts on the targets, though there was some vertical stringing in the hits as the bursts progressed. Firing bursts with the RPK-74 does not entail as much noticeable recoil or muzzle rise.

I’ve also tested the portability of the RPK-74 by firing a few rounds, then picking it up, moving to a new position and firing some more, then repeating the process again. The RPK-74 is much more portable than I am, but young Russian paratroopers or infantrymen with better knees than mine should have no problem using it readily in an advance. I’ve also tried firing the RPK-74 off-hand and found it surprisingly handy and well-balanced. I could normally hold it well enough to place shots on a plate at 50 yards.

The Russians have kept the RPK-74 in their arsenal now for over 40 years, so they must see tactical value in it. Since it can be fired during an advance, it is a weapon that encourages aggressiveness. It is also handy enough to be used by airborne or airmobile troops as well as motorized and naval infantrymen. Aesthetically, I like the look of the RPK-74. Its distinctive stock and 45-round magazine make it an interesting-looking weapon. It does still have the disadvantage of limited sustained fire. The equivalent U.S. weapon is the M249 SAW, which is belt-fed and has a quick-change barrel. At 22 pounds loaded, the M249 remains relatively portable, but not as portable as the RPK-74. Admittedly, each Russian squad also has a PKM, which is belt-fed and fires the more powerful 7.62x54R. Still, the RPK-74 seems to fit Russian infantry tactics and remains a viable frontline weapon.

Some former Soviet republics, such as Georgia, Belarus and Ukraine, continue to use the RPK-74, as do some Third World countries. It is also popular with various guerrilla and jihadist movements where its portability and increased firepower make it very useful in ambushes and other hit-and-run-style attacks.