by Robert Jordan
in Guns, Rifles
0

I am never bashful about my love of the pistol-caliber carbine platform. They are easy to aim, shoot fast and are simply all-around joys to run. The SAR USA 109T showed up in the pistol configuration without an arm brace. 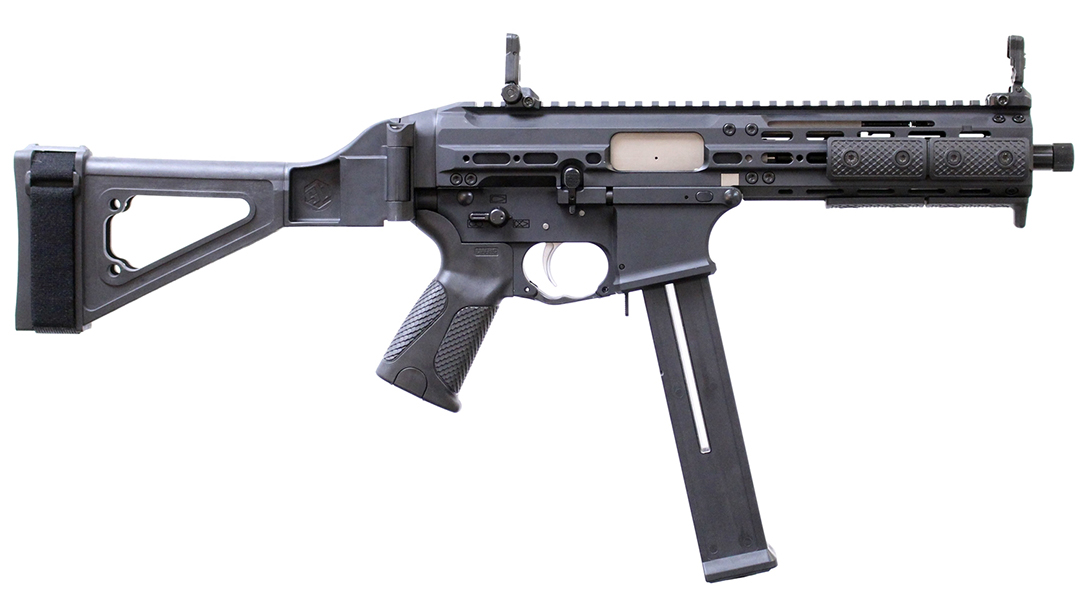 My first thought was, “I will just throw a SKB Arm brace on it by swapping out the buffer tube.”

Then, I noticed that the castle nut, which holds the buffer tube on, had been staked, and staked well. Sure I could still take it off, but it would have required a few minutes with a punch and then the castle nut would have certainly ended up with a few scratches, so I decided to forego the arm brace. I would run the gun as a true pistol, sans the brace. However, to make it easier to aim, I needed to make a few simple modifications.

So without an arm brace, what is the best way to “aim” a really big pistol? This is one of those times when a visible laser really shines. I decided to remove the pistol grip and install Crimson Trace’s LiNQ system for both a white light and a visible green laser.

Crimson Trace has been around since 1994 and really became known for making replacement grips that have a built-in adjustable laser that can be turned on and off by squeezing a button with the dominant hand holding the gun. It was revolutionary back then and it is still a great idea today.

I have Crimson Trace grips on a number of my smaller carry pistols. Because they’re easier to use than the iron sights and they provide an intimidation factor when confronting a bad guy. If the bad guy sees a red dot on his chest, he knows where that first bullet is going.

Crimson Trace today makes everything from lasers to lights to red-dot sights. The LiNQ system replaces the standard AR pistol grip with their grip. You then mount the light/laser module wherever you want on the fore-end of the gun. Squeezing the button on the pistol grip sends a signal to the module to turn on the light, the laser or both, depending on how you program it. What if your battery is dead on your pistol grip? No worries, the module still has a button on the back, and you can press it to turn it on and off.

The SAR USA 109T looks like your standard Colt SMG from the 1980s, with a few upgrades. First, it takes the 9mm, double-stack, Uzi-style magazines. It operates on a straight blowback system so there is no rotary bolt like a normal AR. Instead, what is normally called the bolt-carrier group is, in fact, all just one very large, very heavy bolt.

The non-free-floated firing pin (it has a spring to prevent slam fires) can be removed, but that is as far as you disassemble the bolt for cleaning. The extractor, unlike an AR-15 in 5.56mm, cannot be removed easily. It requires you to knock out a roll pin in the bolt. Consequently, removing the extractor is not part of normal maintenance and cleaning.

The trigger on the 109T is standard mil-spec and as such, it can easily be upgraded to countless aftermarket triggers. The barrel is 8.6 inches long, not counting the birdcage-style flash suppressor. So, it cannot have a stock put on it without purchasing the ATF’s $200 Short Barrel Rifle tax stamp.

The free-floated forend is 6.75 inches long with Picatinny rails on all four sides, and the top rail matches up to the Picatinny on top of the upper receiver so longer optics can be mounted. The SAR USA 109T includes Magpul folding backup iron sights (BUIS). The gun comes in a nice hard plastic case with foam cutout. Three colt-style 32-round magazines are included, along with the standard trigger lock, an adjustable two-point bungee sling and a cleaning kit in a canvas pouch.

The buffer tube end plate has two wings, with holes for attaching slings with any number of different easy-release clips. The included sling snapped right on to the two attachment points. A sling is important on any gun you cannot fit into a holster because it keeps it attached to your body when you have to use your hands to open a door, handcuff a bad guy, or simply move furniture out of the way as you are clearing a room.

On a pistol like this, the bungee sling serves a very important second purpose. If properly tightened, the shooter pushes the firearm straight out and the sling acts as a stabilizer to hold the gun still without the use of a stock against the shooter’s shoulder.

Finally, I unscrewed the flash suppressor and direct threaded my Gemtech Trinity 9mm suppressor for running some subsonic ammo. Using the red-dot and pushing out against the sling made aiming manageable, and it was easier to aim in low-light conditions using the green laser.

In a midday Arizona sun, the laser was hard to pick up unless standing close to the target. But with a little cloud cover, it worked great. It was plenty bright for using it inside of a house.

When I began testing the 109T, I brought out my usual array of practice and self-defense rounds to give the gun a wide variety of different types of ammunition. As a rule, the gun did not like any type of hollow points. I spoke with Mike Mullens, the main gunsmith for SAR USA. He explained that Turkish police carry this 9mm subgun in semi-automatic/full-auto mode and have for many years. However, they only carry NATO-approved 124-grain full metal jacket ammo. Nothing else. The gun is tweaked to run this round flawlessly.

I found that it ran pretty much all FMJ, including 147-grain projectiles, and even Ammo Inc’s super heavy 165-grain stelTH subsonic rounds. End users need to be aware that if they try to run hollow points, the gun may not run as well as they would like.

The SAR USA 109T is a proven design that has been used by law enforcement the world over for more than 30 years. It is simple and effective. With modern lights, sights and accoutrements, the platform is even more effective than before. With tools like a well-fitted sling, a red-dot sight or a visible laser, these guns are very effective tools.

Whether you are looking for a gun for self-defense, for competition or simply the most fun gun you can find in the AR platform, the SAR USA 109T might just fit the bill. For more information, visit SARUSA.com.