I first laid eyes on a Seekins Precision SP10 rifle almost three years ago. It was on display during the company’s grand opening in 2014. After talking to company founder Glen Seekins, I examined the rifle closely. The design seemed perfect for a precision AR in .308 Winchester/7.62mm NATO. The barrel was mounted deeper in the receiver, meaning the handguard is attached to the receiver, not a barrel nut. This promotes enhanced accuracy.

Testing the first production SP10 some months later proved these notions to be true. To this day, the SP10 remains one of the most accurate ARs chambered in .308 Winchester that I’ve ever used. After testing it again recently, I found that it still clusters Hornady 168-grain A-MAX rounds into 0.5 inches or less with boring regularity. This kind of precision brought me to a popular long-range caliber, the 6.5 Creedmoor. 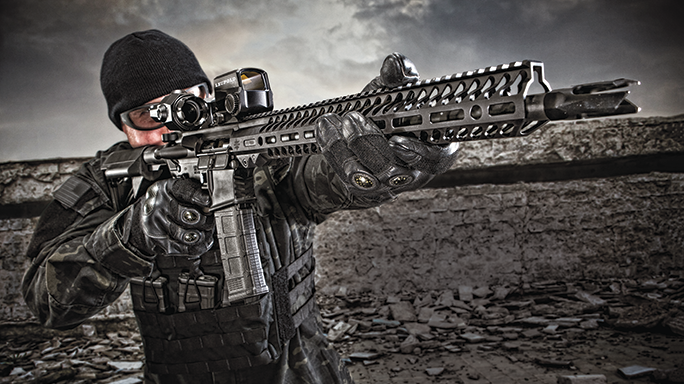 When I talked to Glen Seekins some time ago, he told me that the company intended to release a factory 6.5 Creedmoor version of the SP10, but only after the .308 Winchester model had proven itself in the market. While gaining popularity in bolt actions, the 6.5 Creedmoor was only starting to see use in precision semi-automatics at the time.

I anxiously waited for the factory rifle to arrive. I was near certain it would be excellent. But Seekins Precision is known for taking the time to get things right before releasing a product, and the new SP10 in 6.5 Creedmoor did not disappoint.

The 6.5 Creedmoor SP10 starts with upper and lower receivers that are CNC-machined from a billet of 7075-T6 aluminum. The flattop upper is Seekins’ iRMT-3, so it is super-strong yet lightweight. It features a 22-inch, match-grade, stainless steel barrel with a 1-in-8-inch twist rate. The barrel is fluted to reduce weight and help dissipate barrel heat, and the muzzle features 5/8z24-tpi threading for suppressors. The barrel comes capped with Seekins’ ATC muzzle brake.

The rifle uses an adjustable gas block, which makes it easy to tune the rifle for your ammunition, a suppressor or the conditions you’re operating in. Surrounding the barrel and gas system is Seekins’ 15-inch, free-floating SP3R handguard, which features a flat bottom that makes it easy to support the rifle on barricades, bags and other supports. Along with the full-length top rail, the handguard’s sides and bottom are lined with KeyMod slots for accessories. The upper also sports a BCM charging handle with an extended latch.

The lower receiver includes ambidextrous magazine and bolt releases. Redesigned for the .308 cartridge, the bolt release has a unique paddle on the right side that is slim and easy to operate. The ambidextrous safety selector has a 60-degree throw and looks nice while operating crisply. The safety’s levers are nicely machined.

A precision CMC trigger is also in-stalled, providing a reliable and crisp single-stage trigger. Totally self-contained with nothing to come loose, these triggers are built for tough duty applications. An Ergo grip provides excellent control and comfort. Finally, Magpul’s excellent PRS stock is installed on the rifle-length buffer tube. All told, the rifle weighs 10.5 pounds unloaded. It’s a tack driver that can still maneuver well.

For testing, I mounted a Steiner 5-25x56mm M5Xi scope in a U.S. Optics UMQDS mount with 20 MOA of built-in elevation. This scope uses 0.10-mil adjustments for both wind and elevation, and the adjustment knobs feature easy-to-read numbers. Made in Germany, the scope is built to very tight tolerances. Its one-piece tube measures 34mm, providing plenty of usable elevation. The crystal-clear glass provides an excellent sight picture, even in falling- and low-light conditions. The scope also uses Horus’ H59 reticle, which is illuminated via a single CR2450 battery.

Seekins Precision uses Rock Creek barrels, which are some of the most accurate on the market today. This 22-inch barrel was no exception, as the SP10 created some impressive groups at 100 yards, especially with Prime Ammunition’s 130-grain Match+ load. Prime uses top-quality brass and projectiles as well as temperature-stable powder. The company told me to expect handload-grade accuracy and consistency, and this test delivered on that promise.

The Prime load produced the tightest fight-shot group at 100 yards, measuring 0.55 inches, but the SP10 also performed well with the Hornady and Nosler loads, with the widest group measuring just 0.7 inches. At 300 yards, the Prime ammunition shined again, producing a 0.8-inch group on a rather windy day. My widest 300-yard group that day was just over 1.25 inches. While some of my bolt-action rifles will perform better, this is impressive performance for a semi-auto.

Next, I ran the SP10 through a number of shooting positions while tagging steel out to 400 yards. Despite its weight, the rifle was very handy on barricades and other obstacles. This is where the flat-bottomed handguard really pays off; I could hold the rifle steady on railroad ties, the shooting bench and even a chair. It was even handier with an Atlas bipod installed. I could set the handguard on a barricade, then reach over and grab the bipod for a truly steady position.

Rotating the rifle in position never seemed to adversely affect its operation in any meaningful way. It just spit out brass with every trigger press. The uniquely shaped lower allows you to really drive the magazine well into fences or other obstacles with authority. And I’ve always been a fan of the Magpul PRS stock. It may be a tad heavy for some competitors, but if you rely heavily on prone shooting, it is pretty hard to beat.

Pushing out to 700, 850 and 1,200 yards, the SP10 performed well. Out to 850 yards, it still liked the 130-grain loads, whether it was the Prime load or my handloaded Berger AR hybrids. Getting hits on a 16-inch target at 1,200 yards was just a tad easier with the Hornady 140-grain A-MAX ammo. Wind can be tricky on my range, especially in the winter, but the SP10 was very consistent. I would not hesitate to take this rifle to a local match, and I probably will in the future. At 850 yards and in, the SP10 was as accurate as many bolt-action rifles.

My primary focus is typically tactical, so muzzle brakes are not generally something I use. Unless it’s a magnum and unsuppressed, my preference is a flash suppressor or just a bare muzzle. As muzzle brakes go, however, the ATC is a good one. It tames recoil and muzzle rise, and keeps most of the blast away from the shooter or a partner. The resulting dust signature was minimal.

I wanted to test the rifle with a few suppressors, so I mounted the Delta P Design Brevis II Ultra, SilencerCo Omega and Gemtech “The One” suppressors, and they all worked very well. I had to adjust the gas block for each one, but that’s why the SP10 has one in the first place. If you intend to keep it suppressed, you will need to tune the rifle to work properly with your suppressor. Very little adjustment was needed with my chosen suppressors.

The Brevis II Ultra is in its own league because it weighs 7.3 ounces and is only 5.5 inches long. It amazes me each time I use it since it looks like it should not work. It’s plenty quiet with a moderate push. All of the suppressors were ear safe while shooting outdoors. Both the SilencerCo and Gemtech can be set up as thread-on suppressors, and they worked the best that way. The shot-to-shot consistency when removed and reattached was better using direct threads. They can also be set up for use with a flash suppressor, which is my preference for duty applications. 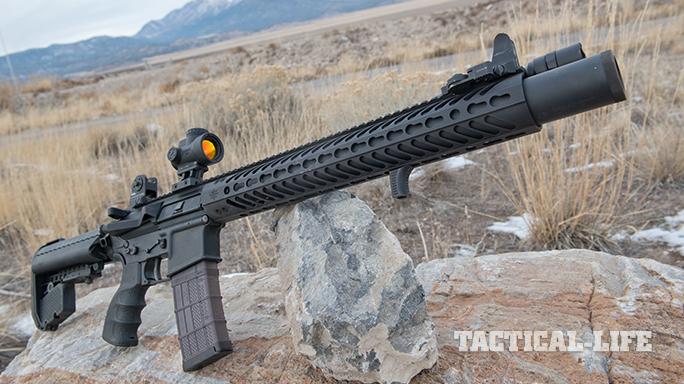 I was able to complete five true cold-bore shots using the Seekins ATC muzzle brake and the Omega suppressor. Setting up the same target each time, the widest groups I created were between 0.75 inches and an inch centered on the target. Once again, that’s pretty impressive for a semi-auto.

It was nice to be able to pull this rifle out of the box and start shooting using the ATC muzzle brake. No tuning was necessary—just load, press and enjoy. Seekins Precision really did its homework for this rifle, as it worked well with all of the factory ammunition I used and my somewhat hotter handloads. It uses a standard rifle buffer and one of David Tubb’s flat springs—nothing exotic—meaning it should stay just as reliable for a long time.

I have run my SP10 in .308 Winchester incredibly hard over the past year. It’s seen snow, mud and high round counts. I’ve run it with several types of ammunition at significant ranges, and it has maintained superb accuracy. I have little doubt that this SP10 in 6.5 Creedmoor will perform just as well, and it costs much less than several similar custom rifles. If you are looking for a solid performer built to custom standards, the Seekins Precision SP10 in 6.5 Creedmoor should be at the top of your list.