The SCAR rifle has been a popular cornerstone in the FN product line for years. The Special Operations Forces Combat Assault Rifle (SCAR) was developed in 2004 to meet the need for an elite, modular battle rifle. Since its initial launch, it has seen only slight changes or expansions. That has all recently changed, however, as FN has taken the SCAR to the next level. Engineers have now designed the updated FN SCAR to run without a reciprocating charging handle. This design will appeal to all the users who love their SCAR but had challenges with the reciprocating charging handle. 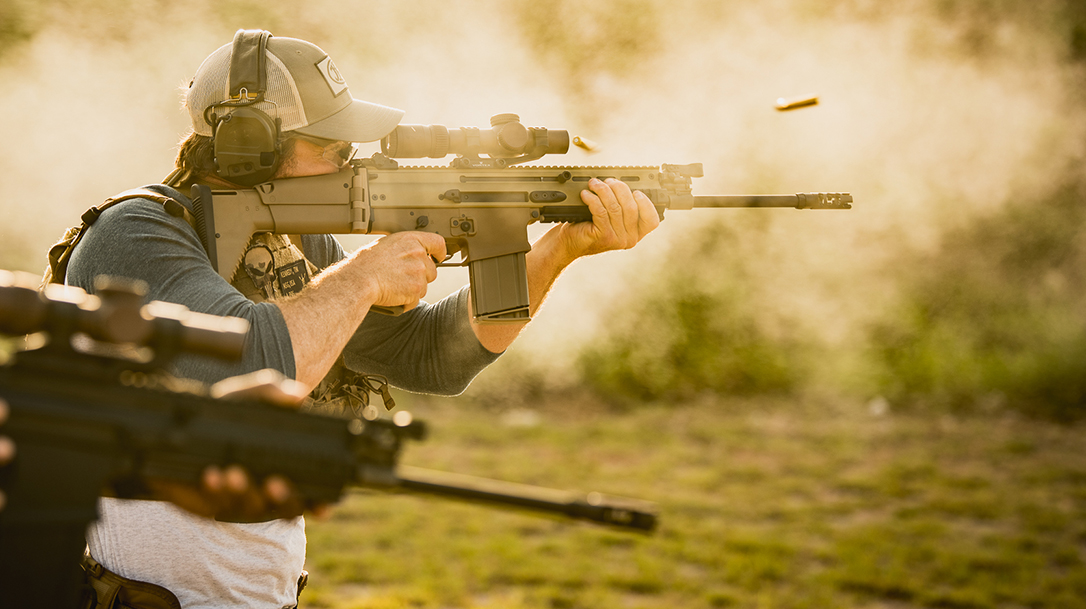 The new, ambidextrous non-reciprocating charging handle assembly enables any shooting position, grip style or optic choice. The new NRCH clears all optics and allows for easy shooting against barriers or in rollover prone. Beyond a function enhancement, the gun’s moving parts are now lighter. The reduced reciprocating mass is an 8.3-percent reduction on the SCAR light and 15.3-percent on the heavy. This makes for a fast-shooting, accurate rifle.

I was fortunate to spend some time with FN and the new SCAR at an event in Texas recently. I have run my fair share of SCARs in different flavors, but the non-reciprocating charging handle made a huge difference. Once I would be cautious about approaching a barricade, but those days are gone. While it may be hard to believe, you can feel the reduction in the BCG weight. The gun is smooth shooting and fast to run.

It also made shooting in rollover prone much easier. I did not have to worry about incidental contact with the ground and fouling the rifle. In fact, I laid the gun directly on the ground to test it, and it did not even flinch. Once I returned home, FN saw fit to send me three versions of SCAR for a little extra test driving. I ran the 16S, the 17S and the 20S based on the FN SCAR Mk 20 Sniper Support Rifle. All three provided some very enjoyable shooting.

For those who already have a SCAR, FN will be producing retrofit kits allowing shooters to modify their guns. It is a simple operation and install will only take about 15-20 minutes. This is a great enhancement on an already great gun. From a sergeant on overwatch in Kabul to an instructor running a course in defensive rifle tactics, the FN SCAR has proven itself with decades of hard use. With limitless applications, the short-stroke gas piston system in light and heavy platforms delivers precision fire with extreme reliability, precision, low recoil, and fast-handling character uncommon with .30 caliber rifles.

As always, FN is looking not only to the future, but also at existing products and how to improve them. If you have been on the fence about getting a SCAR because of the reciprocating charging handle, you now have no reason not to get one! For even more info, please visit fnamerica.com.