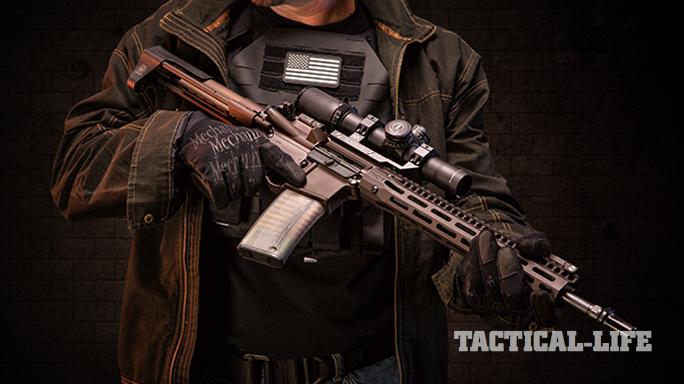 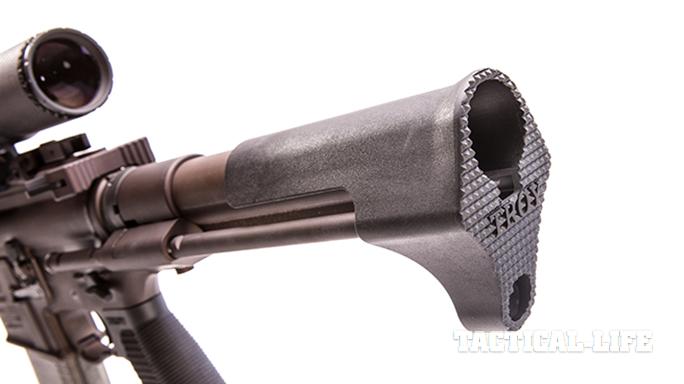 2 of 10
Photo by Straight 8
Troy SOCC
Troy’s sleek new Airborne stock is designed so it can quickly be adjusted to four different length-of-pull positions while still being very snag-free. 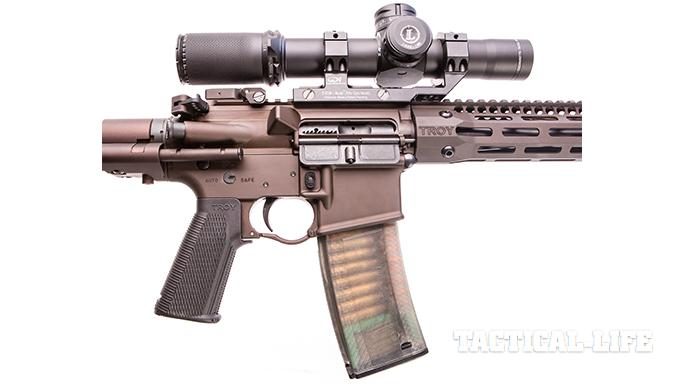 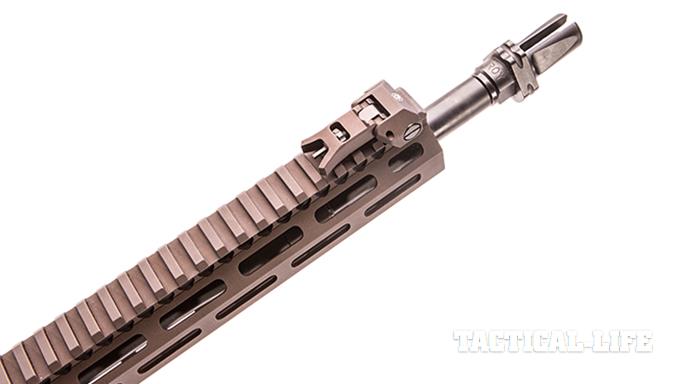 4 of 10
Photo by Straight 8
Troy SOCC
To overcome NFA hassles, the barrel features a pinned and welded flash suppressor/adapter. 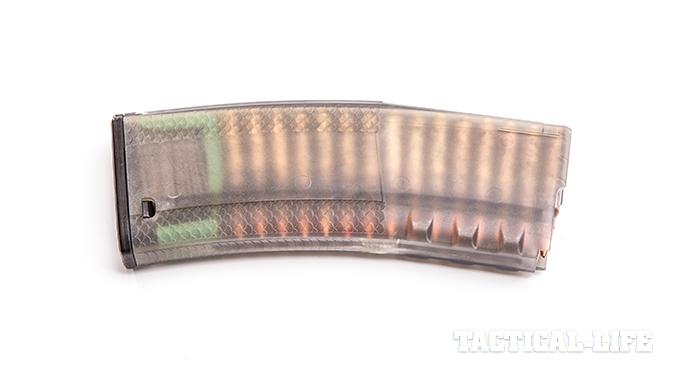 5 of 10
Photo by Straight 8
Troy SOCC
Troy’s BattleMags are translucent so you can see how much ammo you have left on tap. 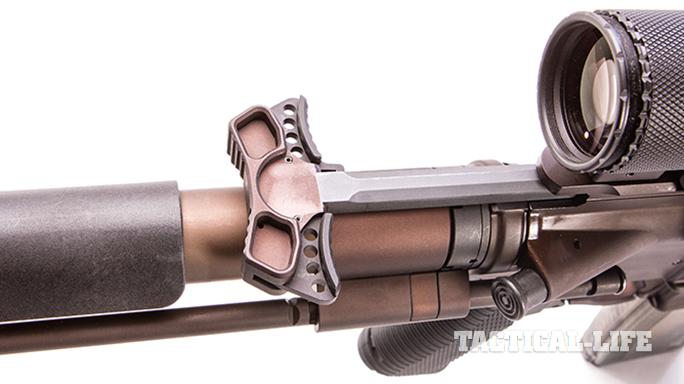 6 of 10
Photo by Straight 8
Troy SOCC
The SOCC charging handle is ambidextrous and made of hardened steel so it won’t fail in a tricky situation. 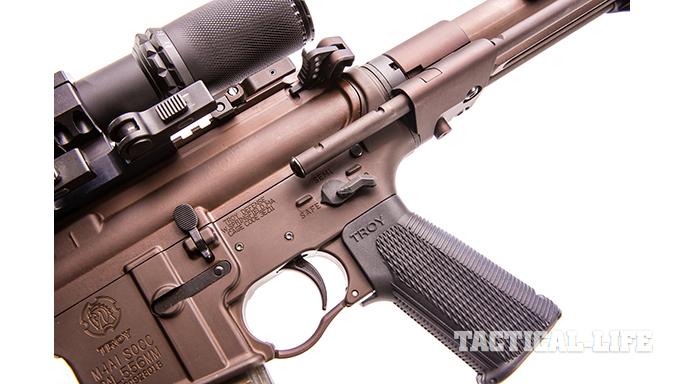 7 of 10
Photo by Straight 8
Troy SOCC
The Airborne stock works in conjunction with Troy’s BattleAx Control Grip, which is heavily textured and angled for better CQB handling. 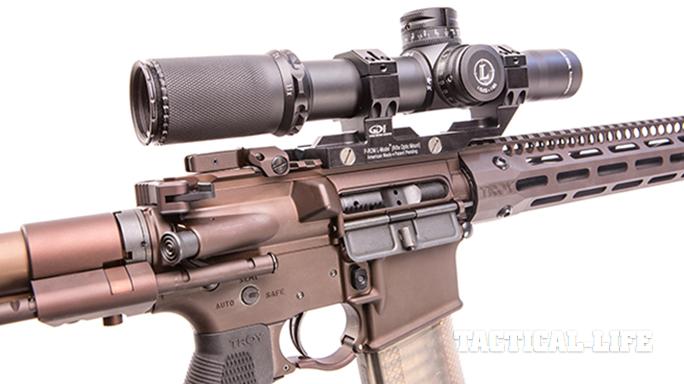 8 of 10
Photo by Straight 8
Troy SOCC
The top Picatinny rail provides plenty of space for sights and optics, and Troy includes a set of its newest folding BattleSights. 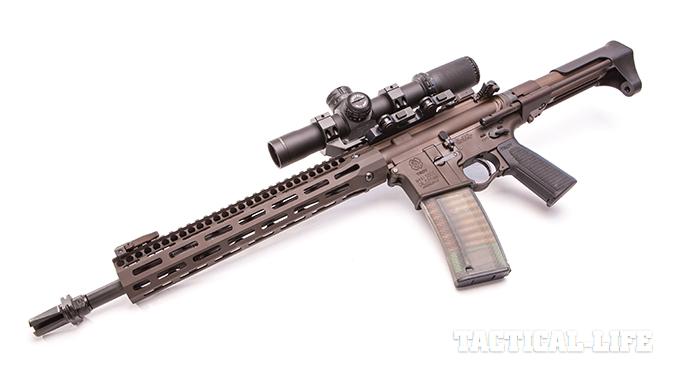 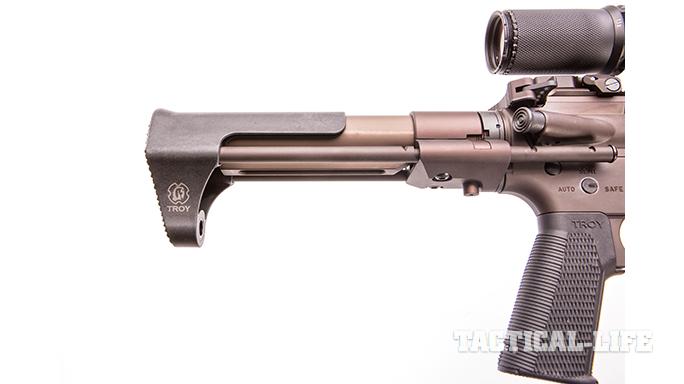 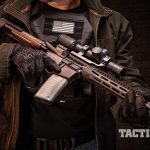 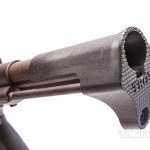 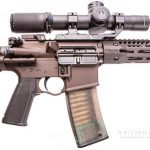 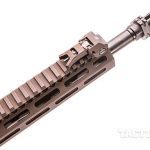 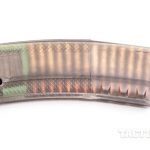 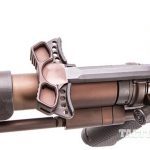 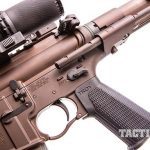 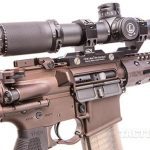 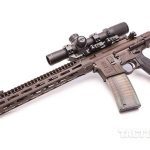 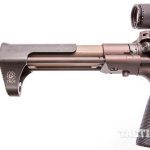 Six men scramble across a dusty courtyard on a moonless night. Six more stay stationed at various points around the structure. They are covered in equipment yet make barely a sound as they move. Crickets continue to chirp as the men now line up behind one another next to a doorway. While it shows signs of wear with chips and faded paint, it has been recently modified with a serious lock. The man in front softly checks the door knob to see if it turns. No such luck tonight.

They tighten their stack now as whisper-quiet communications flow into their headsets: “Delta Six on target. How copy?” The reply—“Delta Six, you are clear”—comes quickly. At that point, a man near the rear of the stack says, “I have control, standby.” Moments pass before he gives the signal. A breacher turns the door to splinters. The team flows in, and hell follows with it.

Raids like this have been a staple of the special operations community since its inception. The only things that have really changed are the location and the gear these brave soldiers carry. Some of the best advances have been in the weapons used by special operations soldiers. While some companies will react to requests for submissions, one company stands above the rest by working to build the ultimate weapon for those who work on the “dark side.” That company is Troy Industries, and the weapon is the Special Operations Compatible Carbine (SOCC).

My discussions with Troy were a quick reminder of why I enjoy working with the company. My test sample wasn’t a safe queen, nor was it designed “just for photos.” The closing word I received on the gun prior to its arrival was “Shoot it like you stole it.” In a nutshell, Troy isn’t shy about people testing its guns. The official word on the Troy SOCC models is that they are “designed to be lightweight and ultra-low profile.” They were “developed specifically for today’s warfighters and led by special operations field requirements.” The guns are a mix of form and function with an eye for real-world applications.

The Troy SOCC carbine comes standard with Troy’s new Airborne stock. This stock is designed to add much needed reinforcement and strength to a standard M4 buffer tube at its weakest point. It is equipped with multiple QD attachment points and is shorter than a typical stock when collapsed. It also offers a greater length of pull of up to14 inches when extended.

The SOCC Airborne stock is a four-position design that can be quickly extended without using hand contortions to reach buttons or switches. It is small, lightweight and allows you to fight with the stock completely collapsed if need be. This is very appealing to me because it makes the gun easy to use in close quarters. Troy has been known as an innovator in stocks, and its Tomahawk stock, for example, continues to lead the industry.

One challenge we faced using these stocks, though, was in accessing the safety selector in a quick and easy way. It is no surprise, however, that Troy has already addressed this challenge and created the SOCC Ambidextrous Safety Selector, with the rear of the levers angled down 45 degrees, which makes it easy to index while using the SOCC stock. The safety is made of tool steel and manufactured with stainless steel detent plungers to lock the levers in place in lieu of screws that can loosen or strip with extended use. I found it very easy to access and run. In fact, it would be a great selector for any gun regardless of the stock.

While serious shooters will be running optics on their guns, they will also be running iron sights as well. Backup sights are critical, and Troy has gone out of its way to make some great sights. Called SOCC BattleSights, these units are low profile. In fact, they’re 45-percent lower than Troy’s previous models. Machined from hardened aircraft-grade aluminum that is then hardcoat anodized, these sights provide a continuous zero and are positioned at the right height.

The next item that caught my eye was the handguard on the gun. This is in fact a point of pride with Troy, which is offering forends like this as standalone products for those wanting to upgrade their rifles. These are the newest rails from Troy, and they feel great. They are narrow and sleek without sacrificing any strength. They come with an M-LOK slots and include cooling holes along the top. No, these are not just for looks. Anyone who has spent serious time with a carbine will appreciate the heat-venting design of these holes. The handguard is machined from hardened aircraft-grade aluminum with stainless steel components before being hardcoat anodized. It is lightweight, smooth, and would be a perfect fit for CQB operations.

Topping off this sexy beast is the SOCC charging handle, which is an ambidextrous design made of hardened steel. This is important for anyone who has a gun that will see heavy use. I have broken my fair share of charging handles and believe firmly that this Troy charging handle would not fall into that terrible category.

The last point I will share is the trigger Troy has included on this gun. It is a Geissele G2S unit, and it’s a perfect fit. For all intents and purposes, the G2S is designed to be an improved/enhanced combat trigger. It is a 4.5-pound, non-adjustable combat trigger that allows precise and accurate trigger control. This makes it as reliable as it is smooth. In other words, it’s quite an upgrade.

Well, that’s enough of the technical details. You didn’t come here for a mechanical engineering review. Like myself, you want to know if the Troy SOCC shoots as well as it looks. And yes, yes it does. While I have a standard testing procedure for rifles, I suspected that things would get a little more interesting when I broke out this rifle. On the bench, the gun ran very well and delivered sub-MOA groups. Shooting from a supported position with a sand sock at the rear, my best group came in at just over 0.5 inches.

A point worth mentioning here is in regard to the barrel. It is listed as a 14.5-inch barrel, which would not clear the NFA hurdle for general civilian ownership. But what Troy has done to overcome this is pinned and welded a three-prong flash suppressor/silencer adapter, making the barrel a hair over 16 inches long and thus free of the dreaded NFA paperwork. In fact, Troy did a spectacular job on the pinning and welding. It’s very difficult to see and should be a lesson to some companies out there.

After the bench work was done, I took the Troy SOCC for a drive. I literally ran the rifle from inside my vehicle. This is where the Airborne stock really shines. It was easy to wield and bring to bear on the targets. The rifle also made it easy to get in and out of vehicles. It made me want an even shorter version.

At the end of the day, the gun ran like a champ. My contact at Troy even included a couple of the company’s new translucent BattleMags. These mags have a translucent body that allows you to see your ammo count and type in even the harshest environments. They are designed to run in pretty much any AR-style gun and are optimized for NATO’s M855A1 rounds. It is my belief that these mags were “liberated” from the closet of the engineering department. Regardless of where they came from, they worked very well.

To sum up the Troy SOCC in one word, I simply say, “Winner!” This gun has all the trademarks that have helped Troy become an industry leader. It is also a look inside the Troy corporate culture that is serious about making guns and gear for our nation’s warfighters. This gun is designed and built by the best of the best to serve the best of the best. The name given to this weapon is very fitting. 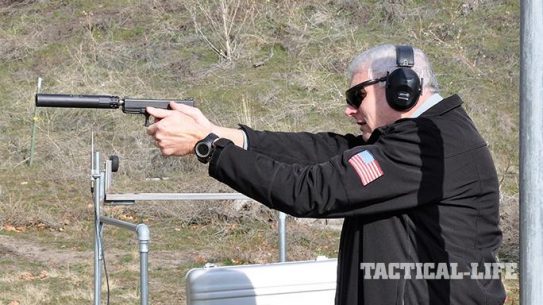 The American Suppressor Association has developed an advocacy form that makes contacting your legislator...