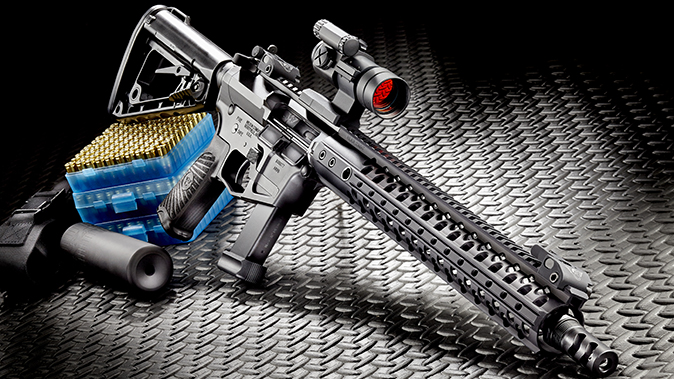 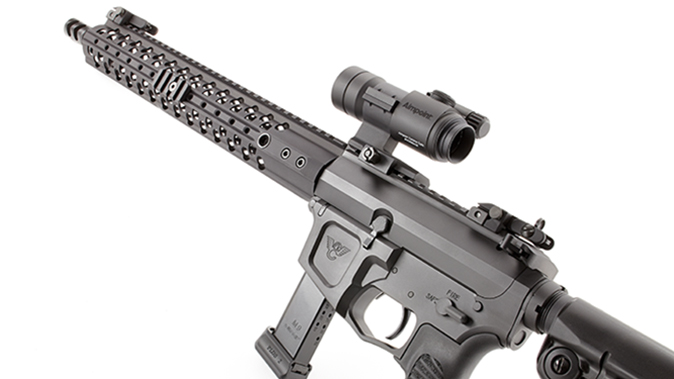 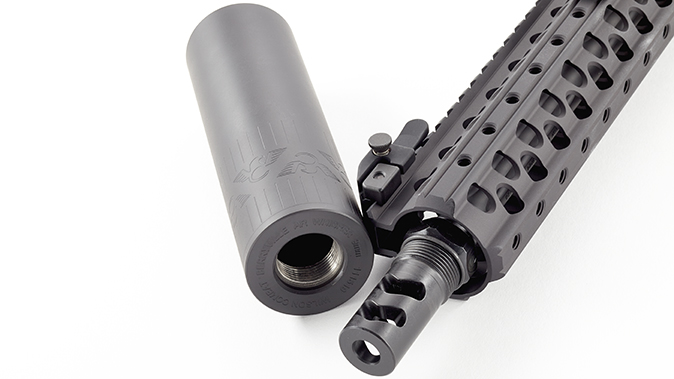 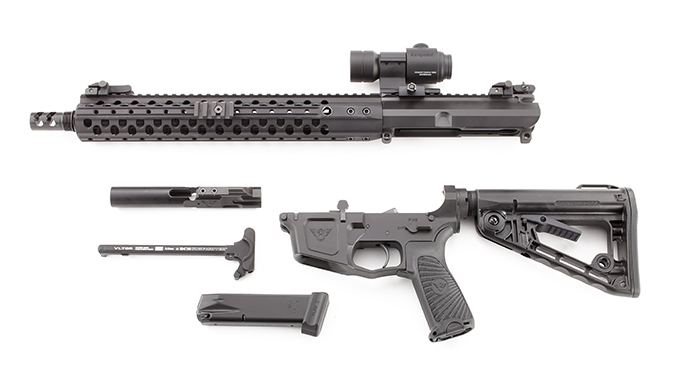 4 of 10
Wilson Combat AR9B
The AR9B has all of the Wilson hallmarks, but it’s built from the ground up to accept 9mm Beretta 92/M9 magazines and operates via blowback. One MEC-GAR “Plus 2” magazine was included for testing. 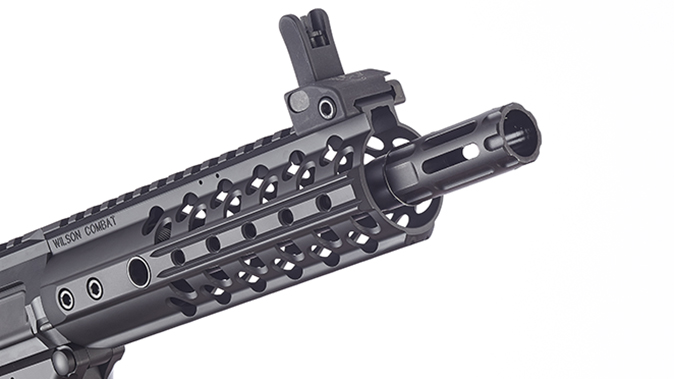 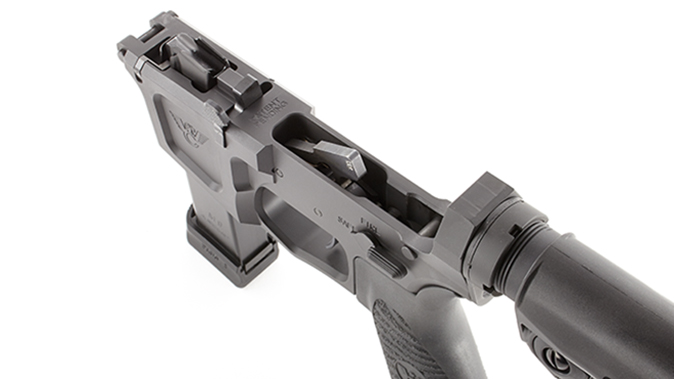 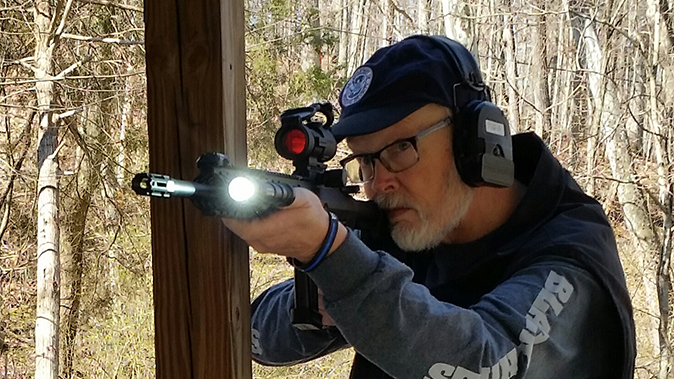 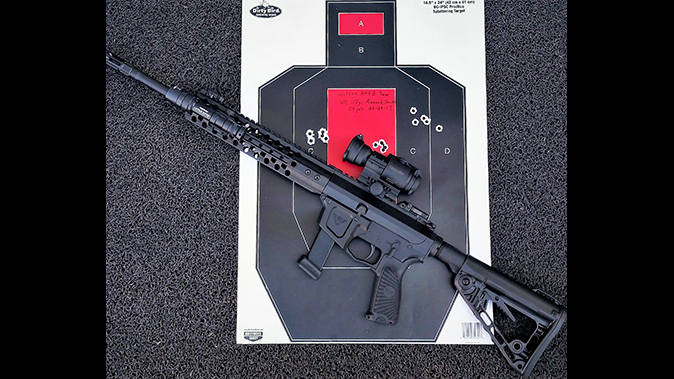 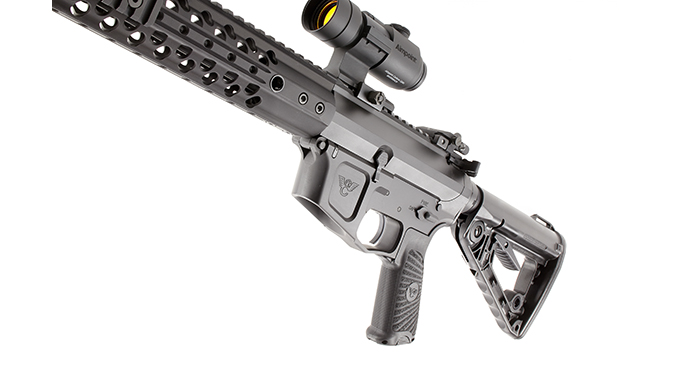 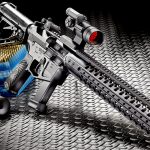 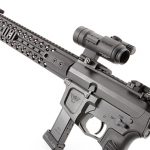 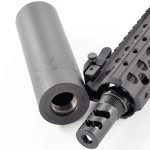 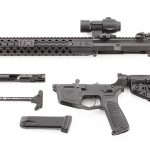 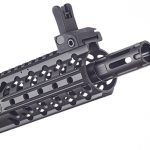 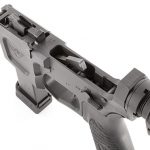 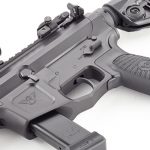 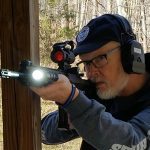 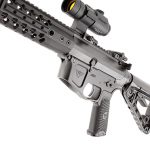 Some 35 years ago, Colt decided to enter the submachine gun market that was dominated by Heckler & Koch, Uzi, Beretta and other mostly European arms-makers at the time. The company took the familiar AR platform and modified it to shoot 9mm cartridges. It basically operated via blowback, firing from a closed bolt for better accuracy. Law enforcement and military units already using the AR took to it, and a civilian-legal, semi-auto version was produced as sales increased.

ARs in 9mm were cheaper to shoot, safer in urban environments and potent enough for self-defense and some hunting applications with the proper ammunition and shot placement. Since that time, the pistol-caliber carbine (PCC) has become a mainstay of gun manufacturers that produce AR rifles. There’s even a new PCC division in USPSA competition. With all of that in mind, let’s take a closer look at one of the best PCCs currently available.

Bill Wilson began building custom AR rifles in 1999, and the AR9 series is his company’s first PCC. It’s unique in the AR world because it was built from the ground up as a 9mm carbine, offers match-grade accuracy and utilizes magazines for commonly encountered service pistols from Beretta and Glock.

Wilson doesn’t just slap AR parts together here, either. The manufacturer machines the barrels in-house from match-grade domestic blanks. For example, my test AR9 came with an unfluted 16-inch barrel with a 1-in-10-inch twist rate. The receivers are CNC-machined from a billet of 7075-T6 aluminum to exacting tolerances, and parts like gas blocks, muzzle devices and scope mounts are also made in-house. Anything not made in the Wilson shop is sourced from the best mil-spec contractors. Extensively trained finishers put everything together. This makes the Wilson Combat AR9 a standard that sets the bar for other AR-type PCCs.

The carbine I was sent for testing was an Wilson Combat AR9B —the “B” designation means it takes Beretta 92FS/M9 magazines. (As you probably guessed, the AR9G is built for Glock magazines.) And it’s important to note that the lower receiver is not modified from a standard AR to take the smaller-diameter magazine. Instead, it’s designed expressly for the 9mm magazine. The mag well forms an enormous funnel, and the magazine catch is oversized and easy to reach, as is the bolt release.

As for the trigger, my Lyman digital trigger pull gauge showed the pull weight on my test carbine averaged 3.1 pounds, and there was minimal take-up and overtravel. The surrounding triggerguard offers lots of room for gloved hands. The BCM Starburst grip fit my hand well, and it features an internal storage compartment.

The upper has a top rail for sights, and while the AR9B has a traditional charging handle, there’s no forward assist. As for furniture, the gun comes with an adjustable Wilson/Rogers Super-Stoc and an aluminum Wilson Combat TRIM handguard. This forend features a full-length rail on top, and the sides and bottom are drilled and tapped for additional rails. A 1.75-inch rail came bolted onto the left side of my test AR9B. The muzzle is threaded and fitted with one of the company’s Q-Comp flash suppressors. Finally, the AR9B has an expertly applied matte black Armor-Tuff finish.

No sights are included, but Wilson knows that shooters have their own targeting preferences. To that end, I felt a red-dot sight was appropriate, so I mounted an Aimpoint PRO (Patrol Rifle Optic). The PRO is out-of-the-box ready, economically priced, easy to use and will operate for up to three years on one battery. The 2-MOA red dot is adjustable for brightness and is compatible with night-vision devices and a 3X magnifier. It has front and rear flip lens covers and comes with a QRP2 mount. The rugged aluminum alloy housing is hardcoat anodized and waterproof to 150 feet.

For backup iron sights, I went with Magpul MBUS Pro front and rear sights, which are produced from steel with a corrosion-resistant finish. They offer maximum functionality and minimum bulk; both sights together weigh less than 3 ounces. They attach to standard accessory rails with claw mounts and flip down when not in use for protection and unobtrusiveness. They co-witnessed perfectly with the Aimpoint PRO.

The Wilson Combat AR9B came with a MEC-GAR M9 “Plus 2” magazine with a 20-round capacity, and I supplemented this with two more of the same kind I had on hand along with two standard 18-round MEC-GAR M9 magazines. If Wilson Combat supplies them with its AR9Bs, then you know they’re top shelf, and I’ve used them for a number of years with my personal Beretta M9 pistol.

At the range, my first task was zeroing the Wilson Combat AR9B at 50 yards with the Aimpoint PRO and Magpul backup sights, then setting up my chronograph to see what kind of velocities I’d get from the 9mm ammo in the carbine’s 16.13-inch barrel. I used a bench and a sandbag rest for support during this portion of the evaluation. 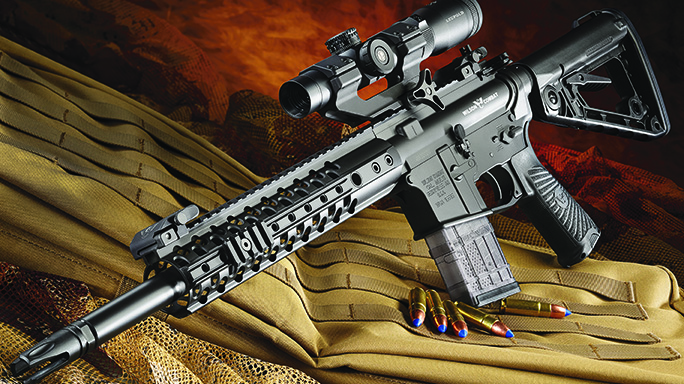 After getting the results you can find in the accompanying table, it was time to punch some paper and see what kind of accuracy potential the Wilson Combat AR9B possessed in my hands. I set up a target stand at 50 yards and used some large silhouette-type targets, but even they didn’t seem very large half a football field away. I had the red dot on one of the finer settings so I could still see what I was aiming at and shot three 5-shot groups with each of the test loads. It seemed in every case I had a not-so-tight group, a tight group and one in between. The best five-shot cluster measured 0.61 inches using the Wilson Combat 115-grain TAC-HPs. The best group average—just 1.16 inches—came with the Hornady Critical Duty cartridges.

For some practical shooting, I loaded up three of the 20-round MEC-GAR magazines with the subsonic Wilson rounds. I didn’t have a specific exercise in mind, either—I just wanted to shoot from 3 to 100 yards in several positions, with a couple of magazine changes along the way. I put up a full-sized silhouette target and stepped back 3 yards.

In every drill, I began with the AR9B in a low-ready position and then raised it to shooting level while disengaging the safety. I’d increased the illumination of the red dot, and when it came on the aiming point, I fired. I used mostly fired double-taps and sometimes a single shot to the head. I dropped back to 7 yards, fired, moved to 15 yards, fired again, and changed magazines. Then at 25 yards, I fired more rounds from standing then assumed a kneeling position to engage again. At 50 yards, I used a barricade—in this case a post for the range roof—and reloaded under cover. At 100 yards I used a couple of trees for cover and a rest.

I ended up shooting lower than I wanted to on the headshots. The vast majority of the center-mass hits were in the 10 and X rings. There were a couple of strays out in the 7 ring and a few more in the 8 ring, but all 60 rounds made it on paper. Back at 50 and 100 yards I’d turned down the red dot and used the Magpul iron sights, co-witnessing through the optic without a problem. The PRO was easy to see and use, allowing me to get on target quickly.

The Wilson Combat AR9B performed flawlessly, with zero malfunctions during my day-long range session. The wind was gusty that day, but it had no effect on my accuracy. The magazines were easy to load and dropped free when the well-designed magazine catch was pressed. In the end, I have to say that I would not feel under-gunned using this pistol-caliber carbine for defensive purposes. 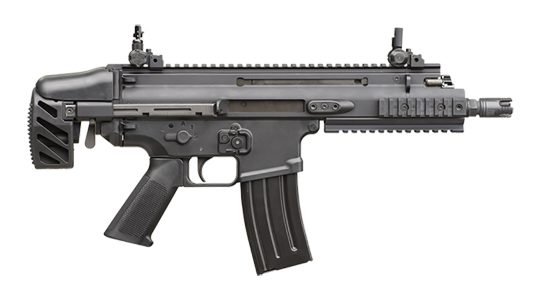