"...the AR9G sets itself apart from the middle- and down-market offerings by delivering far better quality of manufacture and engineering."

Pistol-caliber carbines have become extremely popular in the past few years, with many new models based on the AR-15.  However, the number of choices dwindles rapidly once you get to the apex of quality, with only two companies holding the top slots: Wilson Combat and JP Enterprises. 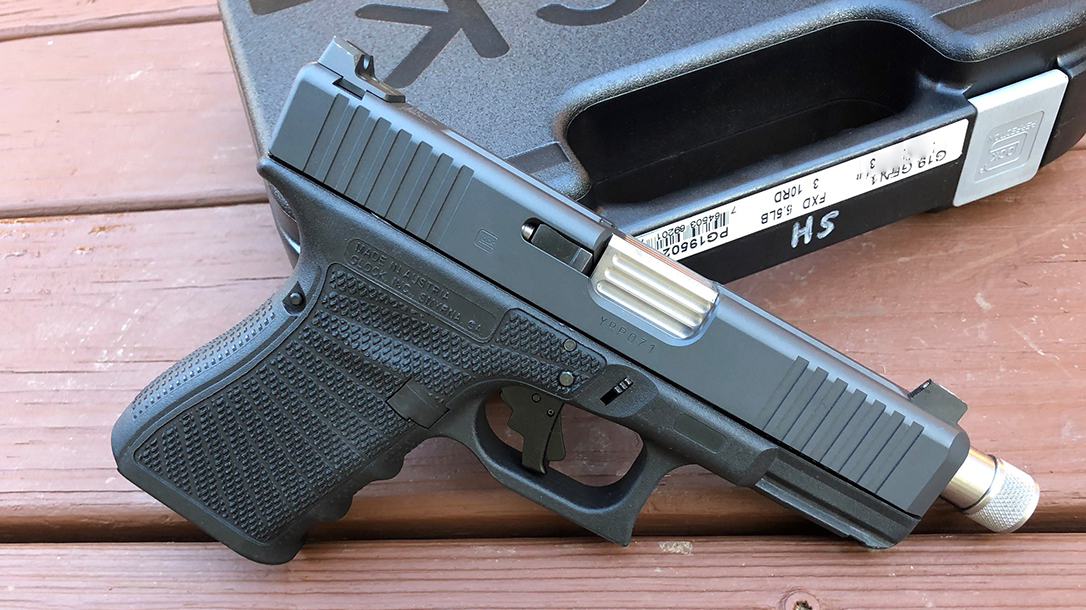 The Results of Getting a Customized Wilson Combat Glock 19 Gen4

The Wilson AR9G is a 9mm carbine designed for competitions and home defense. Some readers may scoff, thinking that the 9mm has insufficient ballistics for defensive use; as my chronograph proved, loading the AR9G with the proper ammo, such as Black Hills’ 124-grain +P JHPs, generated velocity figures (1,449 fps) that exceeded the street-proven .357 Magnum from a 6-inch-barreled revolver. Moreover, a 9mm carbine may be more suitable for family members who can’t train on a harder-recoiling 12-gauge shotgun, and many loads for 5.56mm NATO rifles present far greater over-penetration risks than the 9mm.

The AR9G is one of two 9mm carbines made by Wilson. The “G” stands for the fact that it accepts Glock magazines, while the “B” model uses Beretta 92 magazines. My sample rifle was one of the very first AR9Gs made. But the design has undergone some changes to improve its functioning. This includes a different two-stage trigger; a heavier bolt carrier and bolt carrier spring; and a magazine well modification to prevent the bolt from locking back prematurely if the shooter presses upward on the magazine while firing. These enhancements underscore Bill Wilson’s commitment to perfecting and improving a design rather than maintaining the status quo.

The AR9G has a 16-inch barrel and weighs in at 6.25 pounds. This makes it lighter than many 9mm ARs, including those from CMMG; Colt; Rock River Arms; Troy; and Palmetto State Armory. The AR9G also uses a dedicated lower receiver made to fit Glock magazines without the need for any bolt-in adapters or spacers. This offers an obvious advantage of allowing you to use the same magazine as the one in your pistol.

Making an AR-type rifle that uses pistol magazines and reliably holds the bolt open after the last round is fired is a challenge because the design requires additional parts to connect the activation lip on the front of the magazine follower to the bolt catch at the rear of the magazine well. (Several of the early attempts from JP Enterprises and Olympic Arms did not even offer this feature.) Maintaining total reliability can also be a challenge when using plastic-body Glock magazines, compared to steel-bodied magazines for the Beretta 92, for example.

The rifle’s fit and finish highlight its quality. The attention to detail is evident, starting with the tightly fitted upper and lower receivers made from a billet of 7075-T6 aluminum. You can’t help but appreciate the solid feel that tightly fitted receivers give an AR, particularly when the two push pins can be removed for cleaning without requiring a hammer and punch. Machining marks were nowhere to be found, and the finishes were expertly applied. Aluminum components are hardcoat anodized before being coated in Wilson’s Armor-Tuff, a Cerakote-like finish. Carbon-steel parts like the barrel are Parkerized before being finished in Armor-Tuff, providing plenty of rust resistance.

The barrel is made with the same chamber specifications as the Beretta 92’s. The 16-inch barrel has six-groove, 1-in-10-inch-twist button rifling, and the muzzle sports 5/8×24-tpi threading. Wilson includes a Q-Comp device to reduce flash and muzzle rise.

The 10.38-inch TRIM handguard is the same size as those used on Wilson’s 5.56mm ARs. It also has thicker aluminum in key stress areas. In addition, it also uses much stronger 5/32 Allen-head screws to secure it to the barrel nut than competitive handguards. There’s also a shell deflector on the upper to protect left-handed shooters from ejecting brass; the mag well is deeply flared for quick reloads.

The AR9G lacks a forward assist, as do all Wilson Combat ARs. Bill Wilson feels this device is unnecessary adds and weight; he points out that out-of-battery stoppages shouldn’t happen if you’re using dimensionally correct ammo.

The magazine release lever, milled from steel, is aggressively checkered. Even the connector between the magazine follower and bolt catch is a solid steel rod protected within the lower receiver; other designs use fragile metal stampings. Also, the steel bolt catch has a block of aluminum integral to the lower receiver that prevents it from being bent from the forward movement of the bolt. Finally, the Tactical Trigger Unit (TTU) has parts CNC-machined or EDM-cut from hardened tool steel for durability and precise engagement surfaces, not your typical investment-cast or MIM parts.

To measure the AR9G’s accuracy, I shot it from a Caldwell Tack Driver rest at 50 yards using a Leopold Mark 4 scope with three different loads, then, for handling and CQB drills, I switched to an Aimpoint CompM3.

The AR 9G was very accurate; Black Hills’ 115-grain +P JHPs created the best five-shot group at just 0.88 inches. This is well under the factory accuracy guarantee of 2 inches. The trigger on my test rifle had a short, light take-up, a crisp break and minimal travel—exactly what is needed to deliver fast, accurate shots on target. According to my Lyman trigger pull gauge, the trigger weighed 4.5 pounds.

The carbine also ran well with nine different loads, except Winchester’s 147-grain WinClean BEB rounds, which did not eject consistently, and 147-grain PDXs, which did not feed reliably. Wilson’s 147-grain JHPs and Freedom Munitions’ 165-grain FMJs functioned perfectly, indicating that the AR9G handles heavy bullets, just not those Winchester loads. Bill Wilson explained that they aren’t recommended, along with Wolf steel-case and Blaser aluminum rounds, though 147-grain PDXs run well in the AR9B.

I shot the AR9G with three magazines from Glock, Magpul and Elite Tactical Systems (ETS). The OEM and Magpul magazines worked well. But the ETS magazine did not reliably lock the bolt open after the last round was fired. Bill Wilson recognized this issue and suggested replacing that magazine’s spring with an extra-power unit.

Overall, the carbine handled well due to its light weight, balance and furniture. The BCM Gunfighter grip was comfortable thanks to its 1911-like angle; the TRIM handguard was slim and easy to hold.

To see how the AR9G would run suppressed, I installed a Dead Air Ghost-M modular suppressor. This silencer can be used in both long and short configurations by simply removing four of the baffles, going from 8.75 inches and 12 ounces down to 6.2 inches and 9.6 ounces. According to Dead Air, the Ghost-M will reduce the 9mm signature by 34.6 and 22.8 decibels in long and short configurations, respectively. The Ghost-M also has a titanium tube while the first five baffles (and the last baffle) are made from 17-4 PH stainless steel. The three secondary baffles are anodized aluminum. This means the Ghost-M is durable enough for full-auto fire.

Firing the AR9G with the Ghost-M in its long configuration showed no point-of-impact shift at 50 yards, and the carbine ran flawlessly with minimal backpressure. Naturally, of course, the added length and weight made the lightweight gun muzzle heavy. More importantly, however, the AR9G sounded like a small nail gun with no first-round pop.

The field of AR-style 9mm carbines grows each year, but the AR9G sets itself apart from the middle- and down-market offerings by delivering far better quality of manufacture and engineering. This rifle is designed and built for the long run—easily one man’s lifetime of use—but it also carries a lifetime guaranty against defects. This platinum-class warranty, along with its high-quality construction, should make the AR9G retain its value much better than all other 9mm carbines.