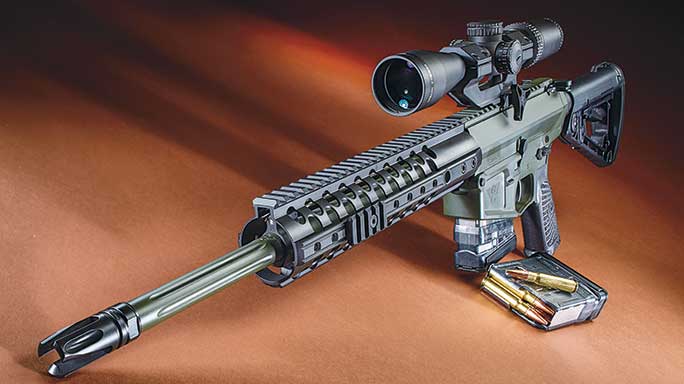 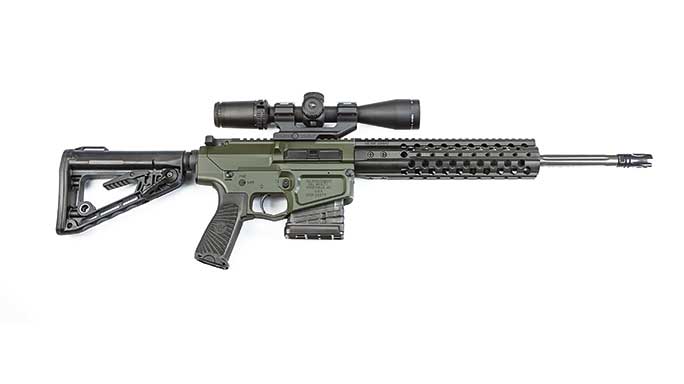 2 of 7
Wilson Combat Recon Tactical .338 Federal
Shooters can easily customize the free-floating TRIM handguard, as the sides and bottom are drilled and tapped for rails. Quick-detach sling sockets are also included on both sides. 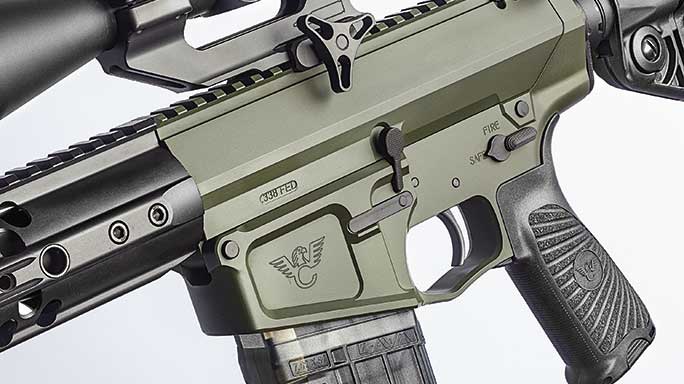 3 of 7
Wilson Combat Recon Tactical .338 Federal
Sleek, stylish and durable, Wilson’s “BILLet-AR” upper and lower receivers are precisely machined from a billet of 7075-T6 aluminum before being finished in Armor-Tuff. Several colors are available. 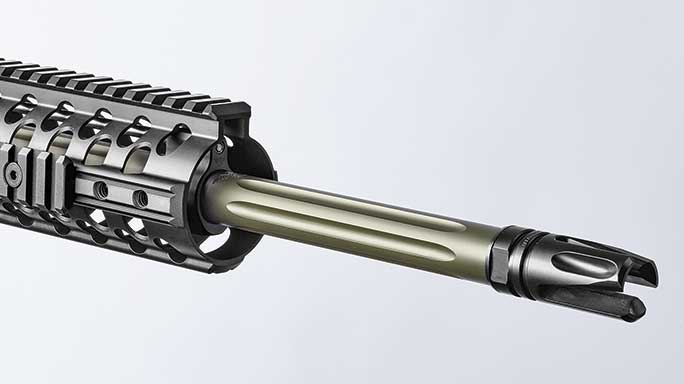 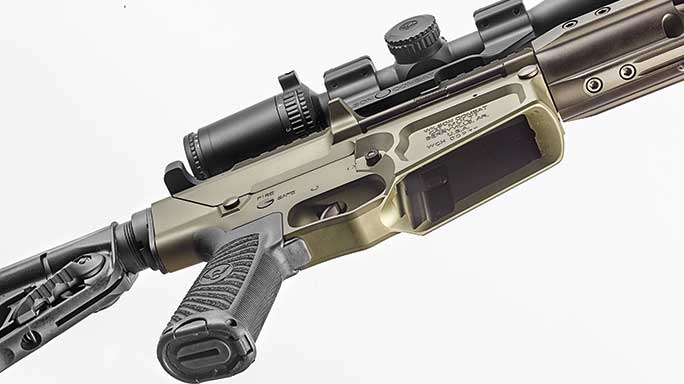 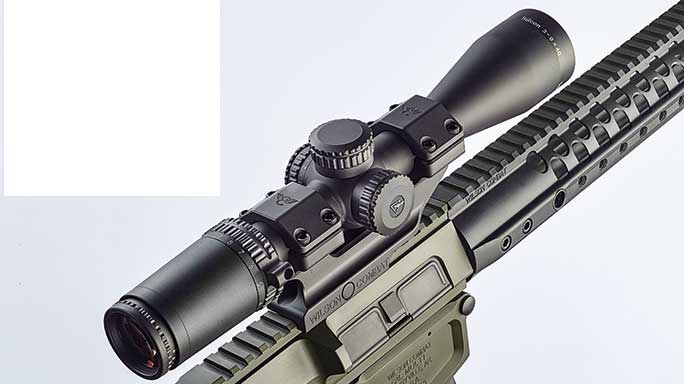 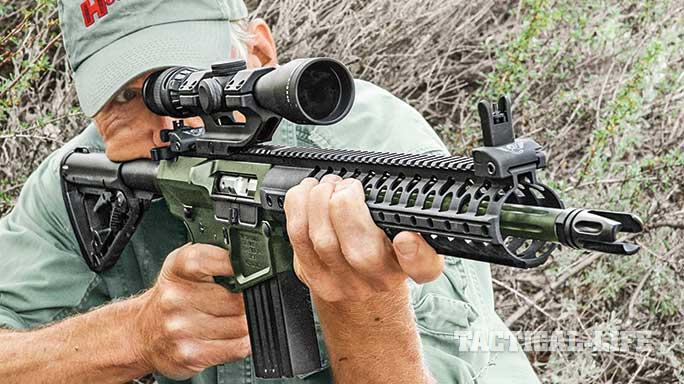 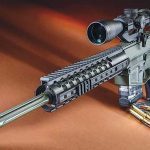 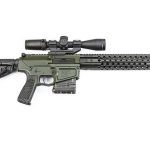 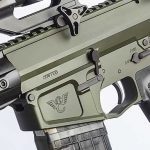 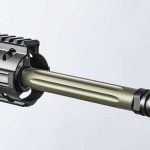 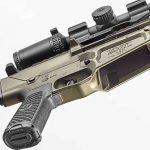 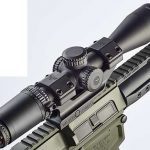 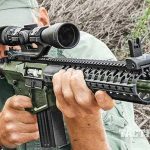 You must look closely to see differences in black rifles. An AR is an AR until you know how it’s made. Then rifles like the Recon Tactical from Wilson Combat sift themselves out. I’d met their kind in Texas, at Bill Wilson’s wooded retreat, where he and his wife, Joyce, indulge their interests in hunting and horses.

Whop! I held the same and squeezed again. Whop! Whop! A golf ball would have the spanned the splatter—a trio of 300-grain Barnes Tipped Triple Shock (TTSX) bullets on steel. Bill shrugged, saying, “Pretty normal.” Well, not for me! Not at 200 yards. Not from an AR in .458 SOCOM. “It works on hogs up close, too,” he added. “Let’s hunt.”

And we did. On the way, Bill explained that the .458 SOCOM appeared after Marty ter Weeme asked Tony Rumore about AR uppers for the .440 CorBon and .50 Action Express. Marty rebated the rim of a .50 AE to 0.473 inches. Manson Precision supplied a reamer, and CH Tool & Die offered a sizer for the Starline brass. At 1,900 fps, the Barnes bullets carry 2,400 foot pounds of energy (fpe) out the muzzle.

But I’m no masochist. After proving a boar weighing over 200 pounds was no match for the .458 SOCOM, I traded it for a Wilson Combat AR in Bill’s 7.62×40 WT cartridge, a necked-up .223. When we still-hunted within range of a worthy boar, the 110-grain Barnes TTSX from the 1-in-12-inch-twist barrel dropped a fire-hose trail from the double-lung hit. “That bullet was pretty much designed for the 7.62×40 WT,” Wilson said.

Bill Wilson got his start in the handgun world in 1976, when he entered a new kind of match with a Colt Python. Police Pistol Combat (PPC) matches shared billing with those of the nascent International Practical Shooting Confederation (IPSC). Using stopwatches to “factor” a score and a ballistic pendulum to regulate power levels, the IPSC pleased many shooters and eventually spawned the U.S. Practical Shooting Association (USPSA).

Bill volunteered hours and energy to the USPSA—and traded his Python for a 1911. After tinkering with this .45, he tuned others. His training as a jeweler helped him mind the details. By 1978, he was peddling parts and accessories. Later, he adapted 1911s to the .38 Super, “the Depression-era solution to bulletproof vests on bootleggers.” Each magazine held two or three more .38 Supers than .45s, Bill pointed out. “In 1986, that was high capacity!”

Bill’s pistol work evolved into the multi-million-dollar Wilson Combat business located in Berryville, Arkansas. Its payroll now numbers nearly 100. Bill and Joyce have turned the company’s operations over to their son, Ryan. Joyce, also a competitive shooter and a pilot who flies cross-country Powder Puff races in a Cessna 182, told me, “Bill no longer fires 100,000 rounds a year, but he’s still building pistols. Rifles, too.”

Of course, everyone who can spell “AR” now sells them. But I learned that Bill Wilson’s are different. They’re amazingly accurate, utterly reliable. Their triggers break crisply at 3.5 to 4 pounds. Superior machining shows not only in their silky-smooth cycling, but in details unrelated to their functioning. Their fit and finish rival that of high-quality bolt-action rifles.

After my Texas visit, Wilson Combat announced an equally fetching AR in .308 Winchester/7.62mm NATO. This leap, from .223/5.56mm to the .308 clan, mandates many changes. The plus-sized action adds weight and bulk. Wilson pares both to a minimum. And now the company has begun offering rifles in .338 Federal.

Like what you’re reading? Check out the rest of this article in ‘AR Rifleman’ #189. For information on how to subscribe, please email [email protected]outdoorgroupmags.com or call 1-800-284-5668. 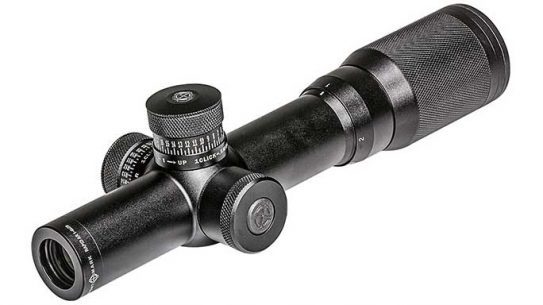