7 of 7
ArmaLite’s AR-10A4 rifles
The ArmaLite gun is about 2 pounds lighter and 8 inches shorter than the full-size FAL, an important factor because the BOPE usually is deployed for long periods of time in mostly hilly, densely constructed areas.

Depending on what part of the world you’re talking about, law enforcement agencies vary quite widely in terms of tactics and gear employed due to the actual threats they’re expecting to face. Let’s take Brazil as a case in point.

South America’s largest (3.2 million square miles) and most populated (more than 200 million people) country, Brazil faces several large-scale criminal activities consisting mainly of drug-related matters. Although not a major producer of marijuana and cocaine, the nation rates as a major importer from neighbors such as Bolivia, Colombia, Paraguay and Peru, both for local consumption and for re-routing to Europe, either direct or via Africa. As is common in other parts of the world, drug trafficking is concentrated in the country’s main metropolitan areas, such as Rio de Janeiro, which has over 6.5 million residents. Brazil’s national homicide rate in 2014 reached 29 deaths per 100,000 people, the highest since 1980.

The bad guys get their best weapons mainly via the very same drug routes, such as Paraguay and Bolivia, as their borders with Brazil are virtually uncontrolled. Gun shipments are occasionally found and seized by LE officials while en route to their final destinations, but significant caches are more frequently caught after major confrontations and the capture of hideout depots. The gangs in Brazil use a variety of weapons—anything from M1 Garands and BARs to whatever AR-15, FAL and AK variants you may think of, plus subguns, shotguns and handguns.

Broadly speaking, the country’s public security system can be divided into federal and state police forces. The federal side, under the direct control of the Ministério da Justiça (Ministry of Justice) includes the Polícia Federal, the local counterpart to the U.S. FBI, and the Polícia Rodoviária Federal (Federal Highway Police), responsible for actions along the 38,000-mile network of federal roads. The Federal Police is also in charge of border and immigration control, and the prevention of international drug trafficking, contraband, terrorism and the like.

All 26 Brazilian states and the Federal District have both Polícia Civil and Polícia Militar organizations, the former being in charge of criminal investigative work and the operation of the Delegacias Policiais (called Distritos Policiais in some states), where criminals are taken in order to be booked and initially charged with law violations. The Military Police forces have ranks similar to the armed forces, from private to colonel, and wear uniforms that vary from state to state, being in charge of general patrol duties and immediate responses to criminal emergencies, plus carrying out major armed operations on a pre-planned basis. They also have special units working along state-operated roads and highways.

Now called the Polícia Militar do Estado do Rio de Janeiro (PMERJ), Rio’s Military Police was officially created on May 13, 1809, as the Divisão Militar da Guarda Real da Polícia da Corte in the wake of the arrival of the Portuguese Royal Family to the colony. The original, 218-men strong organization gradually reorganized over the years and has matured into the present strength of about 43,000 men and women. Under its current organizational structure, the Comando de Operações Especiais controls a number of specialized outfits (airmobile, K9, riot control, maritime), the most prominent of which is, for sure, the famous Batalhão de Operações Policiais Especiais (Special Police Operations Battalion), popularly known as the BOPE.

There’s a general saying in Rio that translates into English more or less like this: “When the going gets tough, call the police. When it gets tough for the police, call the BOPE.” Enter the battalion’s day-to-day combat elements—the Equipes de Operações Especiais (Special Operations Teams)—men who are called in to act (practically every single day) in high-risk tasks. To face these warzone-like police combat scenarios in the “Wonderful City,” the BOPE requires reliable weapons to match the unit’s constant, top-notch physical and tactical training programs. Until recently, the BOPE was equipped on a roughly 50/50 basis with 5.56mm NATO Colt M16A2 Commando carbines and 7.62mm NATO IMBEL-made FAL Para rifles, but several decades of very intense use of both types began to show that it was just about time for an up-to-date replacement to be called into service.

In 2008, the BOPE began a very detailed technical evaluation and procurement program to obtain a new 7.62mm NATO rifle for general adoption to substitute the 50-year-old (in Brazilian service) FAL rifles of Belgian origin and local manufacture. The winner was announced in early 2014: the U.S.-made ArmaLite AR-10A4. Deliveries began in July of 2014, and following the required troop training and familiarization process, the AR-10A4 entered service and is now in its new full-time job with Rio’s “men in black.”

This modern-day descendant of Eugene Stoner’s original and, at that time (mid-1950s), futuristic AR-10 design has already been accepted by the skillful Brazilian LE operatives. Those operators with whom I spoke have pointed out some the gun’s valuable features, starting with the AR-10A4’s controls and manual of arms, which are similar to the M4s and AR-15s they have been using for many years. Equally prized is the fact that the ArmaLite gun is about 2 pounds lighter and 8 inches shorter than the full-size FAL, an important factor because the BOPE usually is deployed for long periods of time in mostly hilly, densely constructed areas.

All of the BOPE’s AR-10A4s came equipped from the factory with EOTech 552 holographic sights on the flattop upper receiver rails and vertical foregrips on the bottom rail. Folding backup iron sights (a front post and an aperture rear) are also available in case Murphy’s Law kicks into action and their batteries die. Picatinny rails are also present on the sides of the fully machined-aluminum handguard for the addition of other accessories, and the rifles come with rail covers for more comfortable handling when not in use.

The result is a top-tier, 7.62mm NATO rifle ready to help BOPE operators engage threats from “conversation distance” out to longer ranges due to the rifle’s power and performance capabilities. Thanks to the help of one of America’s most renowned rifle manufacturers and its AR-10A4, the BOPE has the firepower it needs to fight the heavily armed threats it faces on a daily basis. 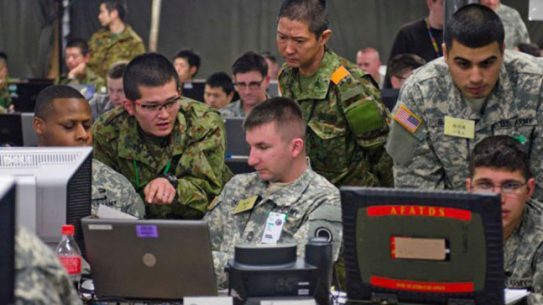