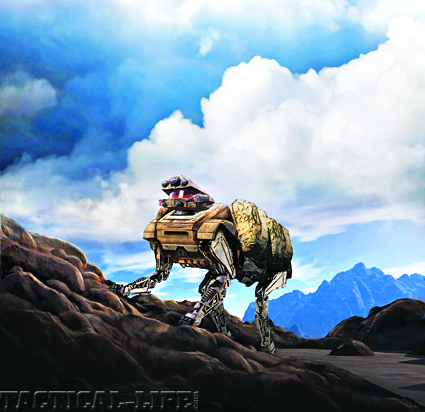 Today’s world has become digital with instantaneous transmission of limitless information, but it also is immutably physical. A good deal of terrain remains unimaginably rough going. In fact, less than half the globe’s land mass is accessible by wheeled or tracked vehicles, although two- or four-legged creatures can walk nearly everywhere. In military operations, supply from the air has improved access for soldiers who must fight over remote and difficult ground. However, nearby airfields are frequently non-existent in contested areas; air drops are unreliable, often parachuting provisions to adversary forces, and helicopters are not large enough to sustain major forces that may operate far from supply centers. This means troops face the same dilemma that has plagued them since prehistory. They must hump enough gear and supplies into the bush to cover operations that can stretch into weeks and keep their logistics lines open. The only other ready alternative is to use four-legged carriers—horses, mules or other beasts of burden to carry packs and other equipment where trucks cannot go. It’s no surprise that animals are still on patrol with human warriors, frequently carrying state of the art weapons, digital communications and support systems and other advanced gear.

LS3 Robot
Soon, however, things could change radically. A couple of years from now a developmental team headed by Boston Dynamics, an engineering company specializing in robotics, will produce a four-legged prototype robot with the size, weight and load-carrying capability of a strong pony. The program, slated for 30 months with a $32-million budget from the Defense Advanced Research Projects Agency (DARPA), kicked off in January and will produce the Legged Squad Support System (LS3).

This idea is anything but far-fetched. Boston Dynamics already has produced a smaller robotic quadruped under a similar DARPA contract. Dubbed BigDog, the robotic pack carrier uses a 15-horsepower internal combustion engine that powers a sophisticated combination of computer-controlled, hydraulically actuated legs, sensors, controls and communication systems that enable the device to mimic the motions and reactions of an animal with the ability to travel over very rough terrain. No robot can yet traverse the roughest terrain a human can, although performing at that level is a long-term goal. A succession of prototypes has demonstrated the basic design concepts of the quadruped robot. 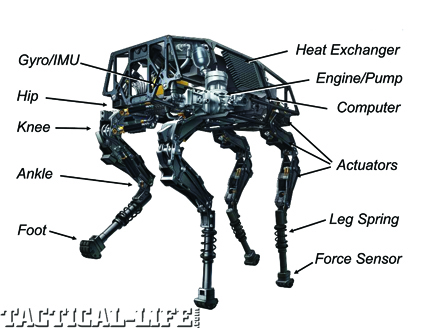 The BigDog’s water-cooled engine drives a high-pressure hydraulic pump that powers low-friction actuators regulated with two-stage servo valves. Each leg contains four actuators replicating hip, knee and ankle joints, and all the actuators also contain sensors that measure joint position and force. That data is fed to the onboard computer, along with more than 30 other sensors, stereo cameras and laser rangers (LIDAR) embedded throughout the platform, which will enable the robot to move efficiently and negotiate changes in surrounding terrain without remote control inputs (prototypes still require a human operator with a handheld control unit). The entire control system enables BigDog to assume upright and squatting positions, and move at a variety of gaits from a crawl using one leg at a time to a trot with pairs of legs, to running and even jumping. 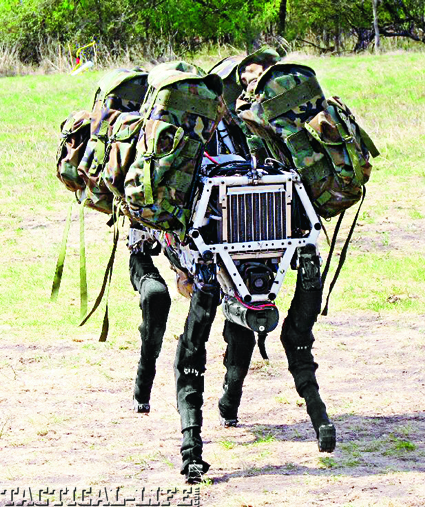 The BigDog robotic quadruped has successfully carried field packs and similar gear in tests, and LS3 will handle larger and heavier loads.

In lab tests, the robot has run at a respectable 6 mph speed, all while maintaining stable posture. The robot is about 3 feet tall and long and about 15 inches wide, weighs about 240 pounds and can carry loads up to 340 pounds on flat ground, and around 120 pounds when climbing on difficult trails. The robot successfully completed a 12-mile hike without refueling and these capabilities will increase. Other improvements will enable the robot to get up if it tips over, reduce the noise signature (which currently sounds like a motorcycle), eventually increase autonomy so BigDog can move without operator intervention and increase mean time between repairs.

Videos of the BigDog in action, found easily on YouTube and other internet sites, are eerie and worth a look. The robot resembles a headless donkey. The platform walks with surprisingly lifelike motion. It’s inertial sensors enable it to maintain equilibrium even when shoved, and it marches up and down hills, and through snow and ice. In lab tests, BigDog handles obstacles, rough ground and even bounds through the air at speed. 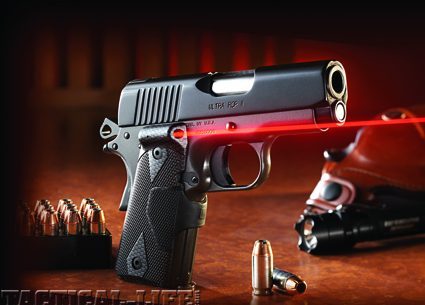 Today’s world has become digital with instantaneous transmission of limitless information, but it also…