The scenario is all too familiar. A squad of troops cradles their M4 carbines, safeties off, ready for action. They lean against a building, continuously scanning the street, facades and rooftops facing them for the slightest sign of lurking gunmen intent on killing Americans. The squad is poised to enter the building and others next to it, clearing them room by room in a search for insurgents and weapons caches, and they expect opposition. Fighting house-to-house is dangerous, grueling work. The medic with this small unit expects to stay busy. 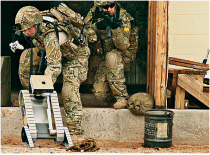 The near certainty of taking casualties during close-quarter combat engagements is compelling motivation for major defense research and development initiatives that may take men out of the loop—or at least out of immediate harm’s way—during reconnaissance patrols, search-and-destroy missions and urban combat when a hidden quarry holds the advantage against soldiers who must hunt them down. These efforts concentrate on creating UGVs (unmanned ground vehicles) to take over dangerous tasks, operating with remote or with preprogrammed controls, to ferret out vital information on enemy positions and strength without exposing anyone to risk in traditional searches or reconnaissance by fire operations.

Readers familiar with military systems know that UAVs (unmanned aerial vehicles) have been staples on the battlefield for decades, and reliance on systems such as the Predator, Global Hawk, or Hunter has expanded exponentially in just a few years.

Questions about the effectiveness and cost of UAVs have risen since these systems began service, but a recent article in the New York Times reported that Taliban and al-Qaeda insurgents in Afghanistan and northwest Pakistan have developed large if grudging respect for UAVs that carry and launch missiles.  These strikes are responsible for killing dozens of insurgents and disrupting operations, and the insurgents have no capability to stop or even detect them. Both the Pakistani and Afghan government have argued that these attacks have killed more civilians than guerillas, but Taliban and al-Qaeda have acknowledged that the systems are effective enough to keep insurgents from gathering in force. They simply have no way to determine if they’re under surveillance and in potential danger when they do. Critics argue, however, that Taliban assessments of UAV effectiveness could be efforts to encourage continued use of systems that create more strategic harm than good.

RECCE Robotics
Military reconnaissance requirements frequently are more complex than those for EOD robots. For example, bomb disposal units rarely deploy such vehicles in hostile environments with adversaries who are intent on disabling them. Vehicle size usually is not crucial, and propulsion systems typically move on level ground in areas police already have secured. Clearly, battlefields can’t be roped off, and UGVs must operate in hazardous conditions and surmount innumerable obstacles.
The U.S. Army has by far the greatest need for effective UGVs, and its developmental efforts have encompassed two general approaches. The first, more traditional, direction involves independent research and development efforts with separate military project management organ­­­­­­izations operating with defense contractors who often have won design concept and prototype operation competitions based on shopping lists of specific capability requirements. One such project, the Crusher, developed in 2006 at the National Robotic Engineering Center at Carnegie Mellon University, proved the utility of large, heavy UGVs and proved technologies incorporated in other systems.

The second approach is development within a larger integrated framework that incorporates a variety of weapons, sensors and platforms that will function in a system-of-systems operational structure. By far the largest such Army program is the FCS (Future Combat Systems), billed as “the cornerstone of Army modernization.” The program integrates new equipment technology development and organization of Brigade Combat Teams, the Army’s primary fighting units. In both cases, the Defense Department’s Joint Robotics Program ensures all these efforts complement one another by working with the Robotic Systems Joint Program Office, DARPA (Defense Advanced Research Projects Agency), the Army Research Lab and the Army Science and Technology Board, through a collaborative alliance named the National Center for Defense Robotics.

FCS is on schedule to roll out several of its systems in the next couple of years. On the horizon: eight new manned ground vehicles, several unmanned air and ground vehicles, the NLOS-LS (Non Line of Sight Launch System) artillery and launch system, and several advanced sensors, all linked through digital network software called SOSCOE (System of Systems Common Operating Environment). Currently, the program is working on two UGV classes, the SUGV (Small Unmanned Ground Vehicle) and the MULE (Multifunctional Utility/Logistics and Equipment Vehicle).

Man-Packable SUGV
The SUGV, adapted from iRobot’s PackBot, is a 30-pound, man-packable system design for urban combat operations, able to operate in tunnels, sewers and other confined spaces. It can carry up to six pounds of payload, cameras or other sensors to detect chemical or toxic materials. The tracked vehicle can be configured to climb over obstacles or up and down stairs. A soldier can operate the system remotely with an Xbox 360 control console, or it can function with an ANS (autonomous navigation system). SUGV has successfully completed extensive testing, and it is scheduled for fielding with Infantry Brigade Combat Teams in 2011.

Multi-Mission MULE
The other FCS category, the MULE, handles transport, explosive ordnance disposal and neutralization, and reconnaissance missions, freeing troops in small units from carrying heavy loads of supplies and ammunition or relying on aerial replenishment in the field and also protecting them in high-risk operations. MULE weighs in at 2.5 tons and uses a common mobility platform, a six-wheeled vehicle with an articulated suspension to handle travel in rough country, a control unit and an autonomous navigation system that can link to manned vehicles to follow them in convoy.

Mission equipment packages permit three configurations—transport and counter-mine MULEs and ARV-A-L (Armed Robotic Vehicle-Assault Light). In transport configuration, the MULE can carry up to 2,400 pounds of infantry equipment and can follow small units over rough terrain. The counter-mine variant can find and take out anti-tank mines with a Ground Standoff Mine Detection System. The ARV can operate an M240 7.62mm machine gun, four Javelin guided antitank missiles, and an RSTA (reconnaissance, surveillance and target acquisition) system to help infantry units find and destroy enemy weapons and emplacements. This family of vehicles also has worked well in testing and may see service before implementation and fielding of the full FCS.

FCS UGVs have received significant att­ention because of the size, complexity and cost of the program, but a wide variety of other ground vehicles for use by the U.S. Military and allied nations are currently in operation or completing development. These include wheeled, tracked, or even legged vehicles, both autonomous and teleoperated with remote controls.

Among the remotely controlled UGVs is the Marine Corps’ Gladiator TUGV (Tactical Unmanned Ground Vehicle), built by Lockheed. The Gladiator is a small, tracked vehicle and can carry weapons such as the M240 machine gun in its SWARM (Stabilized Weapon and Reconnaissance Mount) remote weapon system. Gladiator also uses image intensifiers and thermal sensors to operate day or night, in all weather conditions. The TUGV is currently in service.

The TALON tracked robot, produced in the United Kingdom by QinetiQ, also is designed for recon and combat. In service since 2000 in the Army, the TALON looks like a toy tank, tipping the scales at between 60 and 100 pounds depending on configuration. It is fast-moving and has good endurance on battery power.

Robotic Rescuers
One of the oddest new UGVs is Vecna Technologies’ BEAR (Battlefield Extraction Assist Robot). Bear resembles the classic robot from 1950s sci-fi movies, but its purpose is serious—removal of wounded soldiers from dangerous battlefield areas. BEAR is 6 feet tall and can lift a 300-pound man in its articulated arms. BEAR’s legs are tracked, and it can kneel to lift a victim lying on the ground. The robot’s head, which contains sensors, is designed to look like a teddy bear and reassure anyone it lifts and carries to safety.

Autonomous UGVs can handle the same missions as their remotely controlled counterparts but operate independently, navigating with preprogrammed systems that integrate sensors to enable them to avoid obstacles in their paths. Some of these devices even incorporate artificial intelligence capabilities to adjust their missions as their environments or situations change. Autonomous robotic technologies include the MDARS (Mobile Detection Assessment and Response System), a joint Army-Navy program in operation for several years. MDARS is designed primarily to perform perimeter security patrols and surveillance in warehouses and other large facilities. It can find intruders or detect problems such as fires and floods, and also track items by scanning and reading inventory tags.

Another development with battlefield applications is the TAGS (Tactical Amphibious Ground Support) system. This experimental program is focusing on a variety of UGVs that will complement or ultimately replace the platforms currently in development for FCS and handle similar missions, ranging from combat assault and support to casualty evacuation.

UGVs ranging in size from toys to platforms large enough to carry tons of gear already are making war theaters safer for the soldiers who must risk their lives in dangerous missions, and there is no doubt that even more robots will come to the rescue in the future, helping keep troops from harm when they confront the enemy. 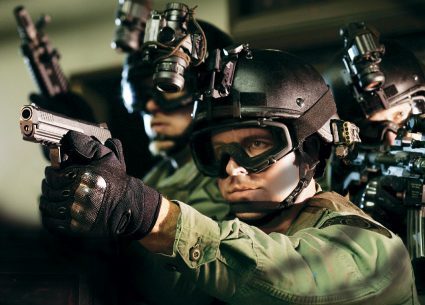 The scenario is all too familiar. A squad of troops cradles their M4 carbines,…