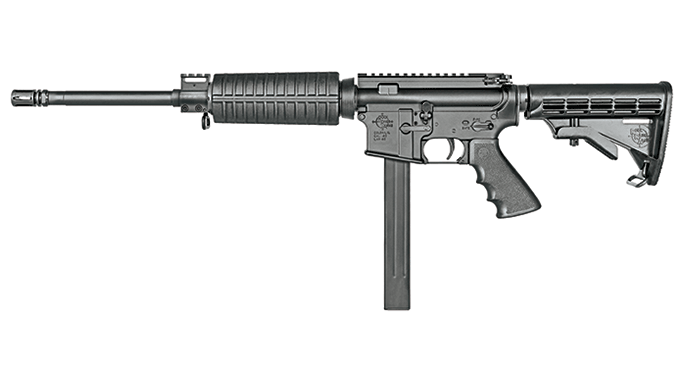 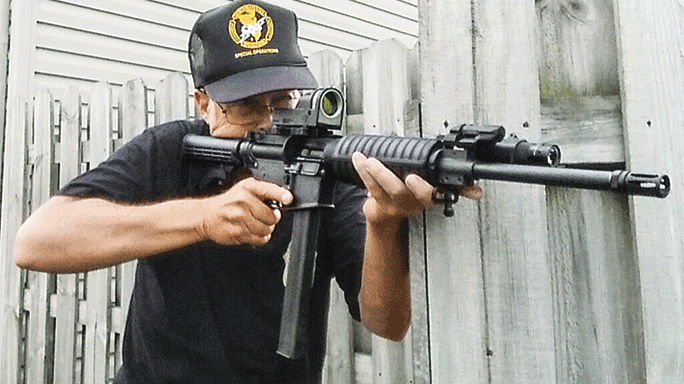 2 of 6
Rockin’ the .40: Rock River Arms’ LAR-40 Carbine
The author tested the LAR-40 in realistic situations from a number of positions, including off-hand and from behind barricades. He mounted a Safariland RLS flashlight on the gas block. 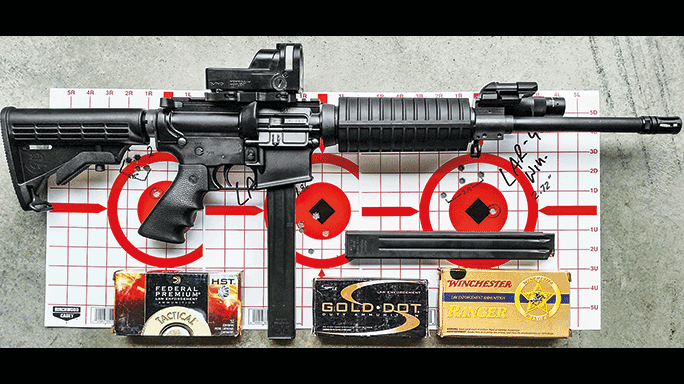 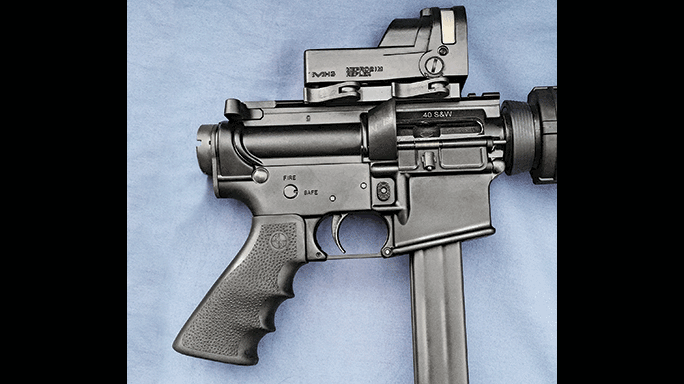 4 of 6
Rockin’ the .40: Rock River Arms’ LAR-40 Carbine
The LAR-40 CAR A4 comes with standard AR controls, a Hogue grip and a large shell deflector just behind the ejection port. 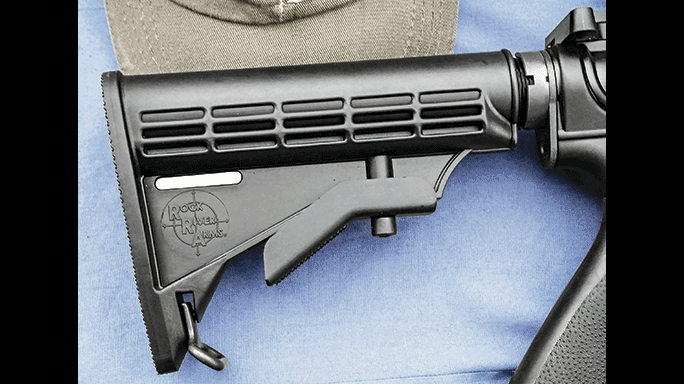 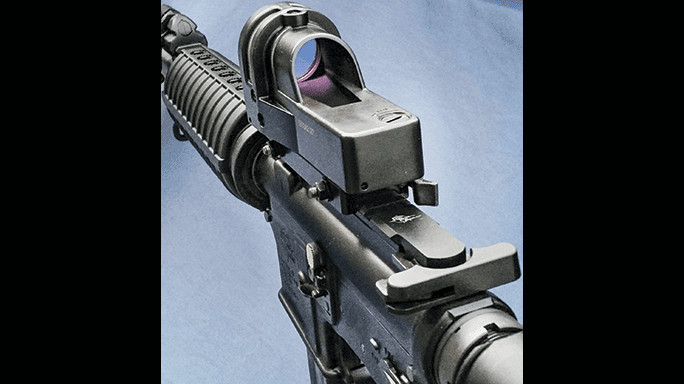 6 of 6
Rockin’ the .40: Rock River Arms’ LAR-40 Carbine
The flattop upper receiver makes it easy to attach sights and optics, such as the Meprolight MEPRO 21 shown. 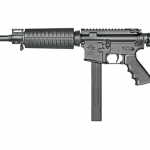 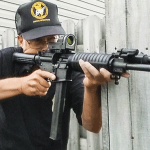 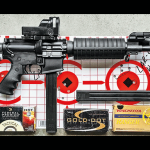 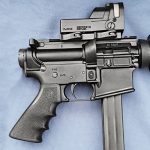 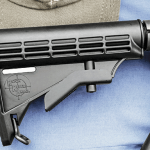 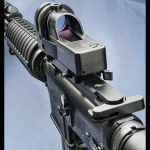 The .40 S&W cartridge has been around for over 25 years. It was intended from the start to be an effective autoloading pistol round for law enforcement. Spawned by the FBI after the failure of lightweight 115-grain 9mm JHP bullets, the agency first went to 147-grain JHP loads, then to a lightly loaded 10mm cart-ridge with a 180-grain JHP bullet.

But the 10mm’s 0.992-inch case length required a large-frame handgun. Smith & Wesson and Winches-ter realized that the same ballistics could be achieved using a case just 0.85 inches long, thus allowing the cartridge to be chambered in medium-frame pistols just like the 9mm. So, the .40 S&W was born. Almost overnight, S&W, Glock, Beretta, Sig Sauer, HK, Ruger and others began producing medium-sized, service-type handguns for this new cartridge. As the big state, local and federal agencies transitioned to the .40 S&W, smaller outfits followed suit. Today, despite the resurgence of the 9mm, the .40 S&W is still used by a huge number of law enforcement agencies, and whatever cops favor tends to see lots of use by the legally armed citizenry.

While the handgun is the omnipresent tool of LEOs and citizens carrying concealed, the long gun certainly has its place. In years past, this weapon was most commonly a pump-action shotgun, but more and more agencies and individuals have switched to rifles and AR-style carbines in recent years. Depending upon the unit, the location or the need, the AR could be chambered in anything from 5.56mm to 7.62mm NATO or a number of other full-bore rifle cartridges. However, some might find that an AR in the same caliber as their handgun could be useful, much like lawmen in the Old West. The extra barrel length, better sights, stock and increased ammo capacity certainly offer advantages. A pistol-caliber carbine will typically have a shorter maximum range and less penetration than its larger-caliber counterparts, which is especially useful in urban environments. For patrol uses, a pistol-caliber AR makes a lot of sense, as it extends the useful range and accuracy of the service handgun cartridge and can even add a logistical advantage.

With all of this in mind, I wanted to test an AR chambered in .40 S&W, and Rock River Arms (RRA) provided just the ticket with its LAR-40 CAR A4 carbine.

The LAR-40 CAR A4 has a 16-inch barrel, an overall length of 36 inches with its stock fully extended, and an unloaded weight of 7.1 pounds. The flattop upper receiver makes it easy to mount iron sights or optics. The upper also features a standard charging handle, but you’ll notice that there’s no forward assist. Instead, an enlarged shell deflector made of polymer is installed. The barrel is made of chrome-moly steel with a 1-in-16-inch twist rate. The muzzle has 5/8×32 threading and comes capped with an A2-style flash suppressor.

The gas block features a short rail for adding a front sight, but I found it the perfect place to mount my Safariland RLS tactical light. When properly attached, this light is in the 11 or 1 o’clock position so it won’t interfere with sights, and it’s easy to activate while grasping the traditional polymer handguard with my support hand.

The lower receiver sports a magazine well that is designed specifically for .40 S&W stick magazines. The controls, including the magazine release, safety and bolt release, are typical for an AR. At the rear is RRA’s Tactical CAR buttstock, a six-position-adjustable stock that can bring the weapon’s overall length down to 32 inches when fully collapsed—good for tight places.

The carbine is equipped with sling swivels at the front and rear, and its black hardcoat anodizing gives it a very business-like appearance. A close examination of the LAR-40 CAR A4’s exterior indicates quality of manufacture with strict attention paid to its fit and finish. I couldn’t find any exterior machine marks or other surface imperfections. For field-stripping information, see the owner’s manual.

As I was already making good use of the forward rail for my tactical light, I decided to mount an optical sight on the flattop upper. And, to evaluate the LAR-40 CAR A4 from an LE perspective, I wanted a rugged sight that was simple to use and didn’t require batteries. My solution was the Meprolight MEPRO 21 reflex sight. In a crisis, I don’t want to have to search for switches or activation pressure pads, or worry about dead batteries. Thankfully, The MEPRO 21 is always on and ready for action. By day, fiber optics illuminate the aiming point while tritium powers the sight at night. The sight automatically transitions between these two systems to ensure good contrast between the aiming point and the target area. The 30mm-diameter lens provides fast target acquisitions with both eyes open and is specifically designed for close-quarters combat. The MEPRO 21 can be used in conjunction with a magnifying scope, and it can be had with a triangular, bullseye, open-X, or 4.3- or 5.5-MOA dot reticles. It also is fitted with a quick-detachable mounting system and is easily zeroed with large slotted screws. I roughly sighted my MEPRO 21 using a laser bore-sighting device.

At the range, I tested the LAR-40 CAR A4 with three different .40 S&W loads: Federal’s 155-grain HST, Speer’s 180-grain Gold Dot HP and Winchester’s 165-grain Ranger T-Series HP. I used an Oehler 35P chronograph to see what kind of velocities I’d get with the LAR-40’s longer 16-inch barrel. As an example, the factory-listed velocity of the Federal HST load was 1,145 fps, but it produced an average of 1,331 fps in testing. The other loads all had similar results.

Once the chronographing session was completed, I fine-tuned the MEPRO 21 reflex sight atop the LAR-40 CAR A4 and found a point of aim/point of impact conducive to the test ammo. Then I placed targets at 50 yards and fired three 5-shot groups with each of the loads to test the LAR-40 CAR A4’s accuracy potential. My best group measured 1.86 inches with the Speer Gold Dot cartridges. I had a very nice four-shot cluster that measured 0.95 inches using the Federal HST, but a flyer opened it up to 2.16 inches. None of the groups were over 2.88 inches, and at 50 yards with my 61-year-old eyes, I feel that is pretty good practical accuracy. The point of aim and point of impact were pretty close and would easily put the shots in the “boiler room” at 50 yards or more. My MEPRO 21 came with an orange open-X reticle, and I had no problem seeing it in sunny conditions.

I recently received some interesting targets from Thompson Target and decided to use one of them to see what kind of practical accuracy I could expect at 50 yards with the LAR-40 CAR A4. This target is basically a B-27 with red “stop” or immobilization zones, including the head and upper vertebrae, upper thoracic and pelvic girdle. The target highlights vital organs and shows the skeletal system, and the skeleton is pointing a big revolver so you know it’s a lethal-force situation. For the head/pelvic girdle shots I wanted to have some added stability, so I used a standing barricade position. For the upper chest shots, I used a standing off-hand position. I fully loaded one of the 30-round magazines with a mix of the .40 S&W test ammunition and fired nine to 10 shots in each of the three immobilization zones. My shots hit home for the most part. I skidded a couple off the skull and one wild shot hit the right shoulder socket. I also scored one hit to the revolver cylinder. My “bad guy” was definitely in trouble, and again, the reflex sight’s aiming point showed up well in contrast to the target.

The remainder of my shooting was at steel pig silhouettes placed at 50 yards. This was the real fun part of the test, and I found that if I put that orange X on the center of the pig and squeezed the trigger properly, I could topple one right after the other. I emptied several 30-round magazines in this manner—shooting as rapidly as I could acquire a target and press the trigger.

I shot 150 rounds of the test ammunition and didn’t experience a single malfunction or hiccup of any kind. The 30-round stick magazines were easy to load using an UpLULA universal magazine loader, and they dropped free when the magazine release was pushed. Empties ejected with aplomb, and the LAR-40 CAR A4 was easy to handle in rapid fire.

Anyone familiar with the AR platform will be right at home with this carbine. It upped the performance of the .40 S&W cartridge, and I would have full confidence taking this carbine out into the field to augment my service sidearm. 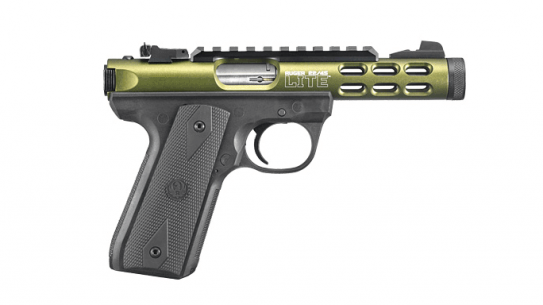 The all new OD green 22/45 LITE pistol from Ruger is made of aerospace-grade...