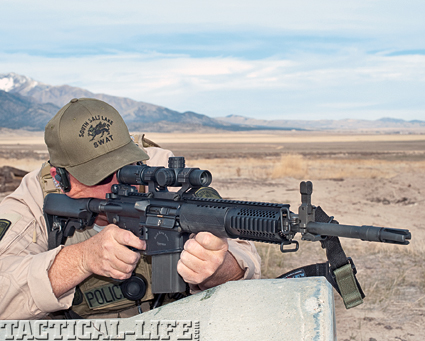 Officers need .308-caliber weapons like the LAR-8 to defeat barriers and go the extra distance. Shown with a Weaver Tactical 1-5x24mm scope in a YHM mount.

Having had the opportunity to test many rifles in the AR platform, it is nice to see something a bit different. The Rock River Arms LAR-8 is just different enough to pique my interest. It maintains the overall AR ergonomics while using the FAL magazine pattern. This provides for some differences that are pretty interesting.

In my experience at least, .308 rifles in the AR platform tend to be more individualistic than the 5.56mm versions. Impingement rifles generally work pretty well. Seldom has an impingement .308 failed to work in my hands. Although the 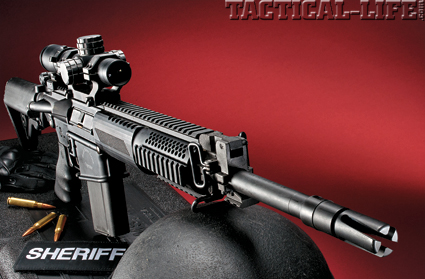 accuracy varies, they generally work with barrels measuring 16 inches or longer. Piston guns in this caliber seem to be a bit more hit and miss, with the exception of short-barreled rifles. The piston guns tend to work much more reliably with the 13-inch barrel for which so many military units are clamoring. Given their cost, however, they tend to be less than the norm. The most popular setup is a 16- to 20-inch barrel with a direct gas impingement system. The longer barrels are well suited to the DMR (Designated Marksman Rifle), while the 16-inch barrel is perfect for a patrol rifle. 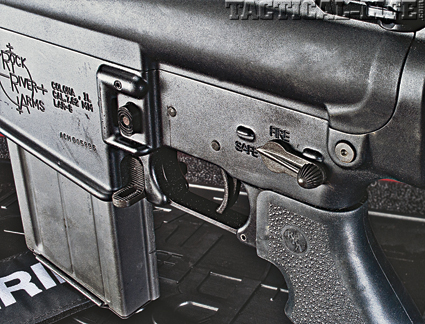 The LAR-8 features an ambidextrous magazine release as well as bolt release, located at the bottom rear of the mag well.

This system crossed my path around 2005 in the form of the BAR-10. Rock River Arms designed and patented this system and licensed it to Bushmaster. At the time, Rock River really was not in a position to pursue it, as they were still catching up with the popularity of their DEA model and several government contracts. For about 3 years or so, several thousand rifles were built and sold by Bushmaster.

At the time, both the AR-10 and SR-25 magazines were either problematic or incredibly expensive. Polymer magazines were still unproven and you could pay well over a hundred dollars for an SR-25 magazine. Magazines for the AR-10 platform were either expensive or simply did not work. You could convert M1A magazines, but having done that to dozens of them, it was a pain and often not all that effective. What was needed was a system designed around a more prolific and affordable magazine. The decision was made to design a rifle around the FAL magazine. Around this time, FAL magazines could be purchased by the dozen for as little as $5 a magazine. They were proven magazines with decades of combat experience all over
the world. This new system was pretty revolutionary at the time and it was met with reasonable success. The initial rifles had some issues as many new systems do, but for the most part they worked pretty well and the kinks were ironed out in the long run. However, as with most .308 rifles in the platform at the time, sales numbers were not expansive, and the design eventually reverted back to Rock River Arms.

I came across one of these rifles when it came in as a trade while working at a retail gun store. It was taken to the range and put through its paces. This particular rifle was flawless and the ergonomics truly suited me. The item most appreciated was the bolt release under the magazine well, which was ambidextrous and lent itself to fast magazine changes without shifting position. It was accurate and reliable. That rifle sold very quickly and always remained in my memory. So, when a tour of the Rock River Arms facility put its successor in my hands, I arranged for a test and waited anxiously.

Rock River spent a couple of years working out any of the minor issues that arose in the BAR-10. The LAR-8’s two major changes are the charging handle and the bolt carrier group. The original design’s spring-loaded detent would on occasion release with higher-pressure loads. That was replaced with a more common design. The bolt carrier group is completely different, revolving around a change in the extractor. As is often the case, little changes require more down the road and this resulted in a much better design. It retains the ambidextrous magazine and bolt release as well as the other differences. The LAR-8 will accept metric or inch magazines as well as current production Rock River mags.
Although it appears to be just an AR clone, few parts are interchangeable. Things like the adjustable buttstock will interchange, as well as trigger and safety mechanisms, but that is about it. The barrel attachment system is different, and the bolt carrier and charging handle are both longer.
The release is located on the bottom of the magazine well and presses down. It is easily accessible with the control hand, or can be accessed by the off-hand on magazine changes. The magazine release is ambidextrous as well and is in the same spot on opposing sides. Given the way the FAL magazine locks in place, it makes for a very simple and robust mechanism. The upper and lower are both forged.

The Elite Operator adds some nice features. The 16-inch, free-floated chrome-moly barrel is cryo-treated. The 1-in-10-inch twist rate allows for great accuracy with the 175-grain bullets as well as the typical 168-grain ammunition. It is topped off with a Smith Enterprises Vortex flash suppressor that is mounted in a RRA Advanced Half Quad forend. The rear is rounded and smooth, making for a comfortable hold when shooting unsupported. The front half is a quad-rail, allowing for all the attachments you may desire. A top rail matches nicely to the upper receiver for the use of optics and night vision as required. The RRA flip-up gas block front sight gives you a solid front sight that can be folded down when not in use. It also provides sling attachments on the bottom and both sides. A Hogue monogrip is used for the pistol grip and the buttstock is a RRA Operator CAR stock. This stock has a nice cheekweld that doubles as a battery holder. The unique buttpad moves down with a push of a button to access the compartment. It can be locked into five positions, providing for a solid mating to the shoulder. There are two separate flush cups on either side for sling attachments. 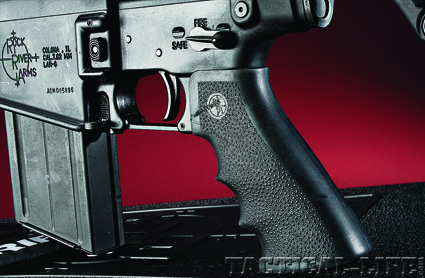 Along with the predictable two-stage trigger, the Hogue pistol grip has plenty of traction to give shooters more control.

For testing purposes, a GG&G rear sight was added to complete the BUIS (back-up iron sights). The new Weaver Tactical 1-5×24 scope was attached for the majority of the testing. This scope uses the CIRT (Close Intermediate Range Tactical) reticle. It provides an aiming dot surrounded by bracketing half circles. Mil lines for wind are present, as well as holdovers. It is very fast, very clear and very affordable. A Blue Force sling was added using the tactical side-sling attachment on the gas block and a flush cup rear.

Accuracy with this rifle was pretty solid. RRA posts a 1.5-MOA guarantee and is probably about right. The best group I produced that day was with the Federal Gold Medal Match ammunition, at 1.61 inches. Everything fell within that and 1.75 inches. Fired from the bare ground from an unsupported prone, there is little doubt a bench would yield better groups. But, given few officers are afforded a bench in the field, it was indicative of what you could do on the street.

This rifle is best suited as a patrol rifle for those looking for a bigger bullet, so it was tested that way. Most all of the shooting was done from unsupported positions or amidst the debris of the real world. The barrel length makes it very handy around debris and barriers. As .308 rifles go, its relatively light weight made it comfortable to carry around. The flash suppressor makes it great for team tactics, and the ergonomics made it workable even in full kit. After a few magazine changes, my appreciation of the bolt release placement returned. With a bit of practice it is really fast. It is just more intuitive to me. The ambidextrous magazine release was also fast to access. The stock provided a solid cheekweld for the optic, and the Weaver allows for very fast target acquisition. It is also light, small, and has some very simple knobs that are protected from accidental bumps.

The LAR-8 fed without issue using my own 10-year-old FAL magazines as well as the one provided with the rifle. After a couple hundred rounds, there was one magazine that would not hold open on the last round. It was one of the older magazines and no such issue arose with the other magazines. It still functioned perfectly, it would just fail to lock the bolt open on occasion. It would have been nice to test the polymer magazines, but they were simply not available at the time. The chance to test those will be something to look forward to in the future.

The two-stage trigger is a really nice touch, as it is my preferred system. The Rock River triggers are still the favorites of many, and for good reason. They are crisp, predictable, and above all, reliable. The trigger provides for the best possible accuracy yet maintains appropriate safety in a police environment. This rifle used a single-sided safety, but for those who prefer an ambidextrous safety, it can be added. 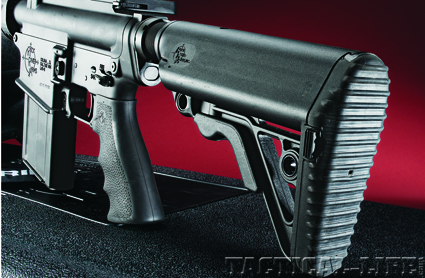 From a purely ergonomic standpoint, this rifle is set up to suit me well. The forend is exactly what is typically seen on my rifles. The non-railed portion provides for comfortable shooting seated, kneeling and around barriers. Yet a light can be added if needed, or even a bipod. The stock allows for a good position with optics or iron sights, and the adjustable buttpad is really nice. When shooting from prone, I moved the buttpad down a couple of notches and it provided a really solid position when kneeling. When the plate carrier was added, I moved the buttpad up and it provided very fast access while on the move. Overall, this rifle was very versatile.

It was nice to test a rifle that was a bit more of a departure in this platform. The move to the FAL pattern seems to work fine, and it facilitates what to me is one of the most intuitive positions for a bolt release on this platform. Magazine prices are a bit higher, but they still cost less than most of the competitors and are plentiful. It worked, and it comes pretty well equipped. The accuracy is what you would expect in a patrol rifle, probably a bit better. For those who are not tied to the typical AR-10 or SR-25 platform, this is a really nice alternative. It is especially suited to those who have no need to “accessorize” on a weekly basis. The Elite Operator comes well equipped right out of the box. Add some spare magazines and the sighting system of your choice and head to the range. Besides, spending the time shooting your rifle as opposed to altering it is not such a bad thing! 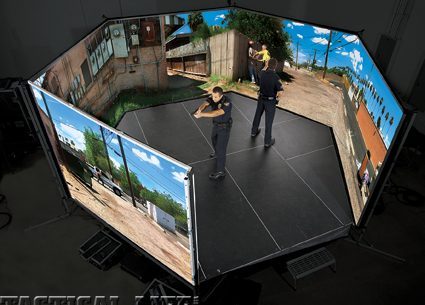 Officers need .308-caliber weapons like the LAR-8 to defeat barriers and go the extra…