0
SHARES
50
VIEWS
Share on FacebookShare on Twitter
Paired with an Aimpoint CompM4s, the 9mm LAR-9 SBR is a much more potent package than any handgun due to its increased accuracy, effective range and ammunition capacity.

When considering the current budget situations most agencies, departments, or even private citizens may find themselves in, utilitarian weapon platforms capable of serving multiple roles are at a premium right now. Nevertheless, some missions remain specialized enough to warrant a mission-specific weapon platform. 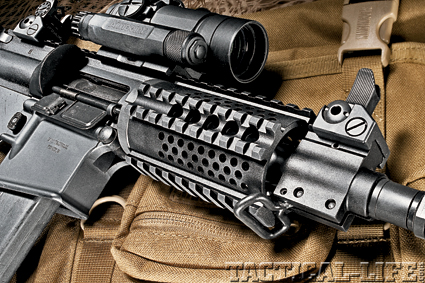 Despite the short barrel, RRA’s LAR-9 still features plenty of rail space on the free-floating quad-rail forend for accessories, along with the flattop receiver.

Night interdiction is one of these situations. For some time, several colleagues and I have been exploring the criteria of an effective night mission setup. Attempts at adapting an AR rifle into this role with a suppressor and day/night PS22 night-vision optic in front of an existing optic sometimes prove problematic. The latest solution was sought in the form of combining a Rock River Arms (RRA) 9mm LAR-9 SBR, Yankee Hill Machine (YHM) Wraith suppressor, and American Technologies Network (ATN) MARS4x-3P dedicated night-vision weapon scope.

Gun Details
The RRA LAR-9 SBR weighs just over 5 pounds with a 7-inch barrel surrounded by a free-floating quad rail. The rifle measures 24 to 27 inches in length with a six-position adjustable CAR stock. An A1 flash suppressor is mounted with a 1⁄2-36-lpi thread pattern, allowing for a simple switch out to the YHM flash suppressor compatible with the YHM Wraith suppressor. The 7-inch Wilson chrome-moly barrel features a 1-in-10-inch twist rate, which is suited to take advantage of the full range of 9mm loads. The barrel allows for the YHM Wraith suppressor to be mounted while still staying below a 16-inch barrel length on the LAR-9. 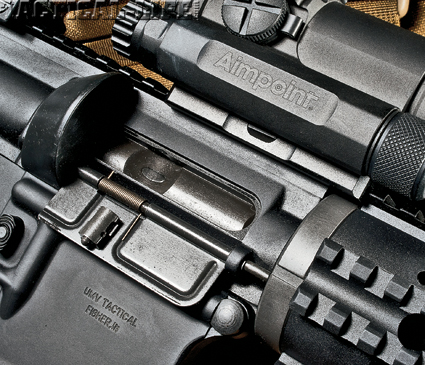