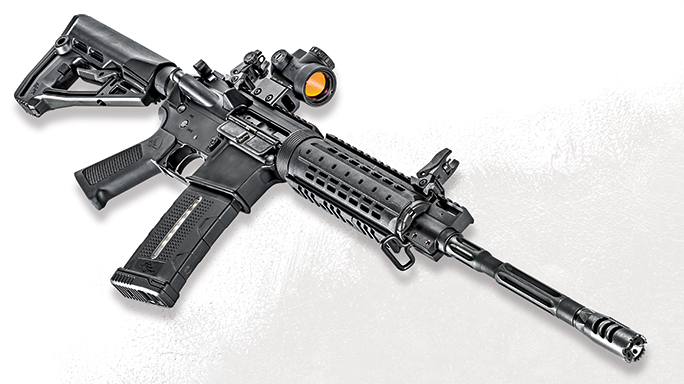 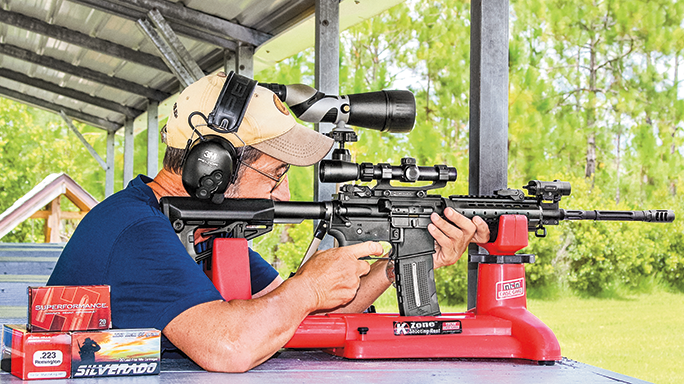 3 of 8
Photo by Alex Landeen
Rock Solid: Rock River Arms’ NSP CAR Rifle
Rock River Arms ships the LAR-15 NSP CAR with a set of polymer backup sights that are spring-loaded, meaning they’ll flip up in an instant when deployed. The carbine’s long top rail makes it easy to add optics as well, including the Trijicon MRO (shown). 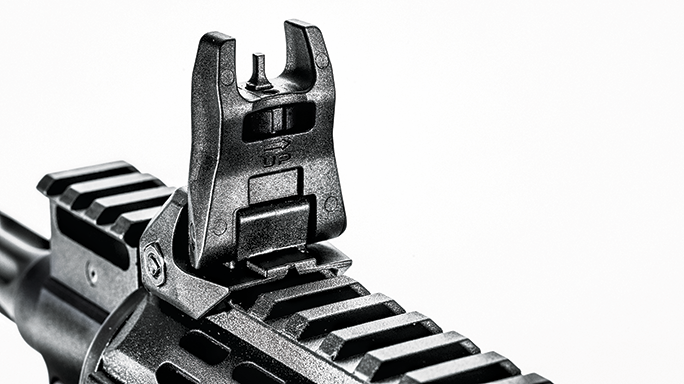 4 of 8
Photo by Alex Landeen
Rock Solid: Rock River Arms’ NSP CAR Rifle
Rock River Arms ships the LAR-15 NSP CAR with a set of polymer backup sights that are spring-loaded, meaning they’ll flip up in an instant when deployed. The carbine’s long top rail makes it easy to add optics as well, including the Trijicon MRO. 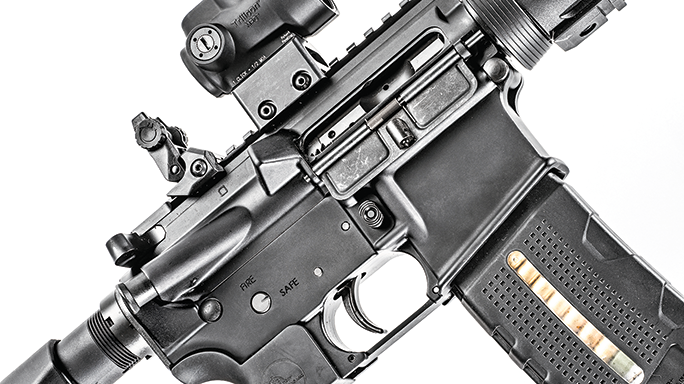 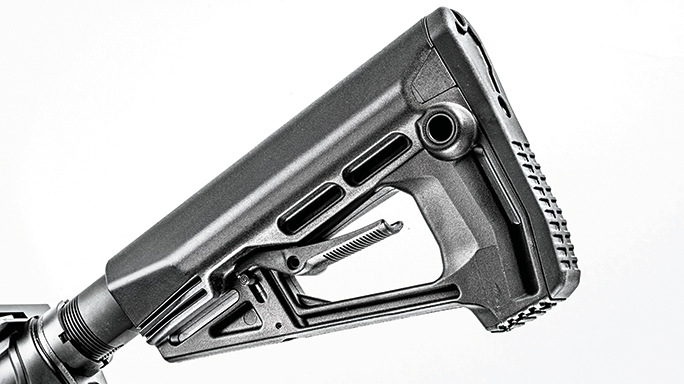 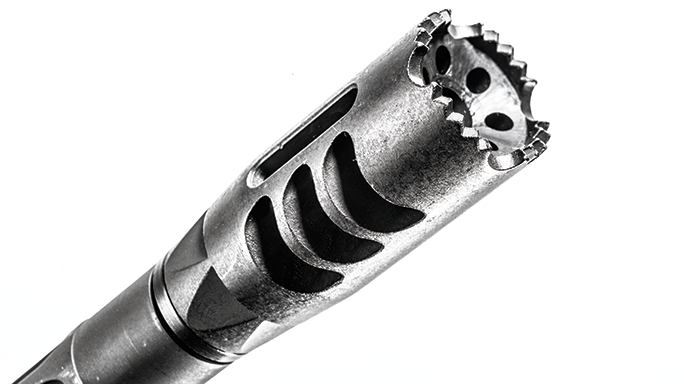 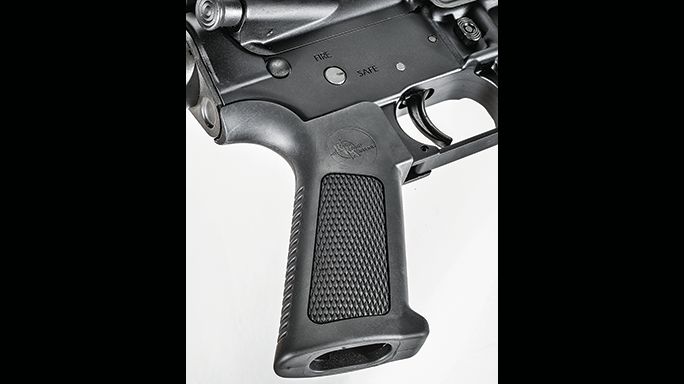 8 of 8
Photo by Alex Landeen
Rock Solid: Rock River Arms’ NSP CAR Rifle
RRA outfits the lower with its NSP Overmolded pistol grip as well as a two-stage trigger with a 4.5-pound pull. 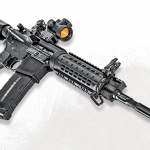 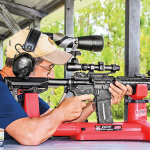 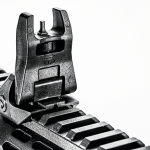 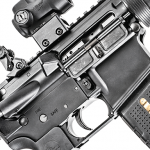 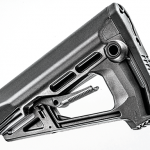 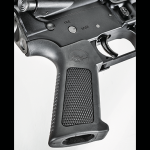 The new LAR-15 NSP CAR from Rock River Arms (RRA) is a well-made and competitively priced AR carbine that’s bound to attract interest in today’s crowded AR-15 market. This rifle has just about every feature someone would want without being weighed down by extraneous bells and whistles. On the other hand, this “no-frills” carbine is not a stripped-down gun that will need major modifications to mount accessories. Combine all of this with RRA’s reputation for reliability and accuracy, and you wind up with a lot of gun for the money.

The NSP is a no-nonsense gun just like the M16 I qualified with in 1966. Both are lightweight, well balanced, have a straightforward manual of arms and are easy to take apart and maintain. Many of today’s high-end ARs are just the opposite. They’re weighed down with bulky quad-rails, heavy piston-driven gas systems and all sorts of accessories that often increase these rifles’ overall weight by at least a couple of pounds and make them decidedly muzzle-heavy. Piston systems also need to be disassembled and cleaned, making maintenance more complicated. To be fair, piston-driven guns do run cooler and their chambers stay cleaner, but most homeowners and police officers are unlikely to fire a thousand or more rounds without cleaning their guns or letting them cool off. So, for the average user, simpler is better.

Even though the NSP isn’t a fancy gun, it’s well made and has some nice features. The upper and lower receivers are forged from mil-spec 7075-T6 aluminum that is then hardcoat anodized. The flattop upper has a full-length Picatinny rail for mounting optics. There’s also a rail on top of the gas block that will accommodate a front sight or a miniature light/laser. The non-free-floating, 16-inch barrel is fluted to dissipate heat and help reduce weight. The barrel is also hand-lapped at the factory so it doesn’t need to be broken in. RRA states that the rifle will deliver 1-MOA accuracy with appropriate loads, which is very good since the NSP does not have a free-floating handguard. The muzzle end has a Rock River Operator muzzle brake that is very effective. Even though 5.56mm NATO loads don’t kick much, the brake’s recoil reduction is noticeable when shooting quickly.

The LAR-15 NSP’s fire control system is also top-notch. The carbine’s two-stage trigger breaks cleanly at 4.5 pounds. That is quite good compared to the 7-pound triggers on many other ARs. In addition, the magazine release, safety selector and bolt release all operate crisply and positively.

To keep the NSP light, RRA makes substantial use of polymer in its construction. The polymer handguard, magazine, buttstock and flip-up sights are produced to RRA’s specifications. The handguard has a solid feel. It has permanent Picatinny rails on the top and bottom, and two short rail segments are included for mounting lights and/or lasers on the sides. The buttstock offers six adjustment positions and a wide cheekpiece. I was impressed with the stock’s diagonal bottom edge, which fits like a conventional stock in a rifle rest. This made it much easier to shoot precisely from the bench. The flip-up sights are more substantial than many other polymer sights. They are held securely in place by spring pressure, and when folded, they sit low enough so that a scope can be mounted above the rear sight. The front sight is hand-adjustable for elevation, which is much easier than having to use a sight adjustment tool, and the rear sight is adjustable for windage. Overall, the NSP is a very easy rifle to work with, which is just what the average shooter needs.

Having a straightforward functional design is good, but a rifle also has to be well made. The exterior looked good and all of the safeties and controls worked well when I picked the LAR-15 NSP CAR up at the Florida Gun Exchange. Later on I field-stripped it and thoroughly checked its exterior and interior, looking for scratches, tool marks, uneven lines, burrs, sharp edges and any other signs of poor manufacture. The charging handle and bolt operated smoothly and locked up tightly. The bolt never failed to go back into battery when the handle was drawn back and released. In addition, the bolt locked open every time on an empty magazine. Magazines also inserted easily, locked firmly in place and dropped free when the magazine release was pressed. The stock locked firmly in all four length-of-pull positions. There was a minimal amount of side-to-side play in the adjustable stock and even less play in the LAR-15 NSP’s two-piece polymer handguard.

The NSP has plenty of places to mount a wide variety of accessories. This versatility allowed me to move the front sight back a few notches on the handguard’s upper rail so I could put an Insight Procyon light on top of the gas block. Mounting the light on the gas block minimizes the offset between the lines of the bore, light and sights. The gas block’s top rail is a good place for a light or light/laser combination—provided that the rifle’s iron or optical sights are mounted high enough so that the light does not unduly compromise the sight’s field of view. The folding sights are useful as they can be used as backups if the scope is damaged and removed. However, it is important to re-zero the iron sights if they are removed from the rifle and then replaced to ensure accuracy.

The scope I chose for the NSP was a Leupold 1.5-4x20mm Mark AR MOD 1. It has a duplex crosshair that allows quick target engagements at CQB distances when the scope is set at low power, and also lets the shooter hit targets out to 300 meters when the scope is set accordingly. Three hundred meters is a good practical range for typical 5.56mm NATO and .223 Remington ammunition because of the relatively limited ballistic coefficients of most .224-caliber bullets. Therefore, a lower-power variable can be a good choice for tactical shooting with a 5.56mm. In addition, this particular scope’s 20mm objective lens and low magnification give it a very large exit pupil for maximum light transmission in low-light conditions.

Four loads were provided by their manufacturers for this evaluation. They included Liberty Ammunition’s 55-grain .223 Remington Silverado fragmenting copper HP, Hornady’s 55-grain .223 Remington Superformance GMX, Black Hills’ all-copper 50-grain 5.56mm NATO Barnes TSX and Black Hills’ 69-grain .223 Remington MatchKing. I fired three 5-shot groups with each of the loads at 100 yards, and I used the 69-grain MatchKing load to fire two 5-shot groups at 200 yards and two groups at 300 meters at the Volusia County Gun & Hunt Club range. The Liberty Silverado load just barely bested the Black Hills MatchKing ammo with a best group at 100 yards measuring just 1.29 inches. The average 100-yard groups were all under 2.13 inches, and the overall average for all of the groups at 100 yards was 1.67 inches. At 200 yards, the group average was 3.2 inches, and it was 5.49 inches at 300 meters. Given the gusting 4- to 8-mph crosswinds, this is very acceptable performance for a tactical rifle shooting .224-inch-diameter bullets.

To measure each load’s velocity, I fired five shots over a Competition Electronics chronograph. The fastest load was the 50-grain 5.56mm NATO load from Black Hills. At 3,205 fps, it produced 1,140 foot-pounds of energy (fpe) at the muzzle. All of the other .223 Remington loads produced between 1,047 and 1,055 fpe. This is good performance for both the 5.56mm and .223 cartridges from a 16-inch carbine barrel.

Rock River’s LAR-15 NSP CAR is a lightweight, reliable, well-made and accurate AR carbine that is ready for duty right out of the box. Its configuration allows many different accessories to be added, and its MSRP of only $1,120 makes it a good value for both new and established AR users. 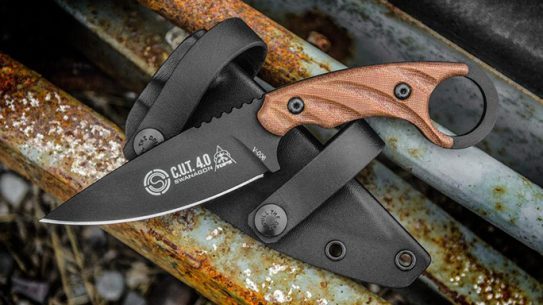 The all new C.U.T. 4.0 from TOPS Knives combines the combat capabilities of a...