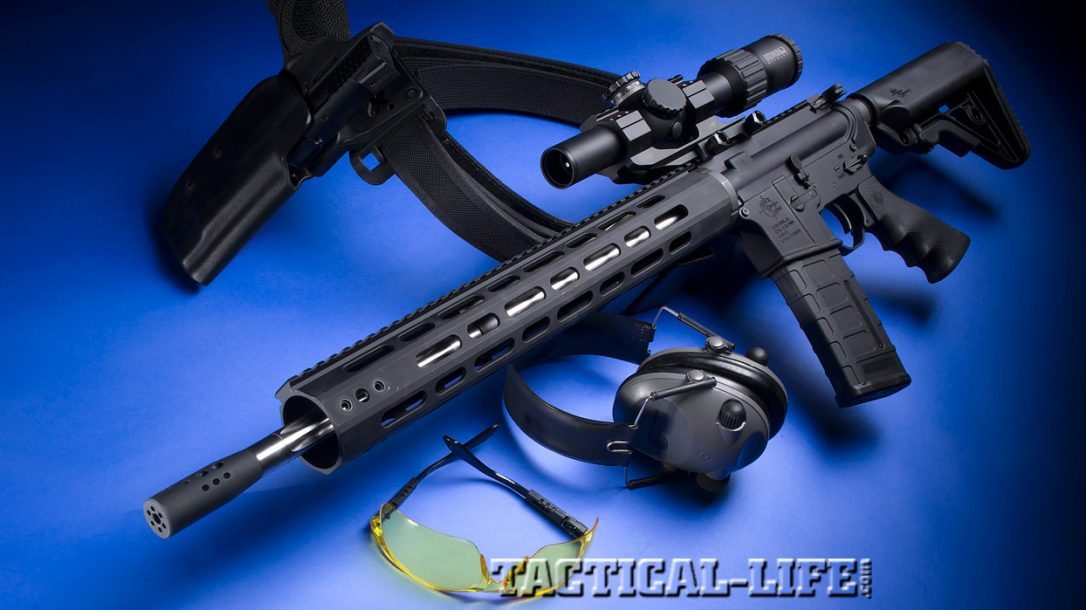 1 of 9
RockRiverArms-R3-cover-pic
Born to win, Rock River Arms’ new LAR-15 R3 Competition was built for speed, accuracy and can’t-fail reliability. A lot of time and energy go into making the first-class, fluted, 18-inch barrel, and the long, smooth, free-floating handguard is comfortable to hold and provides plenty of room for a far-forward grip. 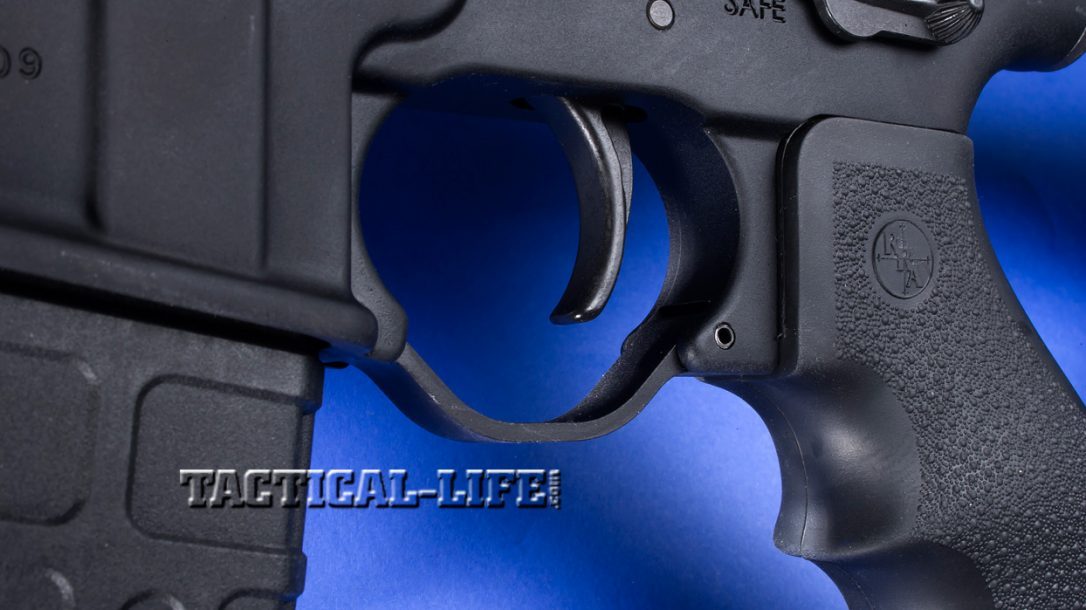 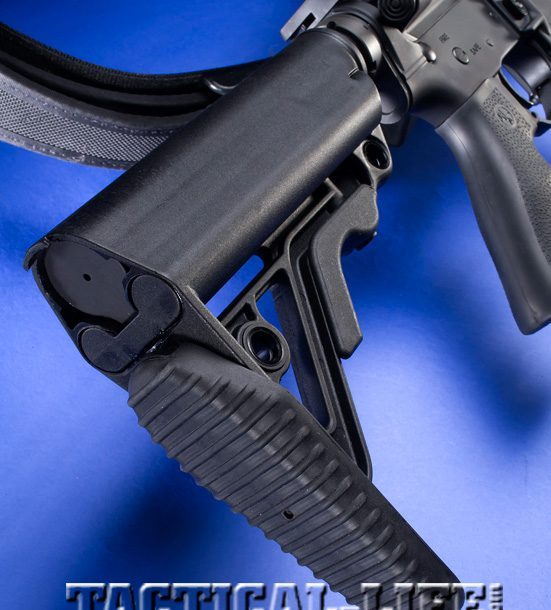 6 of 9
RockRiverArms-R3-buttstock-pad
The RRA Operator CAR buttstock is adjustable for length of pull and has a movable rubber buttpad that reveals two compartments for storing batteries or parts. 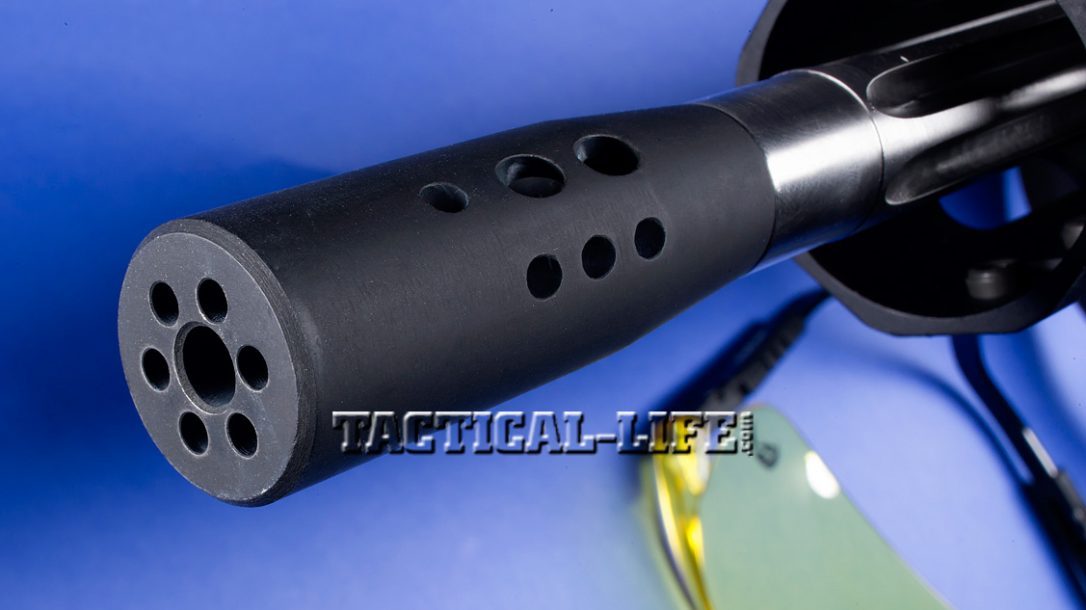 7 of 9
RockRiverArms-R3-barrel
Rock River’s special Directionally Tuned and Ported Muzzle Brake has a lot of holes that deflect gas to reduce felt recoil and muzzle rise to help shooters get back on target faster. 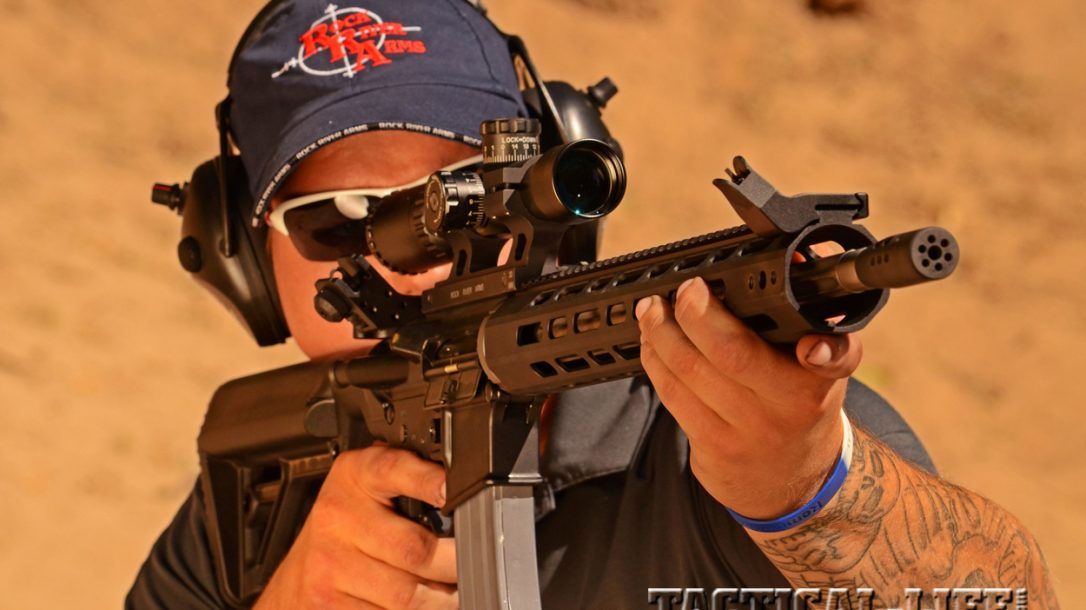 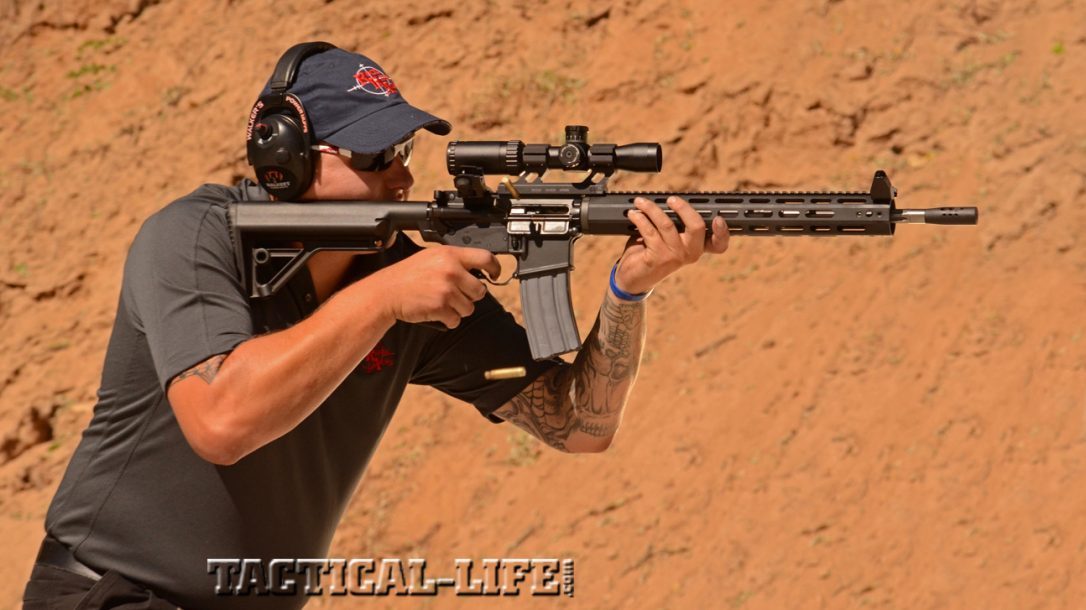 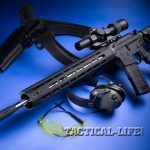 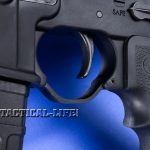 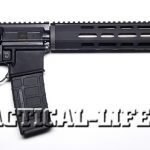 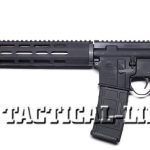 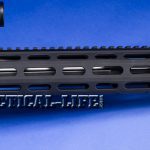 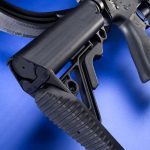 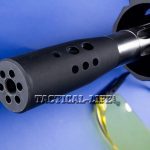 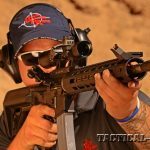 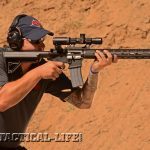 3-Gun competitions where participants use a rifle, pistol and shotgun are turning up all over the country, and membership in clubs keeps on increasing. Television shows that feature these matches help spark participation, but just the fact that the contests allow shooting enthusiasts the chance to use all three guns in a single match and compete against others with the same level of skill brings new members to the group.

Gun manufacturers have noticed and are building guns specifically designed for those who compete. While years ago manufacturers emphasized building civilian ARs that were either for general purposes, self-defense or hunting, many new ARs are now developed specifically for competition.

Rock River Arms (RRA) of Colona, Illinois, is one of those manufacturers who build such a gun specifically designed for the sport. A very recent addition to its catalogue is the R3 Competition, which is built on the LAR-15 platform with some very special shooter-friendly features that 3-Gun competitors are no doubt going to like.

3G Speed
Speed and precision are what 3-Gun competition rifles are all about, so RRA set out to build a gun that would meet those needs. Starting at the front, the company installed a special muzzle brake with two chambers that enhance accuracy and reduce felt recoil and muzzle flip so that shooters can get back on target as fast as possible for that critical follow-up shot. The chamber closest to the barrel redirects expanding combustion gas upward and to the rear to reduce felt recoil, and the forward chamber reduces the backwash of gas following the exiting bullet in an effort to reduce interference with the projectile’s trajectory as it leaves the muzzle of the rifle.

The 18-inch barrel, manufactured using 416 stainless steel, is button-rifled with a 1-in-8-inch twist rate. That twist rate was chosen because it tends to stabilize shorter 50-grain to longer 77-grain bullets. And stability is critical to accuracy. The barrel is also fluted, which not only reduces weight but also allows the barrel to retain much of the rigidness associated with bull barrels, which tend to be more accurate than lightweight, thin barrels. Fluting also increases the surface area to aid in cooling, another aid to accuracy.

The barrel has two outside diameters, with the larger being closest to the receiver. This increases the barrel stiffness in the rear portion and reduces weight out front. The barrel is also lapped at the factory, making it very smooth on the inside to further enhance accuracy. Lapping also has the added benefit of reducing fouling, making it easier to clean the barrel. To further increase the R3’s accuracy, RRA cryogenically treats each barrel, relieving stress.

A mid-length gas system is used, which puts the gas port about 9.5 inches forward of the chamber. This tends to smooth out recoil—that is, of course, subjective and depends on how the shooter perceives recoil—and reduces the speed of the bolt, decreasing stress on the bolt carrier group. That improves the rifle’s reliability compared to a carbine-length system.

Surrounding the barrel is a smooth, eight-sided handguard with lots of venting to keep the barrel cool. There is no contact with the barrel, which is an additional accuracy-enhancing feature of the gun. The smooth surface is more user-friendly than a railed handguard, and since it is about 15 inches long and extends almost to the end of the barrel, it allows the shooter to take a far forward grip with the off hand. This helps competitors make fast, controlled transitions from target to target.

This handguard is great for mounting 45-degree-offset backup iron sights. Users can also mount short Picatinny rail sections at the front in the 3, 6 and 9 o’clock positions. Another mounting point is located on the bottom, about halfway back. All of these mounting points allow for the attachment of various accessories, such as bipods or lights, where desired. A Picatinny rail runs the full length of the top of the handguard and has ample space for mounting various optics or sights. The flattop upper receiver’s Picatinny rail is marked with numbered slots.

Both the upper and lower receivers are manufactured from forged 7075 -T6 aluminum, which is the standard for ARs. Both are also hardcoat anodized in black. The lower receiver has typical AR controls in the right places, but instead of a standard safety lever, my test gun was equipped with a Star safety lever. An ambidextrous safety is an option, as is an ambidextrous magazine release. The magazine well is nicely beveled to encourage exceptionally fast reloads, and one 20-round AR magazine is provided.

R3 UpGrades
The test gun came with a Hogue grip that has finger grooves and is made of rubber for slip resistance. Some people will love this grip, and some will hate it, complaining that they don’t like the grooves. But if it fits your hand, it’ll help you get the same grip on the gun by feel every time you pick it up. Other grips are offered as options and are available in colors like tan, green and pink.

The triggerguard is RRA’s Winter guard, which is bowed at the bottom and allows a lot of room for a gloved finger. The trigger, an RRA Two Stage Match trigger, is pretty nice, and on my test sample, it broke cleanly at just less than 5 pounds after a short amount of take-up. There was virtually no overtravel, and the reset was positive. That makes for faster follow-up shots as well as accuracy on longer precision shots. A handsome chromed trigger is available.

Inside the upper receiver is the critical bolt carrier group, which can be had in a chrome or Parkerized finish like the one received for testing. The interior of the carrier and the inside of the gas key were chromed, and the gas key was properly staked to keep the screws tight. The extractor had a black rubber insert for added grip on the rim of spent casings. Not much is ever said about bolt forward assists anymore, but this gun has one just like most ARs. My sample R3 Competition came with a standard AR-style charging handle, but options include a Badger Tactical Latch, an RRA Ambi, the Gas Buster with Big Latch or the excellent Bravo Company Gunfighter with small, medium or large latches. Larger latches are good for speed, especially when clearing malfunctions.

The receiver extension, or buffer tube, is of the larger-diameter commercial variety. It is important to know this in case the owner wants to replace the buttstock, because a buttstock designed for a mil-spec tube will not fit. The castle nut was not staked—in case that is an important feature to you—but was probably secured with thread-locker to keep it in place. That is an acceptable practice, but makes it more difficult to remove the tube if it’s ever necessary.

RRA offers two buttstock options for the R3 Competition. My test gun came with RRA’s Operator CAR stock installed, which is adjustable to six length-of-pull positions. The other stock option is RRA’s fixed Operator A2. The CAR stock has a rubber buttpad that slides down to reveal two storage compartments for batteries or other small items. It is a comfortable stock that provides a wide surface for a good cheekweld. The stock also has two quick-detachable (QD) swivel sockets for slings if you want to put a sling on the gun. You will need to get an aftermarket swivel to attach to the front of the gun, though.

Range Results
I took the RRA R3 Competition to the range to test its accuracy and ease of handling. For accuracy, I installed a Leupold 1.5-5x20mm Mark 4 MR/T scope in an excellent LaRue Tactical SPR-1.5 quick-detachable mount. The mount permits removing the optic and reattaching it without losing zero. For tactical drills, I used an EOTech XPS-3 holographic sight with a reticle consisting of a 1-MOA red dot within a 65-MOA circle because of its lightning-fast target acquisition features. No malfunctions were experienced during the entire test period.

The muzzle brake proved to be very effective and reduced felt recoil and muzzle rise considerably. And because of the fluted barrel and well-ventilated handguard, the barrel did not heat nearly as fast as a conventional barrel with a less-well-ventilated handguard would. This no doubt contributed to the good accuracy that the gun displayed off the bench. With all of the loads tested, the average group size fell into the range of 0.5 to 1.75 inches at 100 yards. That’s pretty good for an out-of-the-box AR rifle, and it’s in line with the 0.75-MOA accuracy that Rock River advertises.

Rock River Arms’ R3 Competition seems to deliver the things it was built for. The 3-Gun competitor who owns it will have a gun that is accurate for those long-range shots and is fast to transition from target to target on those stages with multiple targets at closer range. Just add sights and any other accessories you might need, and this competition rifle is ready to win matches. For more information, visit rockriverarms.com or call 866-980-7625. 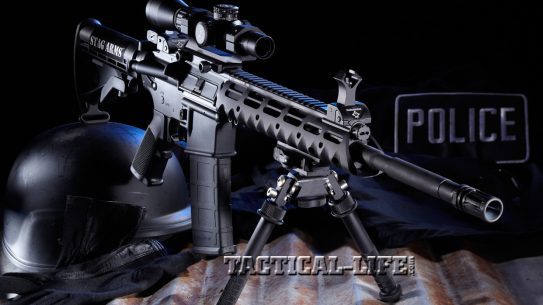