by Fred Demara
in Uncategorized
0

The Korean Version
The American program for the OICW was envisioned not just as a platform for new technology, but as part of a new weapons system that included replacement for the proven but admittedly improvable AR platform. This conceptual basis may have contributed to the OICW being shelved, as the time was not right for the introduction of a whole new weapons system.

The rifle we issued at the time was deemed sufficient for present needs, and the technology for the OICW airburst grenade component was not yet ready for primetime. Even in this high-tech era, the level of technology and precision required to do this is a quantum leap ahead of earlier concepts. Ultimately, the American military has chosen to abandon pairing an AR with a “smart” grenade launcher—instead testing the standalone XM25 airburst grenade launcher, built by ATK, which has already won several contracts and seen battle in Iraq and Afghanistan. 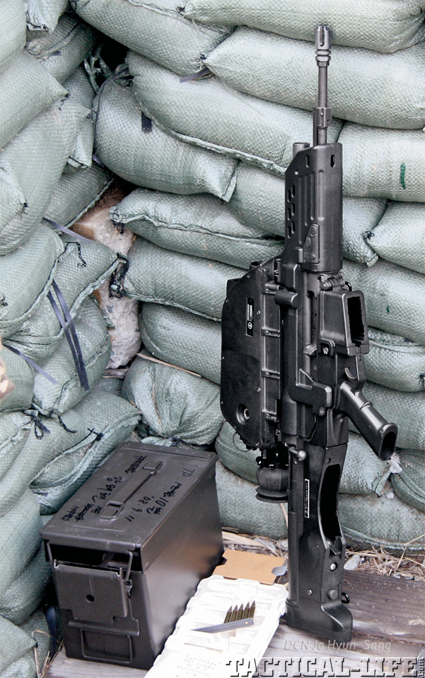 The ArmaLite DNA in Korean rifles can be seen here in the 5.56x45mm component of the K11.

The South Korean military-industrial establishment, on the other hand, was not encumbered with the “clean slate” paradigm, and it appears that by taking a different route they may have found the Holy Grail, a gun that can fire conventional bullets and calculated airburst grenades. Like the XM25, they proceeded to develop this in a platform that is suitable for incorporation in fairly conventional small arms. Their success may in large part be attributable to this focused, modular approach, and as this is written, ROK forces are fielding the K11 OICW with the troops they have contributed to the war in Afghanistan.

A slightly longer projectile, still in 20mm, gives K167 HEAB rounds lethal effect on targets behind cover. These air-bursting rounds are launched at about 623 FPS for an effective range of 546 yards.