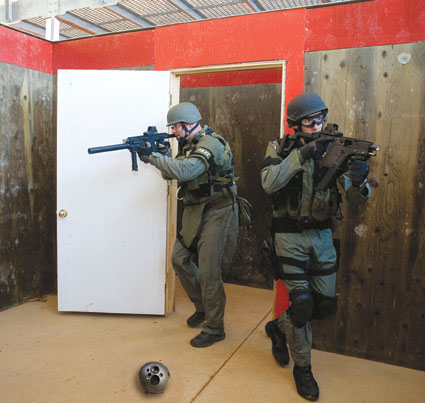 For an operator about to charge into harm’s way, the unknown threat can pose the greatest danger, as it is the threat for which he is not prepared. An operator can train for every imaginable contingency—but knowing in advance which contingency he faces can cut his reaction time by a crucial margin and represent survival. Previous options for real-time intelligence have been very limited. 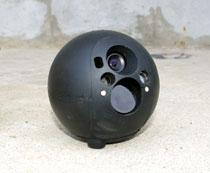 Remington Technologies Division, the venerable arms company’s own “Skunk Works” that takes a different tack from the rest of the company, has come up with an answer. They now bring us the Eye Ball R1.

Tossable Eyes & Ears
The size and shape of a bowling ball, the Eye Ball R1 is a mobile surveillance unit that allows operators to scout areas and rooms without having to physically enter. This odd-looking, eccentrically-named product will save lives in the LE and military communities.

Remington’s Mike Haugen, explained the role for which the R1 was developed as, “addressing the issue of the uncertainty of urban combat; more specifically the ‘unknown.’”  The concept of the R1 was developed in Israel through direct talks with operators and military and LE organizations. With their input, the Eye Ball R1 was developed. The idea was to provide the operating element with the ability to establish visibility in unsecured areas without endangering personnel.

Aside from its singular uniqueness within the battery of Remington products, the Eye Ball R1 is also unique on the market. Haugen explained, “There are other camera systems, but not anything that is throwable.” This quality is what makes the R1 truly unique. Rather than the rigidity of a fixed unit or the extreme cost of a more conventional mobile robotic unit, the R1 offers a good balance of costs and flexibility through the fact that the armored “Eye Ball” units can be thrown or rolled.

The powered R1 unit, which can run for two hours on a single charge, houses an omni-directional camera that rotates a full 360 degrees on its flat base to capture video, from distances up to 25 yards and audio up to 5 yards away. In addition, the unit offers near-infrared illumination for up to 9 yards away.

It Launches After Landing
Key to the application of the R1, the Eye Ball unit is weighted to correct itself and sit on its base once it stops rolling. Once righted, the unit begins to rotate in a 360-degree circle at four rotations per minute, providing a full view of the surrounding area with its 55-degree horizontal and 41-degree vertical field of view.

The unit is controlled by the included PDU (personal display unit), which can receive transmitted information from the Eye Ball units that are up to 200 yards away. The PDU, which has an internal rechargeable battery and can run for 2½ hours on one charge in scanning mode and 24 hours on standby, is capable of communicating with both of the two included Eye Ball units. It features a 6.4-inch color screen and can control the rotation, direction and illumination mode of the Eye Ball units.

A complete R1 Eye Ball kit, which costs $4,800, comes in a Pelican 1500 case and includes: two Eye Ball R1 units, one training ball, one PDU, two chargers, cleaning kit, carrying case, and adapters to attach lowering wires and poles or spikes. A few handy optional accessories include a monopod and a ground spike.

When asked if the unit was difficult to develop, Haugen pointed out the electronics themselves were not that problematic—it was building a housing for the Eye Ball unit that could take all the abuse it would receive that was the hurdle.

Pitch Perfect
I had a chance to try out the R1 system and came away very impressed by the system. When tossed onto a solid surface, the heavy-duty Eye Ball made a solid thud. With a little practice, I was able to throw it with a good amount of accuracy, and the PDU allowed for easy and precise control of the unit.

When asked about the proper application of the unit, Haugen stated that, “the R1 is best used by a small unit conducting room-clearing operations. It is thrown down a hallway or into a room and activated and controlled by one team member while the rest provide security. Once the threat is identified or recognized, the team can act properly.” In fact, the R1 has been purchased by groups such as SOCOM, FBI units, the Department of Homeland Security and U.S. Marshals.

The R1 is making a name for itself in the tactical realm, with more and more operators learning about it and testing out its capabilities. An unnamed NCO recently back from Iraq evaluating the R1 came away very impressed. He stated that it was “probably better than 90 percent of the equipment I received while in-theater,” and stated that he wished he had it in Iraq. Another NCO also recently in Iraq pointed out that he could think of many different uses for the Eye Ball. “We could throw it into a room before entering, place it to act as a listening/observation post and as a surveillance tool to monitor enemy activity and positively identify known insurgents,” he pointed out. It could help to save lives, he stated.

New technology coupled with devices such as this R1, have endless applications in all branches of the military and LE. Policing danger zones with man-free gear, that provide real-time information, be it on local, state or federal levels, will save lives of operators. Period. Taking operators out of the the line of fire, with tools to provide safety for our them and communities, should be the number one priority for any department or agency. Visit remingtonle.com.