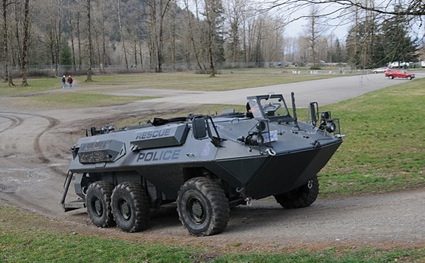 The RCMP in B.C. are rolling out their newest crime-fighting tools — two surplus tactical armored vehicles (TAVs) that were given to them by the Canadian Armed Forces.

The Cougars, as the military called them, were gathering dust and out of service, so the Canadian Forces decided to turn them over to the RCMP for free. The six-wheel vehicles will be stationed in the Vancouver-area for the emergency response team to use in dangerous situations.

When the vehicles last saw military service, they were armed with heavy guns and grenade launchers, but all the weapons were removed from the 32-year-old vehicles before they were handed over to the RCMP.

The RCMP did borrow armored personnel carriers from the military 15 years ago to help quell an armed standoff with native protesters at Gustafsen Lake, B.C.

Now, officers in B.C. say they need their own machines to protect against the growing firepower on the streets.

“Last year was a perfect example, within the Lower Mainland the gang violence, the amount of shootings, the type of firearms that were being utilized,” said Thiessen, referring to the spate of gang shootings and homicides that plagued the region.

The RCMP in B.C. are rolling out their newest crime-fighting tools — two surplus…