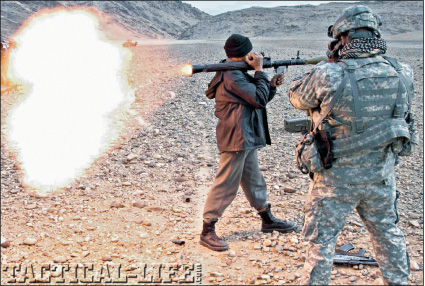 In the first decade of the 21st century, two divergent images of combatants have defined military conflict for the global media and the public. First is an American infantryman armed with an M4 carbine and decked out in digital camouflage, body armor, sophisticated sensors and communications gear, a truly modern warrior. Second is the insurgent, wearing street clothes, his faced wrapped in a keffiyeh to conceal his identity, carrying either an AK-47 or an RPG-7.

The contrast is clear—professional versus partisan, complex versus simple, high tech versus low tech. When these mismatched opponents face off, however, outcomes are not so predictable. The fact is, the AK-47 and the RPG, both simple and cheap, are among the most effective combat weapons available on the battlefield, with no prospect for replacement or significant improvement.

Few rifles have been more heavily documented than the AK-47, but the RPG is less understood despite its prominent use and interesting developmental history. Misconceptions about the RPG begin with the name of the weapon itself. The abbreviation actually is a transliteration from the Russian Cyrillic alphabet, РПГ, which is an abbreviation for реактивный противотанковый гранатомёт. For Cyrillicly challenged readers, the English transiteration is “reaktivniy protivotankoviy granatomyot,” and the literal translation is “reactive anti-tank launcher.” The English version of the Russian abbreviation became “rocket propelled grenade,” even though the Russian name is a more accurate description of the weapon because the weapon’s warhead is usually a high-explosive anti-tank (HEAT) shaped charge designed to penetrate and disable light armored vehicles.

Shaped Charges
Warheads include a large class of weapons based on the Munroe effect—first discovered nearly a century ago in World War I—that utilized the phenomenon that explosive material shaped concavely with respect to its contact point would direct the force of the explosion in the direction of the concave void. So-called shaped charges focus and accelerate explosive force into a small area to penetrate armor plate or other dense, thick materials. Weapon developers forgot about shaped charge technology until the 1930s, when Swiss engineer Henry Mohaupt began work on a man-portable anti-tank warhead. When World War II broke out in Europe, Mohaupt moved to the U.S. and helped develop the bazooka, a tube that launched a rocket-driven shaped-charge projectile capable of blowing treads off German Panzer tanks. Parallel developments in Germany, the U.K. and Russia led to similar weapons, the Panzerfaust and later Panzerschreck, PIAT and RPG-43, respectively, all of which accounted for long rosters of destroyed tanks. These weapons were unsophisticated, but they worked against most armored vehicles of the era.

Post-war technological developments brought steady improvements, although later weapons retained many design fundamentals from the 1940s. By far the most important such weapon is the Russian RPG-7, first introduced into Soviet service in 1961. Several similar weapons, such as the U.S. M72 Light Anti-tank Weapon (LAW), an outgrowth of the bazooka, have been in use for decades, and the Russians have produced at least 10 different models, but in sheer volume the RPG-7 outclasses all of them. The shoulder-mounted launcher has enjoyed broad distribution and use because it is cheap, reliable, intuitively simple to operate and requires no real training. Pick it up, look through the optical sight, and pull the trigger. More than 40 countries use it, and at least nine manufacture variants.

Limited, But Effective— And Ubiquitous
Hand held RPGs typically aren’t effective against main battle tanks because the size and weight of their shaped charges cannot overcome heavy armor and also fall victim to the explosive reactive armor used on many tanks to defeat shaped charges. However, the Russian RPG-29, an advanced model that resembles a bazooka and fires the PG-29V rocket with a tandem charge HEAT warhead, has damaged or destroyed modern heavy tanks including the Russian T-90 and the British Challenger 2 in such conflicts as the Chechen War and Iraq.

RPGs use a straightforward reusable launching device and a rocket containing any of several warhead types. Unlike the bazooka or the one-shot, disposable LAW that load rockets inside the tube from the rear, the RPG rocket mounts into the launcher’s front and extends outside. The launcher itself is nothing more than a 40-mm hollow tube, just under 16 pounds, that concentrates the rocket’s exhaust to increase its speed and keep it in stable initial flight. A wooden sleeve around the tube’s middle insulates the user from the heat of a rocket discharge and the end is flared to assist in blast shielding. The system incorporates a simple optical sight, with an iron backup sight. Infrared and night sights are available but rarely used. A common variant, the RPG-7D, known as the “paratrooper version,” breaks into two pieces for easier carrying.

Caveman Can Operate
To load the weapon, the RPG shooter lines up the rocket with the trigger mechanism so that the trigger will detonate a primer and set off a gunpowder booster charge to propel the rocket from the launcher. The rocket’s quick acceleration activates a piezoelectric fuse that ignites a squib of nitroglycerin, which in turn lights the rocket’s sustainer motor for its flight. The motor ignites about 10 meters in front of the launcher, and the rocket moves out at almost 300 meters per second. Standing close behind the RPG’s exhaust is not a good idea unless getting burned is your goal.

The rocket itself contains a conical warhead, a cylindrical motor mount, and a cardboard booster charge tube that burns away to leave a stabilizing rod with retractable fins that spin the rocket to steady it during flight. Depending on warhead type, rockets weigh between four and 10 pounds. Typical loads include the PG-7V, a single-stage HEAT round; the more powerful PG-7L HEAT; the PG-7R tandem HEAT for use against explosive reactive armor; the OG-7V high-explosive fragmentation anti-personnel round; and the TBG-7V thermobaric anti-personnel and urban warfare incendiary round. Other specialized rounds include white phosphorus, tear gas, smoke and illumination.

The RPG is completely unguided, so its accurate range is limited. It is guaranteed to hit its intended target at 50 meters, and loses some accuracy with a target at 100 meters. Beyond that range, accuracy drops quickly. At 200 meters, there’s an even chance the warhead will not hit its aim point. Rockets can, however, fly a bombardment range of more than 900 meters for indirect fire, subject to a 4.5-second self-destruct timer in the warhead. Once fired, the launcher can be reloaded, but it’s unlikely the operator will take the time to insert a second shot since rockets produce a clearly visible smoke trail, a convenient marker for counter-battery fire.

RPGs have seen continuous use since the Vietnam War and have appeared in virtually every Third World insurgency, and bigger wars as well, since then. Terrorists such as Carlos the Jackal and terrorist organizations ranging from the Irish Republican Army to Fatah and Hezbollah have relied heavily on the weapon for every conceivable kind of attack.

Deadly Up Close
Optimally effective use is at close range, usually with multiple weapons. Firing position concealment is vital because of the smoke trail, and operators must move out quickly once they shoot to avoid return fire. Anti-personnel warheads are effective against troop formations in the open, and a skilled shooter can use the fuse timer to achieve an airburst over a group of people. Well-aimed fusillades also can disable tanks, although RPGs are not powerful enough to stop most main battle tanks. The real bread-and-butter mission for RPG-7s, however, has been attacks against convoys of lightly armed or armored vehicles. By disabling lead and trailing trucks, attackers can immobilize convoys, enabling infantry to mop up troops trapped on the ground. Afghan partisans used this tactic repeatedly against Russian ground forces during the Soviets’ unsuccessful attempt to control their neighboring country, helping to increase casualty rolls sufficiently to encourage the Russian Army’s decision to quit while they still had forces to withdraw. RPGs are not shoulder launched anti-air missiles such as the Stinger or SA-7 Grail, but they can be lethal against helicopters in low flight or hover. Both rotorcraft brought down over Mogadishu, Somalia, in the ‘Black Hawk Down’ incident took hits from RPG-7 that detonated in the passenger cabin or near engines.

Although RPGs are limited in many respects, these simple weapons are still more than nuisances. They have maimed and killed many victims who rely on far more sophisticated capabilities, and they have an enviable record of effectiveness that in the case of RPG-7s is approaching half a century. Future improvements may include weight reduction, improved accuracy and quick-firing multiple-round capacity. Most of these technology insertions are inexpensive, although more accurate aiming and tracking systems, including laser beam-riding capability, internal guidance control or even a GPS-based course correction device, could increase RPG costs by orders of magnitude.

Even without such upgrades, however, it is certain that RPGs will remain a weapon of choice for terrorists and insurgents who can bring little more to the fight than shoestring weapons and a healthy measure of misguided fanaticism. 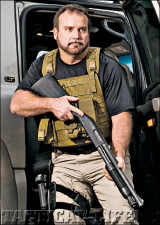 In the first decade of the 21st century, two divergent images of combatants have…