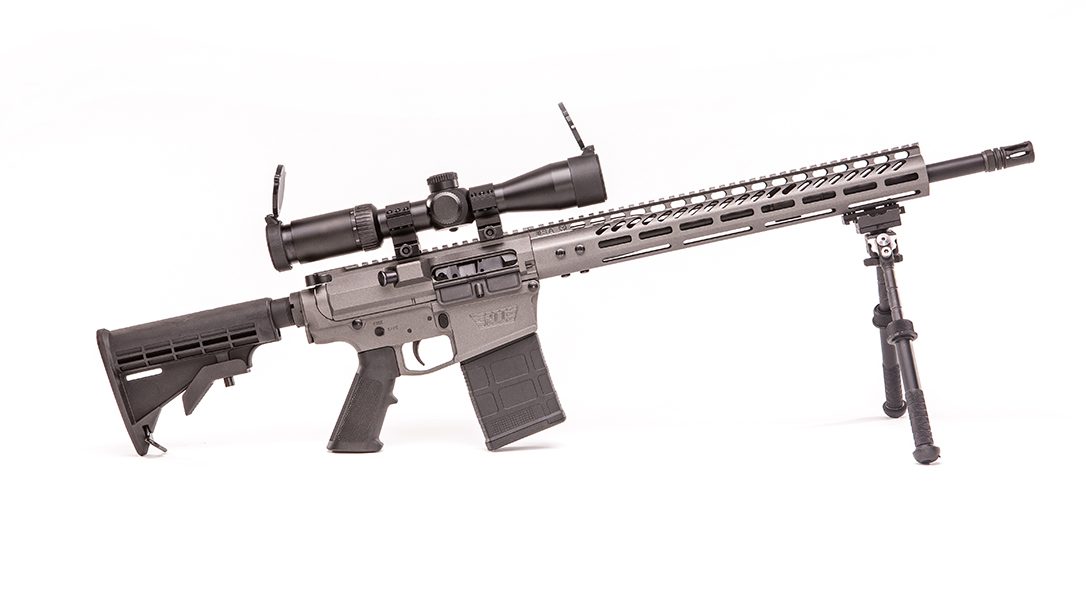 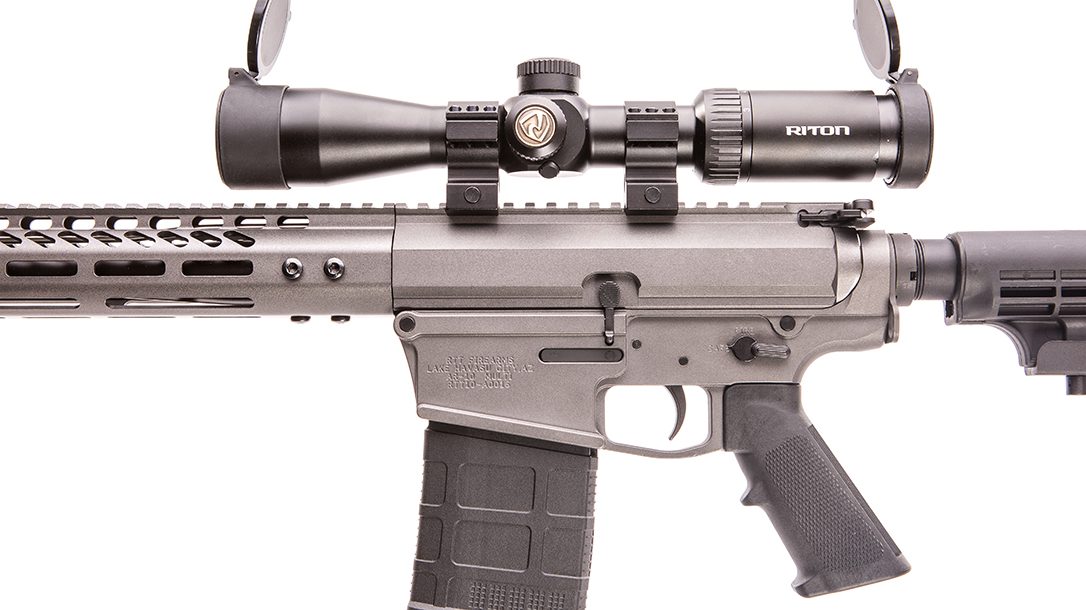 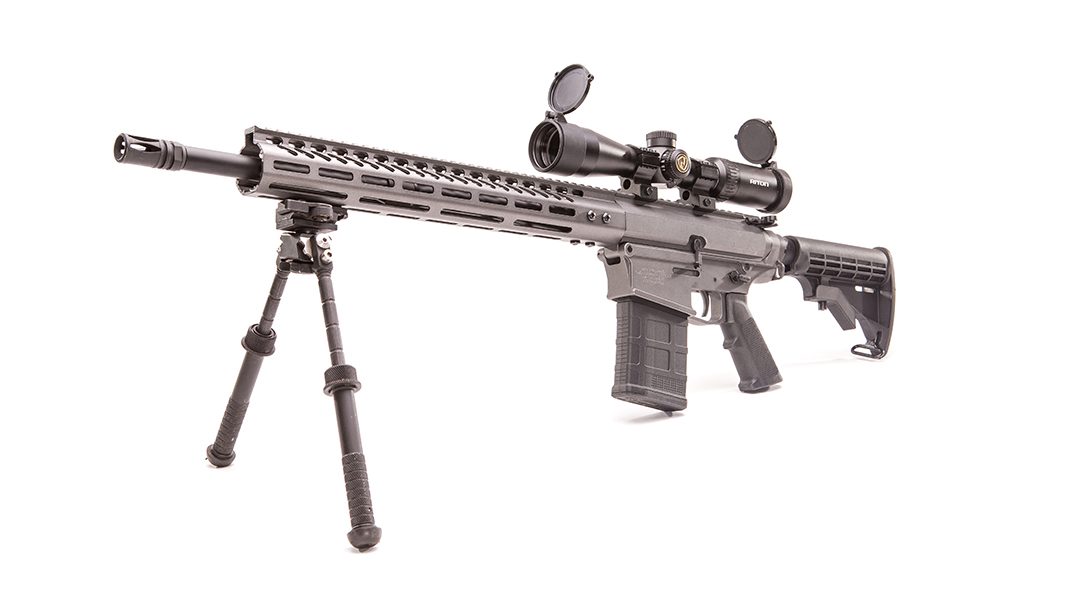 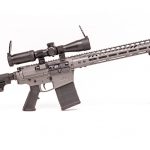 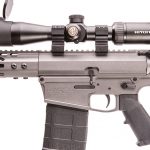 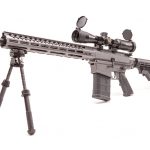 It’s like an insatiable desire. You get behind a rifle and press off a round only to hear it hit dead-center on your steel target. You then send a few more rounds onto the now grey splash of bullet impacts. Then you decide to move a little farther back. Same results—the steel rings out again. Rinse and repeat, and before long you’re not only testing just how far you can get hits, but even your optic’s capabilities. The RTT-10 Patrol captures all that is long-range shooting. 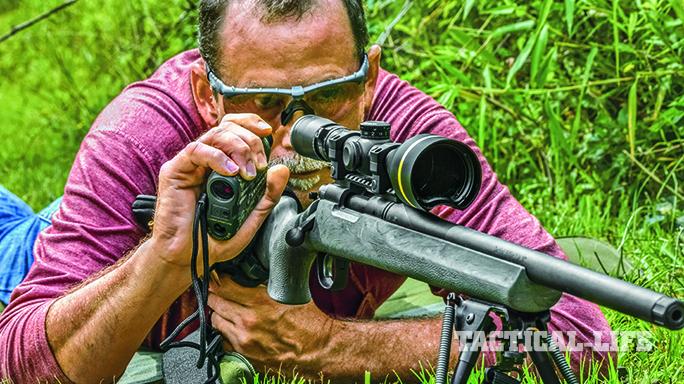 While the firearms industry as a whole has seen unprecedented growth, the popularity of long-range shooting has grown at an even faster pace. Once the realm of ballistic nerds, “long range” has spawned things such as the Precision Rifle Series (PRS), and there is now even a section of the competition dedicated to gas-operated guns. This speaks volumes about the AR platform and its popularity. While some of the rigs can reach astronomical costs, there is a company in Arizona that strives to merge quality with price. Say hello to RTT Firearms.

RTT is a fairly young company with great vision. It offers several AR-platform rifles in .308 Winchester/7.62mm NATO, but I recently got to run the company’s RTT-10 Patrol. I have long been a fan of precision ARs because they can be run very fast and have familiar controls. The challenge has always been to build one that is both reliable and seriously accurate. But RTT has accomplished just that with this gun.

The rifle begins with upper and lower receivers crafted from a billet of 7075-T6 aluminum. The 18-inch, 416R stainless steel barrel comes from Faxon Firearms. It features button rifling with a 1-in-10-inch twist rate. The muzzle sports 5/8×24-tpi threading for brakes and suppressors, and RTT includes the easily recognizable A2 flash suppressor.

The direct impingement operating system uses a low-profile gas block and rifle-length gas tube. Surrounding all of this is a 15-inch, free-floating, M-LOK handguard made from a billet of 6061-T6 aluminum and installed with a steel barrel nut. Within the upper, the bolt carrier group includes a magnetic-particle-inspected (MPI) bolt with double ejectors.

The lower has an integral triggerguard and is machined for standard DPMS .308 components and magazines. The rear of the lower also features RTT’s tuned and polished buffer and spring. To help keep costs down for shooters, the gun is finished out in mil-spec furniture and a standard 4.8-pound duty trigger. While some may question this, I find it to be a pretty solid move. More often than not, shooters will customize their guns to fit their specific needs or wants. Unless the “custom” gun you buy off the shelf truly fits all of your needs, you will be pulling parts off and replacing them. RTT has chosen to save the customer money by not adding expensive parts that will eventually be pulled off the gun.

Finally, for our testing purposes, I installed a 3-9x40mm Riton RT-S Mod 3 scope in its provided rings. This quality but budget-minded scope would be a great partner for the range evaluation.

While I can admire the company for including base-model furniture, I was also consigned to using said furniture during our tests. I am by no means a gear snob, but the standard collapsible stock was less than optimal. But, after some adjustments and the installation of a small Picatinny mount for a bipod, we were ready to roll.

Like the base-model hardware, the duty trigger wasn’t what you would expect on a precision rifle. I will say, however, that it was not as bad as some would be led to believe. After a short break-in period that allowed me to get acclimated to the gun, I had a very good feel of the trigger. And let me just say that I am a man of two worlds when it comes to rifle shooting. While I have a long-standing love affair with my well-worn and tuned bolt rifle, the semi-automatic RTT-10 Patrol offers a very fast-shooting platform.

One of the biggest problems I have seen, especially with newer shooters, on bolt guns is them coming “off the gun.” This is when a shooter physically raises their head up and surrenders their cheekweld in order to manipulate the bolt. While it can obviously be overcome with practice and training, the AR platform eliminates this from the beginning. Spending time on this rifle was a reminder of just why the U.S. Army started scrounging around for 7.62mm semi-autos they could use for precision-centric applications in Afghanistan.

The official documentation of performance with this rifle is what I have come to expect from RTT. The gun ran well with a spectrum of ammunition. The gun I received was brand new, thus I would expect its overall accuracy to improve as the barrel gets broken in a little more. While I had some great ammo with me, Hornady’s 168-grain ELD Match rounds printed the smallest group, which measured just 0.75 inches.

Of course, while the RTT-10 Patrol produced very respectable groups, I was more interested in the gun’s ability to allow me to engage multiple targets at speed. And that I did. I had reactive steel targets placed at ranges from 50 to 800 yards, and I ran the entire circuit without a miss. Yes, I knew the ranges of each target, but I have no problem with that. My goal wasn’t to simulate a qualification course with an unknown-distance range at a sniper school. In that arena, I would put this gun into the “well-qualified” category for law enforcement use. I train law enforcement officers across the country, and the one common theme in almost every jurisdiction is budget. This gun gives lawmen an opportunity to secure a great base weapon and then build from there.

While this rifle has obviously designated marksman applications written all over it, it could also easily be a hunting rifle. The ability to put a fast second shot on a now-running deer is crucial, and the RTT-10 Patrol is a capable tool. I found the gun to be comfortable to shoot with no obvious harsh edges. The A2-style flash suppressor did a decent job of managing muzzle energy, but a brake or suppressor would calm this rifle down in a hurry. But the gun is hefty, so even with its minimalist muzzle device, it was easy to get on target.

Like I said, this is a pretty hefty gun by design. When I transitioned from bench testing to kneeling and off-hand work, my lack of time on the gun began to show. While my minute-of-angle performance could not be duplicated while kneeling, the gun was still 100-percent “minute of man” accurate. All of my steel targets—half-sized IDPA silhouettes—were ringing like mad. The gun was still fast on multiple targets, if not even faster. Overall, I enjoyed shooting the RTT-10 Patrol and would consider it a winner.

I alluded to the price aspect of this gun earlier, but it is worth revisiting briefly. Rare is the day that I see a shooter in any rifle class I teach with a truly “stock” gun. There is always a tweak here or a new part there. The two things I see changed the most are the trigger and the buttstock. It is like buying cable television. You get a package and immediately change things by buying more.

RTT has done a great job creating a solid rifle with “good bones” on which you can build a spectacular shooter. As I look at many of the guns in my safe with new stocks, different triggers and other modifications, I wish the entire firearms industry would take a lesson from this gun. The RTT-10 Patrol is a solid entry-level precision rifle that is worth a good look. For more information, visit rttfirearms.com. 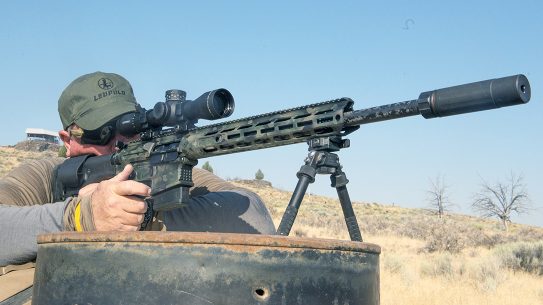 With upgraded features, the rugged Leupold Mark 5HD series of riflescopes is built to...