0
SHARES
1
VIEWS
Share on FacebookShare on Twitter
Assembling the rifle is easy as 1, 2, 3: Insert the barrel into the receiver, twist both halves downward until they line up, and make sure you feel the “click” as they lock together”

In 1942, the U.S. military adopted the .30-caliber M1 Carbine to provide firepower for rear duty and support soldiers. The rifle was easier to shoot than the 1911 pistol and was smaller, lighter, and easier to handle inside vehicles, buildings, and other confined spaces than the full-sized M1 Garand battle rifle. Despite its rather anemic .30-caliber, 110-grain full metal jacket bullet, the 5.5-pound, 36-inch-long M1 Carbine proved to be surprisingly popular and reliable. It passed the Ordnance Department’s endurance test in 1941 by firing 1,000 rounds with only one stoppage. That began a 30-year service life in the U.S. military, and the carbine has also been pressed into service by many armies around the world. 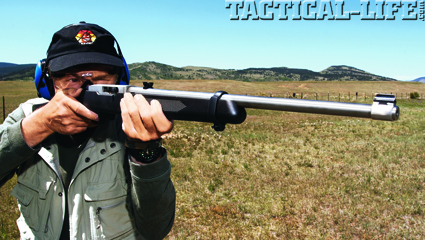 Good things do come in small packages! Ruger’s takedown carries the 10/22 series’ quality and heritage in a package that can be taken down and stowed anywhere

After World War II, surplus M1s were purchased by veterans and civilians for personal use. Many M1s also saw work as short-range deer rifles. Nobody could possibly have predicted that almost two decades after the M1 Carbine was issued to GIs, an American firearms genius named Bill Ruger would take many of the carbine’s features, such as its operating handle, compact design, and short-stroke gas system, and incorporate them into the Ruger company’s first rifle, a gas-operated, short-stroke piston gun with a tubular magazine and chambered for the more powerful .44 Magnum cartridge. Originally named the Deerstalker, the gun was soon renamed the .44 Magnum Carbine. The Ruger carbine didn’t share the popularity of the old 30-caliber M1, partly due to the high cost of .44 Magnum ammunition. Ruger saw a way to provide cheap shooting for 44 Magnum owners, and in 1964 produced a carbine that externally was almost identical in operation to the .44 but was chambered for the more economical .22 Long Rifle cartridge and had a detachable 10-round rotary magazine, hence the “10/22” designation. An advertisement in 1965 advised hunters that the two guns were “identical in size, balance and style and nearly the same in weight.” They could practice with the 10/22 carbine and then hunt brush-country deer with the .44 Magnum. 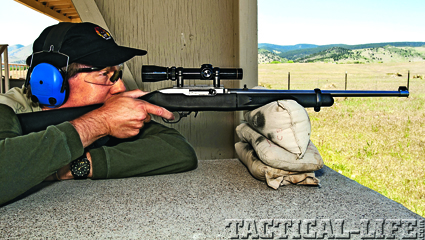 For pairing optics with the Takedown, choose a short, low-power scope that barely extends past the end of the receiver. That way it’ll still fit in the carry case.

Those early .22 carbines set a standard for accuracy and reliability that continues to this day. The Ruger 10/22 utilizes a blowback design that slightly retards the cycling of the bolt in order to ensure reliable feeding of cartridges from the magazine. This is one feature that makes the combination of rifle and the less-powerful .22 LR rimfire cartridge such a reliable system.