1
SHARES
35
VIEWS
Share on FacebookShare on Twitter
The svelte little Ruger 77/357 handled well in the field, with or without a scope. For close-range work on medium-sized game, this is a great bolt-action hunting rifle. Steve Woods Photo

I don’t know who at Ruger come up with the 77/357 idea, but as far as I’m concerned, they need a raise. When I heard about this rifle, I was genuinely excited, which is something that happens less and less often when it comes to new bolt-action rifles anymore.

The Ruger 77/357 is built on the same investment-cast action that Ruger uses for their 77/44 (.44 Magnum) rifle. This action is also used for the 17 HMR, .22 LR, .22 Magnum and the .22 Hornet cartridges. These cartridges work and are safe in this smaller-dimensioned action because they operate at pressures less than 46,000 psi. This is relatively mild when compared to modern cartridges like the .300 WSM, which has an operating pressure of 65,000 psi. 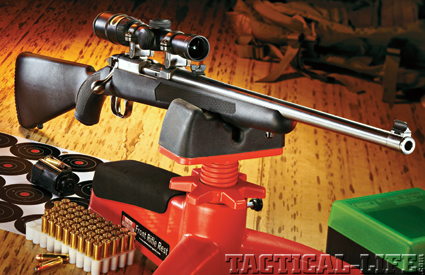 Four different factory loads were tested in the Ruger, and it functioned flawlessly with all .38 Special and .357 Magnum ammo. Steve Woods Photos

This smaller action ultimately results in a rifle that’s lighter. For example, even a compact Ruger 77 in .223 Remington—which has a barrel 2 inches shorter—weighs almost a full pound more than a Ruger 77/357.

Mark II Roots
The Ruger 77/357’s action is mostly configured like the famous Ruger Mark II action. It has the three-position safety just like the Ruger Hawkeye. In the rear position, the rifle is safe and the bolt is locked down. In the middle position, the bolt can be operated but the firing pin is blocked. The forward position is fire. Being able to lock the bolt is a great feature; it keeps the bolt from inadvertently being pried open while you are walking through brush. 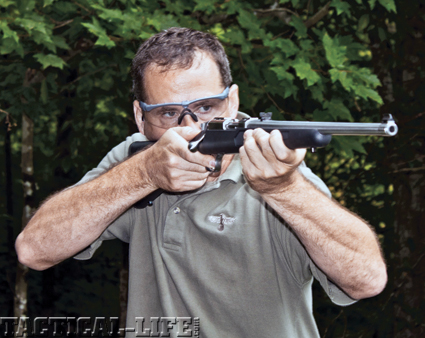 Not only is the Ruger 77/357 rifle for deer, bear, hogs or other medium-sized game at close range, but it’s also fun to shoot and practice with.