by Chris Christian
in Guns, Handguns
0

Little guns seldom make big news, but the Ruger LCP .380 ACP changed the rules. Many wondered what direction Ruger would move after they entered the polymer-frame handgun arena with their 2007 introduction of the striker-fired SR9 9mm. That question was answered during 2008 with the introduction of the ultra-compact LCP (Light Compact Pistol) .380 ACP.  A true “watch fob” pistol that can slip comfortably into even the tightest pocket, yet is
chambered for the .380 ACP, it was an instant hit. 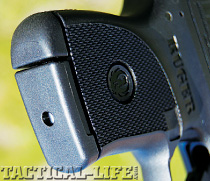 The LCP .380 ACP is a recoil-operated, locked breech semi-auto, using a tilting barrel (no barrel bushing) design. Built on a glass-filled nylon composite frame, it features an aluminum sub-frame inner grip frame, hardened steel slide and a 2.75-inch steel barrel. The resulting pistol weighs in at 9.4 ounces empty, measures 5.16 inches in overall length, 3.6 inches in height, and is a scant 0.82 of an inch wide.

Magazine capacity is six (one magazine supplied, with additional magazines available) and is of a drop-free design. The magazine release button is located in the approved American-style, left side behind and below the triggerguard, and is quick and positive to use.

The slide does not lock back on an empty magazine after the last round, but it can be manually locked back via a slide lock lever on the upper left side. If the slide is locked back and a loaded magazine inserted, the slide lock lever can be used to send the slide forward and chamber a round. But retracting the slide slightly to the rear and releasing it is a quicker and more positive way to charge the pistol from slide lock. 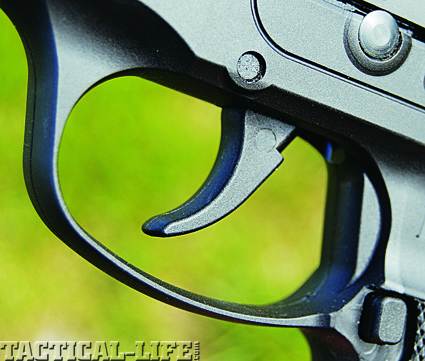 Trigger is smooth faced with just a slight amount of take-up.

The trigger assembly is striker-fired with a double-action-only (DAO) trigger that has about 0.25 of an inch of take-up slack and then transitions to a 0.75 of an inch pull of about 8 pounds. Although the trigger is DAO, there is no repeat strike capability. The slide must be cycled about 1.25 inches to the rear to reset the striker.

The LCP has no manual safeties but there are two safety indicators. If the striker is not cocked the hammer will not be visible in its rear slide recess. Cock the pistol and the hammer appears in the upper portion of the recess. It’s a quick way to check if the pistol is cocked. A slight cut in the rear of the chamber on the right side allows a visual determination of a round in the chamber.

Sights are fixed and consist of a small rear notch and front blade milled into the slide. Minuscule is an excellent way to describe the sights.

The .380 ACP has never been considered a serious self-defense cartridge, however its ability to function in extremely compact guns has made it a favorite back-up firearm for those who favor a semi-auto over a snub-nosed revolver. Some feel that the seven to nine rounds carried in a compact .380 are a better bet than the five in a snubby, while the ability to reload more quickly is a definite plus. Ballistically, the .380 ACP ranks behind a quality .38 Special +P in terms of penetration and expansion, but with modern JHP loads, there really isn’t a big difference.

Just how much penetration and expansion is required in a self-defense handgun load has been endlessly debated, and I will not rehash the arguments. Comprehensive tests conducted by the FBI have determined that a full-sized duty handgun should penetrate a minimum of 12 inches of properly prepared 10 percent ballistic gelatin, and can do so while penetrating such intervening objects as denim clothing, wallboard or even automobile glass. Expansion was not a test criterion, just penetration. The emphasis on this level of penetration was due to the fact that a primary duty handgun might have to become an offensive weapon and defeat a barricaded suspect.

When it came to criteria for a civilian self-defense shooter or an off-duty law enforcement officer, the penetration level was reduced to the 6- to 9-inch range. This reflects the fact that these encounters are normally at close range, face to face, and without intervening objects. If a load will achieve that level of penetration it is capable of reaching vital organs. If it does that and expands in the process, the effectiveness of the load becomes more dependent on bullet placement (accuracy) than on caliber. 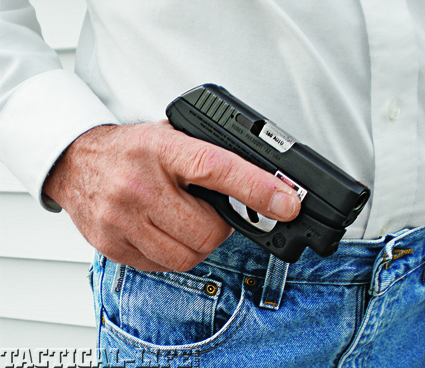 While drawing from a pocket holster can be problematic is not practiced, it is not difficult to accomplish. Merely insert your hand like you would anytime you are retrieving something from your pocket, wrap the three lower fingers around the gun’s front strap and withdraw. Keeping the thumb on the back of the slide will help clear the way.

On hand for this test were some of the most proven .380 ACP self-defense loads and included the Remington 102-grain Golden Saber, Federal 90-grain Hydra-Shok, Hornady Custom 90-grain XTP/JHP, Winchester Ranger 95-grain STX, and the 90-grain Speer Gold Dot. My research failed to reveal any valid ballistic gelatin tests on these loads from the 2.75-inch barrel of the LCP, so I conducted my own, using water instead of gel.

Gel is preferred, but researchers note that compartmented water is also valid. In my case, living in hot and humid Florida, gel is not an option, as it needs to be used in a temperature controlled laboratory environment. If the gel block temperature varies by more than a few degrees from the scientifically accepted 39 degrees, the results are skewed and you are now comparing apples to oranges.

I’ve been using water for over 20 years and have constructed a wooden trough precisely sized to hold a line of water-filled one-gallon Ziploc bags. The bags allow a recovered bullet for weight and expansion measurements, as well as recovering any bullet fragments lost during penetration. A distance scale on the bottom of the trough measures penetration distance. 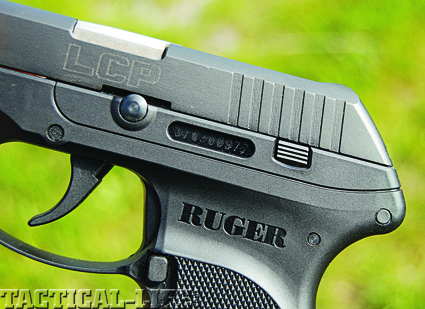 The slide lock lever can be used to manually lock the slide to the rear.

Water tests don’t match gel tests. Bullets penetrate further in water, and sometimes expand a bit more. But water test figures can be correlated to gel. Over the years I’ve been using this water trap I have been able to find laboratory gel test figures for many of the same loads, and at the same velocity from the same barrel lengths. If the water trap figures are divided by 2.25, they will normally be within + or – 10 percent of the gel figures, although expansion in water will sometimes be a bit greater.

All of the above .380 ACP loads easily met the 6- to 9-inch penetration criteria, with some showing impressive expansion in the process. Spitting seven of those out quickly should solve a lot of problems, and the LCP will not only spit them out quickly, but more importantly, accurately.

Range Time
Initial tests were conducted under the bright midday sun without the CTC Laserguard installed in order to get a feel for the basic gun. I also wanted to see if those tiny sights were in any way useful, and they surprised me. From 7 yards it was no trick to consistently bounce empty beverage cans across my backyard range.

Although the sights are small, they sit on a flat upper slide surface that does allow a decent look at them in good light. I also found the gun to be a very natural pointer in my hands and sight alignment was pretty quick. Recoil was a bit snappy, but the front and rear grip strap checkering did allow for good control even through I was only able to get two fingers on the short grip.

There were a few failures to feed during the first 30 rounds, and all were tip-up jams. There was no pattern to them. Some would occur on the second or third round, and others near the end of the magazine. Once a few magazines went through the gun, however, the failures to feed stopped and didn’t return. The remainder of the tests (about 200 rounds) was failure free.

The iron sights were surprisingly effective at closer ranges and 7-yard freestyle off-hand groups of 2 to 3 inches to point-of-aim were the rule rather than the exception. Moving back to the 10- to 15-yard ranges the sights lost their luster and groups opened, but solid center of mass hits were still easily achieved.

Installing the laser, I waited until the late afternoon shadows crossed the range and ran a few more boxes of ammo through the gun freestyle. The laser was definitely quicker on target at 7 yards, but did not noticeably shrink the group sizes. Moving back to 15 yards there was a major difference. Iron sight groups had stayed comfortably within the 1 Zone of an IDPA (International Defensive Pistol Association) target, but the laser allowed them to cluster nicely well inside the 8-inch chest 0 zone. Settling the gun onto a 7-yard sandbag rest and using the laser, showed the LCP is capable of surprisingly good accuracy.