When my former agency formed its SWAT Team in 1980, we really didn’t know a lot about tactical operations. Much of what we originally did know was taken from Army and Marine Corps field manuals as well as magazine articles on the topic. I look back now and can’t help but laugh, as our efforts were pretty unsophisticated. It was the addition of a Vietnam-era Green Beret (who was a Prosecutor’s Investigator) who volunteered to help us get on the right track that probably saved us.

Smartly, our team was one of the first to have a “Combat Doc” on board. In 1982, a local emergency room physician (who was a serious gun enthusiast) volunteered his time to the team and he was sworn in as a “provisional deputy” (he didn’t have the time to go through a complete basic police academy) with authority to act any time the team was on a call out. The trauma pack that he carried at the time was impressive, as he was prepared to perform surgery right there on the scene. A great comfort, let me tell you.

Our original weaponry was more simplistic, with service revolvers and cruiser-grade shotguns filling the need. Well, they didn’t fill it very well—but it is what we had. The original rifles that we purchased were Ruger Mini-14’s with flash suppressors and folding stocks. I can remember thinking the guns looked “tricked-out” for the time and we shot the crap out of them. They held up very well and were eventually “put out to pasture” as the team evolved and Heckler & Koch MP5’s were purchased for entry work with Steyr AUG’s for perimeter duties. 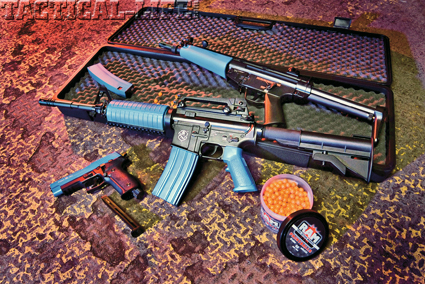