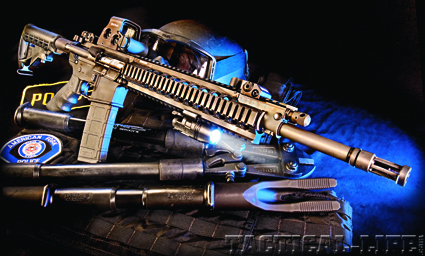 The Ruger SR-556 offers tactical rifle users an opportunity to own a top-end AR-pattern rifle employing a highly effective push rod/piston operating system, all with the quality and performance one would expect from this storied manufacturer.

Over the last year or so there have been many different piston-driven ARs offered — most of them are excellent rifles with advantages over the standard gas impingement rifle, especially if using a suppressor or running a shorter barrel. But those advantages often come at a price, as rifles purportedly designed for law enforcement are often just too expensive to justify the difference for most police officers and police departments.
Although I’m a strong proponent of shorter entry guns, admittedly most short-barreled 5.56mm rifles are just plain loud and can be uncomfortable to employ in close spaces when unsuppressed. Since that’s the world in which a SWAT cop lives, that can be a problem. Attach a suppressor to a short-barreled rifle and you are right back to 16 inches or so in length. What would really be nice is a 16-inch gun with a piston system at a reasonable price and it seems Ruger just may have done that, and done it well. 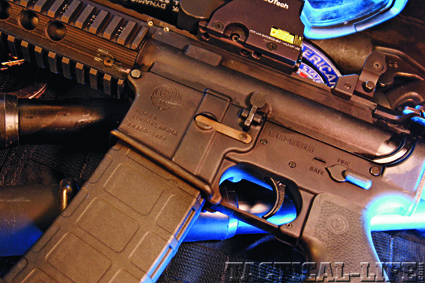 Configured similarly to any other AR, the SR-556’s operational controls are all where they are supposed to be — no need to retrain on this Ruger.

Ruger has long been known for two things in the gun industry — reliability and affordability. Their guns do not always have the gadgets or bobbles seen on other guns, but they work and often cost far less than the competition.

When the word came out that Ruger was making a piston-driven AR rifle, the SR-556, it was skepticism that first entered my mind. Although everyone and their best friend’s brother seems to be making an AR, it just did not seem to be something that went with the Ruger name. But what also came to mind was that if Ruger was going to make one, it will likely work and be priced so more people could afford them. Maybe there was hope for the average police officer looking for a piston-driven gun. What was really needed was a rifle that came with everything necessary to go to work for a police officer or SWAT guy, and with a retail price of $1,995, Ruger really puts them in reach for many that were not even near the ball park before.

Ruger seems to have addressed typical gripes about guns for officers or SWAT teams and this package comes with just about everything you need. The rifle is equipped with three Magpul PMags — not only are these fantastic magazines that have proven reliability, there are enough of them to go to work immediately. It has a nice six-position stock and a Hogue monogrip, the handguard is a quad rail design that covers a two-stage adjustable gas system and comes with three rail covers. It is mated very nicely to the receiver allowing for the use of tactical optics, while the bolt and rifle bore are chromed for reliability.

The SR-556 comes with a top end set of flip-up sights with the front sight being a complete ghost ring that allows for a “ghost in a ghost” sight picture. It is fast, accurate, and easy to pick up on the move. The entire package comes in a nylon case that holds all of it in one spot. It’s a bit less rigid than most tactical cases but works just fine since, contrary to popular belief, most SWAT officers field what they are assigned and seldom add much. The only thing really missing was a means to attach a sling to the front of the rifle. I certainly recognize that slings are often a personal choice, but in this case there is simply no way to attach a sling to the front. You can purchase attachments to make the sling work.