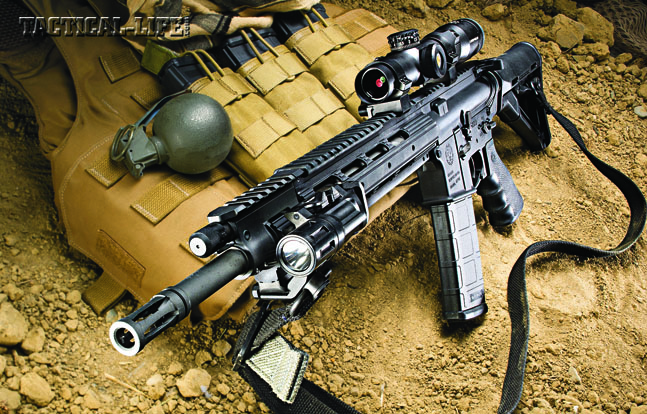 1 of 9
Ruger SR-556 Carbine | Gun Review 1
The Ruger SR-556 Carbine is a light, sleek 5.56mm that would be a perfect addition to any patrol unit or SWAT team. Its adjustable gas piston system helps it run reliably in adverse conditions. Shown with a Magpul CTR stock, Inforce WML and Leupold VX-R Patrol 1.25-4x20mm scope. 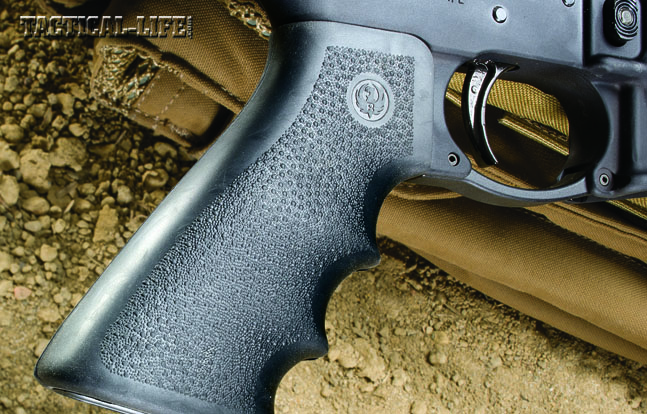 2 of 9
Ruger SR-556 Carbine | Gun Review 2
For a grip, Ruger chose to install a Hogue Monogrip, which is made of semi-soft rubber, features well-defined finger grooves and offers a solid, hand-filling hold. 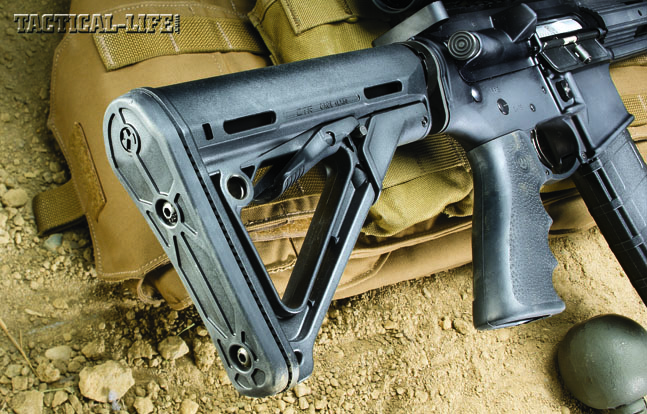 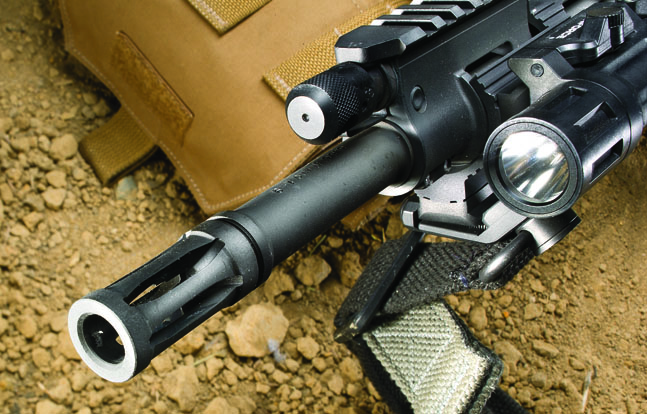 4 of 9
Ruger SR-556 Carbine | Gun Review 4
The flash suppressor is cut directly into the barrel to make it a legal 16.12-inch length, even though the rifled portion is only 14.5 inches in length. 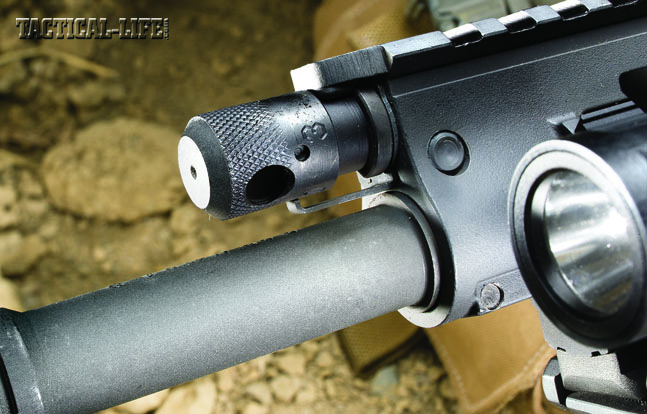 5 of 9
Ruger SR-556 Carbine | Gun Review 5
The four-position regulator above the barrel can be adjusted for optimum reliability and superior operating endurance, even when using a suppressor. 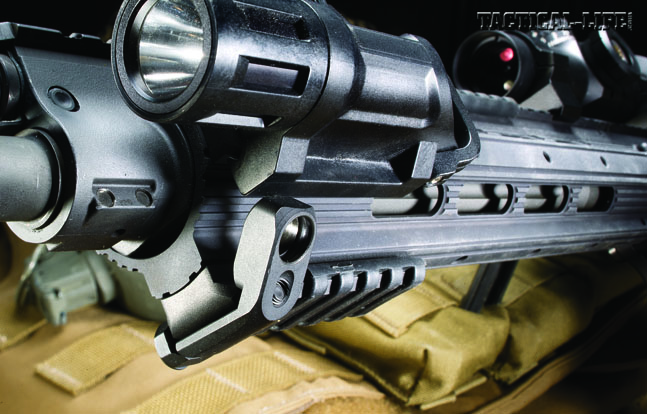 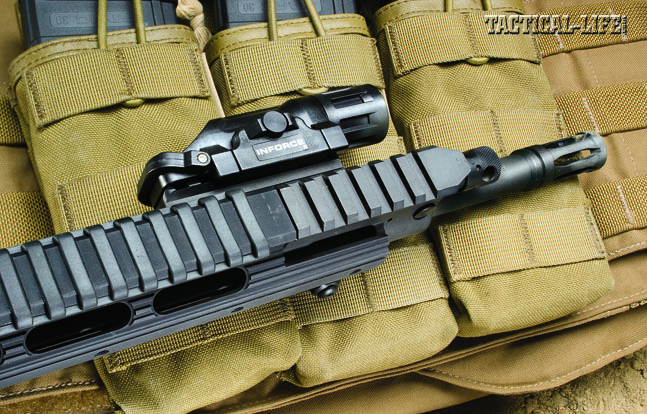 7 of 9
Ruger SR-556 Carbine | Gun Review 7
As with all SR-556 rifles, the byproducts of the gas system are vented out the bottom of the gas block, away from the bolt carrier, keeping the action clean and free from contaminants. 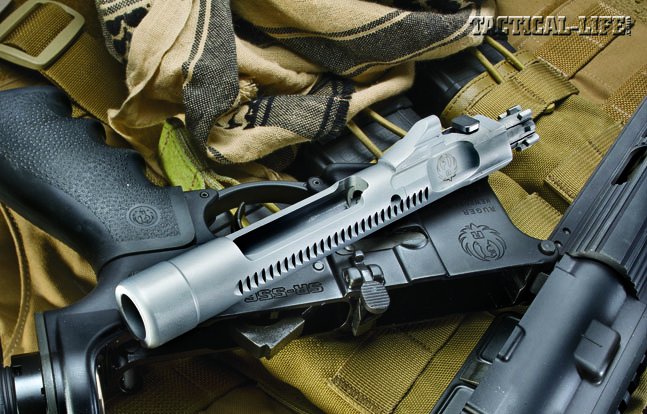 8 of 9
Ruger SR-556 Carbine | Gun Review 8
The Ruger SR-556’s bolt assembly is not only robust—it’s also chrome plated to reduce friction, increase its life and make it easier to clean. The two-stage piston supplies a smooth delivery stroke to the bolt carrier so as not to compound recoil. 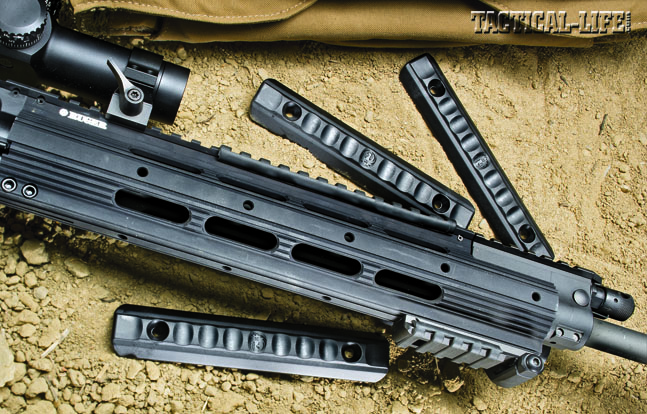 9 of 9
Ruger SR-556 Carbine | Gun Review 9
Ruger offers the SR-556 Carbine with either a quad-rail handguard or a sleek adaptable forend (shown) that comes with 3-inch rail sections. 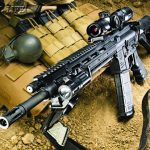 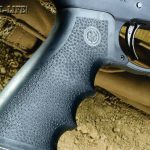 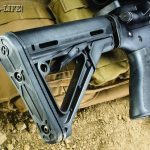 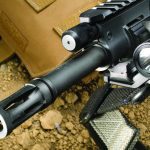 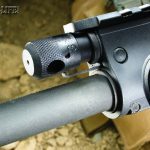 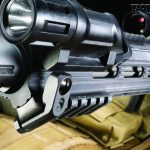 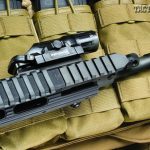 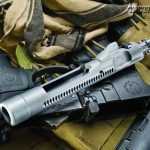 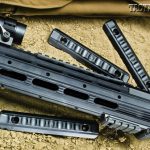 The immense interest in the AR-15 platform is unlikely to abate anytime soon. The number of manufacturers offering the gun is increasing as Americans continue to satisfy their appetite for the sleek, light, reliable rifle. Basically the same gun it was in the 1950s, the AR-15’s only major design change in today’s models is the gas piston operating system. At first the gas piston was a bit shaky because the rod tilted and broke bolt assemblies. But manufacturers have worked out the bugs and now offer reliably performing gas-piston guns.

Ruger entered the AR market relatively late but had done its homework beforehand and opted to go with a gas-piston gun, feeling this would be the AR of the 21st century—nothing I’ve seen has proven it wrong. Ruger now offers several different models ranging from high-end rifles with all the bells and whistles down to stripped, sleek, economy guns with just what you need and nothing you don’t. Since most operators want a compact and light carbine, I recently took an interest in Ruger’s short, 14.5-inch carbine, which is legal to own due to the built-in flash suppressor that brings the barrel to a legal 16.12 inches.

Gun Details
The Ruger SR-556 Carbine is a centerfire AR platform weapon with the same features of the original SR-556 but with a shorter barrel. In this case, the part of the barrel that is actually rifled is 14.5 inches in length, but the barrel’s overall length is a legal 16.12 inches due to an integral flash suppressor that is actually cut into the hammer-forged, chrome-lined barrel itself, making it fixed and non-removable. At just a shade over 7 pounds, the Model 5913 Ruger SR-556 Carbine (there is another model with a full-railed forend) is sleek, incorporating a thin, lightweight, adaptable handguard on which sections of rail can be placed for needed accessories, instead of having a forend with enough rails to open a railroad! The thin handguard also allows the operator to wrap his or her support hand around the forend to better “drive” the muzzle from one target to the next. The SR-556 Carbine comes from the factory with a set of heavy-duty, flip-up iron sights, but the receiver/barrel-length section of Picatinny rail just asks for an easy-to-see and -use optic.

The pistol grip supplied by Ruger is a rubber, finger-grooved Hogue Monogrip rather than the overly thin mil-spec grip of most ARs, which is usually one of the first things users replace with an aftermarket product. A six-position, telescoping buttstock and Magpul PMag are also part of the factory package, making it one of the best factory-equipped long guns available. As previously stated, the Ruger SR-556 Carbine features a gas piston system, but not one with the typical piston rod as found on other AR packages. Ruger uses a two-stage piston with an adjustable regulator, which provides a cleaner- and cooler-running carbine and thus a longer service life. The two-stage piston supplies a smooth delivery stroke to the chrome-lined bolt carrier so as not to compound recoil. The four-position regulator can be adjusted for optimum reliability and superior operating endurance, including with the use of suppressors.

Fully Dressed AR
As well dressed as the SR-556 Carbine comes from the factory, it was not quite what I would want to hit the streets with. First, the gun needed a top-of-the-line optic, and I needn’t look any further than Leupold. Since I viewed this gun for patrol or SWAT operations, I felt having an optic that would work in close quarters but also “reach out” and see what a suspect is holding in their hands would be the way to go. Leupold’s VX-R Patrol optic is a 1.25-4x20mm scope packed full of features. Its FireDot Special Purpose Reticle, once activated, illuminates a dot at the center of the crosshairs with bright, sharp definition while the rest of the reticle is not illuminated. This combination leads your eye naturally to the center aiming point and makes target acquisition quick, precise and simple regardless of the distance involved. Leupold’s Index Matched Lens System has nearly perfected superior light management by utilizing different coating materials for each lens surface in the riflescope, based on the lens’ index of refraction, placement and function, layering each coating to eliminate reflections and maximize light transmission. The result is unparalleled brightness and extremely sharp resolution across the entire visual plain. Leupold’s DiamondCoat on the exterior lenses gives the ultimate in abrasion resistance and light transmission. The result is a flawless sight picture over a career of hard use.

As for accessories, while I could go from manufacturer to manufacturer to get what I needed, I could also find one source for everything. Simplicity being key, I opted for the latter and contacted Bob Meszaros at Templar Custom Arms. Templar is a custom gunsmith service that not only combat-modifies polymer-frame pistols but also builds custom AR platforms from the ground up, including machining the upper and lower receivers! Templar offers AR-15s to customer specifications as well as a wide variety of accessories—it had exactly what I wanted. While the Ruger factory rear stock is usable, it is not optimal. So I had an adjustable Magpul CTR (Compact/Type Restricted) rear stock attached, a drop-in replacement buttstock using a mil-spec-sized receiver extension tube. The streamlined A-frame profile avoids snagging and shields the release latch to prevent accidental activation. The CTR also features a supplemental friction lock system, which minimizes excessive stock movement for enhanced weapon stability, and an ambidextrous QD sling mount, which will accept any push-button sling swivel. The CTR is sleek and large enough to offer a solid cheekweld. Truth is, there is no better buttstock on the market.

I also needed a charging handle with a better grip surface for fast, hard manipulation, the type that happens in conflict. Bravo Company’s BCMGunfighter charging handle with an extended latch features internal redesigns to direct manipulation force off of the roll pin and into the body of the charging handle. This superior design has a backstop built into the extended latch and charging handle to ensure it does not break at a critical moment. As the latch is opened up, its travel is limited by these flat surface backstops, and with this travel-limiting feature, the stress is taken off the roll pin and redirected into the entire body of the charging handle. The BCMGunfighter is offered with multiple sizes of side handles to meet the operator’s individual requirements for almost any mission.

A long gun needs also a white light on the forend to identify threats and keep the support hand available for shooting. For the last few months I have been using the Inforce WML with a momentary activation feature. This simple-to-use weapon light is designed just for those who prefer the single-mode function of a more traditional-type switch. The Inforce WML produces 200 lumens of white light for two hours, with a tight beam for close- to mid-range use and balanced peripheral light for identification of the surrounding area. The WML uses an angled activation button that facilitates operation without interference from wires or tape switches, a feature that I find to be quite appealing and easy to use. The integrated rail clamping system is compact, convenient and secure. And two distinct lockout systems are incorporated to avoid accidental discharges. My final addition was a sling, as I view a sling as the holster for a long gun. My favorite sling is the Larry Vickers–designed two-point Vickers Combat Applications Sling from Blue Force Gear. Being able to quickly transition from carrying a slung rifle to being combat ready smoothly is critical, and the patent-pending Quick Adjuster tab used on the VCAS has bridged the gap between the two primary uses of a weapon sling: transportation and fighting. The VCAS is simply one of the easiest-to-use two-point sling.

Shooting Impressions
Once the Ruger SR-556 Carbine was street ready, it was time to take it to the range to see what it would do. I collected a number of street-proven loads, my Shooting Chrony chronograph and some Wilderness Giles Bags and headed to the range. I use the Shooting Chrony and Giles bags for the same reason: They are both easy to transport, simple and very adaptable to the environment. I also took along my 25-year-old son, who has much better vision than I, which was nice to have, especially when shooting at 100 yards.

Traditional thought is that a 1-in-9-inch twist rate is not fast enough to stabilize the heavier 5.56mm bullets, but I have not found this to be the case, at least at 100 yards. While this level of accuracy may fall off as distance increases, I am looking at this gun as a law enforcement weapon, not for military use. Thus, 100 yards is a long shot, and as a general rule I find a heavier bullet superior in tissue and when hard-object penetration is required.

The remainder of the test involved fast shooting, as would be the case in combat. The first thing we did was shoot a full, 30-round PMag at 25 yards as fast as we could work the trigger. We were happy to discover we kept almost all of our rounds inside an 8-inch circle—pretty good shooting for an unfamiliar gun and trigger! Another fun drill is the 25-yard El Presidente while trying to maintain the 10-second par time of the 10-yard pistol drill. It took a few tries, but it was quite doable. In the end, we fired 500 rounds through the SR-556 Carbine without a single malfunction. While not the cheapest carbine on the market, it is certainly one of the most accurate and robust available. If you are looking to buy your first AR, one for work or expand your collection, the Ruger SR-556 Carbine would be an excellent choice. 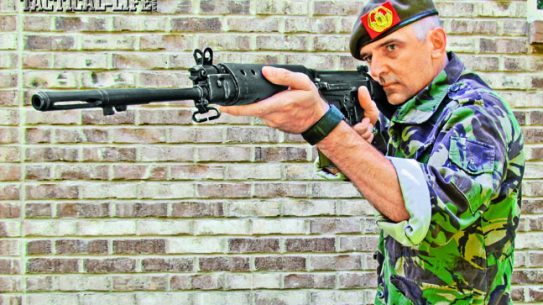 High-tech battle dress for soldiers of the world’s most powerful military!