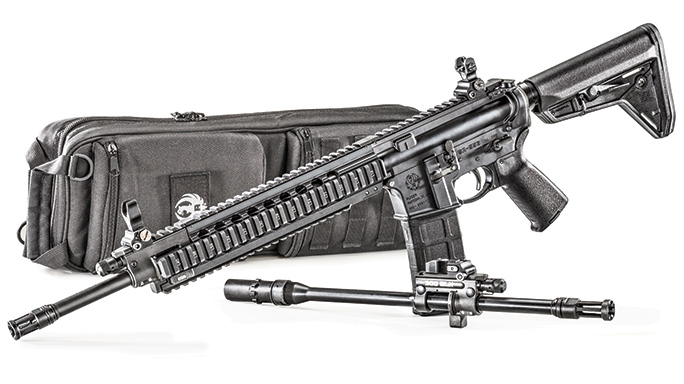 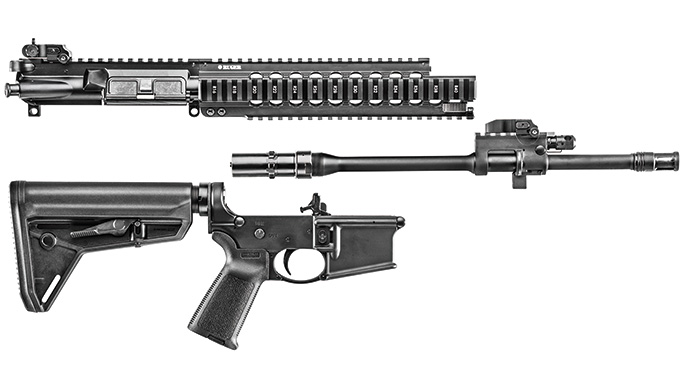 2 of 8
Photo by YAMIL SUED
Gun Review: Ruger’s SR-556 Takedown in 5.56, 300 BLK
The upper assembly is a single unit, and while the author tested a quad-rail model, a KeyMod handguard is now available. The barrel assembly includes the front sight to ensure accuracy after being disassembled. The SR-556 Takedown has a standard lower receiver with a Magpul MOE SL buttstock. 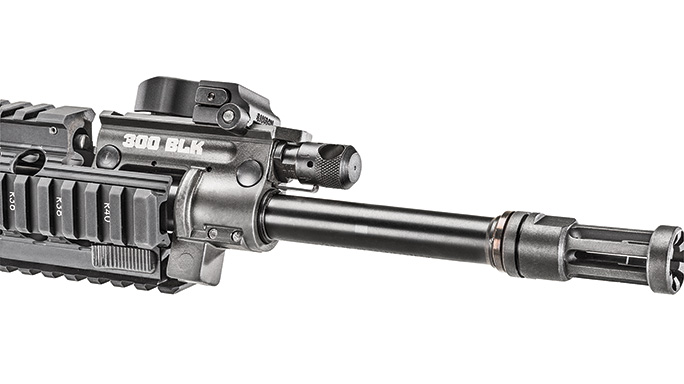 3 of 8
Photo by YAMIL SUED
Gun Review: Ruger’s SR-556 Takedown in 5.56, 300 BLK
Pulling on the locking tabs below the forend side rails allows you to turn the barrel assembly and slide it out. 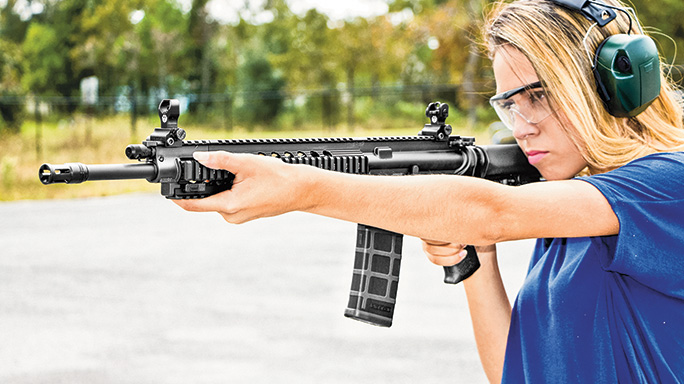 4 of 8
Photo by YAMIL SUED
Gun Review: Ruger’s SR-556 Takedown in 5.56, 300 BLK
Although slightly front-heavy, the SR-556 Takedown was still easy to maneuver on the range, and the long quad-rail handguard made it easy to obtain a far-forward grip. 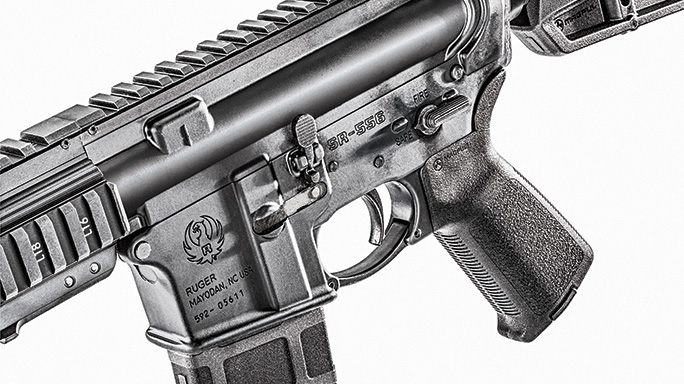 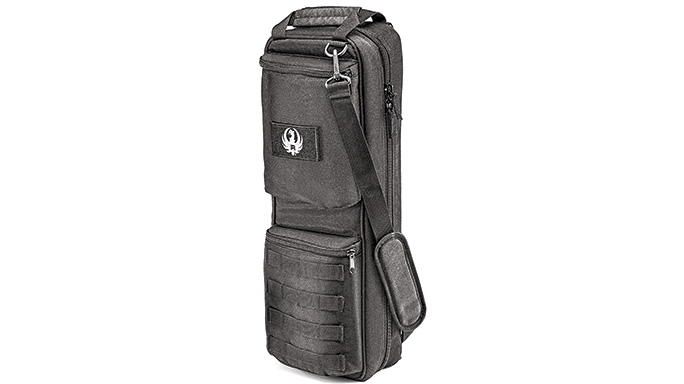 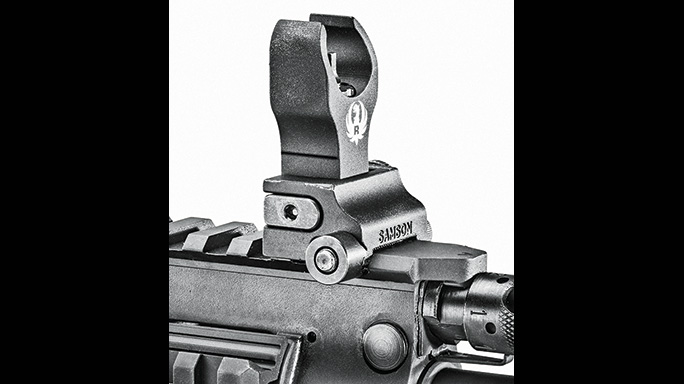 7 of 8
Photo by YAMIL SUED
Gun Review: Ruger’s SR-556 Takedown in 5.56, 300 BLK
The rifle comes with flip-up front and rear sights, and Ruger recommends making all adjustments on the front sight to maintain zero after barrel swaps. 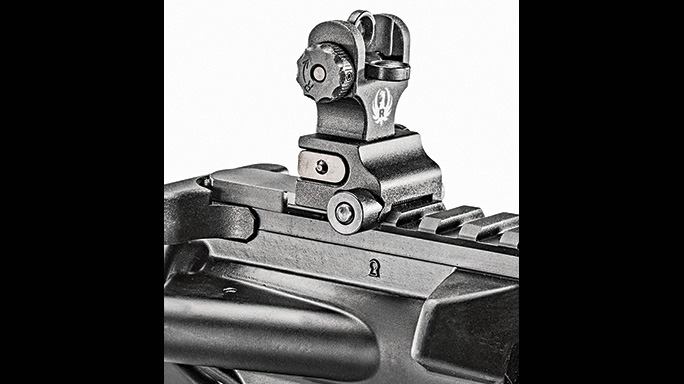 8 of 8
Photo by YAMIL SUED
Gun Review: Ruger’s SR-556 Takedown in 5.56, 300 BLK
The rifle comes with flip-up front and rear sights, and Ruger recommends making all adjustments on the front sight to maintain zero after barrel swaps. 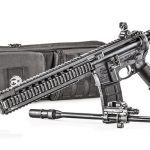 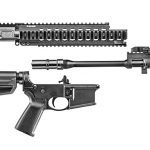 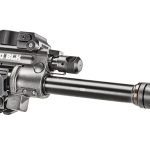 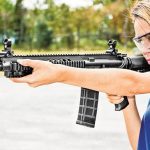 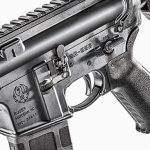 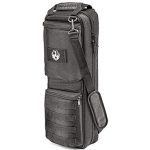 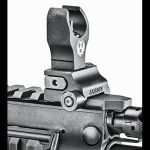 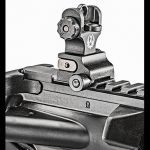 Takedown guns have always fascinated me. I suppose the ability to break something down into a more compact package yet quickly snap it back together when needed appeals to the frustrated craftsman in me. Over the years, several companies have made takedown rifles for camping and survival. However, none have appealed to me quite like the new SR-556 Takedown from Ruger.

This new AR-style rifle has the ability to swap calibers with the twist of a barrel and comes in a handy pack that can be carried into the wilderness or stowed out of the way until needed. Of course, this rifle sparked my imagination, and Ruger was kind enough to send me one for testing. I was not disappointed.

Ruger surprised a number of industry observers when the original SR-556 was released some six years ago. The rifle was a full-featured piston gun that carried a suggested retail price that put it toward the top end of the market at a time when there seemed to be a race to the bottom in terms of price and value. Pretty soon it became obvious that Ruger had a hit on its hands; shooters wanted a top-notch gun from a company they could trust. Since that time, additional models have been introduced, including the SR-556 Takedown.

Modeled after the original SR-556 in 5.56mm NATO, the new gun adds the ability to twist and remove the barrel in just a few seconds. When matched with a 300 Blackout kit, the owner can literally change the gun from 5.56mm to 300 BLK in about 30 seconds. To take the barrel off, simply lock the bolt to the rear, pull down on two tabs along the rails under the front sight assembly and twist the barrel about an eighth of a turn. The barrel can then be pulled out. To replace the barrel, reverse the process. It is extremely simple and easy to do.

The SR-556 Takedown uses a two-stage gas piston with a regulator that the shooter can use to tune the rifle to different ammunition and conditions. Ruger chrome plates the piston system. The system is designed to keep the gun cooler and cleaner, which should increase reliability with high-volume shooting.

Ruger installs a 16.1-inch, cold-
hammer-forged, 5.56mm NATO barrel in this gun. The barrel has a 1-in-8-inch twist rate that is useful for stabilizing a wide range of bullet weights. The end of the barrel sports 1/2×28 threading, and a Ruger flash suppressor comes installed. And while my test rifle had a quad-rail forend, Ruger is now offering the gun with a slimmer KeyMod forend.

Ruger also includes a set of folding sights with the gun: a front post and an aperture rear. The rear sight attaches to the Picatinny rail on the receiver while the front sight is attached to the barrel. When the barrel assembly is removed, the front sight goes with it. Ruger engineers intend that the shooter adjust the front sight for both windage and elevation so that the zero is maintained even when the shooter changes barrels.

As for furniture, the rifle features a Magpul MOE SL buttstock. This low-
profile stock is adjustable for length of pull and provides a solid point of contact when shouldered. Ruger also uses the Magpul MOE pistol grip. I’ve found that Magpul’s MOE pistol grips work very well for me, and they do not have the finger grooves that so many manufacturers seem to want to use. Rounding out the Magpul gear, Ruger includes three of the company’s ever-popular 30-round PMAGs. At a time when many companies are trying to maximize margins by only including a single magazine, the additional two are a nice touch.

Completing the package, Ruger includes three rail covers for the handguard and a soft carrying case. The case is a lot shorter than a standard rifle case, as it is intended to carry the gun when it is broken down. The case has two large, zippered pockets on the front that allow for the storage of magazines, ammunition or other gear. In practice, it would be easy to store this case behind a truck seat or in a trunk.

In addition to the rifle, Ruger shipped me a 300 Blackout conversion kit. The kit includes both a barrel assembly and two magazines marked as being for the larger caliber. When developed, the 300 Blackout was designed to work with standard 5.56mm NATO magazines. But having clearly marked, dedicated magazines can help a shooter avoid problems with trying to shoot the wrong ammuntion in the SR-556 Takedown. Thankfully, the carrying case has room enough to carry the gun and both barrel assemblies in addition to the magazines in the front pockets.

The SR-556 Takedown’s accuracy with 5.56mm ammunition was very good. Using the iron sights, sub-2-inch groups at 100 yards were fairly common. I tested loads with bullets weighing 53 to 62 grains, and all were solid performers. One of my favorite defensive choices, the 55-grain Hornady TAP Urban load gave the best five-shot group, which measured 1.38 inches. I have found this load to be accurate in a wide range of rifles that I have tested, and it performs well in the ballistic gel tests that I have seen. All of the 5.56mm loads were completely reliable in the Ruger SR-556 Takedown.

Switching to the 300 BLK barrel assembly, I tried both supersonic and subsonic loads. Gorilla Ammunition’s supersonic, 125-grain Sierra MatchKing (SMK) load ran at close to 2,200 fps and turned in excellent groups, just like the 5.56mm loads. The best five-shot 300 Blackout grouping match-ed the 5.56mm at only 1.38 inches.

As I mentioned earlier in this article, Ruger designed the front sight to allow for windage and elevation adjustments so that the zero would be maintained when swapping barrels. In theory, this makes sense. However, many theories fall apart when tested. So, I did just that. I sighted the rifle in with the 5.56mm NATO barrel then swapped out to the 300 BLK barrel. After sighting in the 300 BLK, I then returned to the 5.56mm NATO and shot a new group. As Ruger promised, the rounds were hitting where I intended. Swapping out once again to the 300 Blackout barrel assembly, I found those rounds struck paper right where they were supposed to. I don’t claim that this is a comprehensive test, but it is certainly enough to suggest the gun does indeed hold its zero when taken down and then reassembled.

Ruger equips the SR-556 Takedown rifle with its Elite 452 AR trigger, a two-stage unit with a 4.5-pound pull. I found the trigger to be a significant improvement over the basic two-stage triggers found on a lot of AR-style rifles. On some rifles, the first thing I want to do is drop in a quality aftermarket trigger. However, I cannot foresee any circumstance where I would want to swap out the Elite 452. The good news for existing AR rifle owners is that Ruger also sells the Elite 452 trigger separately. If you have a rifle with a typical GI-type trigger, this is a reasonably priced upgrade that will fit all mil-spec lowers.

As I’ve come to expect in all of Ruger’s rifles, the SR-556 Takedown is a quality weapon that earns its asking price. The gun is a high-quality build, and it does everything it claims with 100-percent reliable functioning. The features are well thought out, and the takedown system works very well.

As a survival rifle tucked under the seat of a bush plane, a pilot could do much worse than the SR-556 Takedown—especially when the 300 BLK conversion is riding shotgun to the standard 5.56mm NATO. Likewise, for anyone who might need a rifle when space is at a higher premium than speed, this gun can make a lot of sense. Of course, if you are like me and have no actual need for the takedown feature but think it is a very cool system, you can still pick one up for the simple reason that you want it. There is no better reason than that. You won’t be disappointed. 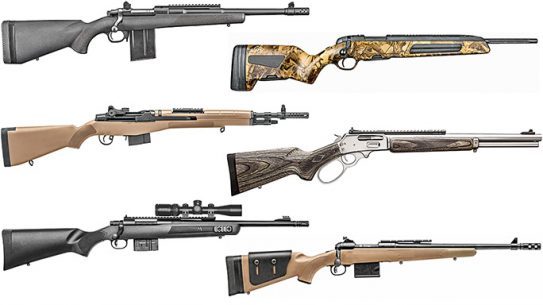