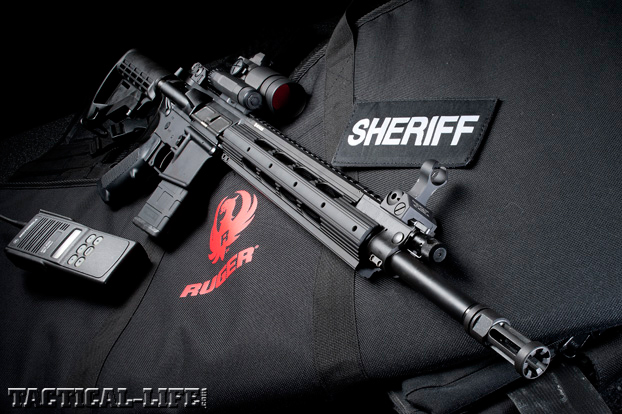 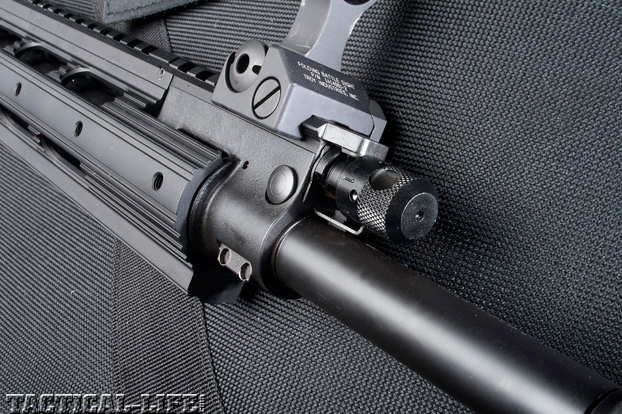 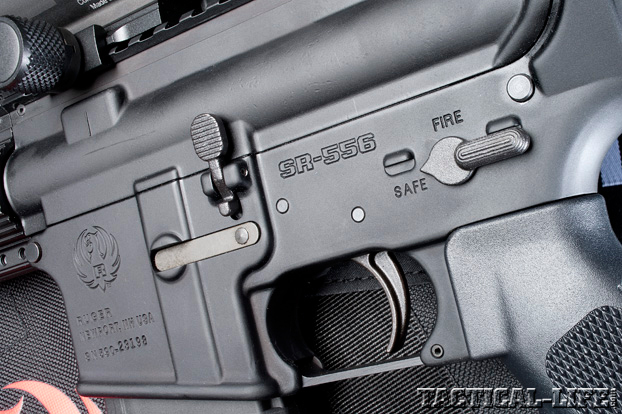 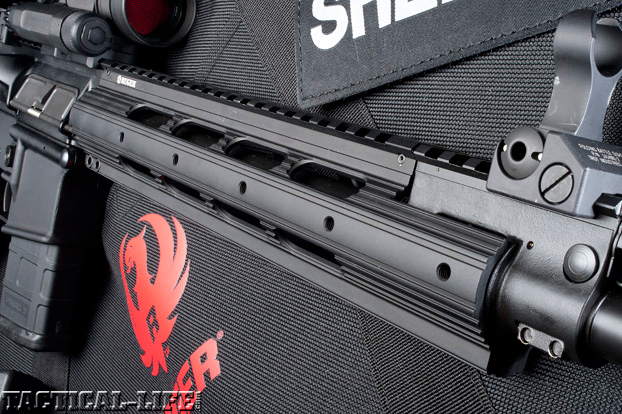 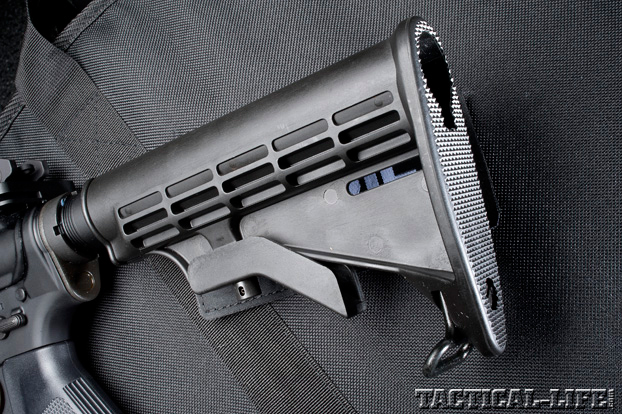 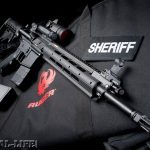 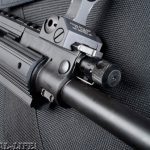 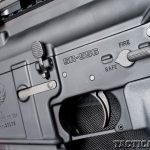 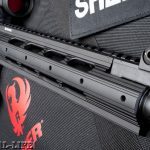 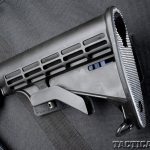 Sturm, Ruger & Company has long been associated with sporting and recreational firearms. Many Americans think of Ruger as the guns bought at the local hardware store and used on the farm, ranch or the local gun club. And while this is true, Ruger also manufactures firearms that have been used in conflict around the world. A great example of this is the early Mini-14. Ruger manufactured this gun in a select-fire version with a short barrel and folding stock (the AC-556) and it was used by the Royal Irish Constabulary to great effect during the “troubles” that plagued their country in 1970s and 80s.

The Mighty Mini
Since its introduction in 1974, the Ruger Mini-14 Tactical has become one of the most popular self-loading rifles in history. Taking a moment to view the compact rifle, you can easily see the similarity between the Ruger Mini-14 Tactical and the classic M14 battle rifle. In reality, this is not a coincidence. Designers L. James Sullivan and William B. Ruger studied the inner workings of the M14 to determine what was right about the proven design and incorporated that into their carbine version. Along the way, several innovations and engineering modifications were added to enhance the design.

The first versions of the Ruger Mini-14 Tactical were chambered for the popular 5.56mm NATO round, and this sleek, light, handy rifle became an instant hit with law enforcement, ranchers, farmers and anyone who needed quick access to a long gun. More recently, the Ruger Mini-14 Tactical has been chambered for the 7.62x39mm in what is called the Mini-30. A version in both select-fire (the AC-556 mentioned above) and semi-auto (F30GB) with a folding stock and pistol grip has also been manufactured, the latter being the choice of my agency’s SWAT team when it was formed in 1980.

Around 2003, Ruger began to revamp production of the Ruger Mini-14 Tactical in a very significant way. The gas system was modified, new sights were offered and the new Minis were built to much tighter tolerances. At this time, Ruger also noted that many police departments were exploring the concept of a patrol rifle and felt their upgraded rifle could fill that niche. Ruger Mini-14s optimized for the patrol mission are now available. Perhaps the best news of all is that these rifles are equipped with a re-contoured, flanged barrel that is heavier than the original in an effort to achieve better accuracy. Several different law enforcement configurations are now offered, including some with M4-style collapsible stocks.

Superior SR Series
The growing popularity of the AR-15 platform was not lost on Ruger, but they wanted to create something different from the norm. The Ruger SR-556E autoloading rifle is an innovative two-stage piston-driven rifle that offers reliability and ruggedness with piston-driven performance. The piston-driven Ruger SR-556E runs cleaner, cooler and is easier to maintain than direct impingement rifles, offering significantly improved reliability. The two-stage piston-driven operating system in the Ruger SR-556E provides a smooth power delivery stroke to the action and vents combustion residue out of the bottom of the gas block. The four-position adjustable gas regulator allows the operator to tune the rifle to specific ammunition and rifle conditions, minimizing recoil and maximizing reliability and long-term endurance. Reliability is further enhanced by a one-piece bolt carrier with an integral transfer key.

The Ruger SR-556E also has all the features AR shooters want. Designed for long-lasting accuracy, the heavy-contour, 16.12-inch chrome-lined barrel is cold-hammer-forged from mil-spec 41V45 chrome-moly-vanadium steel. The barrel has a 1-in-9-inch twist rate and is capped with an AC-556 flash suppressor. Chambered in 5.56mm NATO, the Ruger SR-556E also fires .223 Remington ammunition. A one-piece, 10-inch Troy Industries Quad Rail Handguard provides ample room for mounting sights, optics and accessories. Made exclusively for Ruger, this SR-556-specific handguard is pinned to the upper receiver and provides a rigid mount for the piston-driven transfer rod.

The Ruger SR-556E is also equipped with Troy Industries Folding Battle Sights. These rugged, high-quality sights co-witness with mil-spec optics, and can be easily removed or replaced. The sights can be folded down with the push of a button or quickly flipped up with your thumbs. The windage-adjustable rear sight includes an instantly converted short- and long-range aperture, and the protected front sight is elevation adjustable. Also included is a six-position collapsible M4-style buttstock that houses a mil-spec buffer and spring.

Durability and performance of the SR-556 is enhanced with the use of high-performance finishes; The barrel and gas block are chrome-lined, while the bolt, bolt carrier and extractor are chrome-plated. The piston-driven transfer rod is electroless nickel/Teflon coated. The flash suppressor and the exterior of the barrel, gas block, and regulator are manganese-phosphate coated. All aluminum parts are mil-spec hardcoat anodized. The standard lower receiver is built with mil-spec components, including a single-stage trigger. The lower receiver is compatible with AR-style magazines, grips, buttstocks, and fire control components.

Essential SR-556
Ruger looked at what accessories well-informed end-users purchased for their gun and decided to let them choose what was best on a Ruger SR-556E. Thus, the SR-556E (Essential) is a carbine shipped from the factory with only those essential features you need to build your gun the way you want it. By doing so, Ruger is able to reduce the cost of the gun, which will lead some to believe that “E” stands for “Economy.”

The Ruger SR-556E comes equipped with a new, lightweight, adaptable handguard that provides multiple options for mounting optics and other accessories. This new, round handguard features a full-length Picatinny rail at the 12 o’clock position, which aligns with the rail on the flattop receiver. The handguard also accepts sections of rail or handguard covers, which allow the user to configure the handguard to their exact requirements.

The Ruger SR-556E still offers the basic features that make the Ruger SR-556 family a success. The two-stage piston operating system runs cooler and cleaner than direct impingement rifles, and the multi-stage regulator allows the operator to tune the rifle to their specific ammunition. The cold-hammer-forged 41V45 barrel provides outstanding accuracy and longevity. The barrel is threaded 1/2-28 and is capped with the Ruger flash suppressor.

Ruger has really filled the bill in regards to rifles that can “work the street” or be battlefield capable. While they are still proud of their “Mom and Pop hardware store” image, they also make guns for serious situations. 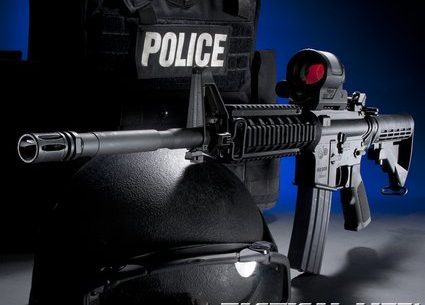 Sturm, Ruger & Company has long been associated with sporting and recreational firearms. Many…