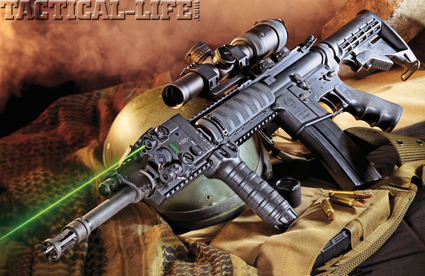 A little more than a year after Ruger introduced the piston-driven SR556 in 5.56 NATO, they added the Ruger SR556/6.8—a new chambering in the two-stage, piston-driven, AR-style rifle that offers the power and downrange authority of the 6.8 SPC cartridge. shown here with a Vortex Razor HD 1-4×24 riflescope, Tangodown vertical foregrip and a Laser Devices DBAL-A2.

When faced with a gunfight, it’s pretty much a given that bringing enough firepower to stop an adversary often decides who lives and dies. Nearly two decades ago when NATO forces went hot in Somalia, drugged-up combatants soaked up 5.56mm rounds like sponges. American forces encountered bullet-riddled Somalis that all too frequently stayed in the fight, with dire consequences. Illicit drug use among enemy combatants isn’t localized to East Africa, and law enforcement officers are all too often faced with situations where deadly force must be applied with the force of a sledgehammer rather than a scalpel. 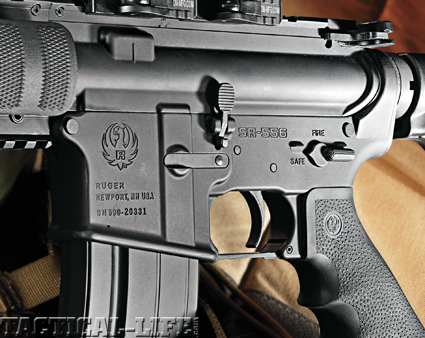 The fire control group is single-stage with about 1/16th inches of creep, and the trigger breaks at 6.1 pounds. Controls are all standard AR-style.

The 12 gauge shotgun loaded with slugs has been law enforcement’s “hammer” for a century, but range limitations and magazine capacities beg for a better solution. When the 6.8 SPC round hit the market a few years ago, it addressed several problems dealing with terminal ballistics and fight-stopping power. Ruger’s introduction of the SR556 chambered in 6.8 SPC may be just what law enforcement agencies need when they start looking for an upgrade in armament when compared to the 5.56 standard.

6.8 SPC Development
The 6.8mm SPC cartridge was designed to address the deficiencies of the terminal performance of the 5.56x45mm NATO cartridge currently in service with the U.S. Armed Forces. The development of this cartridge is unusual and interesting in that actual operators in the armed forces, instead of “industry professionals,” designed it. The cartridge was the result of the Enhanced Rifle Cartridge program. Participating in the program were U.S. Special Operations soldiers, as well as gunsmiths from the United States Army Marksmanship Unit. The goal was to create a cartridge that would bridge the gap between 5.56mm and 7.62x51mm NATO. 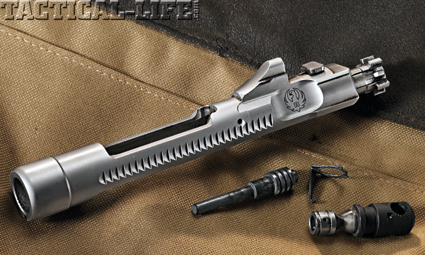 The bolt, as well as the one-piece bolt carrier and extractor, are chrome-plated for improved durability. 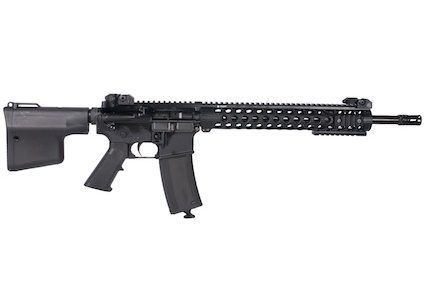 A little more than a year after Ruger introduced the piston-driven SR556 in 5.56…