With classic Western styling and an economical price tag, the original Ruger Wrangler has been a top seller since its introduction in 2019. It has many of the same features as more expensive single-action revolvers, but modern technology, production materials and finish options allow the Wrangler to fit in with almost any budget. Coupled with the low cost of the gun is the relatively inexpensive ammunition. Even with today’s supply chain restrictions and ammo shortages, the .22 LR cartridge is still a bargain and fairly easy to find on sporting goods and gun dealer’s shelves. Initially, the Wrangler was offered with a 4.62-inch barrel and “plow-handle” square-butt grip panels and frame. Finishes were black, silver and burnt bronze Cerakote—all having a black oxide, six-shot cylinder, and black, checkered, two-piece, synthetic grips. Now, you can get the Ruger Wrangler Birdshead with a shorter barrel and smaller grip frame configuration. 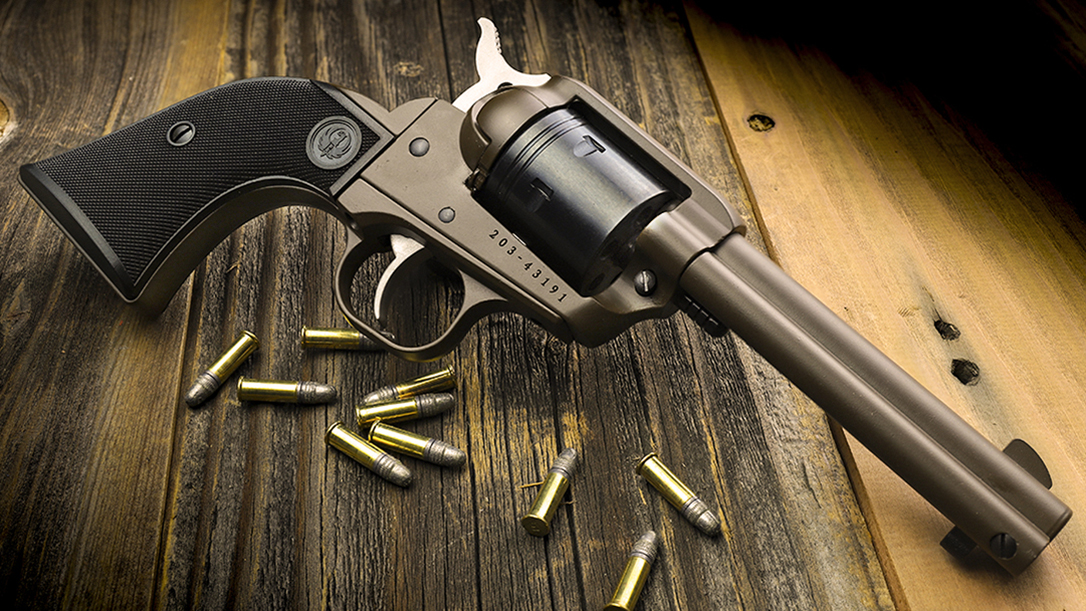 Cowboy Up With the Davidson’s Exclusive Ruger Wrangler Revolver

The Wrangler has basically the same dimensions as Ruger’s .22 Single-Six, which was introduced in 1953 when Westerns ruled on TV and the silver screen. A big difference between the Single-Six and the Wrangler is that Ruger’s newest .22 six-shooter has a zinc-alloy grip frame mated to an aluminum alloy frame. This reduces both the cost and the weight. The cold hammer forged barrel results in ultra precise rifling that provides exceptional accuracy.

The Wrangler is 3.75 inches in length with a full-length ejector rod housing. The unfluted steel cylinder has six recessed chambers and sports a black oxide finish. Three finish options are available on the Wrangler: black, silver or burnt bronze Cerakote. I liked the looks of the silver Cerakote with the black cylinder and chose it as a test gun. The cerakote finish provides rugged reliability in all environments The birdshead grips are black synthetic and embellished with the Ruger Eagle emblem and a border-type outline, but within the said outline, there’s no checkering or texturing.

Like all new-model Ruger SA revolvers since 1973, such as the Ruger Blackhawk, the Wrangler has a transfer-bar system, so all six chambers can be safely loaded. The transfer bar mechanism and loading gate interlock provide an unparalleled measure of security against accidental discharge. With the gate open the cylinder is allowed to spin freely in either direction for loading/unloading. The action is powered by a coiled mainspring; the stainless-steel hammer and trigger are both metal injection-molded.

The checkering on the hammer spur is molded in and the smooth-faced trigger is 0.29 inches in width. The trigger pull weight on my sample was about 4.5 pounds and fairly crisp. The sights on the Wrangler are fixed. A square notch rear sight is molded into the topstrap, and the blade front sight is rounded and 0.70 inches in width. My Wrangler had a crescent-type ejector rod head that is finished in black oxide, along with the pins in the frame. This makes for a pleasing contrast, and I’ll give the Wrangler good marks for overall fit and finish.

Preparing to Review the Wrangler

My ammo locker yielded five varieties of .22 LR cartridges. First from CCI was a somewhat aged box of Green Tag competition cartridges with a 40-grain solid bullet at standard velocities. Then there were newer CCI Mini Mags that have a 40-grain segmented HP bullet driven at high velocity. There was also a box of Ruger-branded CCI ammo billed as standard velocity target with a 40-grain solid bullet. An unusual loading was Remington-branded Eley Match EPS rounds with a 40-grain solid bullet. Lastly, I included Winchester’s Varmint LF, which has a 26-grain tin-covered HP bullet with a factory velocity rating of 1,650 fps. These light-bullet .22 rimfire loadings have recently become popular as self-defense rounds, so I was interested to see what they’d do out of the Wrangler’s 3.75-inch barrel.

Because the Wrangler is all about Old West styling, it would have to be packed in an Old West leather rig. Rummaging through my cowboy holster and belt collection, I came up with a shuck from El Paso Saddlery that has served me well with .22 SA revolvers over the years. Called the 1890 “Original” Holster, it’s been cataloged by El Paso Saddlery and its predecessor for some 130 years.

It has seen use by none other than Texas Ranger Capt. John R. Hughes and El Paso Constable “Old” John Selman. It has a broad skirt but isn’t exactly a Mexican Loop as the holster barrel is secured to the skirt by a tapered leather band that is riveted at the back of the skirt. It’s an open-top design that encloses the triggerguard and comes standard with a hammer thong. My holster is finished in a russet brown and decorated with border stamping.

On the Range with the Ruger Wrangler Birdshead Model

It’s usually no fun to try and do gun tests outdoors in mid-winter. Add to this, trying to coordinate a day with my son/photographer when he doesn’t have to work and there’s reasonable weather. Range day started with drizzling rain and mild temperatures, but as time went on, the rain increased, and the temperature dropped 15 degrees. Well pilgrim, a man’s gotta do what a man’s gotta do!

I decided to shoot using a 6 o’clock hold on the orange aiming circle of the target. I soon discovered that the dull-silver front sight was playing tricks with my 67-year-old eyes, so I used a black Sharpie marker to dull the rear surface. As I’d mentioned earlier, the trigger was pretty decent, which helped a bit in the accuracy department. By this time the rain was starting to blow under the bench’s roof and the temperature was falling. The targets, however, stayed reasonably dry. We’d erected a pop-up canopy tent and placed it over top of the target stand to protect the paper targets.

My best group measured 1.68 inches using the CCI Mini Mag segmented HP cartridges. Point-of-impact was just left and a bit above the point-of-aim. Second place went to the Ruger/CCI target ammo with a 1.91-inch group. Taking all the group averages together gave a collective total of 2.22 inches. Not bad for a SA sixgun with a short barrel and fixed sights. I have to note that the Winchester Varmint LF load had to be dropped from the test. The 26-grain bullets had an average velocity of 1,204 fps, but out of 15 shots, all but six key-holed and impacted all over the target. Could be they stabilize better in a rifle-length barrel? Quien sabe?

I like the Ruger Wrangler with the birdshead grips. It fits well in my medium-sized hand and is easy to cock one-handed. I got over the fact that the grips had no checkering. I like the compact size and the looks of this version of the Wrangler. It reminds me of the Colt Lightning revolver. Stampings and marking on the Ruger Wrangler Birdshead are kept to a minimum.

Plinking at steel with the Wrangler was limited due to the weather. However, it pointed naturally and was fast on target. Hits at 7 to 10 yards shooting Duelist style were easy. My only complaint was when unloading there’s no indexing point. Traditional SA revolvers let you know the chamber is lined up with the ejector rod. You pretty much have to visually line it up and hold the cylinder in place. Then, punch out each empty case. There’s not much “wiggle-room,” and sometimes you jab the end of the ejector rod into the steel between the chambers.

Reviewing the Single Action Shooting Society (SASS) Shooters Handbook, Version 26.2 (01-01-22), it appears to me that the compact version of the Wrangler would be allowable in the Buckeroo/Buckerette kid’s shooting categories. Its lightweight and good handling characteristics make it natural for young hands. I’d also think that it would be useful for any competitor during .22 rimfire side matches. It’s also just a plain, fun plinking gun that will give you years of service. Best of all, you get a well-made, attractive (IMHO) sixgun at a price almost any wrangler can afford. The listed MSRP is $279, but the street price will probably shave a good chunk off that. Ruger, once again, you done good! For more information, visit ruger.com and epsaddlery.com.

If you enjoyed this article, you can purchase the magazine it was originally printed in. Guns of the Old West Summer 2022 is available now.